Russia appears to be preparing for another large-scale air attack on Ukraine with dozens of bombers spotted massing at a key airbase.

Two dozen Tu-95 and Tu-160 long-range bombers have gathered at Engels-2 air base, near the city of Saratov, alongside fuel tanks, support vehicles, and repair supplies.

The attack will almost certainly focus on destroying Ukraine’s already-battered power and water network which has been pounded by cruise missiles and Iranian-made kamikaze drones in recent weeks, leaving people freezing in their homes.

Images of the airfield were captured on November 28 and first published by Germany’s Der Spiegel.

Arda Mevlutoğlu, a military analyst, told the magazine: ‘The unusually high number of bombers on the tarmac is an indication of an increase in operations, if not an imminent large-scale attack.’

Ukraine has been bracing for more Russian air strikes with at least two country-wide air raid alerts issued this week that were subsequently called off.

He told viewers in his nightly address: ‘We understand that the terrorists are planning new strikes. We know this for a fact.

‘And as long as they have missiles, they, unfortunately, will not calm down. 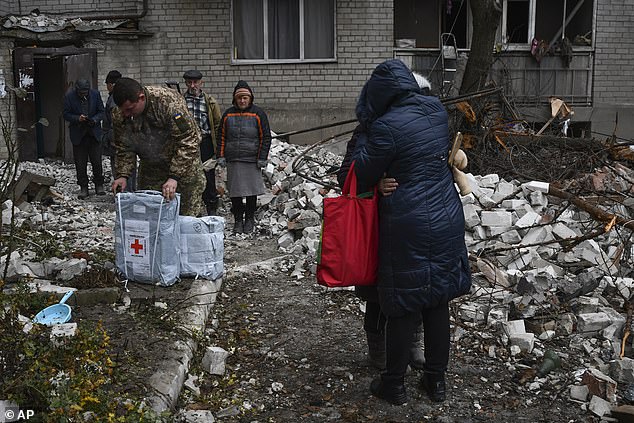 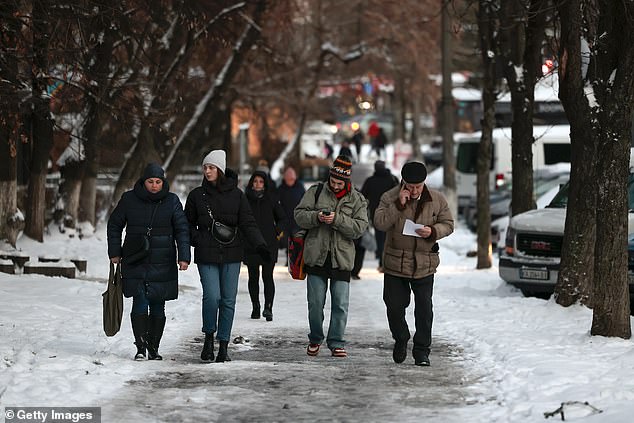 Winter is now beginning in Ukraine with temperatures regularly dropping below freezing leaving people shivering in their homes (pictured, snow in Kyiv on Wednesday)

Zelensky said the coming week could be as difficult as the previous week, when attacks on electricity infrastructure subjected Ukrainians to the most acute power cuts since Russian troops invaded in February.

‘Our defence forces are getting ready. The entire country is getting ready,’ he said. ‘We have worked out all the scenarios, including with our partners.’

NATO leaders are currently meeting in Romania to discuss the next phase of support for Ukraine, with advanced missile defences top of the agenda.

Jen Stoltenberg, head of the alliance, and US officials have suggested talks are ongoing to give Patriot anti-air defences to Kyiv.

The missile batteries are adept at shooting down incoming rockets but are complex and difficult to operate, meaning they are often supplied with an experienced crew.

For example, when Germany has lent Patriot batteries to Slovakia and Turkey in the past they have also supplied men to operate the weapon.

That complicates the picture in Ukraine, due to fears Russia would try to target the Patriots and could end up killing NATO personnel potentially sparking war between global super-powers. 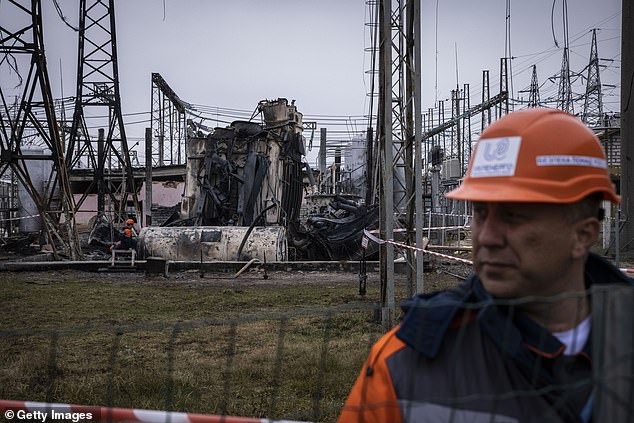 Ukraine has called on allies to urgently supply air defence systems that can be used to protect its critical infrastructure, or else risk a fresh refugee crisis

Dmitry Medvedev, former Russian president and now head of the security council, warned yesterday that NATO would be making itself a ‘legitimate target’ by supplying the weapons.

He wrote on Telegram: ‘If… NATO supplies Kyiv fanatics with Patriot complexes along with NATO personnel, they will immediately become a legitimate target…

‘I hope the Atlantic impotents understand this.’

Kyiv says around 50 per cent of its energy infrastructure is damaged including a third of its power generating capacity, leading to blackouts across the country.

Entire cities, including the capital Kyiv, are being plunged into darkness for hours or days at a time even as temperatures fall below freezing.

Mr Stoltenberg has accused Putin of trying to ‘weaponise winter’ and spark a new wave of refugees into Europe after failing to achieve victory on the battlefield.

Never-the-less, Ukraine’s Western allies have vowed to keep supporting the country for ‘however long it takes’ to achieve victory.