Immunotherapy treatments without side effects ARE possible, study says

Immunotherapy – leveraging our immune system to fight cancer – is possible with fewer side effects, according to a new study.

Drugs given to arthritis patients to help stop inflammation – called TNF alpha inhibitors – could stop adverse reactions to the cancer treatment, they say.

Depending of the type of immunotherapy received, side effects include breathing difficulties, muscle aches, swelling, weight gain and headaches – and can range from mild to life-threatening.

There are many different types of immunotherapy, ranging from monoclonal antibodies, CAR T-cell therapy, checkpoint inhibitors and vaccines.

Although immunotherapy has revolutionised cancer treatment in recent years, it can cause dangerous inflammatory reactions in healthy tissues, leading to discontinuation of treatment.

The study, published in Science Immunology, has been led by experts at the University of Geneva (UNIGE) and Harvard Medical School.

‘When the immune system is activated so intensively, the resulting inflammatory reaction can have harmful effects and sometimes cause significant damage to healthy tissue,’ said study author Professor Mikaël Pittet at UNIGE.

‘Therefore, we wanted to know if there are differences between a desired immune response, which aims to eliminate cancer, and an unwanted response, which can affect healthy tissue.

‘The identification of distinctive elements between these two immune reactions would indeed allow the development of new, more effective and less toxic therapeutic approaches.’

The team used liver biopsy samples from cancer patients who had suffered toxic reactions to immunotherapy.

Studying the cellular and molecular mechanisms at work to reveal similarities and dissimilarities.

In an immunotherapy-related toxic response, two types of immune cells – macrophage and neutrophil populations – appear to be responsible for attacking healthy tissue, but are not involved in killing cancer cells.

In contrast, another cell type – a population of dendritic cells – is not involved in attacking healthy tissue but is essential for eliminating cancer cells.

‘Immunotherapies can trigger the production of specialised proteins that alert the immune system and trigger an inflammatory response,’ said Professor Pittet.

‘In a tumour, these proteins are welcome because they allow the immune system to destroy cancerous cells.

‘In healthy tissue, however, the presence of these same proteins can lead to the destruction of healthy cells.

‘The fact that these inflammatory proteins are produced by such different cells in tumours and healthy tissue is therefore an interesting finding.’

Dendritic cells are very rare, whereas macrophages and neutrophils are much more common.

Some macrophages are present in most of our organs from embryonic development stages and remain there throughout our lives.

Contrary to what was previously thought, these macrophages do not necessarily inhibit inflammation.

But when stimulated by immunotherapies, they can trigger a harmful inflammatory response in the healthy tissue where they reside. 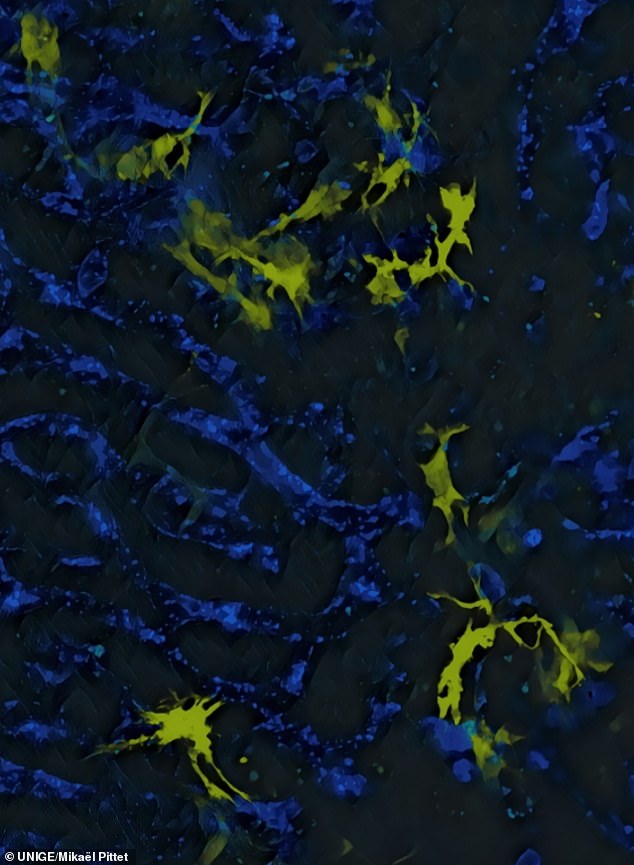 immunotherapy is not without side effects. In this image the University of Geneva are liver macrophages, or Kupffer cells (yellow), which secrete the IL-12 protein that causes adverse effects of immunotherapy. In blue, blood vessels

When macrophages are activated by drugs, they produce inflammatory proteins, which in turn activate neutrophils, which execute the toxic reaction.

‘This opens the possibility of limiting immunotherapy’s side effects by manipulating neutrophils,’ said Professor Pittet.

The research team confirmed their discovery by studying the immune reactions of mice whose cell activity was modulated with genetic tools.

They were able to identify a loophole that could be exploited to eliminate these side effects.

TNF alpha inhibitors are already used to modulate the immune response in people with arthritis, so researchers think they could be used to inhibit toxic effects of neutrophils during immunotherapy.

‘Furthermore, inhibiting neutrophils could be a more effective way to fight cancer – in addition to triggering a toxic response, some of these cells also promote tumour growth,’ said Professor Pittet.

‘Thus, by managing to control them, we could have a double beneficial effect – overcome the toxicity in healthy tissues, and limit the growth of cancerous cells.’

HOW DOES IMMUNOTHERAPY WORK?

It works by harnessing the immune system recognise and attack cancer cells. It is normally given via an IV drip.

Some types of immunotherapy are also called targeted treatments or biological therapies.

One might have immunotherapy on its own or with other cancer treatments.

The immune system works to protect the body against infection, illness and disease. It can also protect from the development of cancer.

Normally, it can spot and destroy faulty cells in the body, stopping cancer developing. But a cancer might develop when:

Cancer treatments do not always fit easily into a certain type of treatment.

For example, a type of immunotherapy called checkpoint inhibitors are also described as a monoclonal antibody or targeted treatment.

This treatment changes the genes in a person’s white blood cells (T cells) to help them recognise and kill cancer cells.

It is available as a possible treatment for some children with leukaemia and some adults with lymphoma.

People with other types of cancer might have it as part of a clinical trial.

MABs recognise and attach to specific proteins on the surface of cancer cells.

Antibodies are found naturally in our blood and help us to fight infection. MAB therapies mimic natural antibodies, but are made in a laboratory.

Monoclonal means all one type. So each MAB therapy is a lot of copies of one type of antibody.

MABs work as an immunotherapy in different ways. They might do one of the following:

MABs trigger the immune system by attaching themselves to proteins on cancer cells.

This makes it easier for the cells of the immune system to find and attack the cancer cells.

Cancer can sometimes push a stop button on the immune cells, so the immune system won’t attack them.

Cytokines are a group of proteins in the body that play an important part in boosting the immune system.

Interferon and interleukin are types of cytokines found in the body. Scientists have developed man made versions of these to treat some types of cancer.