Impact of the western settlers on Native Americans revealed in new colorized pictures: Poignant photos from the 1880s and 1890s show the early days of Euro-Americans’ move onto tribal lands in South Dakota and Wyoming

Newly colorized photos show the impact of the western settlers on Native Americans and the consequent upheaval of hundreds of indigenous tribes.

The poignant images, taken by photographer John C.H. Grabill between 1887 and 1892, show the early days of Euro-Americans as they move to South Dakota and Wyoming and how this affected the area’s indigenous communities.

In one photograph, three Cheyenne men wearing ceremonial clothing and holding a rifle greet a settler who was wearing a suit and accompanied by his interpreter.

Another image showed a group of Euro-American men and Lakota men, who belonged to either the Brule, Miniconjou or Oglala subtribes, posing in front of a tipi. This photo captured the moment U.S officials and Native American chiefs came together for a moment of peace.

Others showed three teenage boys sat in western clothing who were known as ‘Uncle Sam’s Pets’ and only got fed rations every 29 days, and a man from the Oglala subtribe as he stood with two U.S soldiers whilst cradling a cannon located in a military camp.

John C.H. Grabill’s photographs also show the Lakota Sioux community living near or on the Cheyenne River, where they came into contact with the U.S military.

Some of the photographs featured are thought to only be taken just days after the Wounded Knee massacre in 1890, which was one of the final chapters in America’s long war with Native Americans and resulted in the death of nearly 300 Lakota people. 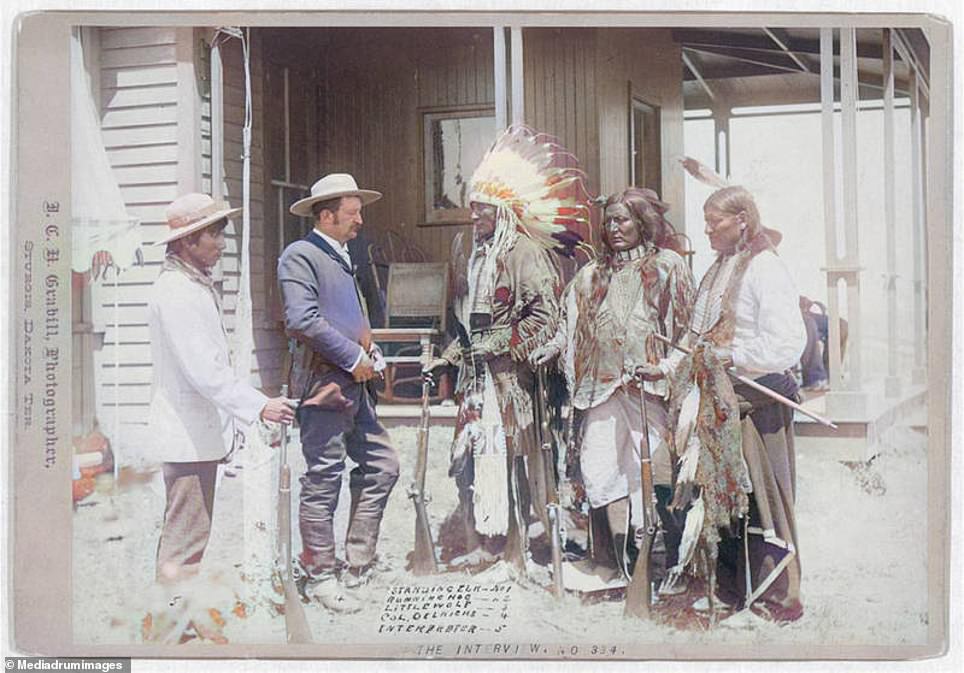 Three indigenous men – otherwise known as Cheyenne men – wore ceremonial clothing and each held a rifle as they greeted a Euro-American man of western civilization who wore a suit and was accompanied by his interpreter. The expansion of settler territory and the founding and growth of the U.S. meant Native American communities were moved 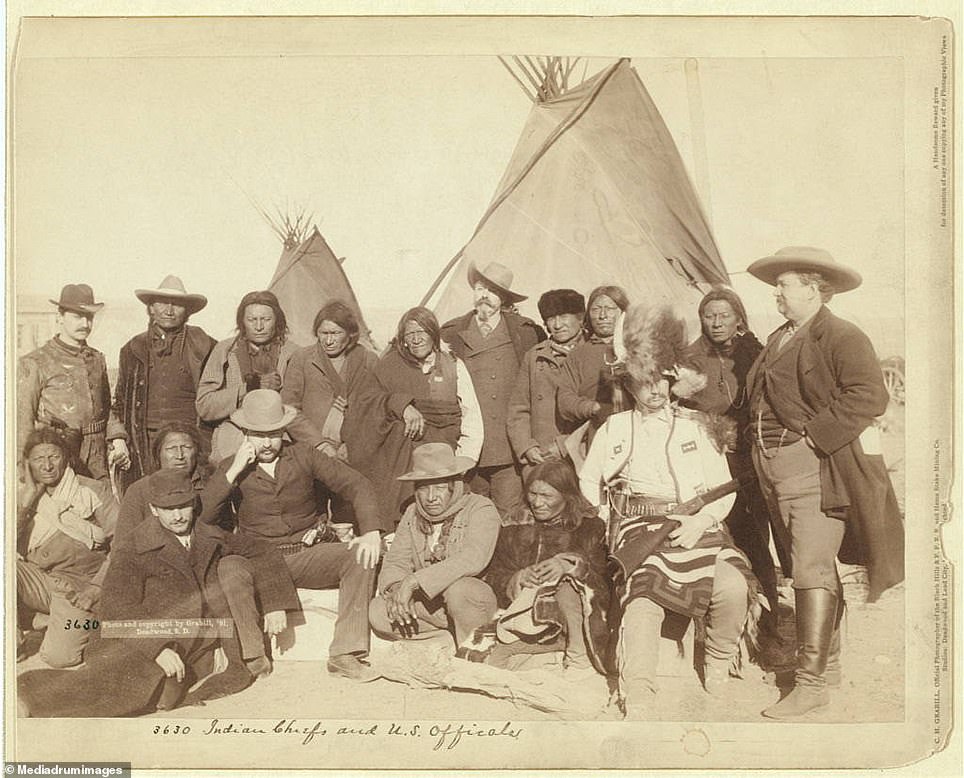 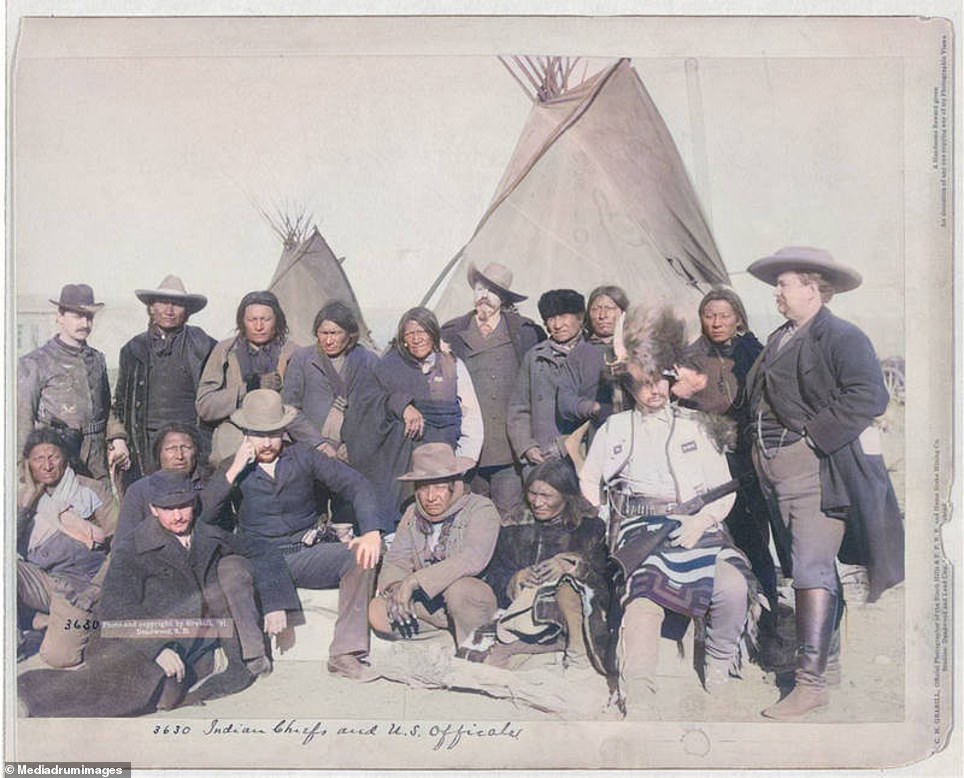 Another image showed a group of Euro-American men and Lakota men, who belonged to either the Brule, Miniconjou or Oglala subtribes, posing in front of a tipi. This photo captured the moment U.S officials and Native American chiefs came together for a moment of peace 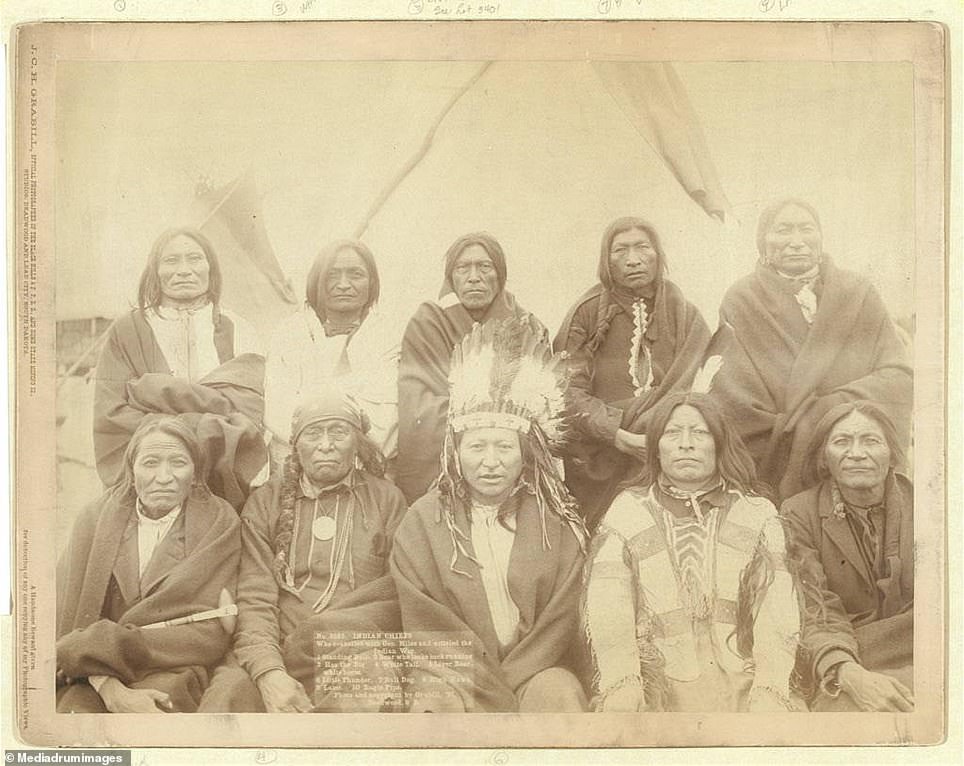 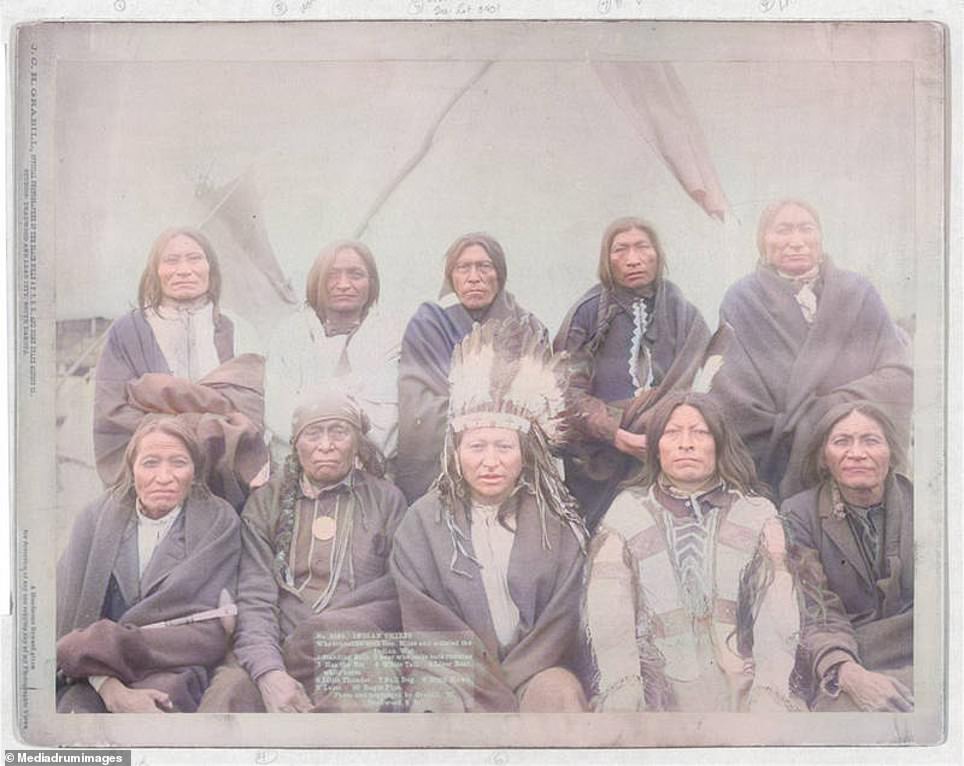 The Lokota chiefs are pictured in a group portrait near the Pine Ridge reservation in 1891. The chiefs negotiated with General Nelson Appleton Miles and settled the Indian War. This picture will have been taken after the 1890 Wounded Knee Massacre, where nearly 300 Lakota people were killed by the US army. The Lakota were known to be fierce warriors, with battles such as the Little Bighorn still legendary to this day, and going to war was seen as a rights of passage for Sioux men. However, they were also a very spiritual people and their lives were centered around their families with the raising of children of the up-most importance 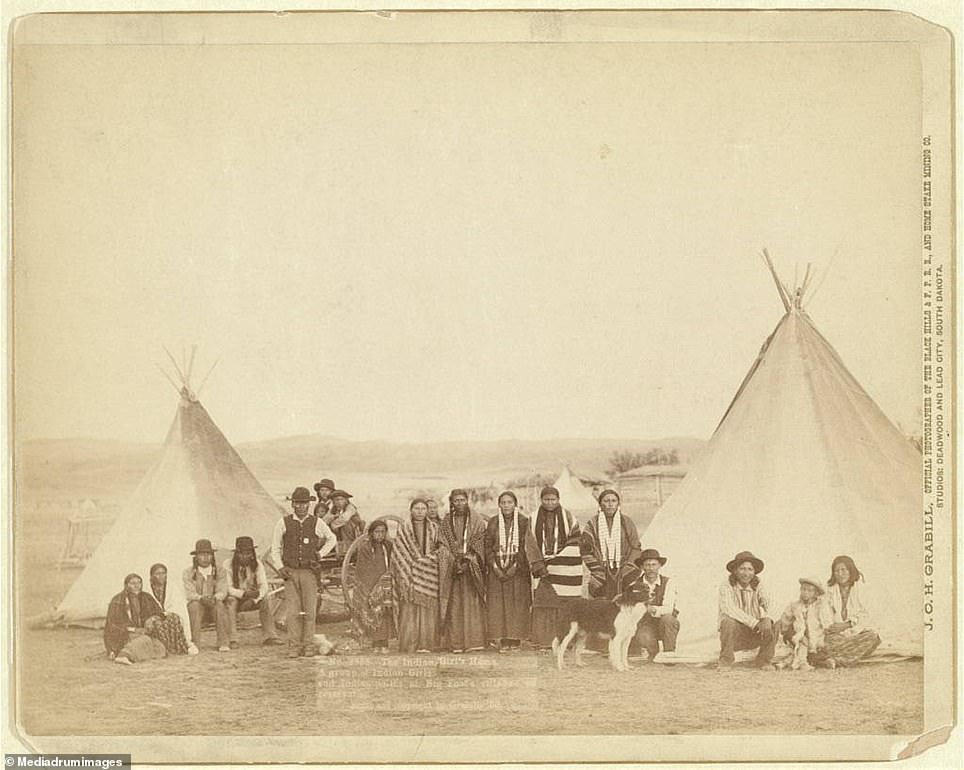 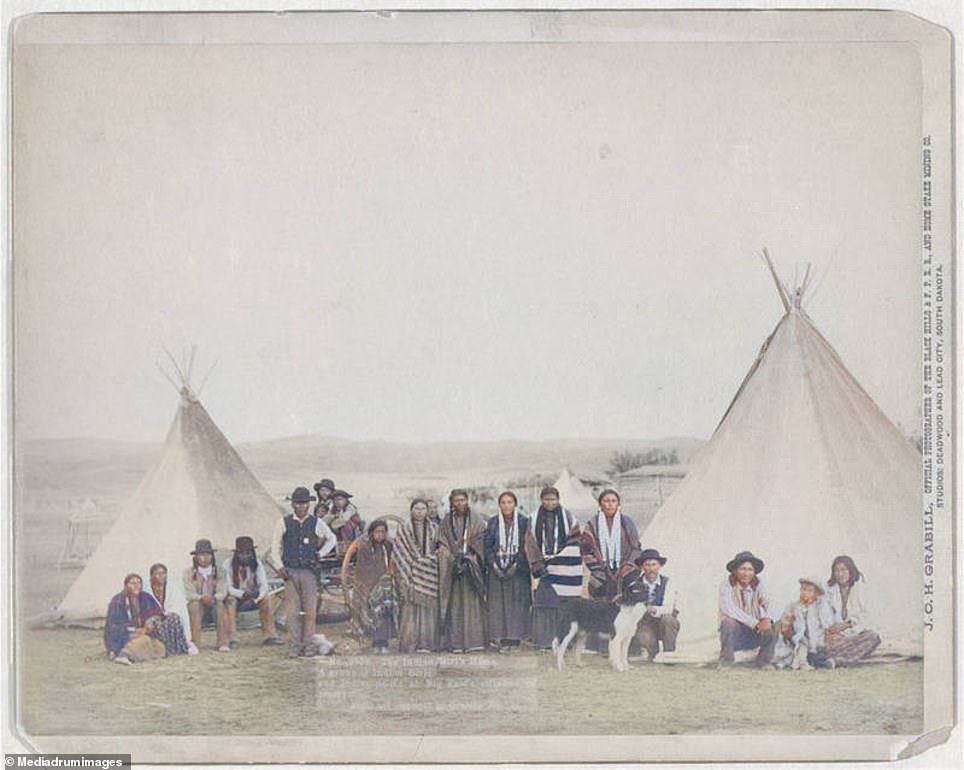 A group of 19 Miniconjou sub tribe men, women and children posed between two tipis in 1890. The Miniconjou are a Native American people constituting a subdivision of the Lakota people, who formerly inhabited an area in western present-day South Dakota 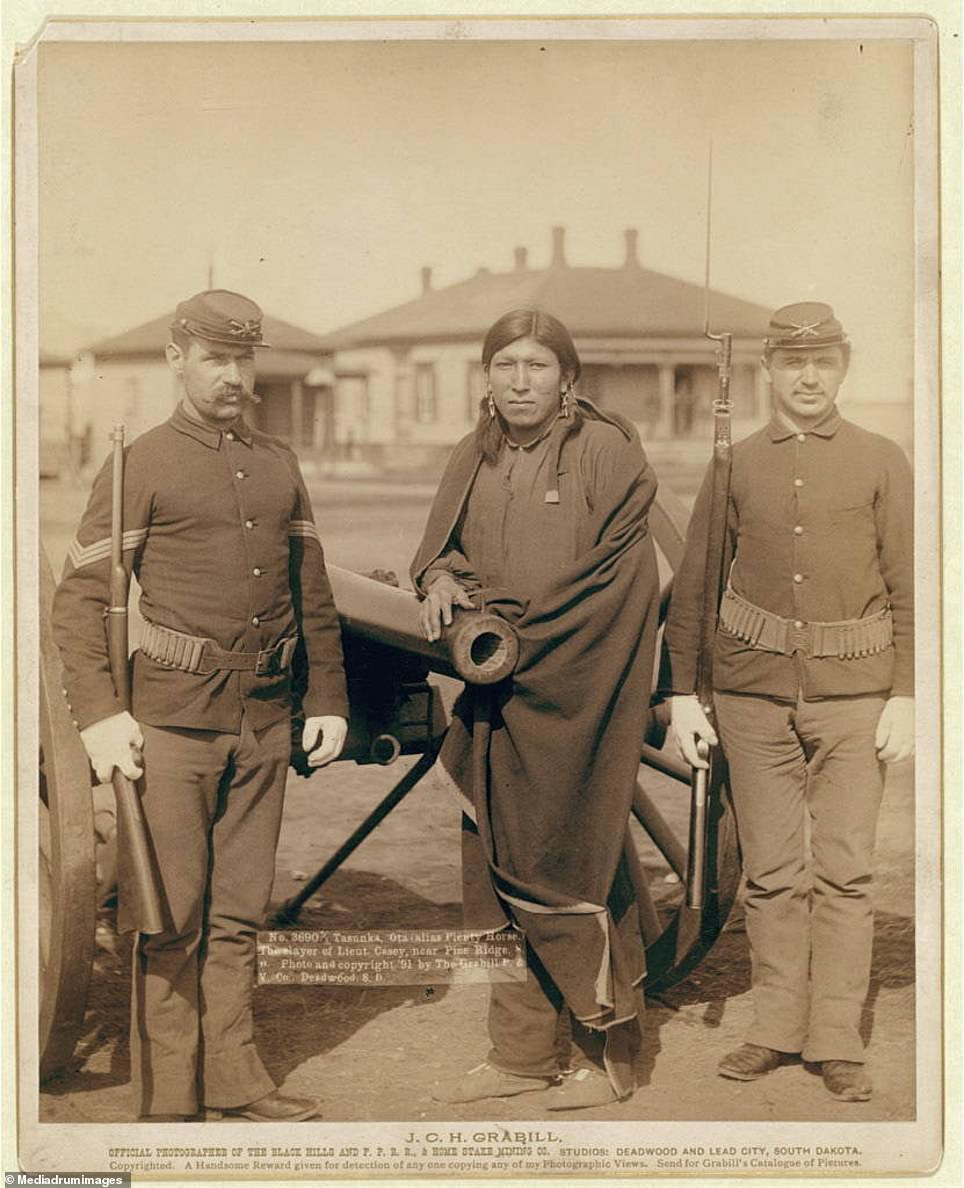 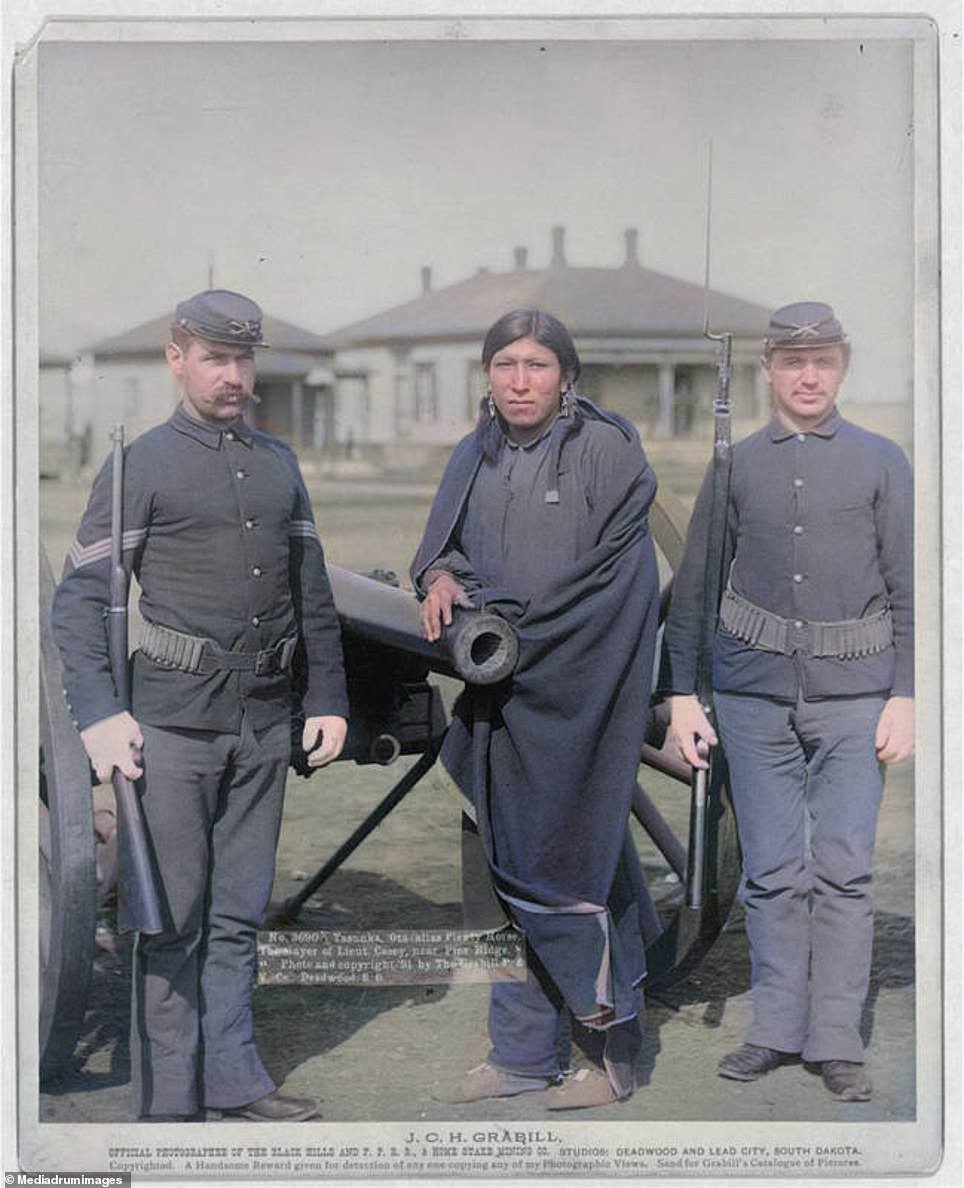 Plenty Horses, an Oglala man, and two U.S. soldiers are pictured standing in front of a cannon in a military camp in 1891. On January 1891, nine days after the Wounded Knee Massacre, he shot and killed Army Lieutenant Edward W. Casey in the Pine Ridge Indian Reservation in South Dakota 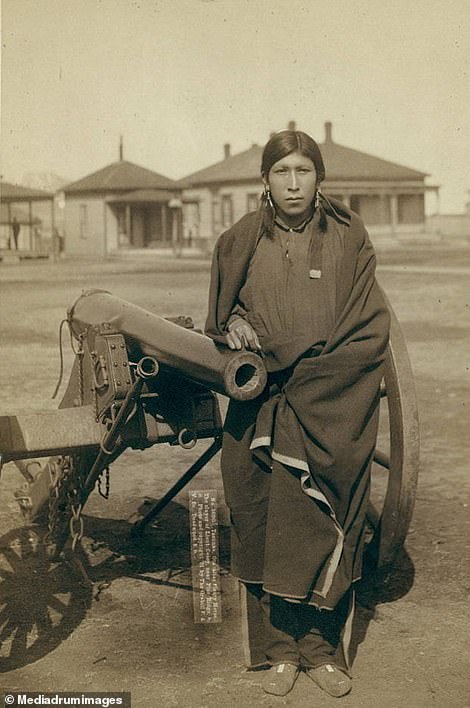 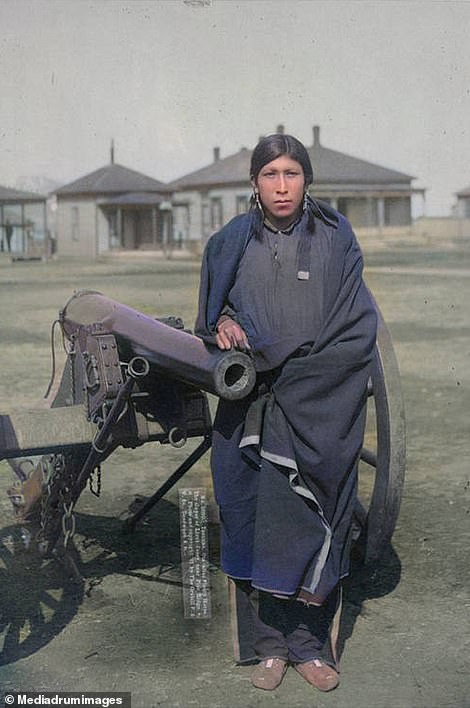 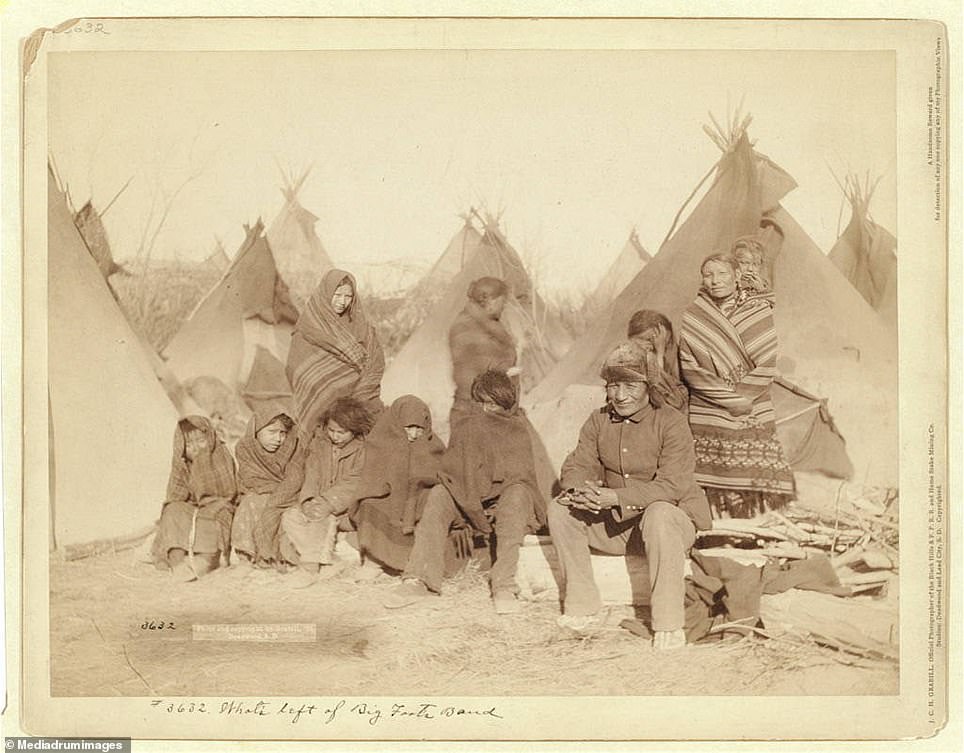 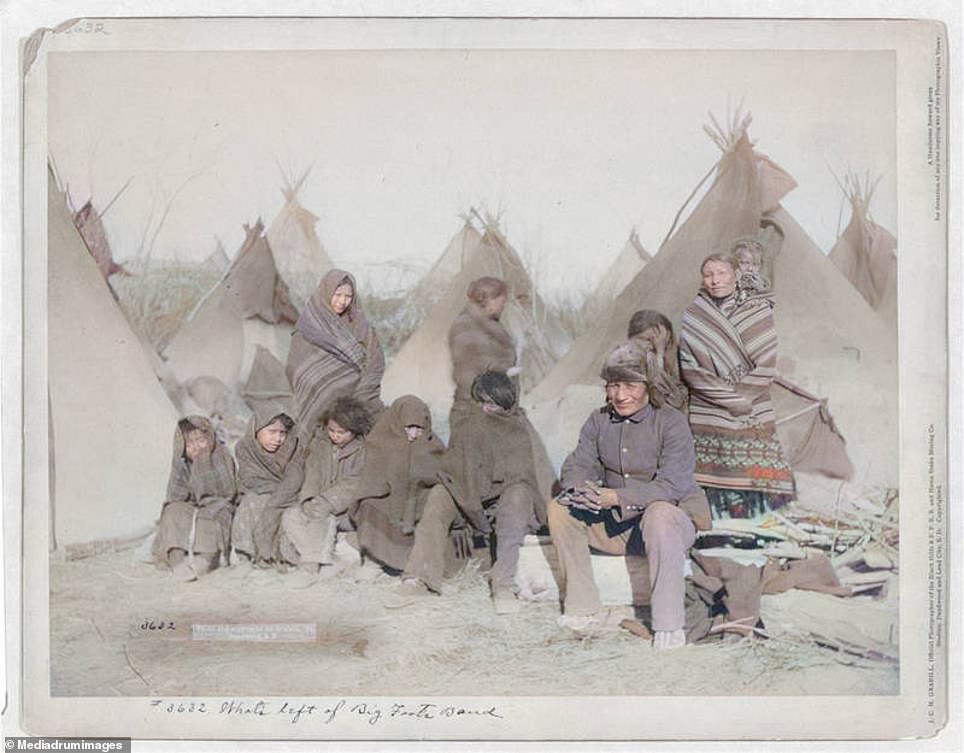 A group of Miniconjou sub tribe children and adults are pictured in a tipi camp in 1891. The children wrap themselves in blankets against the cold weather 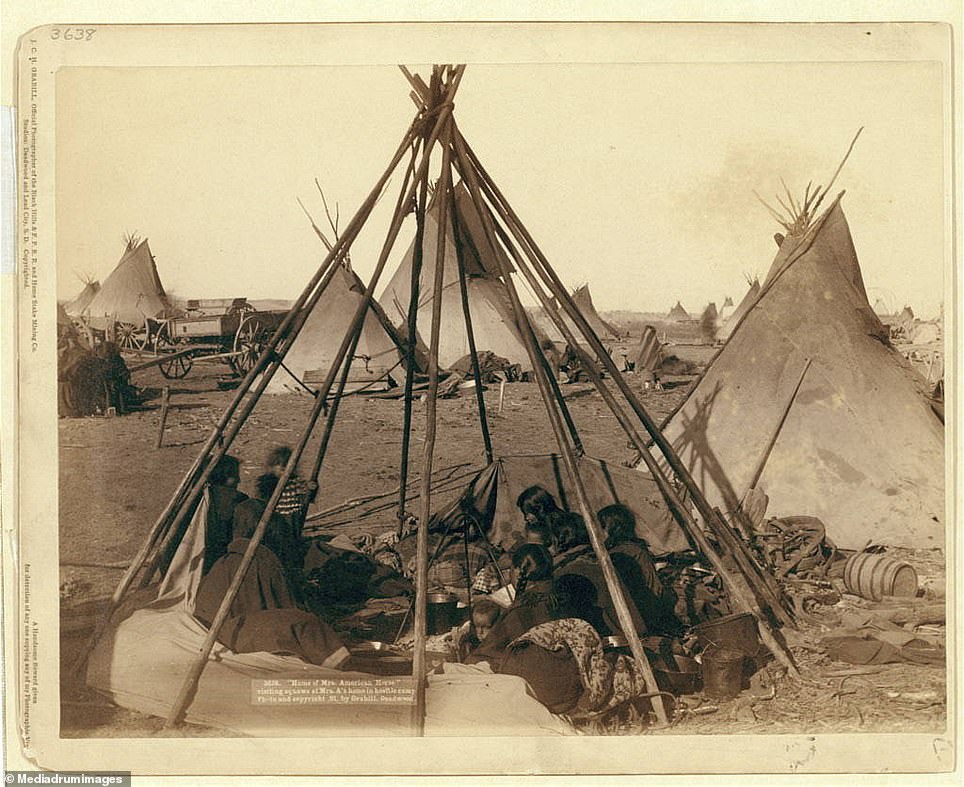 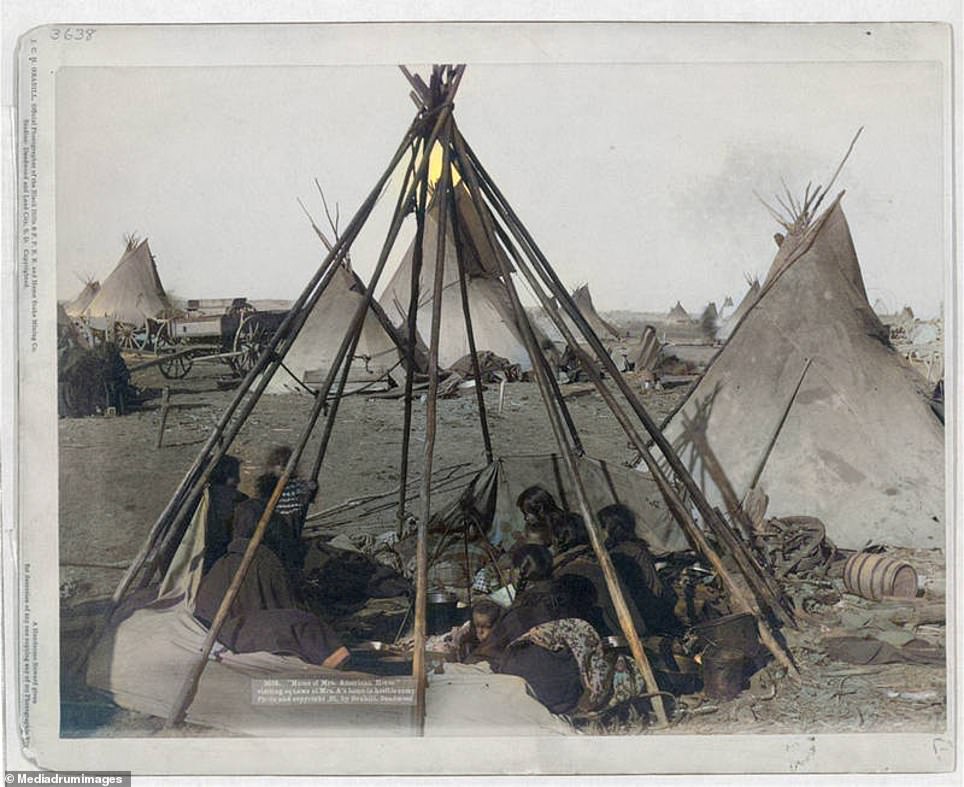 Oglala Sioux women and children inside an uncovered tipi frame near Pine Ridge Agency in January 1891. Beyond are other Indians and the materials within their camp near the site of the Wounded Knee Massacre 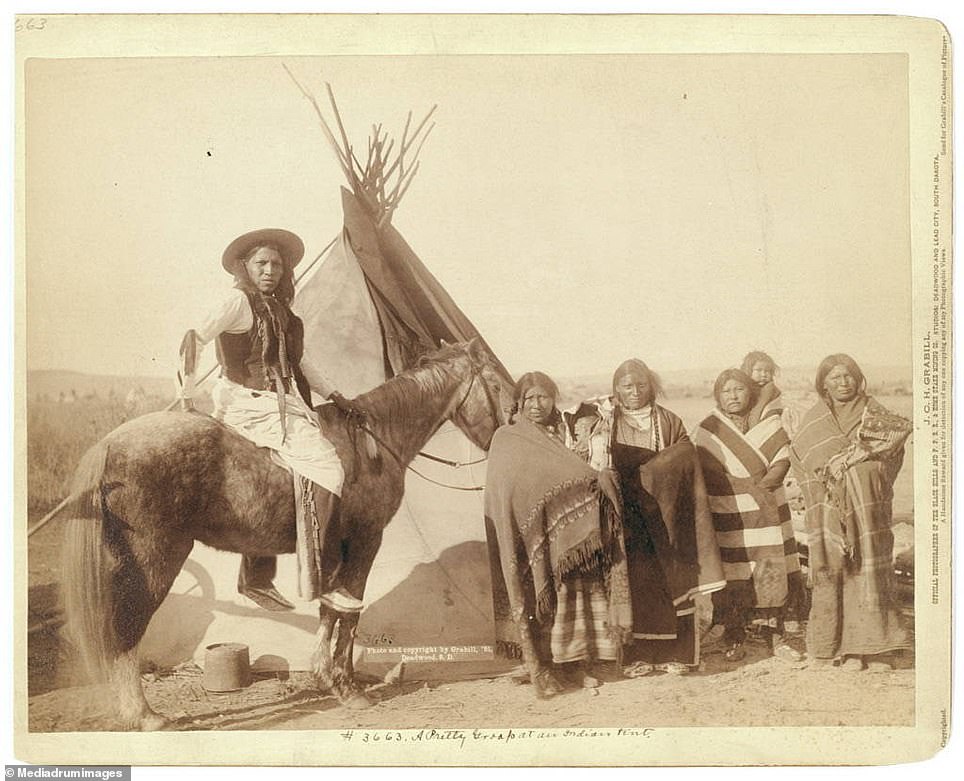 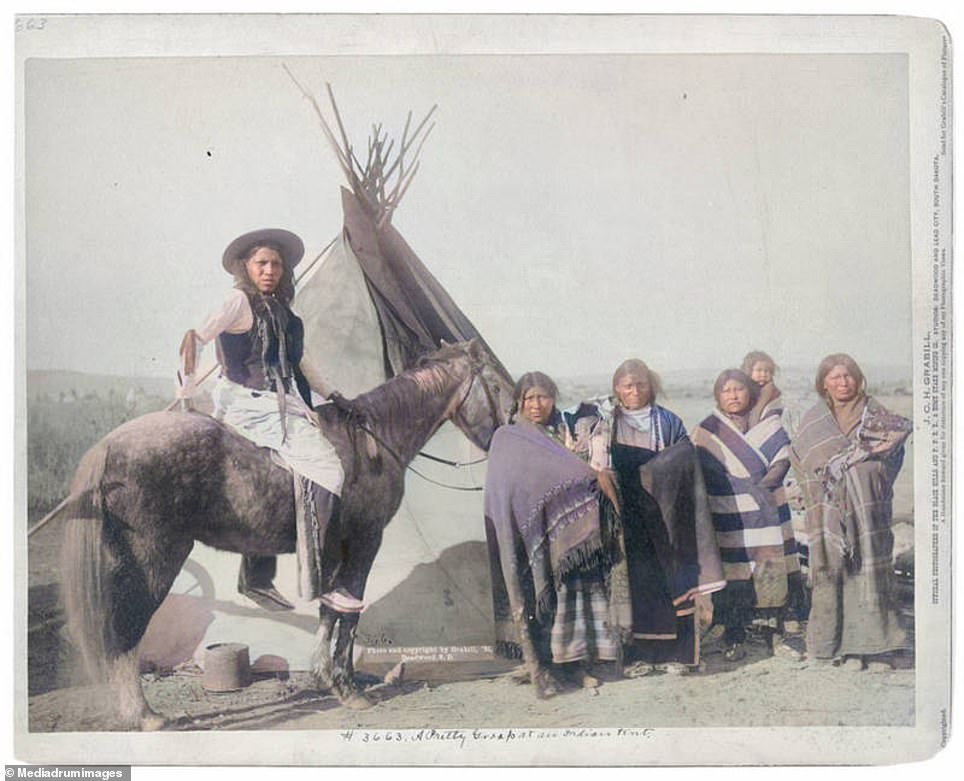 A Lokota man poses on a grey speckled horse next to four Lakota women. Three of the women are holding infants as they wrap shawls around themselves 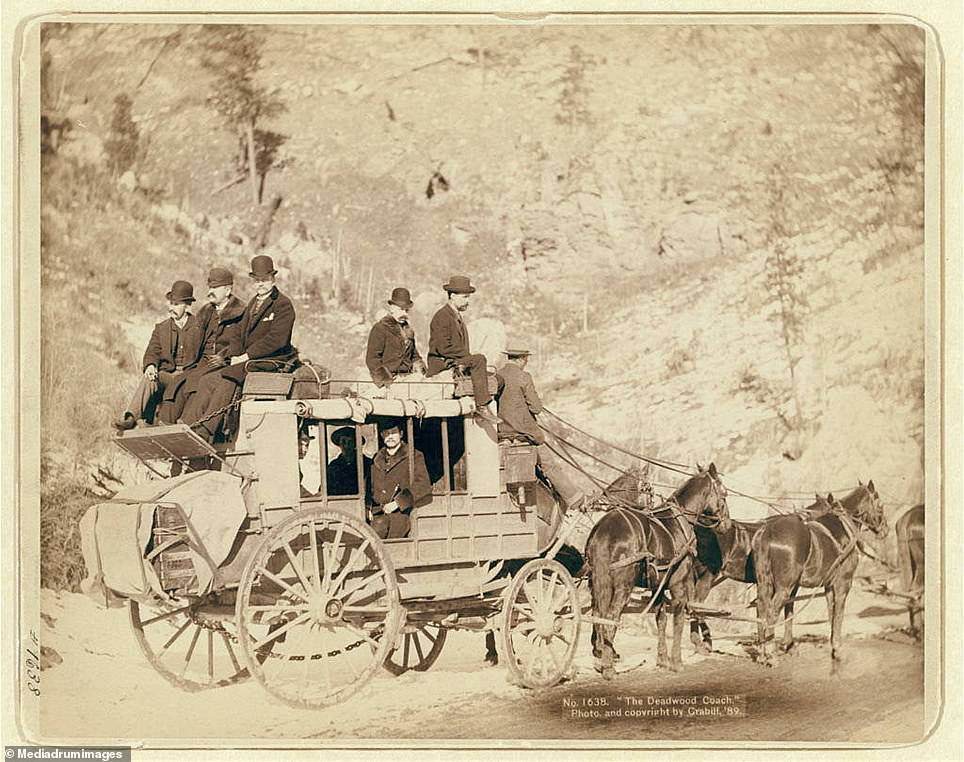 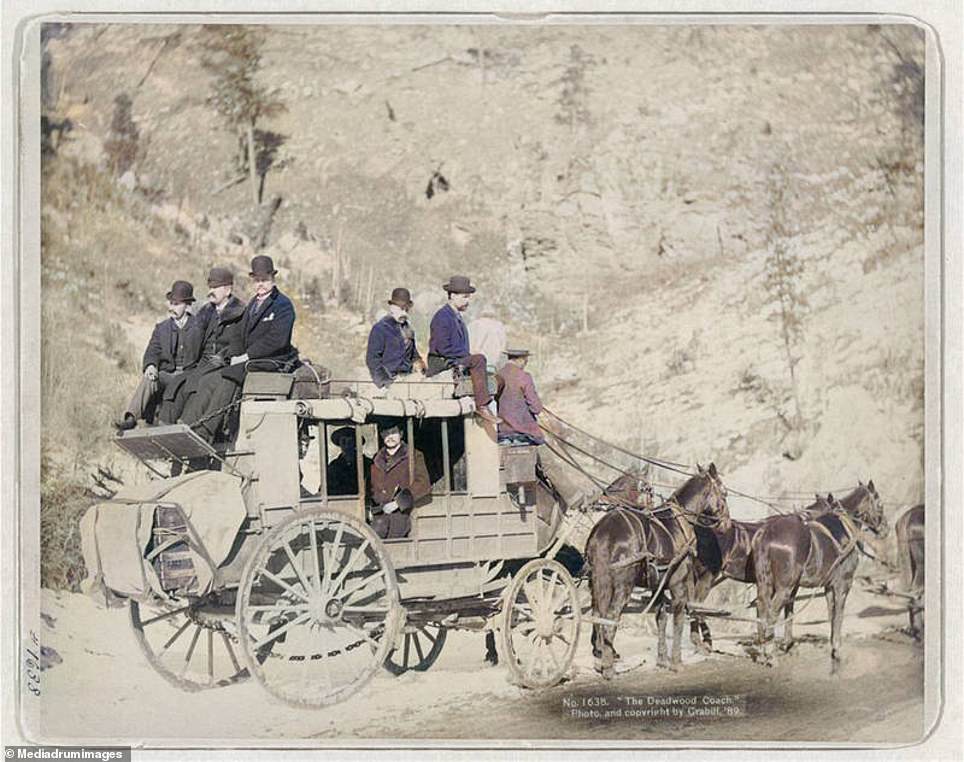 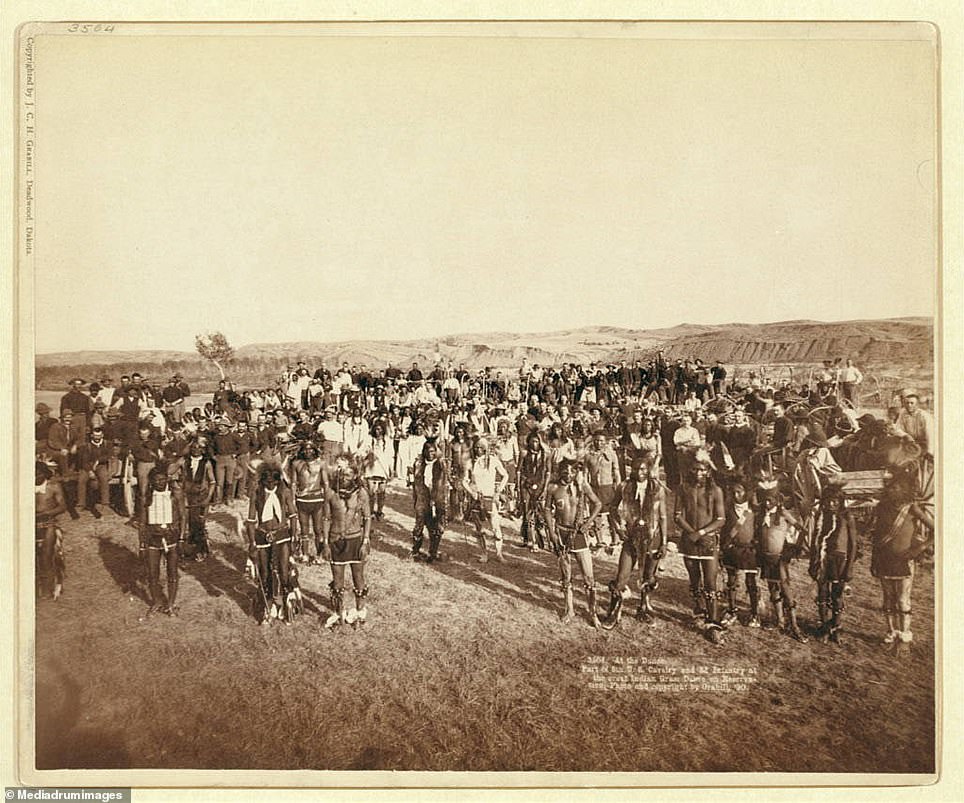 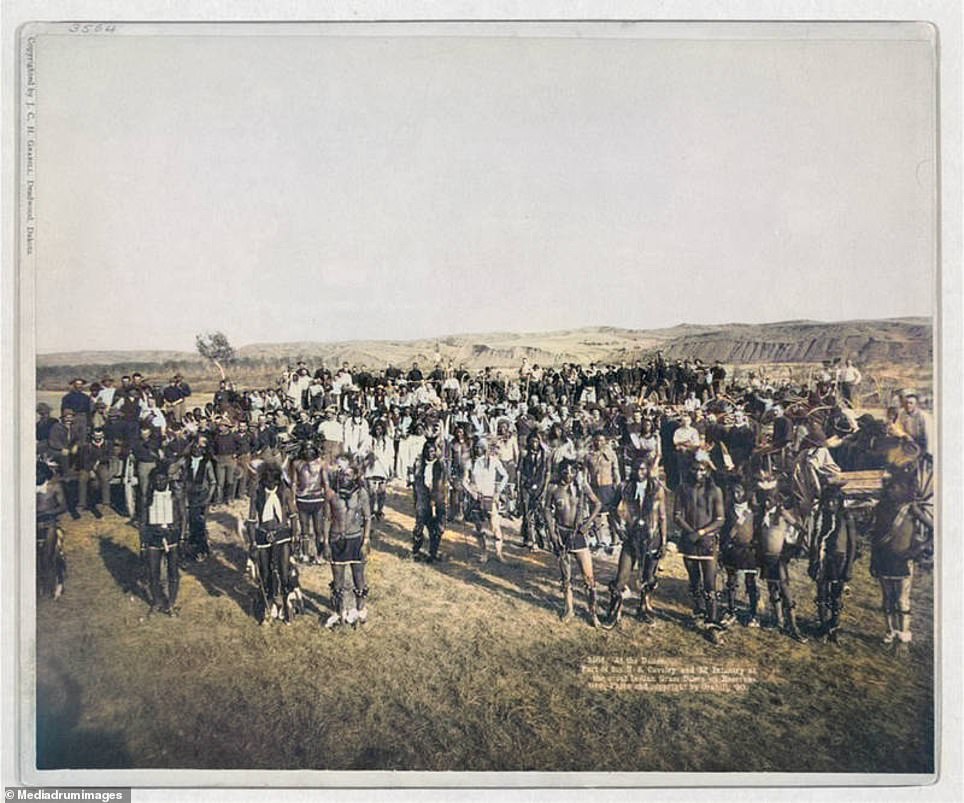 The Miniconjou sub tribe band and federal military men are pictured at a Grass Dance on the Cheyenne River in 1890. Grass dancing is a form of Native American dance where men would strike warrior poses. Before a dance could be held on the prairie the grass had to be stomped down. Dancers would then tie the grass to their outfit 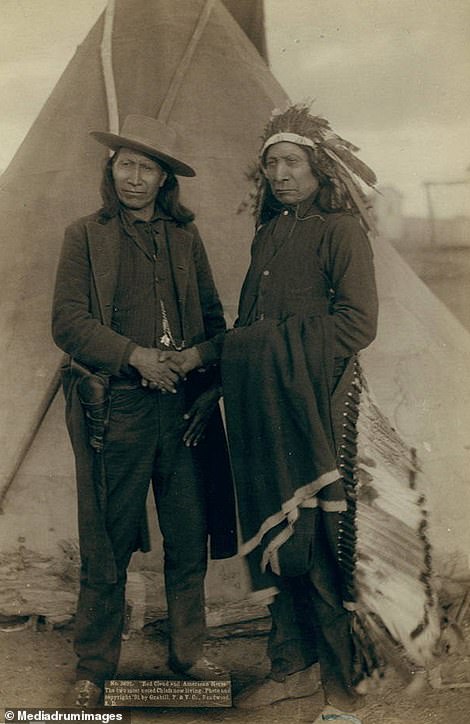 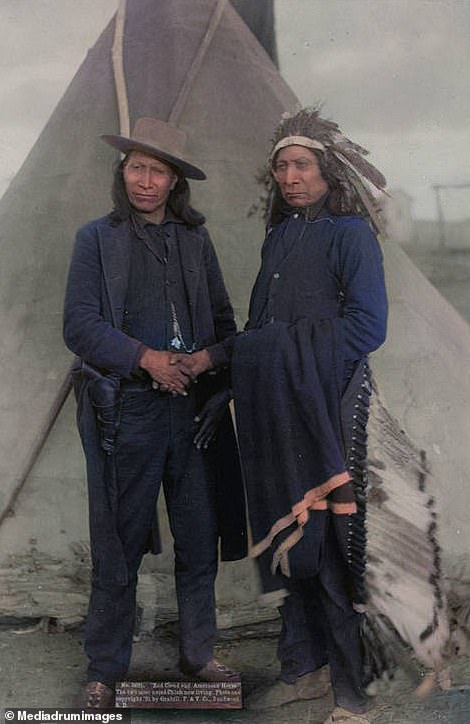 Two Oglala chiefs, American Horse, who is pictured wearing western clothing and gun-in-holder, and Red Cloud, who is wearing a traditional headdress, shake hands in front of a tipo near Pine Ridge Reservation in 1891 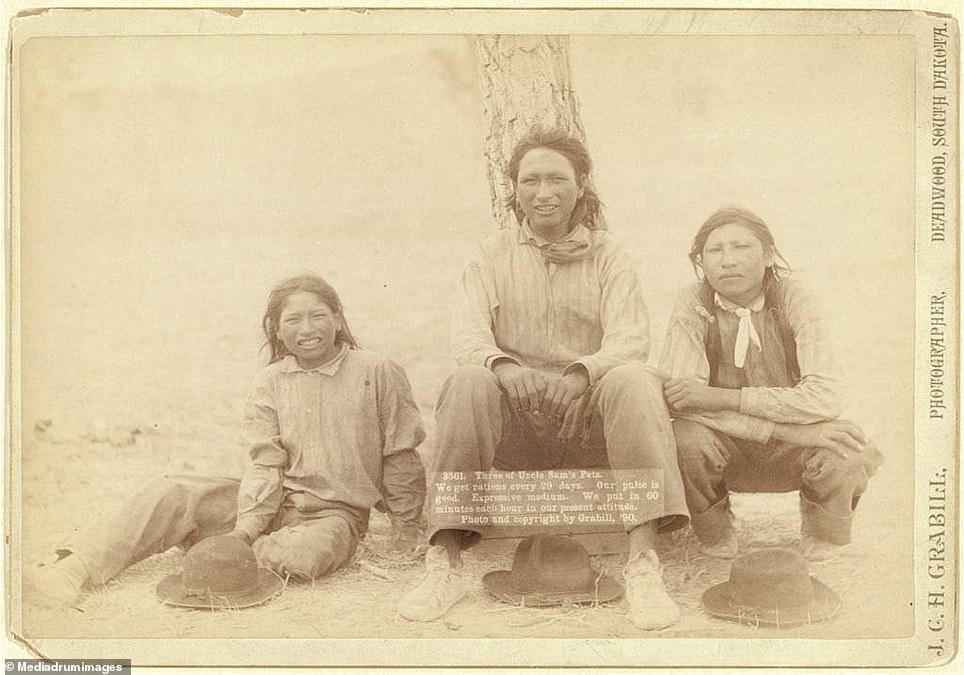 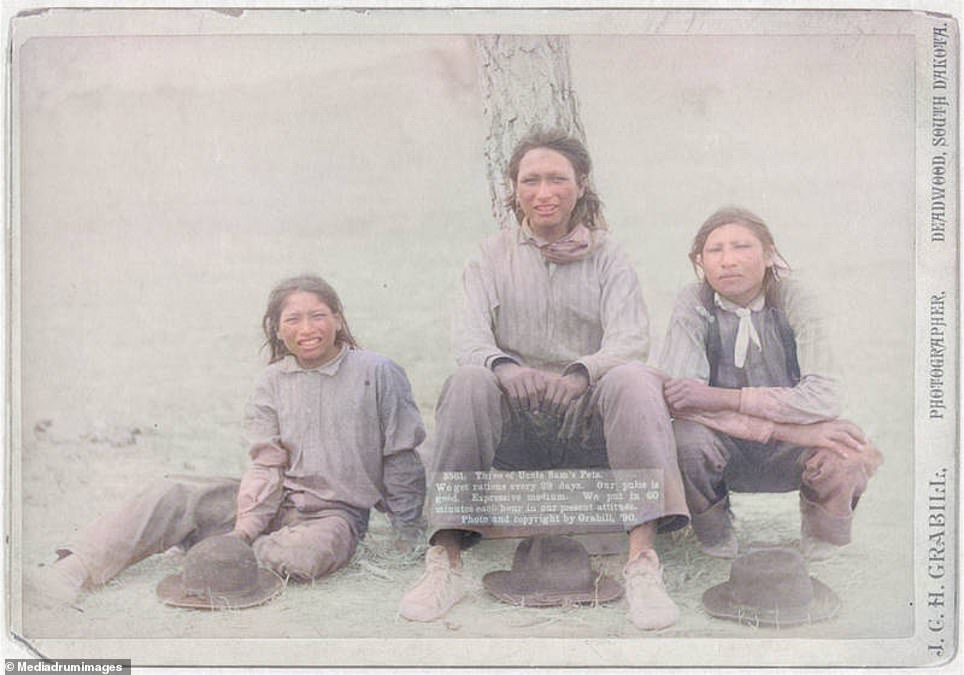 Three Lakota teenage boys in western clothing who were known as ‘Uncle Sam’s Pets’ are pictured smiling for the camera. The trio only got fed rations every 29 days

What happened in the 1980 Wounded Knee Massacre?

Some of the photographs features in John C.H. Grabill’s collection are thought to be taken just days after the Wounded Knee massacre in 1890.

The massacre was one of the final chapters in America’s long war with Native Americans and resulted in the death of nearly 300 Lakota people at the hands of US solders.

It occurred on December 29, 1890, near Wounded Knee Creek on the Lakota Pine Ridge Indian Reservation in South Dakota.

US Government officials had banned a growing religion known as the Ghost Dance on a South Dakota reservation that month.

As part of the crackdown against the Ghost Dance, soldiers from the Seventh U.S. Cavalry Regiment arrested a band of Lakota who were traveling toward the Pine Ridge Reservation and confined them to a camp near Wounded Knee Creek.

The day after the arrest, the military attempted to recover weapons from the imprisoned refugees. There are differing versions of what happened, but according to the US version of the story, a deaf tribesman named Black Coyote resisted attempts to disarm him that morning and in the struggle a shot was fired.

The US army reacted by opening fire on the Native Americans. The Lakota people tried to fight back – but many had already had their weapons taken from them.

Around 300 Lakota people – including women and children – were killed in the massacre.

In 1990, Republicans and Democrats passed a resolution in Congress formally expressing ‘deep regret’ for the massacre.