Bad move! Impala makes a fatal mistake when it wanders right up to a family of three cheetahs hidden behind a termite mound

An unlucky impala met a gruesome end after wandering to close to a termite mound where three cheetahs were lying in wait.

The three cheetahs had been spotted by other rangers the day before, so Michael was trying to lead his group towards them when he recorded the encounter.

In the video, three cheetahs are seen lying down behind a termite hill while a group of impala graze among the tall grass nearby.

Three cheetahs lie down behind a termite mound in MalaMala Game Reserve, Mpumalanga province, South Africa, as an unsuspecting impala walks towards them 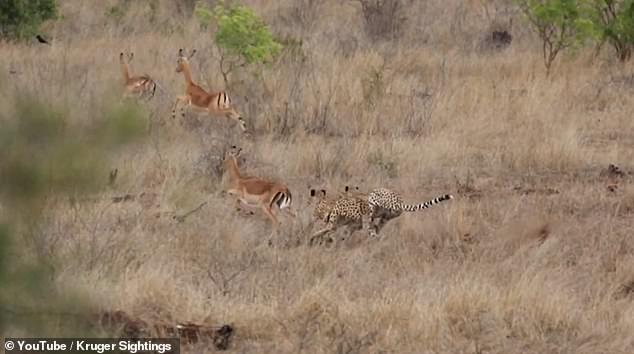 The big cats, one mother and two adult sons, peek over the ridge of the mound at the group of impala as one of the animals breaks away from the group.

The impala comes within a few steps of the cheetahs and realises something is wrong. As it looks over the termite mound its ear began twitching.

Suddenly the three cats leap up and chase the impala.

The impala tries to run back to its group but is cut off by the cats who surround the animal before dragging it to the ground.

The three cheetahs are then seen feasting on the impala’s body.

Mr Tilley said there were reports that a male lion had chased off the three cheetahs to claim the impala carcass. 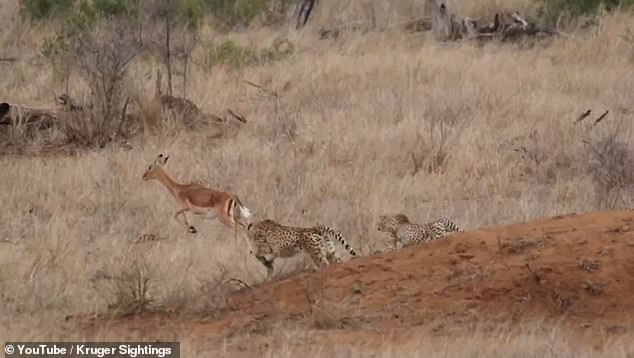 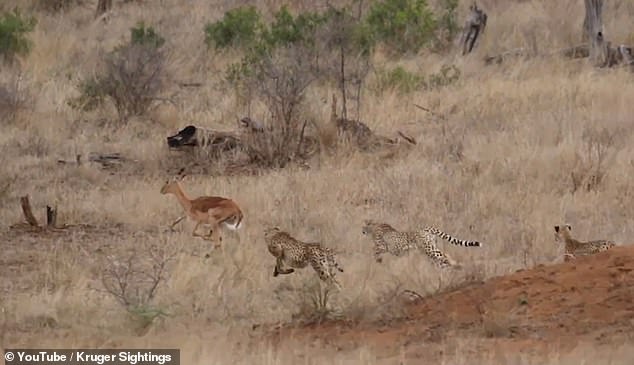 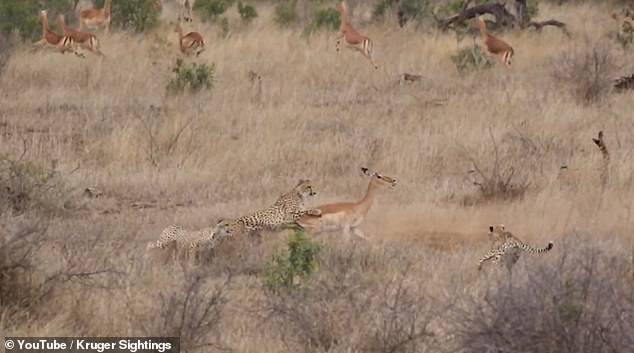 Mr Tilley said: ‘Probably an hour or so into the drive, we managed to find the cheetahs in a block of land to the south of our airstrip. The cheetahs were still resting when we found them.

‘Aware of what could potentially unfold, we circled ahead and spotted some impala milling about at the southern tip of the open area. With the cheetah emerging on the northern edge, we positioned our vehicles on the eastern ridge of the open area so as to not disturb any potential chase.

‘The cheetah settled down on a large termite mound to weigh up their options, but the reality was that there was still a large distance between them and the impala, and the chances of a successful chase didn’t appear very high at all.’

‘My guests were experienced safari-goers, but had mentioned prior to the sighting that they had never seen a successful cheetah chase before.

‘Needless to say, everyone was extremely excited to see how the mother cheetah would coordinate a chase.’ 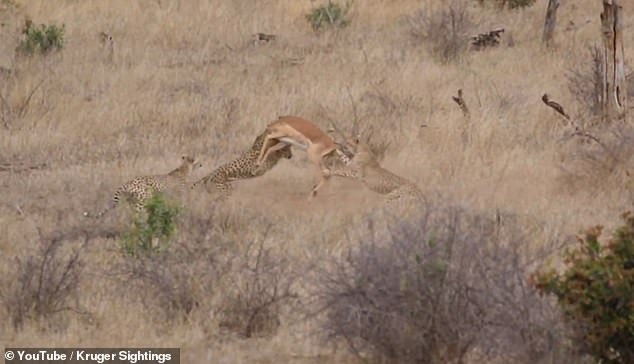 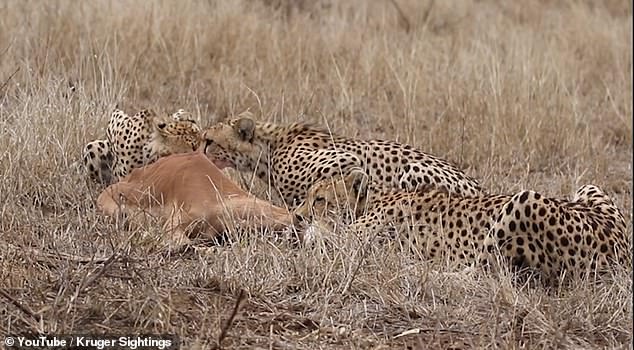 The cheetahs lie down in the grass to feast on their kill. Ranger Michael Tilley, 25, says that a male lion came later on to steal the carcass

‘What happened next was quite remarkable. An impala, unaware of the cheetah to their north, began moving through the open area.

‘With a strong wind blowing from the south, and the large termite mound keeping the cheetah out of sight, a single female impala was now heading straight towards the lurking predators.

‘We watched on from the edge of our seats, amazed by what we were witnessing.’

A female leopard was spotted by Michael’s group also watching the cheetahs chase the impala from the safety of a different termite mound.