Scientists at Northwestern University are developing a device to control the body’s circadian clock.

The implant will include engineered cells that produce the same peptides the body makes to regulate sleep cycles.

When the engineered cells are exposed to light, they will generate precisely dosed peptide therapies that experts say will halve the time it takes to recover from disrupted wake/sleep cycles.

The circadian clock, or circadian rhythm, is a natural process in the body that regulates sleep/wake cycles, which repeats about every 24 hours.

When this is disrupted, a person can struggle to fall asleep, wake up throughout their slumber or not rest as long as they had hoped for.

However, the Northwestern device, funded by the Defense Advanced Research Projects Agency (DARPA), could easily regulate the process.

The device, formally known as NTRAIN (Normalizing Timing of Rhythms Across Internal Networks of Circadian Clocks), is still a concept that is set to be developed in two phases. 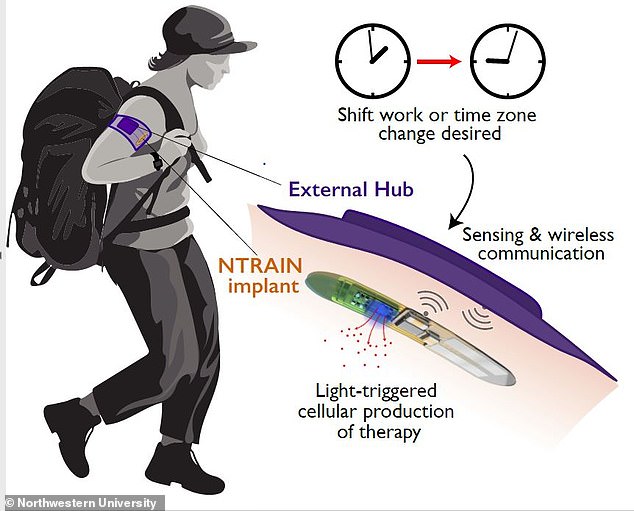 Based on cues from the body’s physiology, the external hub detects the user’s circadian rhythm, and triggers the implant to produce precisely-dosed peptide therapies using a simple beam of light

The first phase of the program focuses on developing the implant and the second phase, contingent on the first, will validate the device.

If the second phase is completed, researchers will move right into human trials of the device.

The full funding corresponds to $33 million over four-and-a-half years.

When it moves to human trials, NTRAIN would be implanted into the arm where users can easily access it to input a desired shift.

Based on cues from the body’s physiology, the external hub detects the user’s circadian rhythm, and triggers the implant to produce precisely-dosed peptide therapies using a simple beam of light.

Northwestern’s Jonathan Rivnay, principal investigator of the project, said: ‘This control system allows us to deliver a peptide of interest on demand, directly into the bloodstream.

‘No need to carry drugs, no need to inject therapeutics and — depending on how long we can make the device last — no need to refill the device. It’s like an implantable pharmacy on a chip that never runs out.’

Beyond controlling circadian rhythms, the researchers believe this technology could be modified to release other types of therapies with precise timing and dosing for potentially treating pain and disease.

‘The experiments carried out in these studies will enable new insights into how internal circadian organization is maintained,’ said Turek, who co-leads the sleep team with Vitaterna.

‘These insights will lead to new therapeutic approaches for sleep disorders as well as many other physiological and mental disorders, including those associated with aging where there is often a spontaneous breakdown in temporal organization.’

Our internal circadian rhythms, or circadian clock, is responsible for waking our bodies up in the morning and ensuring they get a good night’s rest.

By mid-morning, the cortisol levels start dropping, while the adrenaline (for energy) and serotonin (a mood stabilizer) keep pumping.