London Marathon organisers are investigating after a runner lost his race number barely two miles from the finish line – with an imposter apparently finishing in his place to claim his well-earned medal.

Jake Halliday, 28, an investment manager from Edinburgh, who was raising cash for cancer, had been running for more than three hours when he was taken off the course, having lost his race number.

The alleged imposter posed at the finishing line for photographers while the real runner Jake was escorted off the course by stewards. 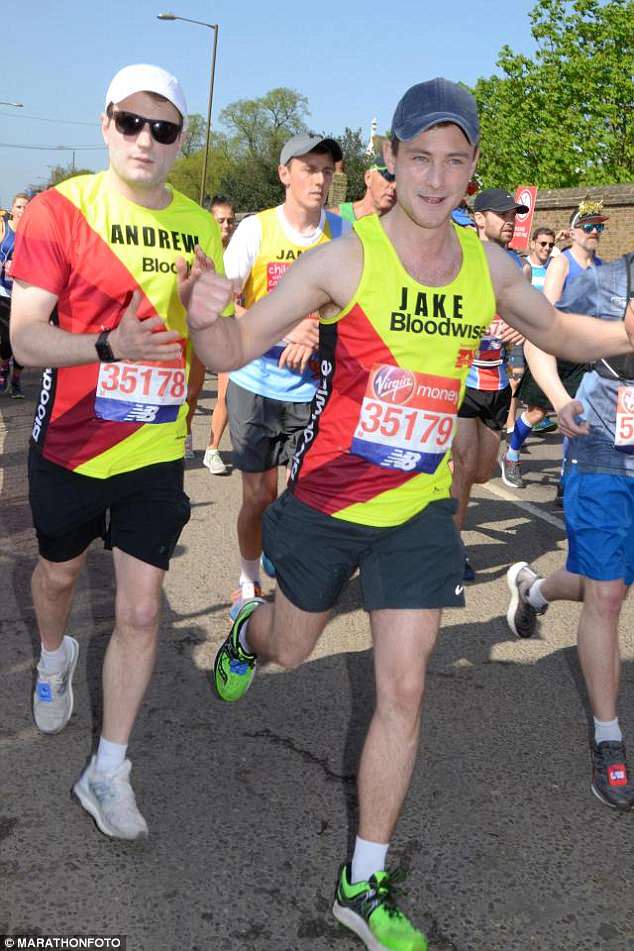 Jake Halliday (pictured) who was raising cash for cancer, had been running for more than three hours when he was taken off the course by stewards, having lost his race number

The apparent imposter even kisses the medal as he poses with Jake’s race number, 35179.

Officials are now investigating, with other runners calling for Jake – who raised more than £48,000 with pals for cancer research – to be given his well-deserved medal.

The identity of the imposter remains unknown and a social media campaign has been launched to find him and return the medal to its rightful owner.

According to tracking results, Jake had started running at 10.30am, managing to reach the 40km mark in little over three hours. However, his finish time was never recorded.

According to Peter Mowbray, 51, a fellow runner who publicised the incident on Facebook, Mr Halliday was prevented from completing the race by two marshals who saw that he wasn’t wearing a number and escorted him from the course.

‘It takes a lot of work to run a marathon. It’s not a matter of eating a bowl of pasta and having a go, it’s 12 months worth of training,’ Mr Mowbray said.

‘Jake had his once-in-a-lifetime experience stolen from him by an imposter. The running world is very close-knit and when I saw the photograph of that man taking Jake’s medal I cried.’ 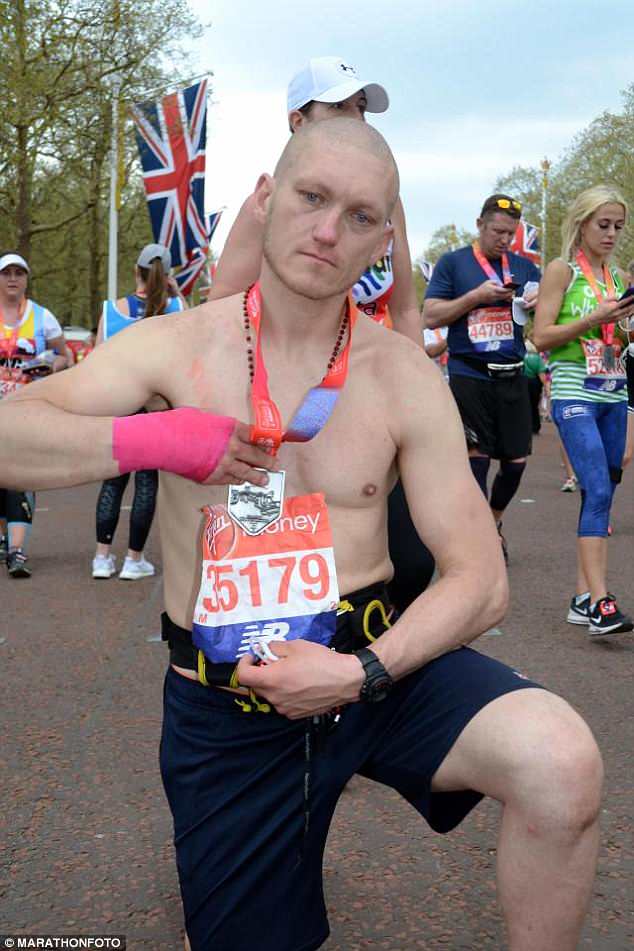 The apparent imposter – whose identity is unknown – posed with the medal for photographers at the finishing line wearing Jake’s race number, 35179

In addition to the numbers on their vests, competitors have electronic chips on their trainers to prevent identity fraud. Virgin Money, the organisers of the event, are understood to be looking into the situation.

Mr Halliday took part in the race in support of his friend’s girlfriend who was diagnosed with non-Hodgkin lymphoma in October 2016.

The Facebook post made by Mr Mowbray, an anaesthetist at a hospital in Blackpool, has been shared more than a thousand times as the public rallies to identify the imposter.

One reader, Matt Godden, commented: ‘That is unreal. That man needs to go viral and be named and shamed.’

The London Marathon has seen a number of allegations of cheating in its 37-year history.

In 2016, TOWIE star James Argent’s sister Natasha had her results removed from the official race website and agreed to return her medal after she ‘ducked under a barrier’ during the race.

She was found to have missed 11 out of 24 checkpoints and miraculously finishing the final 20km in just 39mins, quicker than Olympian Sir Mo Farah.

In 2014, 34-year-old model Jason Scotland-Williams denied skipping nine miles of the course to achieve a ‘miracle’ time, the second half of which fell just three minutes shy of the world record – and three minutes faster than Sir Mo.

Four years before that, a runner thought to have recorded the quickest-ever time for a pensioner was stripped of his ‘fastest OAP’ title after admitting he took a 10 mile shortcut at Tower Bridge. He claimed he had altered his route due to injury.

In 2011, another competitor was disqualified from the Great North Run after it was revealed that he had travelled most of the final six miles on a bus.

The following year, father-of-two Rob Sloan tried to get round his ban by entering the race again under a fake name while disguised in sunglasses.