In Arles, you can see Van Gogh’s old haunts, the hospital he attended and the site of his old home

When Vincent Van Gogh arrived in Arles in February 1888, he found an ancient Provencal town on the banks of the Rhone littered with Roman remains and drenched, even in winter, in Mediterranean light.

Happily, much of Arles is recognisably the same today. You can seek out shade in Les Alyscamps, the medieval necropolis where Van Gogh and his housemate, the artist Paul Gauguin, with whom he had a tempestuous friendship, worked en plein air. You can also wander through the corridors of the Roman amphitheatre where Van Gogh bought tickets for the bull-fighting but actually painted the female spectators wearing white-collared blouses and long dresses.

Today, women in this region still wear this traditional costume if you go during the Ferias d’Arles, the city’s two great festivals: the one in April celebrates Easter and the other in September celebrates the rice harvest of the Camargue.

The embankment at Arles, above, where Vincent Van Gogh painted his famous Starry Night On The Rhone masterpiece 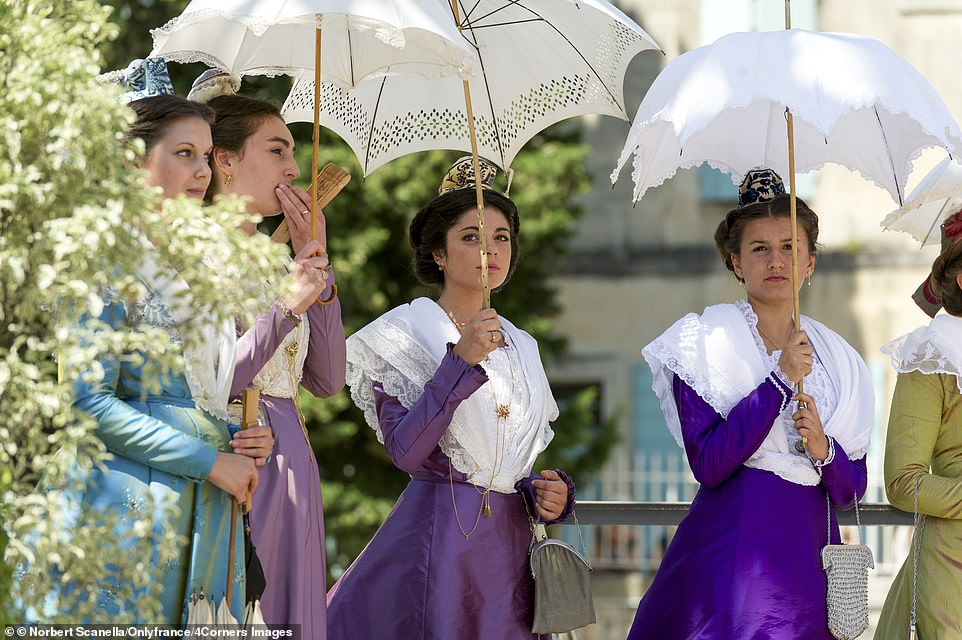 Women still wear the traditional costumes (above) as they did in Van Gogh’s time at the Ferias d’Arles, the city’s two great festivals: the one in April celebrates Easter and the other, in September, celebrates the rice harvest of the Camargue

The late spring and early summer months are probably optimal times to visit for good weather and before the crowds swell.

Van Gogh came here by accident – he was travelling by train from Paris to Marseilles when the track at Arles was blocked by snow. He ended up staying for two years and created some of his best-known works, including Sunflowers and Starry Night On the Rhone, both of which feature in a new blockbuster exhibition at Tate Britain called Van Gogh And Britain.

Why not arrive the opposite way to Van Gogh? Fly to Marseilles and take a direct train to Arles from the airport (the station is outside the airport, served by a shuttle bus). The journey takes 40 minutes.

If you arrive in the evening, turn left out of Arles station and it’s only a short walk to the banks of the River Rhone where Van Gogh painted. There’s even a plaque that claims to be the exact spot where he had to peg his easel into the ground because of the mistrals – the strong northerly winds that attack France’s Mediterranean coastline. 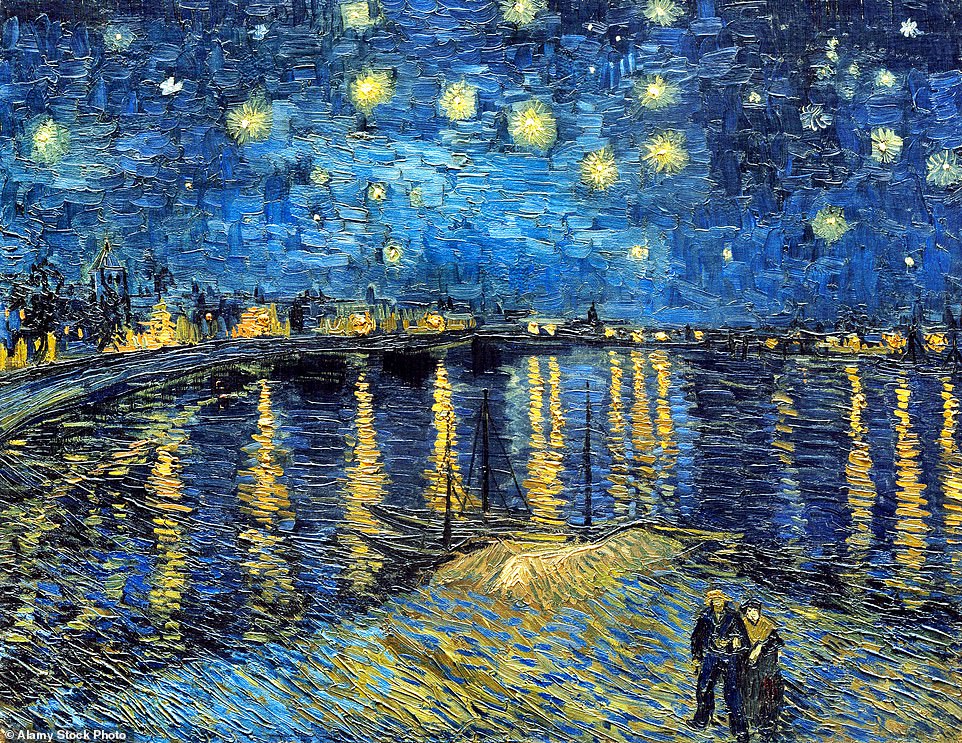 Making a good impression: Van Gogh’s interpretation of the harbour at Arles – where he stayed for two years after his train to Marseilles was disrupted by snow. It depicts a scene that has changed very little since his 19th century painting

If the cold wind leads you to seek shelter, then head into the narrow streets behind the embankment and walk up Rue du Docteur Fanton for dinner at Les Filles de 16 (restaurantlesfillesdu16.fr/index-en.php).

The English language version website of this great little bistro boasts of ‘regional stonework of old, shaded latticework of climbing shrubs and vines’, but you know what they mean. Start with grilled goat’s cheese, followed by a main course of duck, and finish with a creme brulee – rather better fare than enjoyed by Van Gogh. In his penury, he was reduced to a coffee-and-bread diet on occasion.

Afterwards, don’t have your nightcap at Le Cafe La Nuit on the Place du Forum, immortalised by Van Gogh as Cafe Terrace At Night. The owners have painted it yellow, even though it wasn’t the colour scheme Van Gogh was portraying in his famous picture – instead it was the effect of recently installed gas lighting.

There can be a noisy forest of selfie-taking fans on the terrace – in contrast, beneath your feet are unnervingly silent Roman vaults called Les Cryptoportiques. 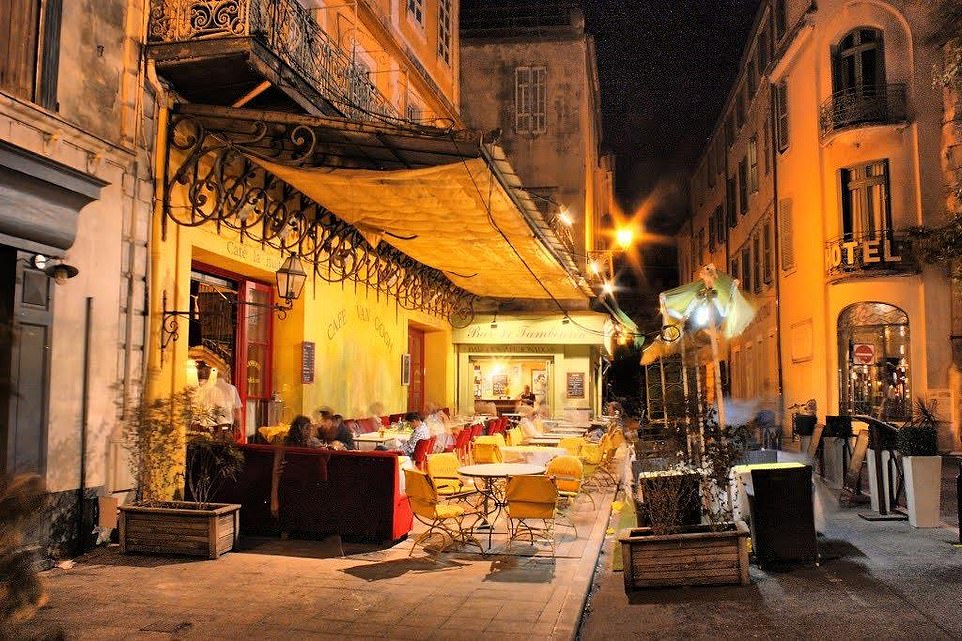 Let the sunshine in: In tribute to the artist Van Gogh, Le Cafe La Nuit, in Arles, has painted its exterior yellow but the advice is to avoid having a nightcap there

Walk for ten minutes to the curving Rue de Cloitre, where you will find the hotel Le Cloitre (lecloitre.com/en). Once part of a nunnery and now a coolly bohemian boutique establishment, Le Cloitre has interiors by the Franco-Persian designer and architect India Mahdavi. End your day with a glass or two on the small terrace bar under the Paulownia tree.

Next morning, take an early walk through the ruins of the Roman theatre before anyone else arrives and pay your respects to the 1968 bronze bust of Van Gogh by American sculptor William Earl Singer in the Jardin d’Ete park. Then wander along to the Vincent Van Gogh Foundation, a gallery in a rather grand old bank with a glass and steel facade (fondation-vincentvangogh-arles.org).

There’s a great bookshop if you want something glossy for the coffee table, and the views from the upper terrace are superb. A new show, Vincent Van Gogh: Speed & Aplomb, runs until June 1 and shows six works from his time in Provence and Holland. 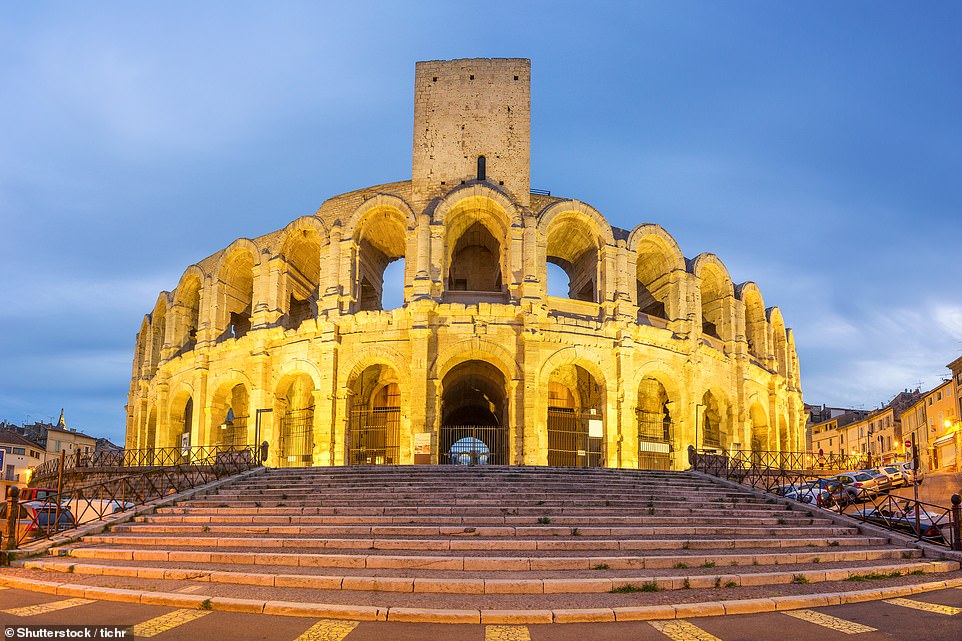 They came, they saw, they conquered: Arles is like an architectural encyclopedia and its Roman ruins include the amphitheatre (above) where visitors may pay their respects to the 1968 bronze bust of Van Gogh by American sculptor William Earl Singer in the Jardin d’Ete park

There’s a simple but fantastic cafe that serves knockout comfort food. Garlicky local pâté, braised veal with piles of potato gratin, followed by a simple bowl of yogurt with a spoonful of jam will probably slow you down, so be sure just to amble back across town.

Everywhere is near at hand in Arles, including the Hotel Dieu (also called the L’espace Van Gogh), the 16th Century hospital where the artist was taken on the morning of December 24, 1888, after he cut off his own ear. 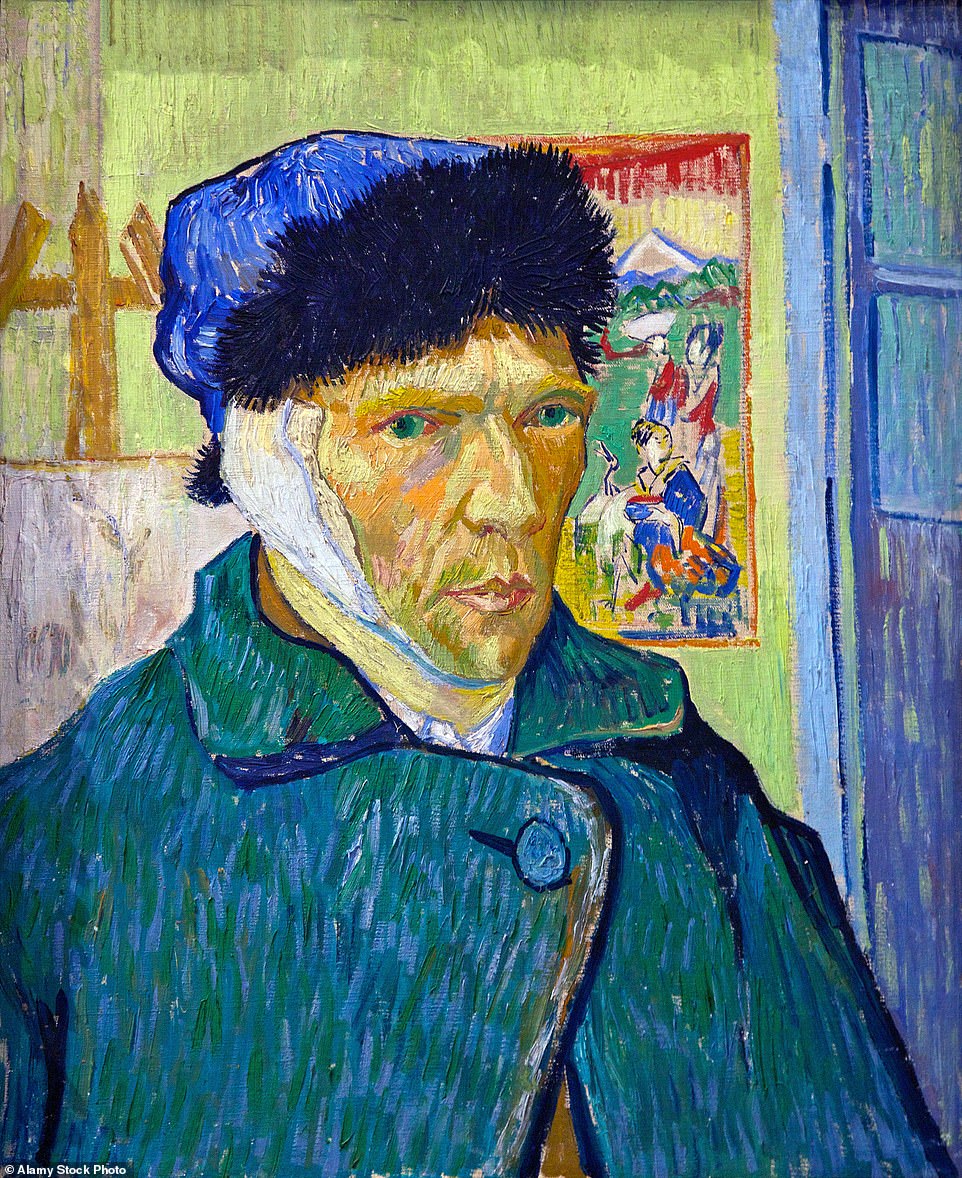 Cutting remarks: Vincent Van Gogh’s tempestuous relationship with fellow artist and housemate Paul Gauguin is attributed as being a factor in what led to the Dutch painter cutting off his left ear. Here Van Gogh documents the event on canvas 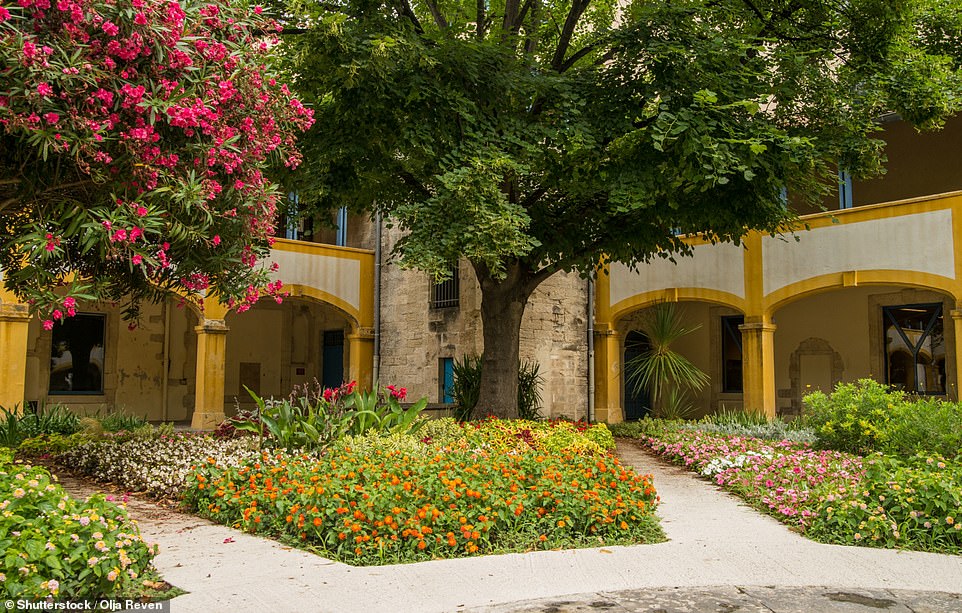 In bloom: The courtyard at Arles hospital was used as a car park in the 1960s and 1970s but has now been replanted

Walk through the gateway in the imposing stone walls and you’ll be using the same entrance that Van Gogh – delirious and white with loss of blood – would have done.

In the 1960s and 1970s, the courtyard was used as a car park. Fortunately, the space has been now been replanted. 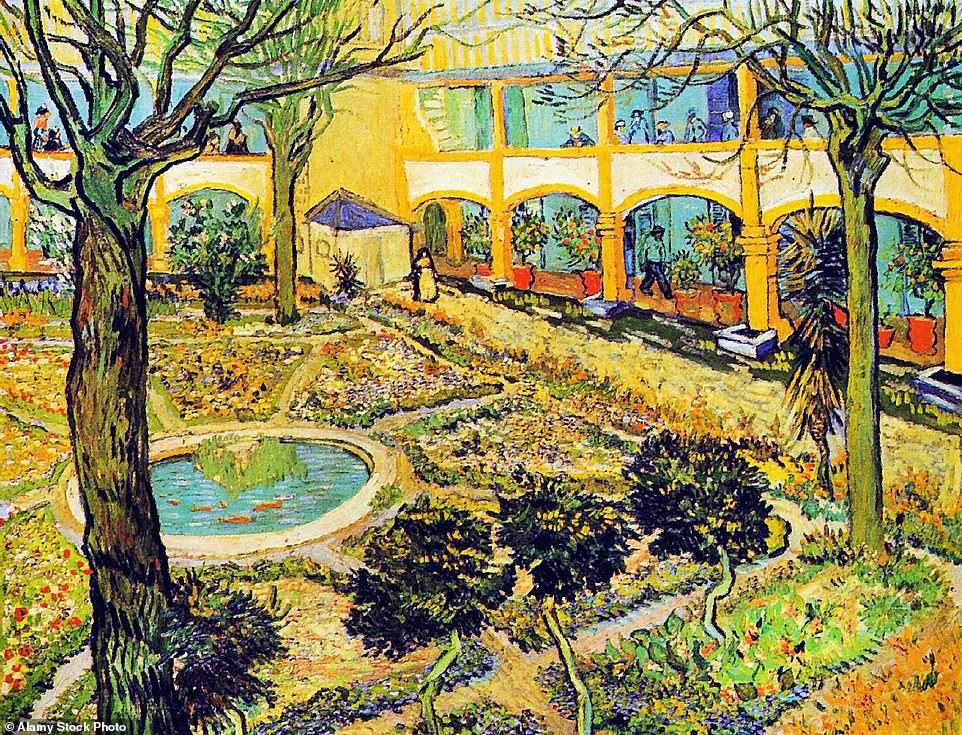 Then and now: The Courtyard of the Hospital in Arles, as painted in 1889 (above), fell into use as a car park in the mid-20th century. Thankfully, for Van Gogh, the scene again resembles this floral idyll after concerted efforts by the hospital staff

Shortly after he was released from hospital, Van Gogh was forced out of his home (the famous Yellow House, later destroyed by Allied bombing in the Second World War), and in May 1899 he committed himself into the Saint-Paul-de-Mausole asylum at nearby Saint-Remy de Provence (saintpauldemausole.fr).

The most poignant Van Gogh location in Arles no longer exists. On June 25, 1944, Allied bombers destroyed the Yellow House, the four-room home and studio in Place Lamartine that the painter occupied for much of 1888.

During Van Gogh’s time, Place Lamartine was given over to public gardens – today it is a large roundabout edged with lawns and trees. Directly opposite the 15th Century Porte de la Cavalerie gate in the city walls, at the junction with Avenue de Stalingrad, you will find an information plaque on the spot where, in September 1888, Van Gogh painted one of his most revered works, The Yellow House (The Street).

The painter hoped to establish an artists’ colony there, but he failed miserably; in the end only Paul Gauguin came and Van Gogh suffered the trauma he is still remembered for – cutting off his own ear. His time here, however, was extraordinarily fruitful, producing Chair, Still Life With 12 Sunflowers and a portrait of postman Joseph Roulin, who lived near Avenue de Stalingrad. The area may now be only a roundabout, but it is the most important roundabout in art.

Van Gogh travelled the 17 miles by horse and cart. The same journey today takes 30 minutes by taxi, or slightly longer by the 054 or 184 bus. The pantiled town sits at the foot of the Alpilles Regional National Park, a range of small, jagged mountains covered in thyme, lavender and rosemary.

If you’re here on Wednesdays, there is a market where local olives are piled high. Disastrously for the clean-living, Remy also produces wonderful biscuits and sugared fruits, and the local Coteaux des Baux de Provence is fiercely drinkable.

The Hotel de L’Image on Remy’s main road claims to be a haven and it isn’t wrong, as there are forested grounds at the rear and an outdoor pool. Get a suite in the gardens and owls will sing you to sleep.

The next morning, visit Saint-Paul- de-Mausole, which is still, in part, a working psychiatric hospital. Inside you can see a re-creation of Van Gogh’s room and enjoy a contemplative moment in the Norman cloisters.

Van Gogh was fantastically productive in Saint-Remy. To see just how busy he was, follow The Road Of Van Gogh, a walking route which will take a leisurely hour from Saint-Paul-de-Mausole back to the town centre. There are excellent French and English language signs wherever Van Gogh stopped to paint.

Sit for a moment among the olive trees, let the sun warm your face, and you might just sense him walking by. 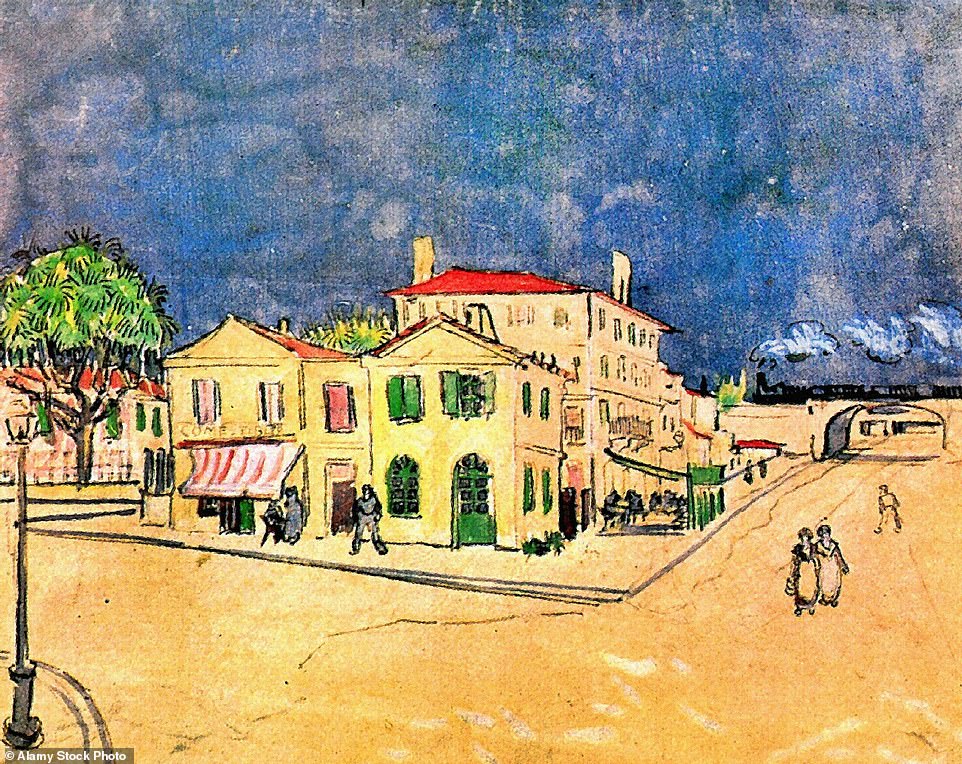 They paved paradise and put up a parking lot: The most poignant Van Gogh location in Arles no longer exists. His home, the Yellow House (depicted by the artist above in 1888), was destroyed by allied bombers in 1944 and is now a roundabout

Direct flights from the UK to Marseilles take about two hours – return fares cost from £30 with Ryanair (ryanair.com), from £80 with easyJet (easyjet.com) and from £133 with British Airways (ba.com). It is a 40-minute train journey from Marseilles to Arles – one-way fares cost about £15 (thetrainline.com).