In-N-Out has sued a YouTuber who stormed two of its restaurants pretending he was the ex-husband of its billionaire female CEO to demand better food standards as part of an elaborate prank which his friends filmed.

Twenty-something Cody Roeder is the face of Trollmunchies, a YouTube pranking channel with more than 600,000 subscribers.

On March 13 and 14, he visited two In-N-Outs in Los Angeles dressed in a suit and pretended he was the ex-husband of 35-year-old Lynsi Snyder-Ellingson, the fast food chain’s heiress and CEO.

Snyder, 35, has been married four times and is worth a reported $1.2billion. She is the sole heir the burger chain which her grandparents founded in 1948.

According to the lawsuit, Roeder told staff in both restaurants that he was there to carry out a ‘surprise’ inspection and that he was now in charge.

The manager at the first restaurant did not fall for his prank and called police.

The next day, however, he was seen grabbing a burger out of a customer’s hand in the next restaurant and slamming it on to the floor.

Roeder placed his foot over the wrapped-up burger and declared: ‘Sir, your food is contaminate!’ before being asked to leave.

Now, In-N-Out is asking for a restraining order which will stop him from entering any of its restaurants.

Snippets of them were obtained by CBS Los Angeles on Monday.

In the first, Roeder is filmed entering the kitchen area of the In-N-Out in Van Nuys and telling staff he is the ‘new CEO’. 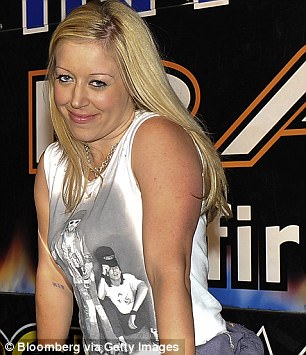 Roeder, who is in his twenties, visited the restaurants in Los Angeles on March 13 and 14. He is filmed in the back of his car after being thrown out of the first one where staff were suspicious 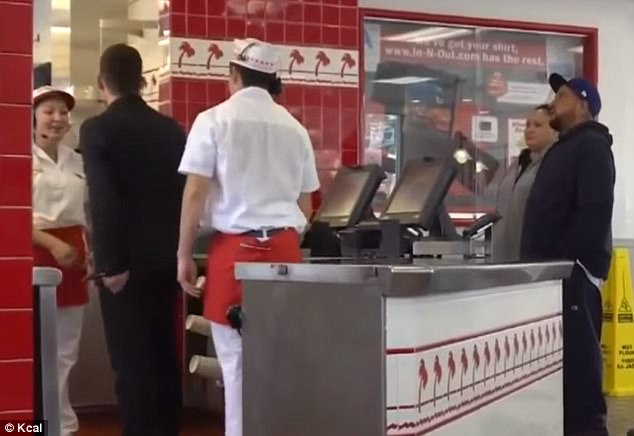 Roeder’s first visit was to this In-N-Out in Van Nuys, Los Angeles. He went behind the counter while customers lined up and told the staff he was the ‘new CEO’ who was there to performa  ‘surprise taste test’ 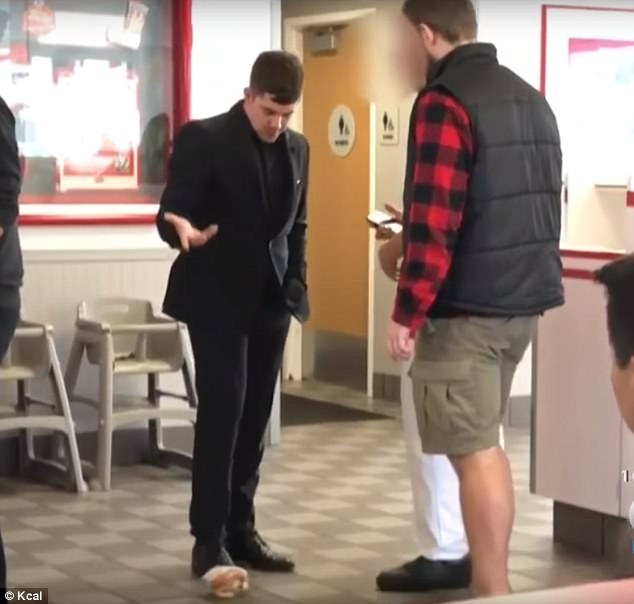 At the second restaurant, which was in Burbank, he took a customer’s burger out of his hand, threw it to the floor and stepped on it before declaring: ‘Sir, your food is contaminated’

The dubious manager replied: ‘Who are you?’

Roeder repeated,’I am actually the new CEO’ and demanded that staff make him a cheeseburger and fries but was thrown out.

He was quickly ushered out by the manager and retreated back to his car where he filmed himself as police arrived.

The following day, he visited a restaurant in Burbank, another area of Los Angeles.

In that video, he put on more of a show, grabbing food out of a customer’s hand and claiming it was not up to scratch.

In that footage, a male employee is seen telling him: ‘Sir, I am going to have to ask you to leave.’

After the videos were posted online, In-N-Out issued a security alert out among all its restaurants banning Roeder.

He jokingly tweeted about the alert, writing: ‘I look good,’ as he re-posted it on his Twitter account in a post which has since been deleted, The Orange County Register reports.

Roeder did not respond to DailyMail.com’s requests on Monday morning. 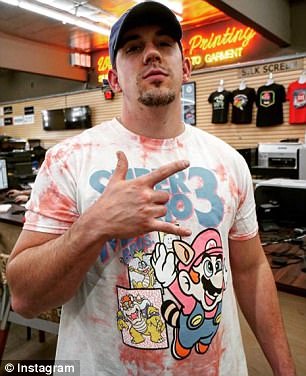 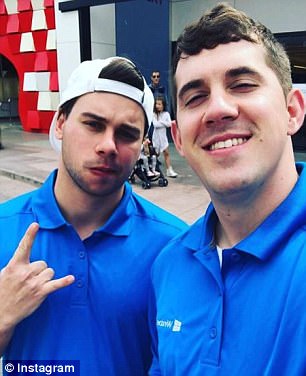 Roeder has also posed as a Windows employee (right) with a friend, presumably for another prank. Both of the In-N-Out videos had been taken down from his YouTube channel by Tuesday

It is not clear whether In-N-Out plans to drop its suit now that the videos have been removed.

Its vice president earlier said it was unfair for YouTube stars like Roeder to profit from pranks filmed in its restaurants.

‘We have recently seen an increase of visitors to our stores, who are not customers but instead are intentionally disruptive and who then try to promote themselves through social media.

‘These visitors have unfortunately used deceit, fraud, and trespass to their own advantage, and in each instance, they have attempted to humiliate, offend, or otherwise make our customers or associates uncomfortable,’ In-N-Out Executive Vice President Arnie Wensinger said in a statement. In-N-Out was asking for damages of $25,000 and a restraining order which stopped Roeder from entering its restaurants. It is not clear if it will pursue the damages now that the videos have been removed

Like many other channels of its kind, Trollmunchies receives payment for ads at the start of its videos. It also sells official merchandise on a separate site.

Among other companies it appears to have targeted is Windows, Ralph’s and Taco Bell.

On March 16, two days after the In-N-Out incidents, Roeder posed with a friend in Microsoft Windows uniforms for a social media photograph.

He captioned the image: ‘Sir, please don’t buy that POS iPhone.’ It suggested another prank in which they tried to dissuade shoppers from purchasing the Apple device.

No video of any such prank has ever been posted.