In the red after Christmas? Prepare for higher fees after overdraft charges overhaul

In the red after Christmas? Prepare for even higher fees after overdraft charges overhaul

By Sarah Bridge for The Mail on Sunday

The biggest shake-up in the overdraft market for a generation has caused the cost of going into the red to rocket.

The overhaul, prompted by City regulator the Financial Conduct Authority, has resulted in some overdraft fees doubling, prompting experts to question the logic behind the move.

From April, banks will no longer be able to charge more for unauthorised overdrafts – when someone accidentally or temporarily goes into the red or crashes over an agreed limit – than for arranged ones.

The regulator brought in the change after discovering that unauthorised overdraft fees were sometimes ten times more expensive than charges on payday loans.

The fact is that overdrafts are a lucrative source of income for banks. In 2017, they made more than £2.4billion from overdraft fees with around 30 per cent coming from unarranged overdrafts.

Although the regulator says its move will protect the most financially stretched bank customers, the banks have cynically responded by hiking up authorised overdraft fees.

Nationwide Building Society, HSBC and online offshoot First Direct, Royal Bank of Scotland, NatWest and M&S Bank have all increased charges ahead of the April reform. A number of banks have yet to respond.

The effect of the increase in authorised overdraft fees cannot be underestimated.

As the table below shows, someone with an overdraft arranged for 30 days could see fees rise by between 33 per cent (RBS and NatWest) and 129 per cent (First Direct) – to a maximum £27.98 (HSBC, Nationwide, NatWest and RBS).

Both Lloyds and its savings offshoot Halifax have higher costs – but have yet to announce how they will respond to the regulator’s demands. 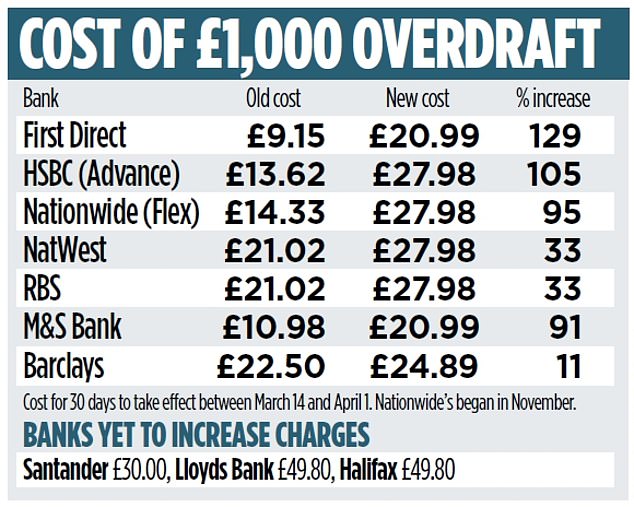 Andrew Hagger, of financial website Moneycomms, is pleased that vulnerable bank customers will no longer be hit with expensive unauthorised overdraft charges. But he is dismayed by the decision of banks to recoup the lost fees by charging customers more for agreed overdrafts.

He says: ‘Paying the equivalent of 40 per cent annual interest for an agreed overdraft looks like becoming the norm, even if you have a top-notch credit record. This is double the interest rate charged on uncleared credit card balances. Surely this isn’t the outcome the regulator was expecting.’

Hagger adds: ‘Rather than increase authorised overdraft charges, the banks could have started charging set fees for current accounts irrespective of whether customers are in credit or not. But this remains a no-no as far as the banks are concerned – nobody wants to be first to make this move.’

Helen Saxon, banking editor at financial scrutineer MoneySavingExpert, says: ‘It looks like overdraft interest rates will now congregate around the 40 per cent level.’

Santander, Lloyds and Halifax have yet to announce their changes, although their charges for authorised overdrafts are already approaching 40 per cent.

Roger Gewolb, executive chairman and founder of loan comparison website FairMoney, says the changes mean that taking out a personal loan will be cheaper for bank customers.

‘Millions of people will have spiralled into debt as a result of Christmas. We need to make consumers aware that it will be better for many to take out a loan rather than pay rising overdraft fees.’

Unlike an overdraft, which is designed to be for short-term borrowing and can be paid back anytime, a loan is over a longer fixed term. Borrowing £1,000 for three years with Santander at an interest rate of 13.5 per cent would cost £208.16 in interest in total, making it a cheaper option over the long-term, but it is more of a financial commitment and subject to a credit check.

On Friday, the regulator said: ‘We are ending excessive unarranged overdraft fees that are often ten times as high as charges for payday loans. We anticipate the cost of borrowing £100 through an unarranged overdraft will drop from a typical £5 per day to under 10p per day.’