Bosses at In The Style have revealed a ‘strategic review’ of the group, which could result in the potential sale of the business.

The fashion retailer, which has appointed Lincoln International to advise on the review, said it was not currently in talks with any potential suitor or and is yet to receive any takeover approaches

In The Style said on Thursday there had been ‘limited liquidity’ for shareholders ‘for some time’, and its freefalling share price means its current market capitalisation ‘does not properly reflect the underlying growth potential of the group, which may be better realised under an alternative ownership structure’.

Review: Bosses at In The Style have revealed they are conducting a ‘strategic review’ of the group

The group also revealed that its chief executive, Sam Perkins, will be leaving the group on 31 December.

Adam Frisby, who founded In The Style’s in 2013, will be returning to the role of chief executive on an interim basis.

Jim Sharp, chair of In The Style, said: ‘On behalf of the board, I would like to place on record my thanks to Sam for his contributions during his time as the group’s CEO.

‘Adam is excited to return to the role of CEO at this important time.

‘As the group’s founder and major shareholder, Adam is well placed to lead the business and ensure it delivers its considerable potential.’

The group also unveiled its interim results for the six months ending 30 September, which showed revenue fell by 11 per cent year-on-year to £26.6million, but remains 208 per cent higher than in the first half of 2020.

The retailer confirmed it slipped to a £3.1 million pre-tax loss by the end of the period, down from a profit of about £900,000 at the same point a year ago. It said the swing was driven by rising costs and a fall in revenues.

The group said its cash stash stood at £3.9million by the end of the period, down from £5.8million on 31 March. 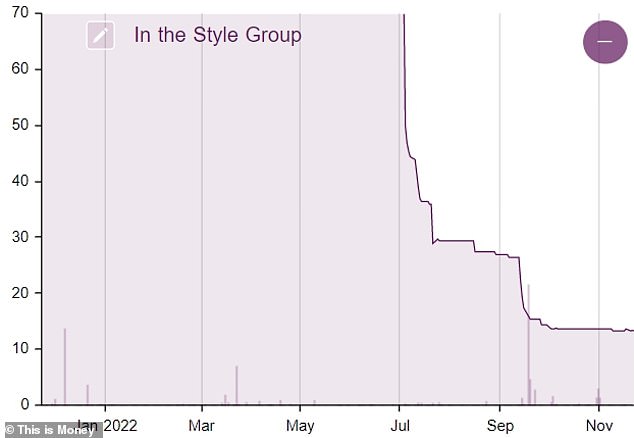 Share price saga: A chart showing how In The Style shares have fallen in the past year

In the Style said consumer sentiment and the appetite to spend on discretionary items had been hit by inflation and the uncertain macroeconomic outlook.

But, it added: ‘The Board confirms that its expectation for full year Adjusted EBITDA remains unchanged.’

Mr Frisby said: ‘We have made important progress against our strategic priorities during the first six months of the year as we look to evolve our business and re-engineer our economic model.

‘Highlights have included moving our warehouse operations, restructuring the way in which our teams work and, most encouragingly, launching FITS to a very positive customer reception.

‘Our DTC channel delivered a robust performance in the current economic environment and the Group’s core operational metrics have remained solid, with gains in engagement levels and the customer base that were made through the pandemic period being maintained which provides a strong platform for future growth.

‘We expect trading conditions to be challenging in the second half.

‘We will continue to focus on cost control and profitability, and we look forward to delivering further strategic progress over the remainder of the financial year. We remain very excited about the long-term potential of the Group .’