For the past decade there has been a simple answer to how to reliably beat inflation: put your money in an equity income investment trust.

They may not offer shoot the lights out performance, but investment trusts dedicated to dividends have provided a comfortable and solid baseline for at least matching consumer prices inflation.

The yield on the average UK equity income investment trust has tended to consistently beat inflation – and if you picked the higher yielding trusts or headed overseas for dividends, you could get CPI and then some.

That stands in stark contrast to savings accounts, which have on regular occasion paid less than inflation – losing savers’ money in real terms.

The ONS said the rate of Consumer Price Index inflation increased to 4.2 per cent in October from 3.1 per cent in September

The added advantage for investors was that on top of any dividend payouts, they also had the opportunity for capital growth from the share price return.

Even if you had managed just average performance from the Association of Investment Companies’ UK equity income sector, over the past five years you would have reaped a total return of 41.5 per cent and over the past decade it would have been 140 per cent.

This is equivalent to roughly 7 per cent and 9 per cent annually, respectively.

That’s certainly more than a savings account would have paid, which you would expect as investing in shares involves taking a greater degree of risk.

But bear in mind the UK stock market has been lacklustre compared to others – and those periods include the full-on Covid crash – and that’s not bad.

The advantage of an investment trust is that whereas a fund must pay out all dividends received, a trust can hold some back in the good years to help keep payments up in the bad.

And that’s why I’ve long held that a decent UK equity income trust makes a nice solid option for investing to match or beat inflation.

There’s a bit of a problem now though.

Consumer prices inflation was revealed yesterday to have hit 4.2 per cent and is expected to keep climbing, whereas according to the AIC, the average UK equity income trust yields 3.7 per cent.

Even these reliable investment workhorses no longer have a payout that matches inflation.

But then not all of them did anyway – even some big guns.

Contrast, for example, two very well known names: near the bottom of the yield table is Finsbury Growth & Income, with a payout of 1.89 per cent, whereas the closest big trust to the top is City of London with a 4.91 per cent dividend.

The sizeable gap between the two comes from a gap in their strategies, Nick Train’s Finsbury Growth & Income – as the tin suggests – targets both growth and income, while Job Curtis’s City of London is more income-focussed.

The latter is also notably a leading member of the Dividend Hero club, the select list of trusts with a long history of raising payouts, for which City of London can claim an unbroken 54-year run.

There are other investment trust income sectors where reliable dividends can be found – going global is often good and Asia is regularly tipped – and investors should always avoid too much home bias.

But what’s interesting about the UK income trusts is that they are invested in what is considered a still largely unloved market, but one that analysts suggest is relatively cheap and could be lined up for better times.

Last week, it emerged that JP Morgan’s analysts had changed their tune and switched from being bearish and then neutral, to advising clients to buy UK stocks.

Of course, a rerating for UK shares might not arrive, if it does it won’t be a one-way street, and there might still be better investments elsewhere.

But at a time when inflation is eating away at our savings more rapidly than it has done for a decade, the triple opportunity of a reliable dividend, from a potentially undervalued part of the global stock market, which is conveniently close to home looks tempting to me. 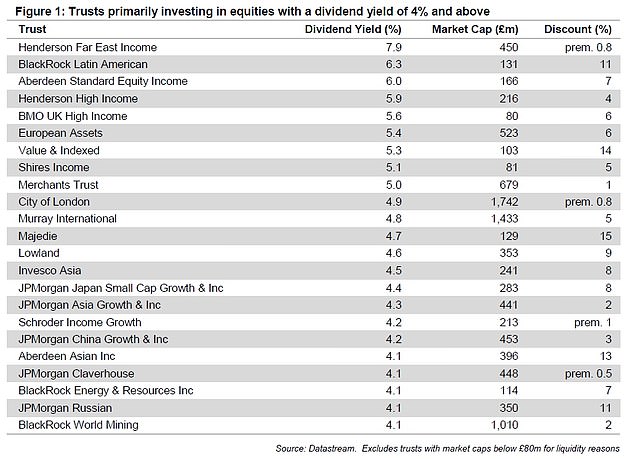