Eighty years after they first arrived in Britain having escaped atrocities in Germany – men and women retraced the tracks of the Kindertransport through the UK on Friday.

An astonishing black and white photograph showing a carriage full of smiling faces was revealed on the journey, of the Jewish children not fully comprehending the terror they so narrowly escaped, shortly before the outbreak of World War Two.

December 1, marks eight decades since the 196 Jewish children were rescued and brought to safety in Britain

Among them on the journey which took a day, was Leslie Baruch Brent, 93.

Mr Brent who boarded the train in Berlin and features in the photograph.

He told The Daily Mirror: ‘We landed after a very stormy night, everyone except me was sick.

‘We were all unslept, unkempt, unwashed and bewildered. We were in the same clothes, I had only eaten the ­sandwiches my mother gave me.

‘I brought underclothes, carefully labelled with my name which my mother had stitched, a couple of extra shirts and an extra sweater, handkerchiefs, a book or two, and a tiny little teddy bear.’

‘My mother was making sure I was smart. I arrived here in (a cravat).

Professor Leslie Brent as a teenager leaving Germany just before WWII. He has no idea why he was selected for the journey which saved his life

At the time Leslie was 13-years-old, two years younger than his 15-year-old grandson Oscar who sat by his side on the Harwich to London Liverpool Street train.

On his original journey, Mr Brent travelled from Germany to the Hook of Holland, and then sailed across the Channel to Essex.

He then took a train to London and on to Bunce Court boarding school in Kent.

The 93-year-old grandfather was born in Köslin, then in Germany but now Poland.

His beloved parents sent him to school in Berlin after anti-Semitic crimes began to rise. However, after Kristallnacht (the night of broken glass) in early November 1938 he was chosen for the Kindertransport.

Leslie had to leave behind his parents Charlotte and Arthur Baruch and an older sister Eva Susanne, aged 16. All three were transported to their deaths in 1942.

Aged just thirteen Leslie had no idea why he was selected for the transport scheme.

He told The Daily Mirror: ‘The real heroes of the Kindertransport were the parents.

‘They gave away their children without knowing where they would finish up.

‘I can see them still. They tried to maintain a stiff upper lip and not cry.

‘They waved ­handkerchiefs. I didn’t cry. To an extent it was an adventure, not realising we’d never see our parents again.’

Despite the smiles, Mr Brent said the children were told they must behave in case the Nazis, who abused children in some carriages, turned them back around.

The image was taken in Holland, when they were close to leaving mainland Europe. 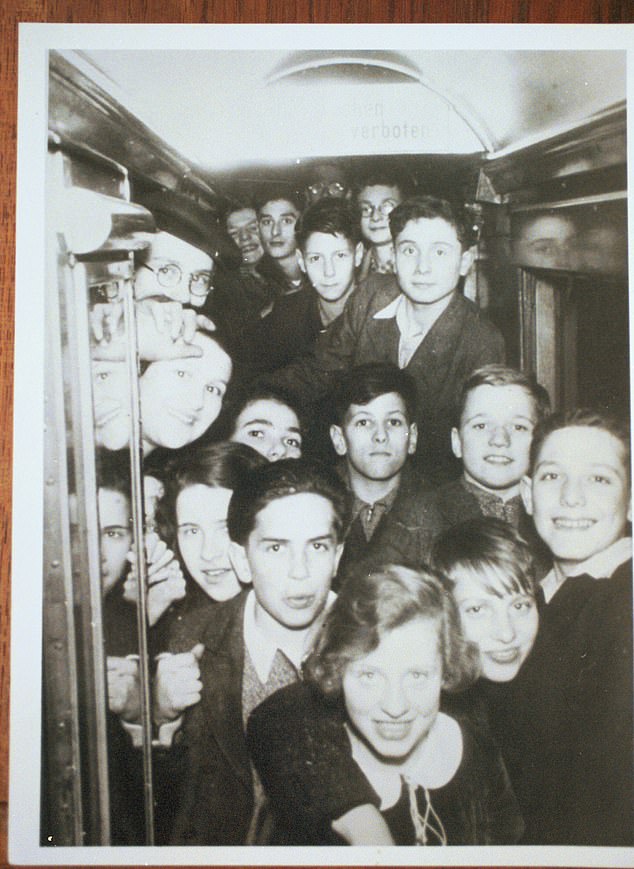 Upon arrival some children were taken in by families and others were taken to holiday camp Dover Court and on to schools.

Leslie heard from his parents via Red Cross telegrams.

In September 1942 the last one from his father said: ‘We are going on a journey.’

‘I know now he had already been told to go to an assembly point two days later. At the time I didn’t know what it meant,’ Leslie added.

Leslie joined the British army in 1943, changing his name to Brent, hoping he would be helping his family.

Decades later he found out his parents were taken to Riga, Latvia, and shot in woodland. His sister Eva had the opportunity to remain and work in a hospital instead of being swept up by Nazis to the camp but Leslie’s ‘headstrong’ sister refused to leave her parents.

Leslie has made it his mission to talk about them.

‘When I die there will be no one left who knew them. But it keeps them alive when they are in people’s memories,’ Leslie added.