Let us take you on a flight across some of Europe’s most breathtaking landscapes, courtesy of these incredible drone images.

They have been taken by 35-year-old photographer Gabor Nagy, from Budapest, and show beautiful islands, dramatic volcanic landscapes, serene lakes and stunning waterfalls above the likes of Iceland, Italy, Austria and Norway.

Gabor, from Budapest, told MailOnline Travel: ‘People like aerial photography because they can admire areas from a very different perspective. And maybe everyone dreams about flying like a bird?

‘Every photo I take is special to me because I like to shoot in hard-to-reach regions.

‘These locations are super-remote. Usually, I have to cross several glacier rivers or hike 20 to 25km (12 to 15 miles) to reach them. These pictures have their own story to me.’

Scroll down and prepare to take off…

Gabor snapped this incredible drone image over the Lofoten Islands archipelago in Norway. He always uses drones for his aerial work and said: ‘This way I can easily find new and never-before-seen compositions. Just a few years ago, I would’ve had to spend thousands of euros on a helicopter ride to capture the same pictures’ 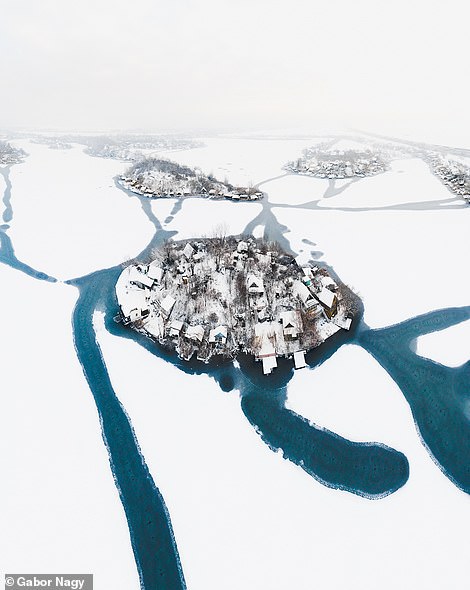 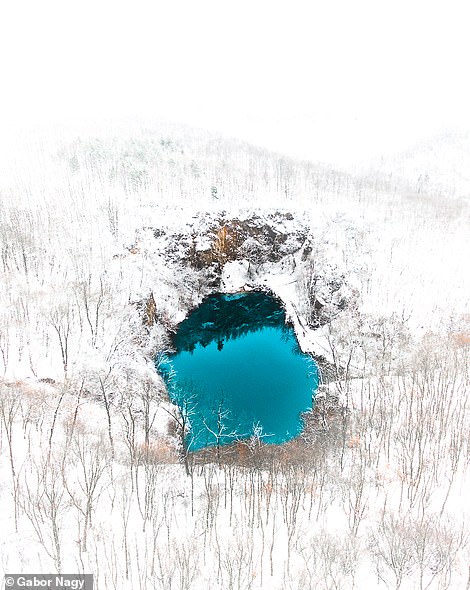 LEFT: This wintry scene shows a bird’s-eye view of Kavicsos Lake near the Hungarian capital, Budapest. Its name translates into English as Pebble Lake. According to Amusing Planet, ‘the lake sits at the site of a former pebble quarry, hence its name’. RIGHT: A beautiful lake in the small village of Apc in northern Hungary. Gabor said: ‘People like aerial photography because they can admire areas from a very different perspective. And maybe everyone dreams about flying like a bird?’ 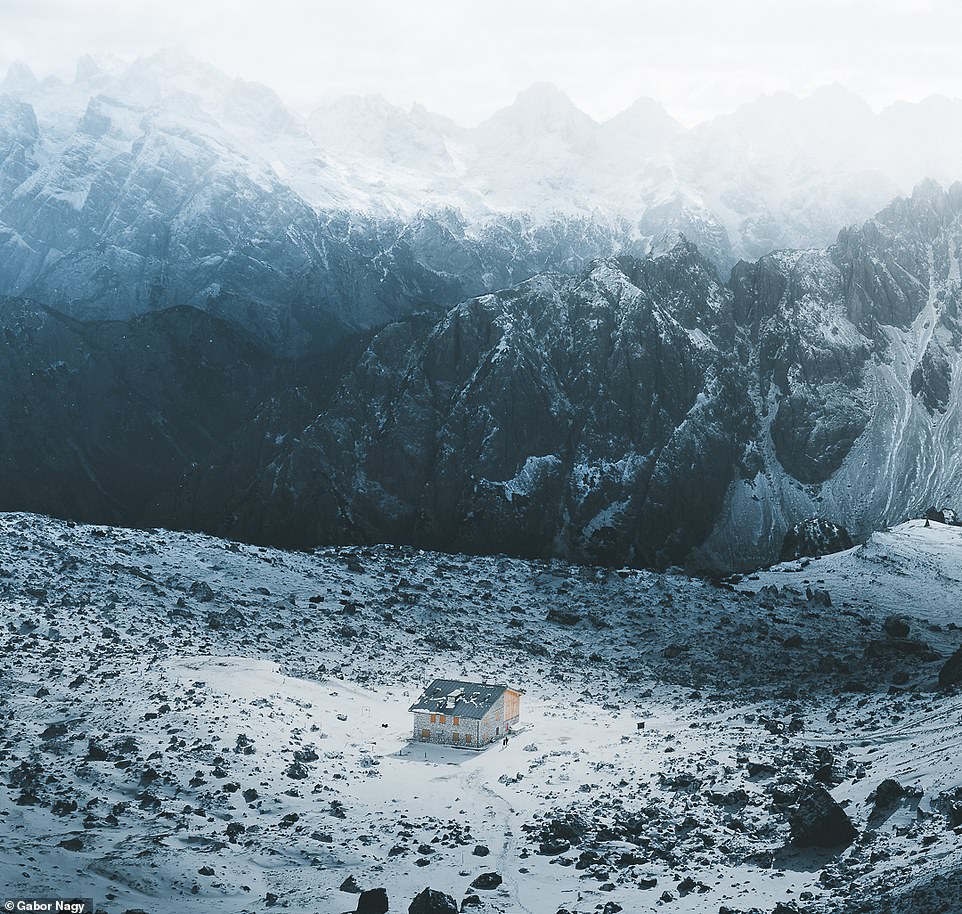 Gabor said: ‘I love being in the mountains, so I’d rather climb up to high peaks and use my cameras from there instead of just sending up a drone from the parking lot and finish shooting in literally five minutes.’ This amazing picture was taken in the Italian Dolomites 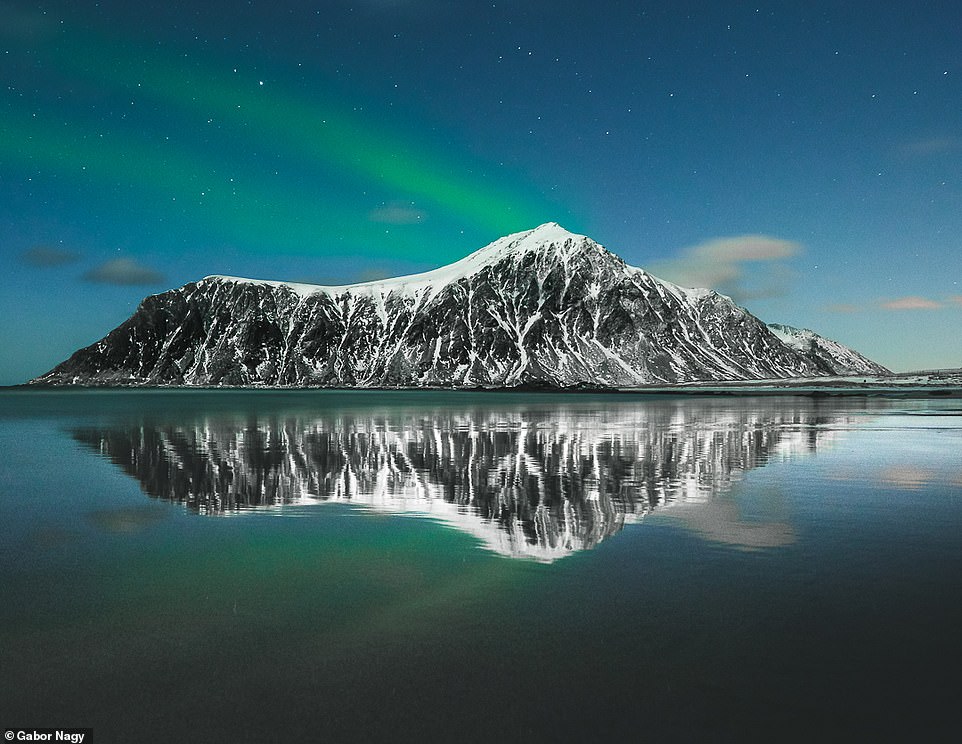 A striking shot of the Lofoten Islands. Gabor said he got involved in drone photography as a ‘natural progression’ as technology evolved. He explained: ‘The constant experimenting and opportunities of never-before-seen compositions are the things that sucked me into the genre’ 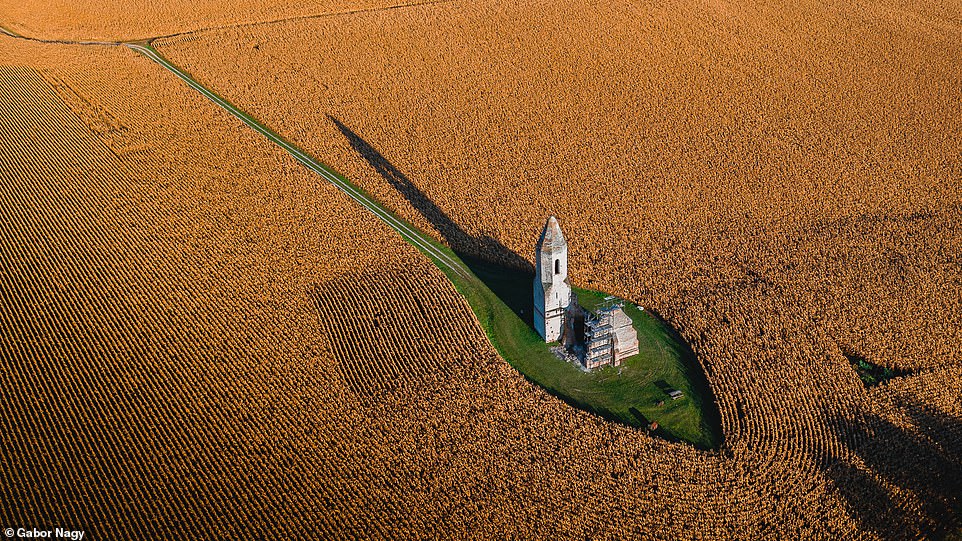 A stunning shot of the ruins of a 12th-century Gothic church near the village of Somogyvamos in western Hungary. Gabor said: ‘Most of my images are taken in very remote places without habitation because I don’t want to disturb anybody with my flying camera’ 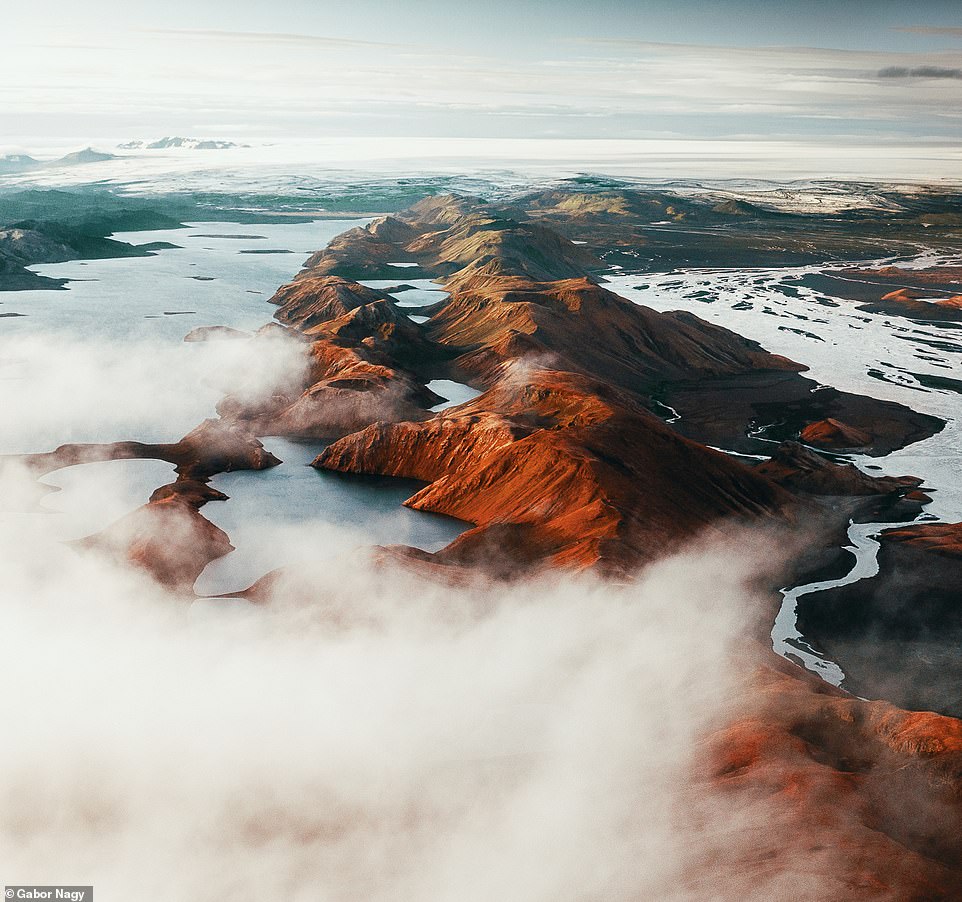 An amazing shot of Langisjor – one of the largest natural lakes in Iceland. It is located in Vatnajokull National Park, which covers approximately 14 per cent of the country. According to Lonely Planet, it contains some of Iceland’s ‘greatest natural treasures, created by the combined forces of rivers, glacial ice, and volcanic and geothermal activity’ 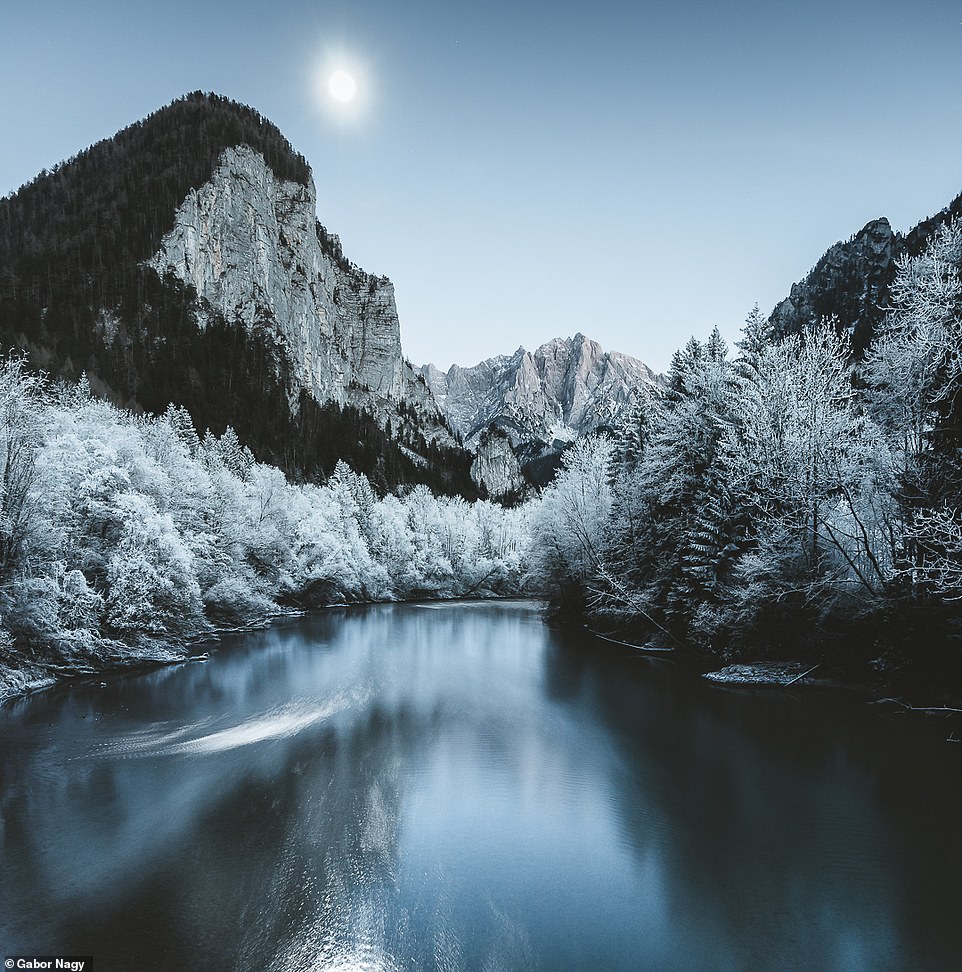 Gabor captured this serene scene in Austria’s Gesause National Park, which covers 12,000 hectares in the mountainous state of Styria 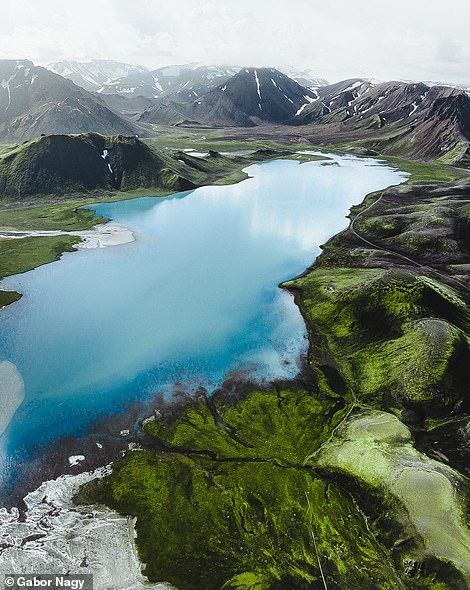 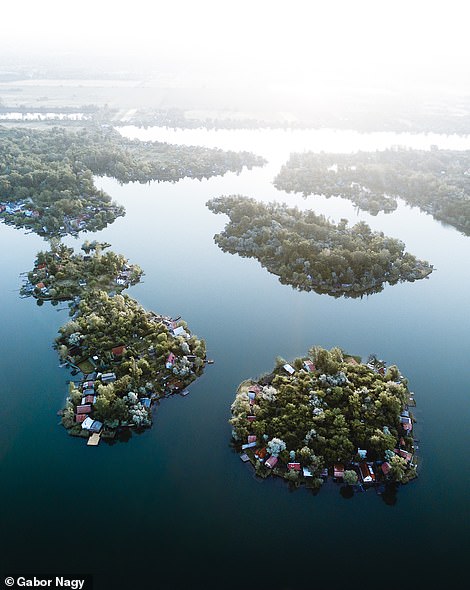 LEFT: A stunning shot of Iceland’s Landmannalaugar area, known for its geothermal activity. Gabor said: ‘I’ve always been fascinated by the endless summer nights in Iceland when the sunsets are three hours long.’ RIGHT: Another spellbinding shot of Kavicsos Lake, which Gabor joked is like the ‘Hungarian Maldives’. According to Amusing Planet, once the quarry that formerly sat on the site of the lake closed, its excavated pits began to fill with rainwater creating the lake. It added: ‘Nature has reclaimed the area and rich wildlife has taken root in and around the lake’ 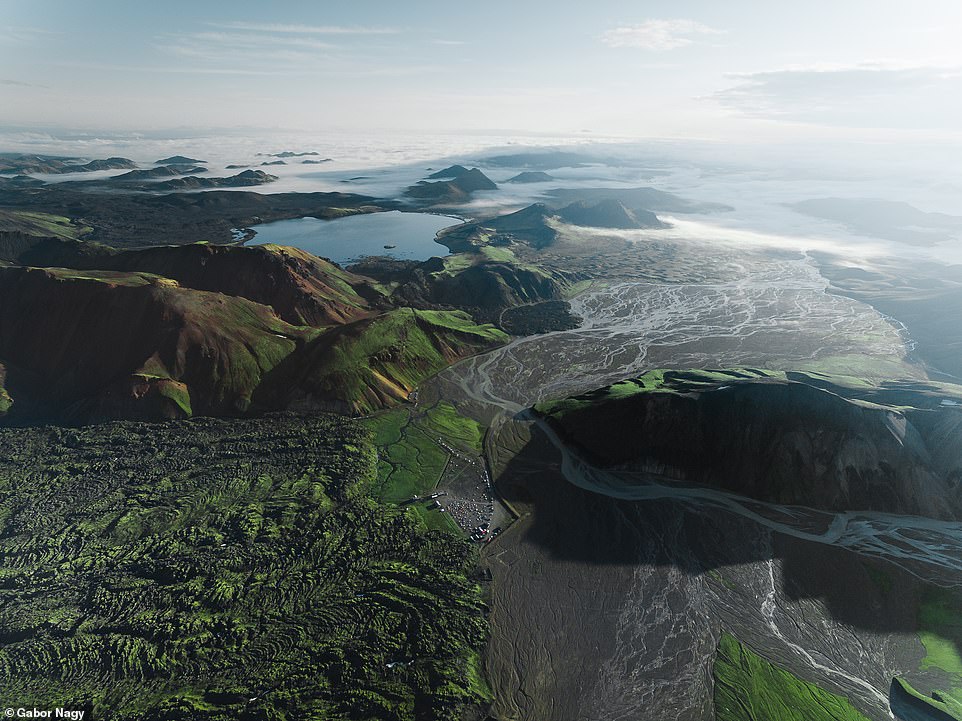 Gabor said: ‘Every photo I take is special to me because I like to shoot in hard-to-reach regions. These locations are super-remote. Usually, I have to cross several glacier rivers or hike 20 to 25km (12 to 15 miles) to reach them.’ Pictured is the beautiful landscape of the Landmannalaugar area of Iceland 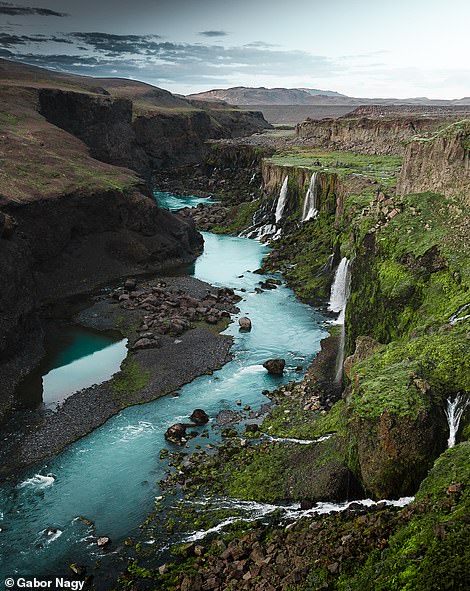 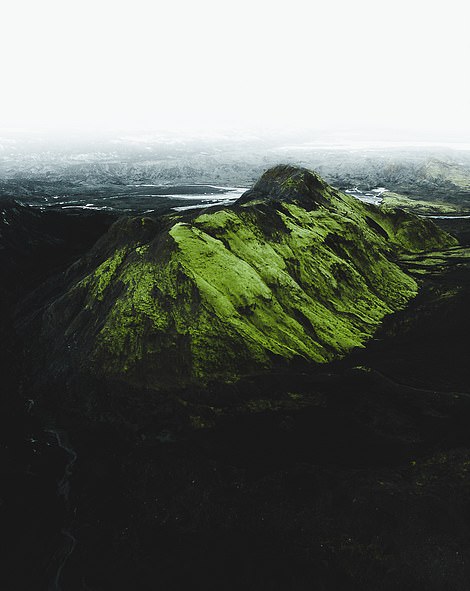 LEFT: This stunning image shows the Sigoldqugljufur canyon in the Icelandic Highlands. According to Guide to Iceland, it is known as the ‘Valley of Tears’ and ‘earned its nickname from its sheer number of waterfalls’. RIGHT: Another beautiful shot taken in the Highlands of Iceland. Gabor said: ‘These pictures have their own story to me’ 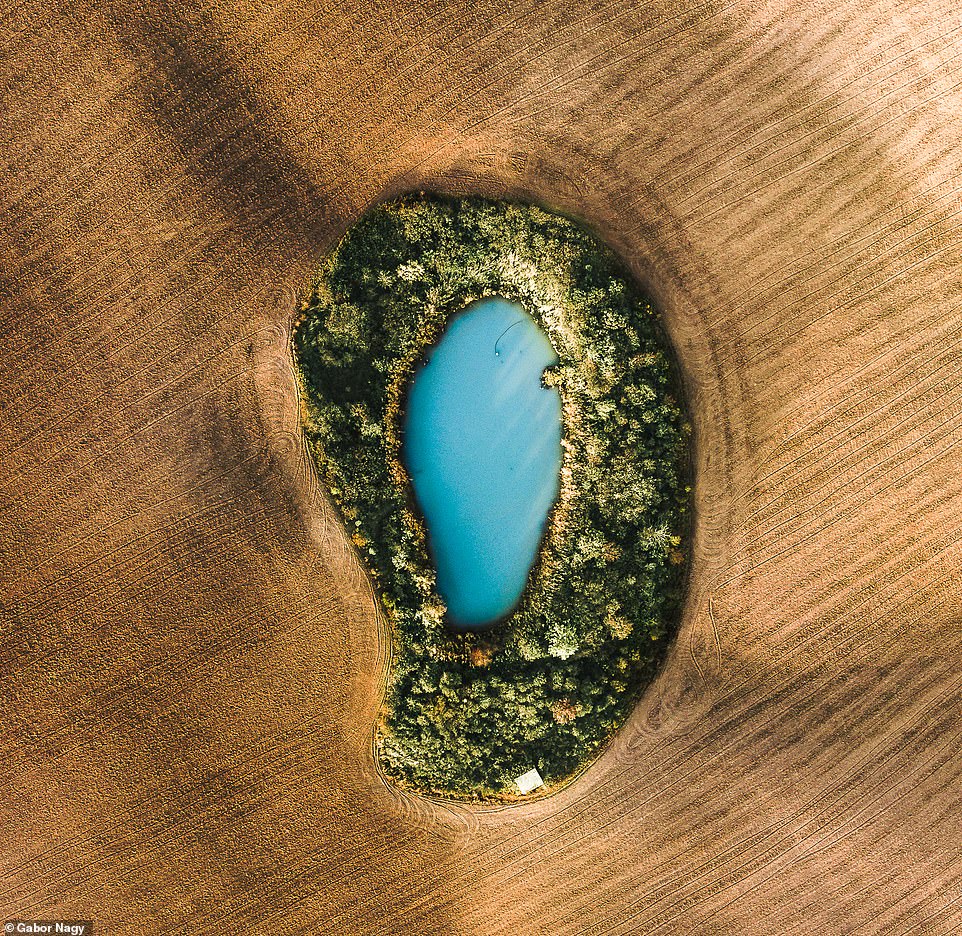 Gabor captured this mesmerising scene near the stunning town of Pienza in Tuscany. He wrote on Instagram: ‘I visited this extraordinary region to capture the unbeatable vibes of the Tuscan autumn with my cameras and, of course, I wasn’t disappointed. Sometimes I felt like I was flying above an infinite yellow sea’ 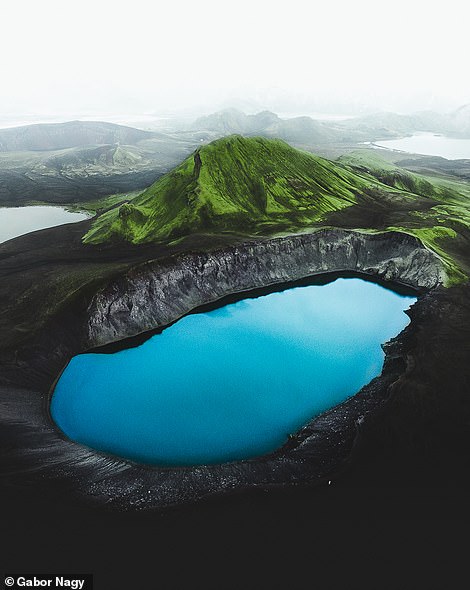 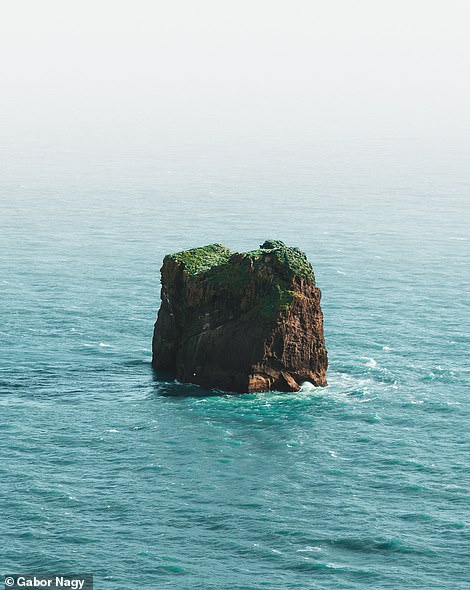 LEFT: This eye-popping shot shows Blahylur – a crater lake in the Icelandic Highlands. Guide to Iceland describes it as a ‘magnificent body of water nestled in a dormant volcanic crater’. RIGHT: Gabor snapped this amazing image off Iceland’s Dyrholaey peninsula. After posting this image to Instagram, one follower wrote: ‘Mesmerising image. Like a star in the ocean’ 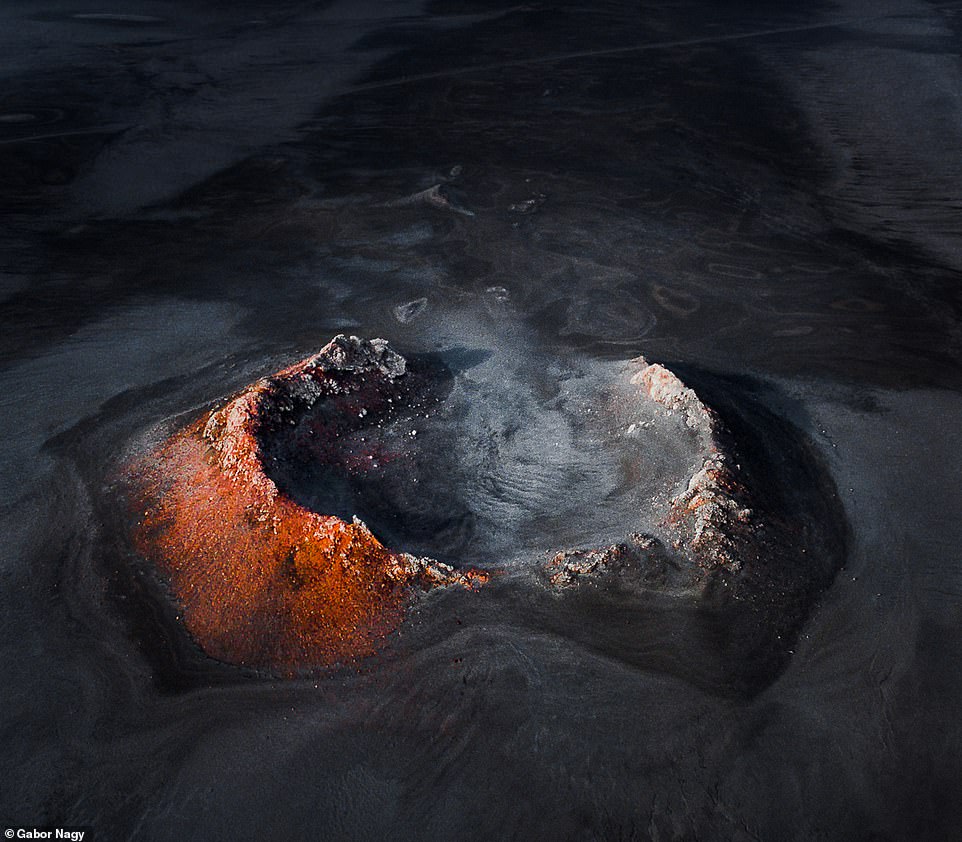 Gabor described this shot as showing a ‘black hole’. He snapped it over the volcanic landscape of the Highlands of Iceland. He added: ‘I spent nearly two months on Google Earth flying over the Highlands of Iceland searching for these incredible red craters, then I saved the exact locations and scouted the F roads [main roads] that lead to them. It was so good to see this incredible phenomenon with my own eyes and capture them properly’ 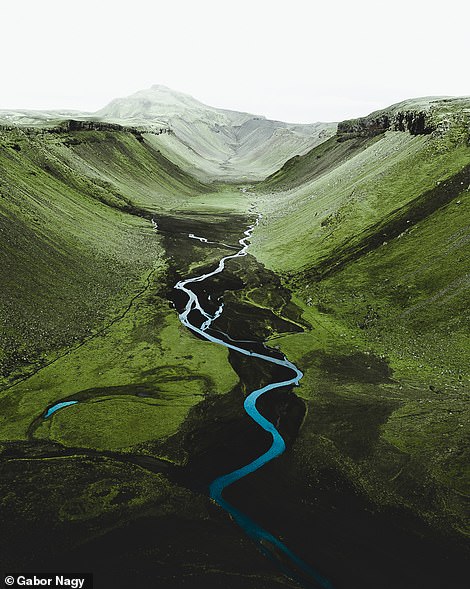 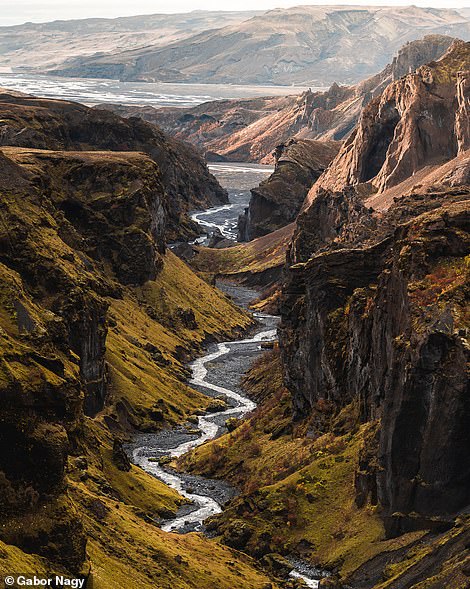 LEFT: An epic shot showing Iceland’s Eldgja, the largest volcanic canyon in the world. It is 40km (25 miles) long, 885ft (270m) deep and at its widest point is 1,968ft (600m) wide. RIGHT: Gabor snapped this incredible image at the Hvannargil canyon in Iceland. He pointed out on Instagram: ‘Even though most of the valley is covered by golden birch forests in the autumn, the closer you hike to the glaciers the greener the valleys become’ 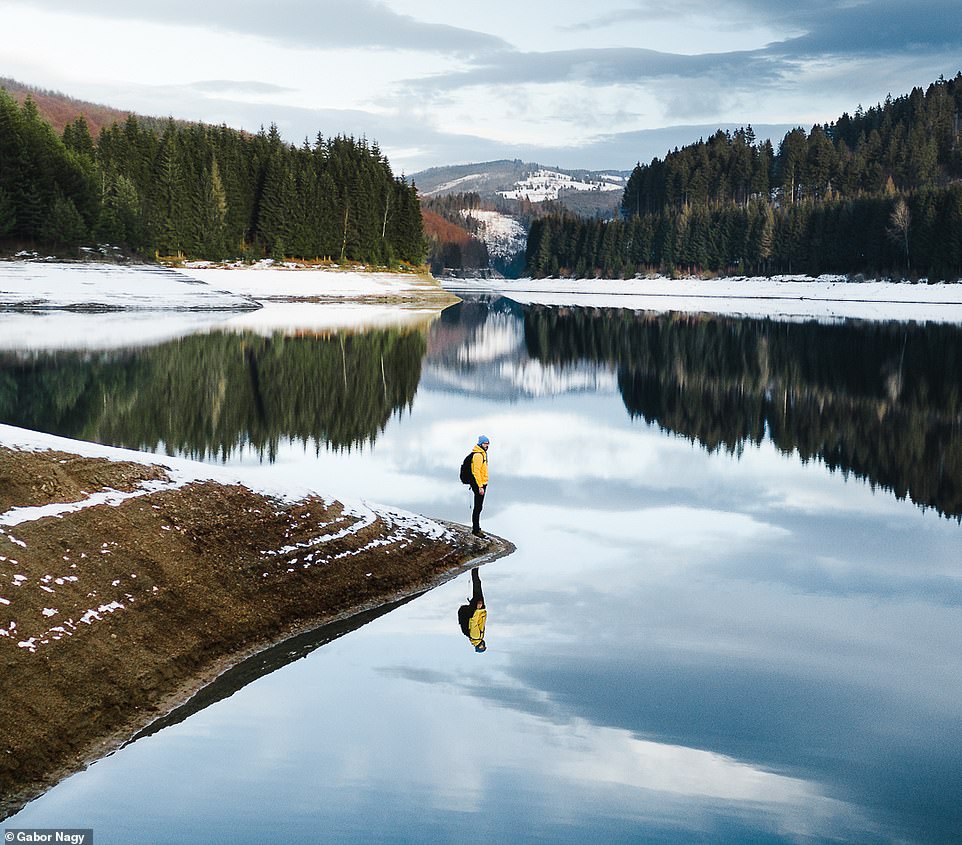 A spectacular shot taken near the town of Hrinova in Slovakia that stars Gabor. Giving tips to budding drone photographers, he said: ‘Respect the rules, always do your research before flying, know your gear inside out, have at least six batteries, shoot in panorama mode, change the SD card between flights and always record videos as well’