Residents of Southern California and Arizona were startled just after dusk last Friday when a strange alien-like white light shot across the sky.

However, it turned out to be a SpaceX rocket launch, and now a stunning time-lapse video has captured the footage with over a thousand high-resolution images taken from Yuma, Arizona.

The streak of white light created a fish-shaped pattern, which prompted locals to speculate on social media as to what it was.

Elon Musk fuelled speculation with a mischievous tweet referring to it as a ‘nuclear alien UFO from North Korea’.

SpaceX plans its first trip to the red planet in 2022, carrying only cargo, to be followed by a manned mission in 2024 and Musk said he would ‘cannibalise’ SpaceX’s other products to pay for it.

Instead of operating lots of smaller spacecrafts to deliver satellites, the BFR would complete all missions.

The rocket would be partially reusable and capable of flight directly from Earth to Mars, could still carry 100 passengers, and could also be used for fast transport on Earth, Musk said.

The stunning time-lapse 40-second video was taken by photographer Jesse Watson in Yuma, Arizona, over 400 miles away from the site launch.

He said of the project: ‘I have never shot a rocket launch before, so I did not know exactly what to expect as far as exposure or precise location of the rocket in the horizon.

‘I wanted to be prepared to capture comprehensive coverage of the spectacle.

Celebrities in California that witnessed the rocket launch, were wary of the incredible sight.

‘What the heck is this weird jellyfish thing going across the sky right now!?!’ tweeted actress Jenna Fischer The Office.

Celebs in California were amazed by the incredible sights of the sky above them with Demi Lovato tweeting: ‘I’m calling b******* on SpaceX’s excuse. That s****s a UFO and there’s been others like that have been seen that are just like it!!’

Despite celeb disbelief and a Twitter outcry, Elon Musk confirmed that it was indeed a SpaceX rocket launch. 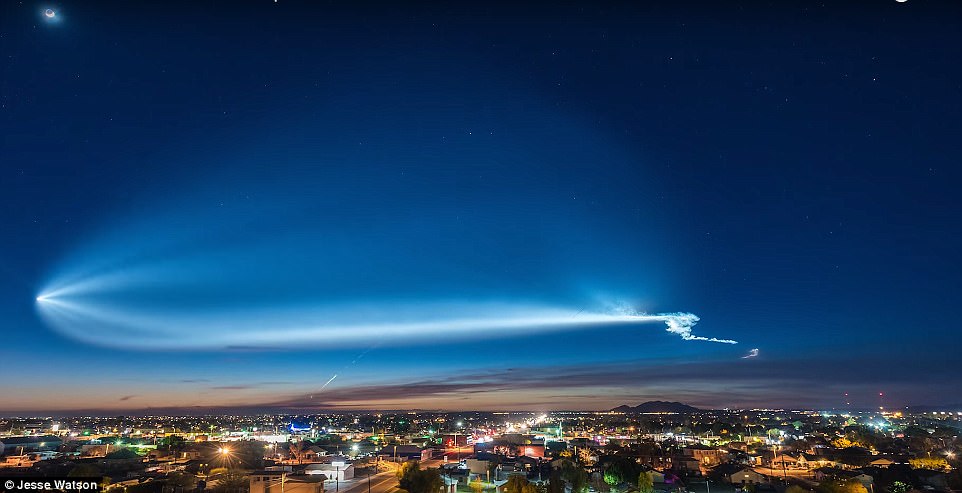 The streak of white light would create what turned out to be a fish-shaped pattern, prompting locals to speculate on social media as to what it was. Initially, some people thought it may have been a UFO or the prelude to an alien invasion

The stunning time-lapse 40-second video was taken by photographer Jesse Watson in Arizona, over 400 miles away from the site launch

Local television stations as well as law enforcement agencies received a number of telephone calls from amazed witnesses who were eventually told that what they saw was a rocket launch from Vandenberg Air Force Base in central California.

One news report said that at least 130 people in just one part of Los Angeles County called 911.

The launch in the setting sun created a shining streak that was widely seen throughout Southern California and prompted puzzlement and even concern.

Cars pulled over on freeways so drivers could take pictures.

Initially, some people thought it may have been a UFO or the prelude to an alien invasion.

Initially, some people thought it may have been a UFO or the prelude to an alien invasion. There was also talk of a possible nuclear strike by North Korea 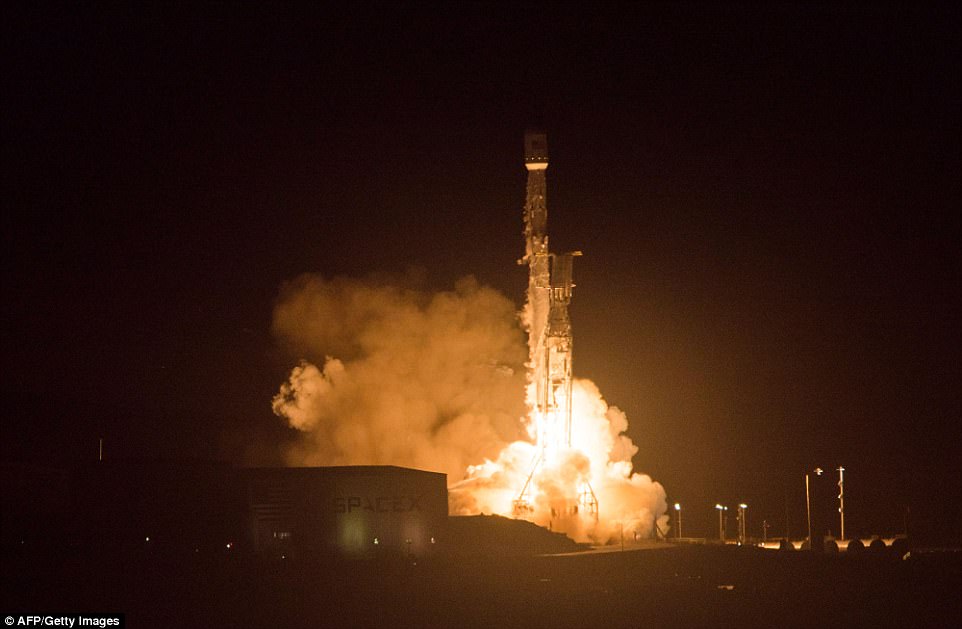 The SpaceX Falcon 9 rocket launches from the Space Launch Complex 4 at Vandenberg Air Force Base in Lompoc, California 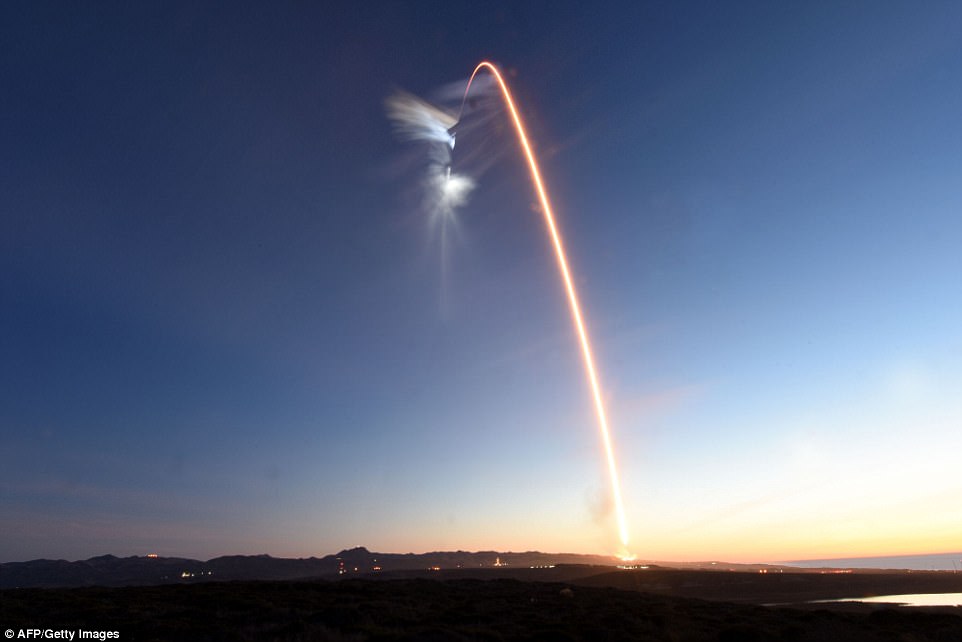 SpaceX blasted off a re-used Falcon 9 rocket carrying 10 satellites into orbit, its fourth launch toward a $3 billion upgrade to Virginia-based Iridium’s mobile, voice and data network 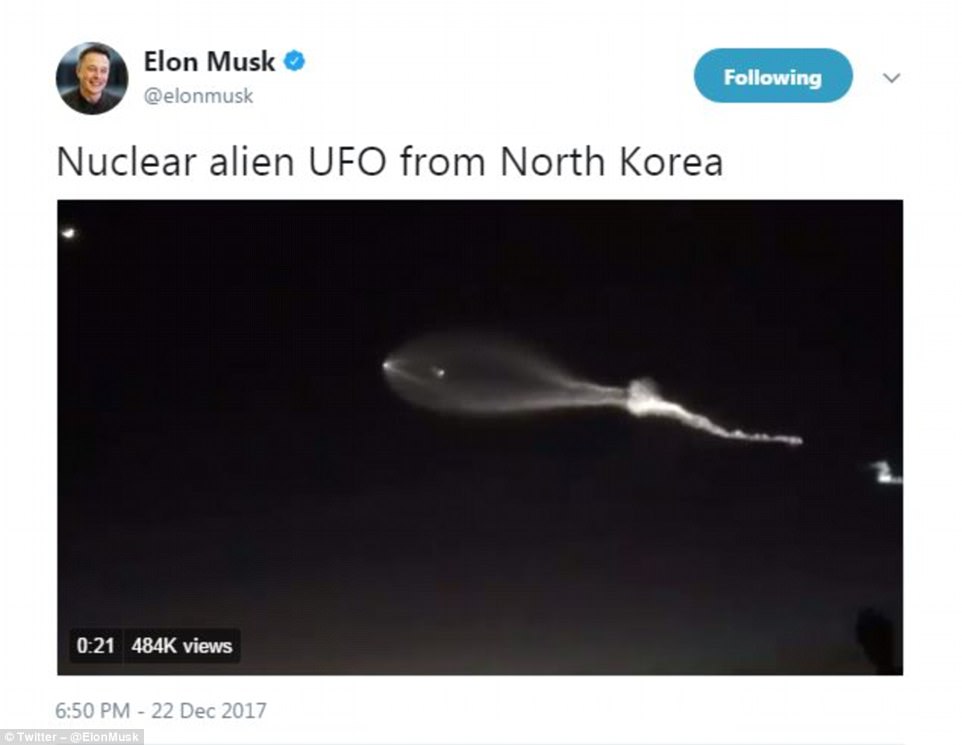 Elon Musk, the CEO of SpaceX, quipped on Twitter that the object in the sky was a ‘nuclear alien UFO from North Korea’

There was also talk of a possible nuclear strike by North Korea.

Footage of the rocket launch was also captured by a viewer of KTLA-TV. 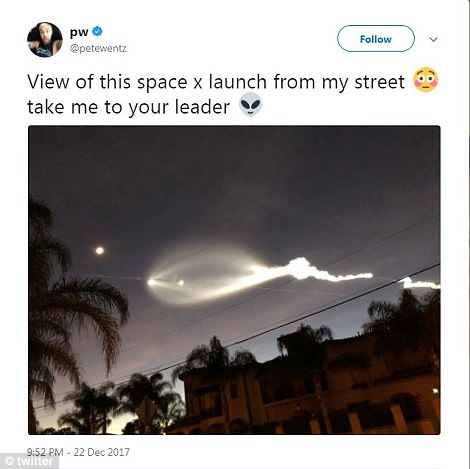 Elon Musk, the CEO of SpaceX, quipped on Twitter that the object in the sky was a ‘nuclear alien UFO from North Korea.’

Twitter users were having a ball with the sighting.

‘#SpaceX gotta give a better Public notice… I aint know if this was a Rocket, aliens, Santa Claus, or North Korea,’ tweeted one user.

The reused SpaceX rocket that was launched on Friday carried 10 satellites into space from California.

The Falcon 9 booster lifted off from coastal Vandenberg Air Force Base shortly before 5:30 p.m. Friday.

It carried the latest batch of satellites for Iridium Communications.

The same booster carried Iridium satellites into orbit in June.

That time, it landed on a platform in the Pacific. This time, the rocket plunged into the sea.

It was the final launch of 2017 for SpaceX, which was contracted to replace Iridium’s system with 75 new satellites.

The Los Angeles Fire Department issued an advisory that the ‘mysterious light in the sky’ was from the rocket launch.

Jimmy Golen, a sports writer for The Associated Press in Boston who was in Southern California for the holidays, said he and other tourists saw the long, glowing contrail while touring Warner Bros. studio in the Los Angeles suburb of Burbank.

‘People were wondering if it had something to do with movies, or TV or a UFO,’ he said. ‘It was very cool.’

The same rocket carried Iridium satellites into orbit in June. 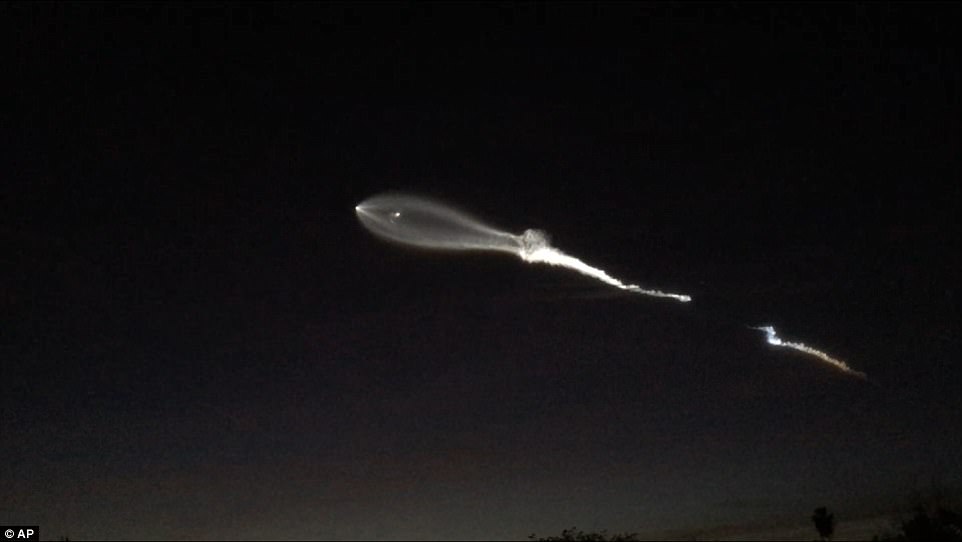 But it turns out it was the contrail from a SpaceX Falcon 9 rocket as seen above from Pasadena, California 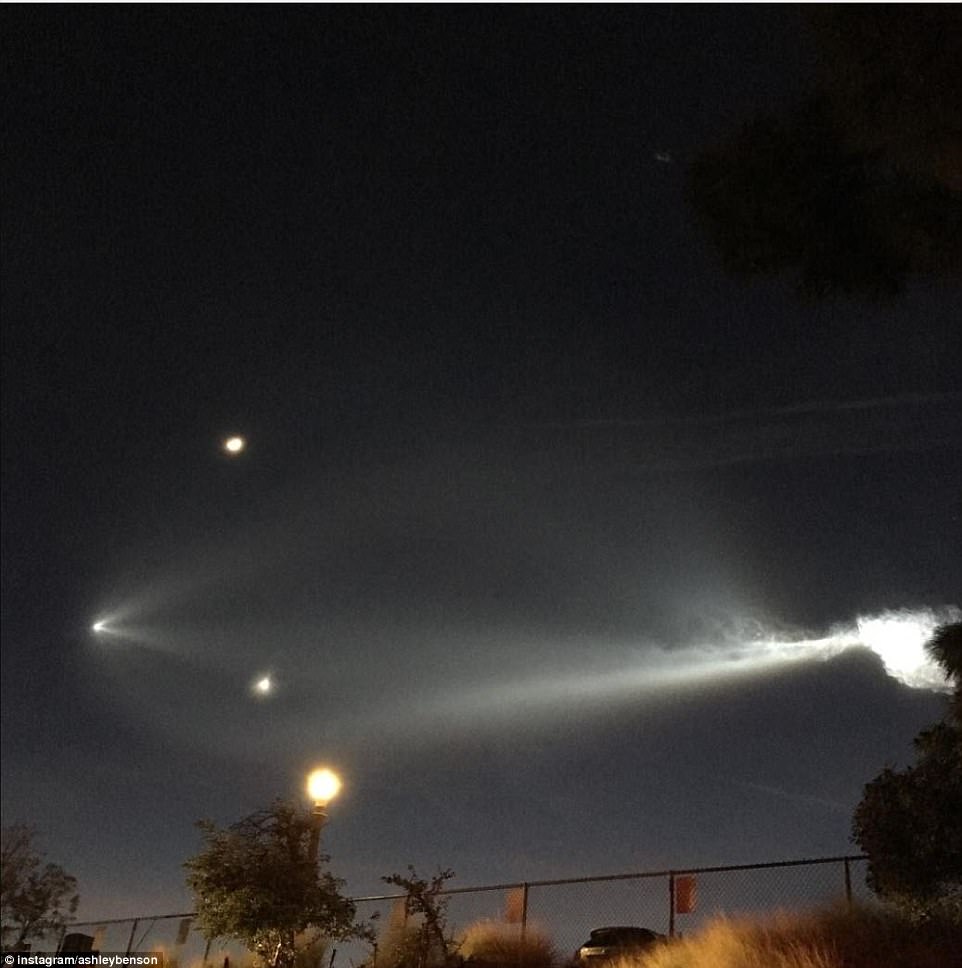 Instagram user Ashley Benson uploaded this photo, writing: ‘So this just happened while I was hiking’ 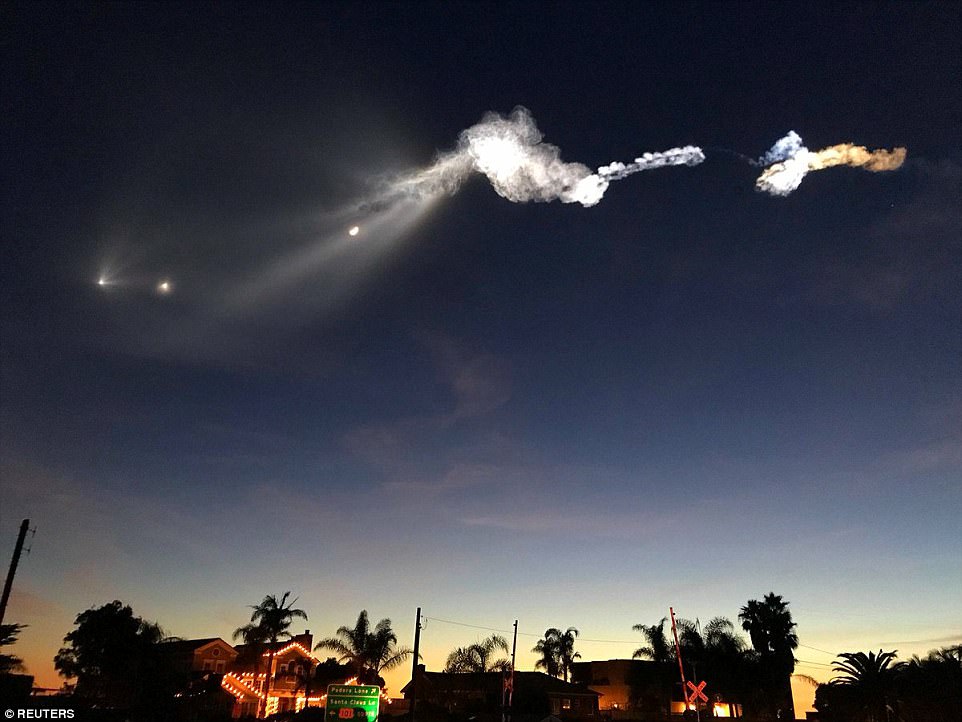 The twilight effect from a SpaceX Falcon 9 rocket launched from Vandenberg Air Force Base carrying 10 Iridium voice and data relay satellites is shown in a view from US Highway 101 and Padaro Lane in Carpinteria, California on Friday 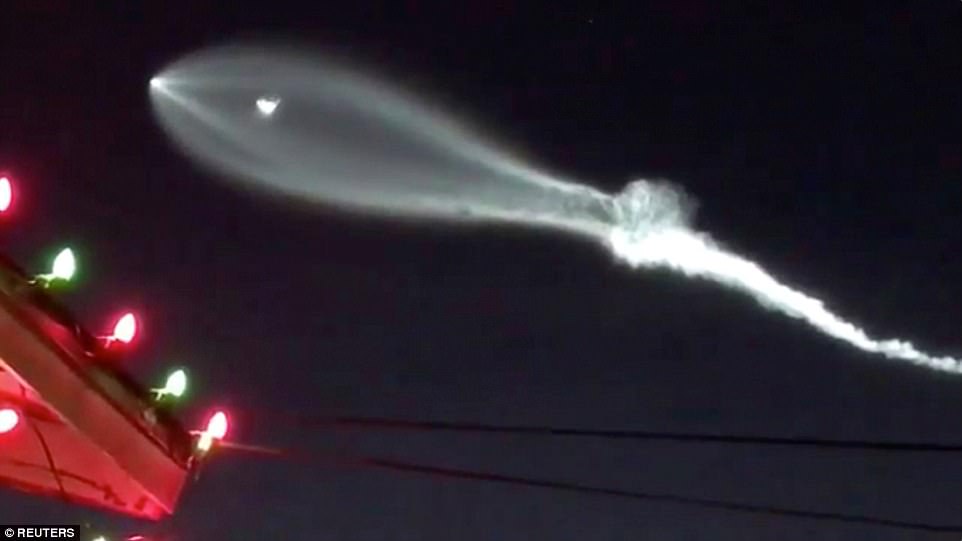 The SpaceX Falcon 9 rocket is seen from El Sugundo, California. This photo was taken by Twitter user Amanda Stiles

It was the 18th and final launch of 2017 for SpaceX, which has contracted to replace Iridium’s system with 75 updated satellites. 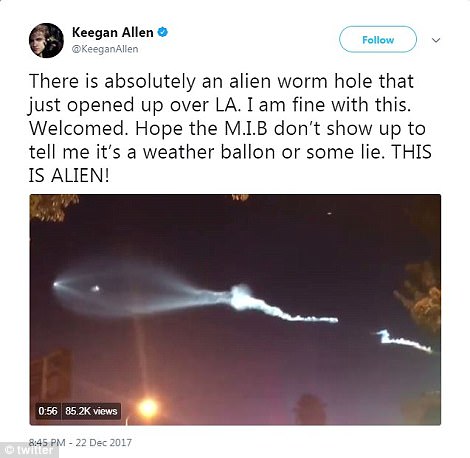 SpaceX has made four launches and expects to make several more to complete the job by mid-2018.

Last week, Musk revealed the giant rocket he hopes will take man to the moon and Mars.

Scheduled to blast off from Cape Canaveral on the same pad as the Saturn V Apollo 11 moon rocket on its first unmanned mission next month, Musk has boasted it will have double the thrust of the next largest rocket in use.

He also says it will carry his own Tesla Roadster, which will be sent flying towards Mars. 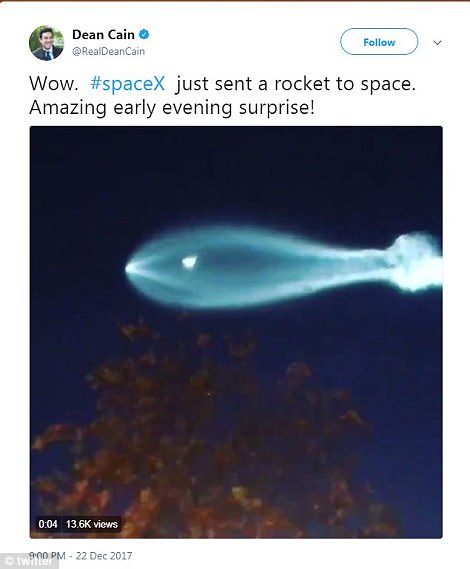 Musk also tweeted an incredible image of people next to a landed rocket to give an idea of the scale of the machines.

‘I love that rocket so much.’

He also confirmed the rocket will have a ‘max thrust at lift-off is 5.1 million pounds or 2300 metric tons,’ adding the first mission will run at 92%.

‘Falcon Heavy to launch next month from Apollo 11 pad at the Cape. Will have double thrust of next largest rocket. Guaranteed to be exciting, one way or another,’ Musk originally posted.

The mission marked SpaceX’s most ambitious project to date.

Musk founded SpaceX in 2002, with the aim of reducing space transportation costs and enabling the colonization of Mars.

The 46-year-old South African is also the CEO of Tesla, and predicts Falcon Heavy’s payload will stay in deep space for a while.

Although the public announcement shoots for next month, the date is not set in stone, with the ambitious CEO known for getting ahead of himself and periodically missing release dates.

Earlier last week SpaceX said it had delayed the launch of its giant Falcon Heavy rocket until 2018.

The firm said it was still on course to test the rocket in a static fire trial this year. 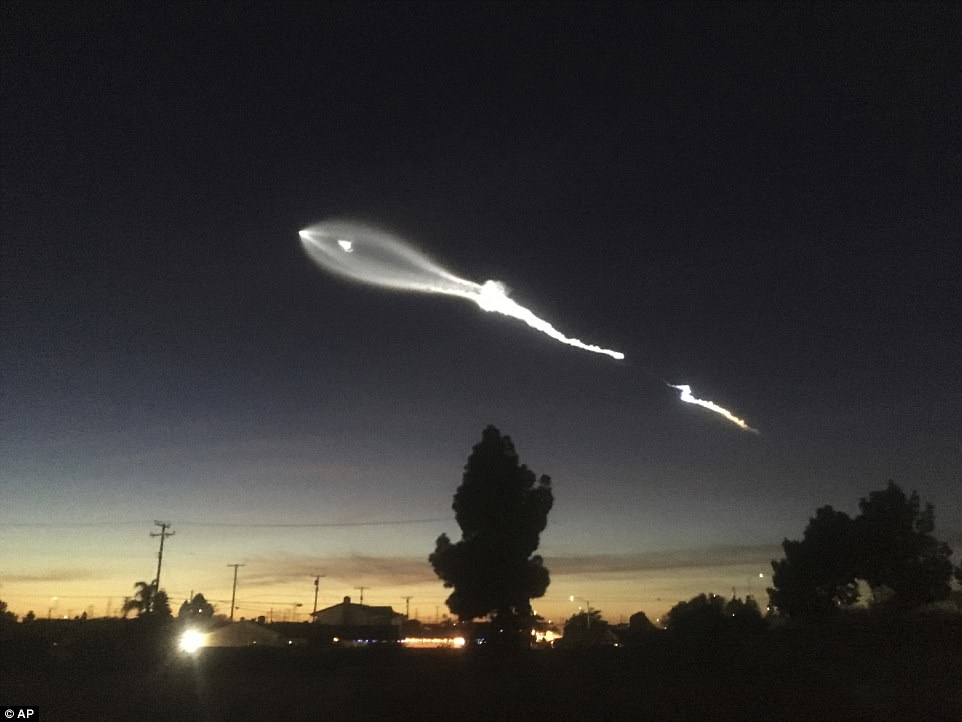 In this photo provided by Javier Mendoza, the contrail from a SpaceX Falcon 9 rocket is seen from Long Beach, California 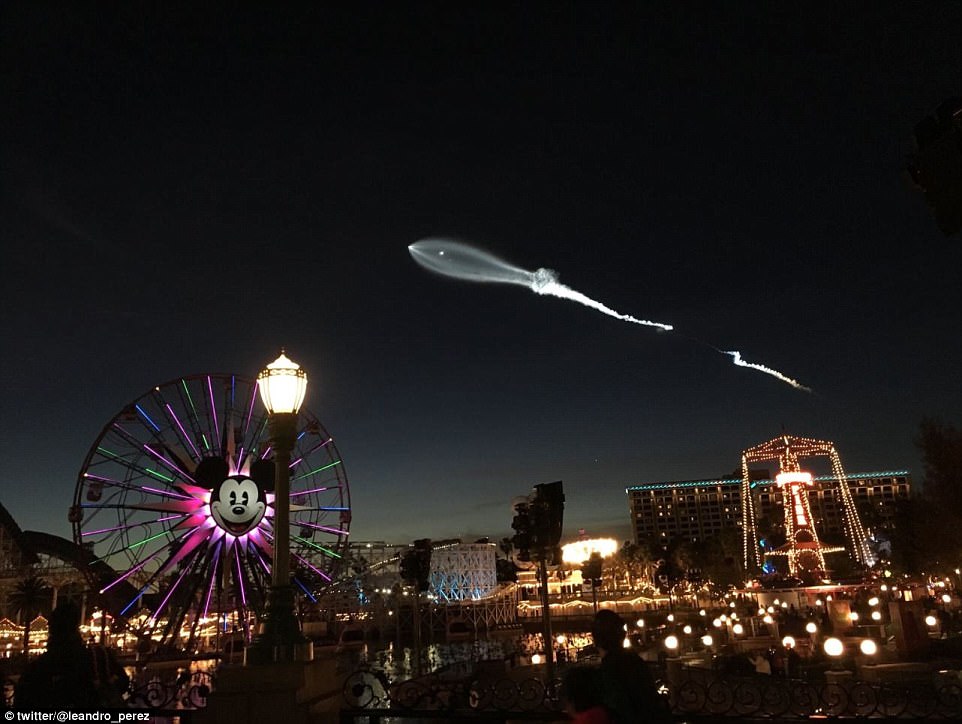 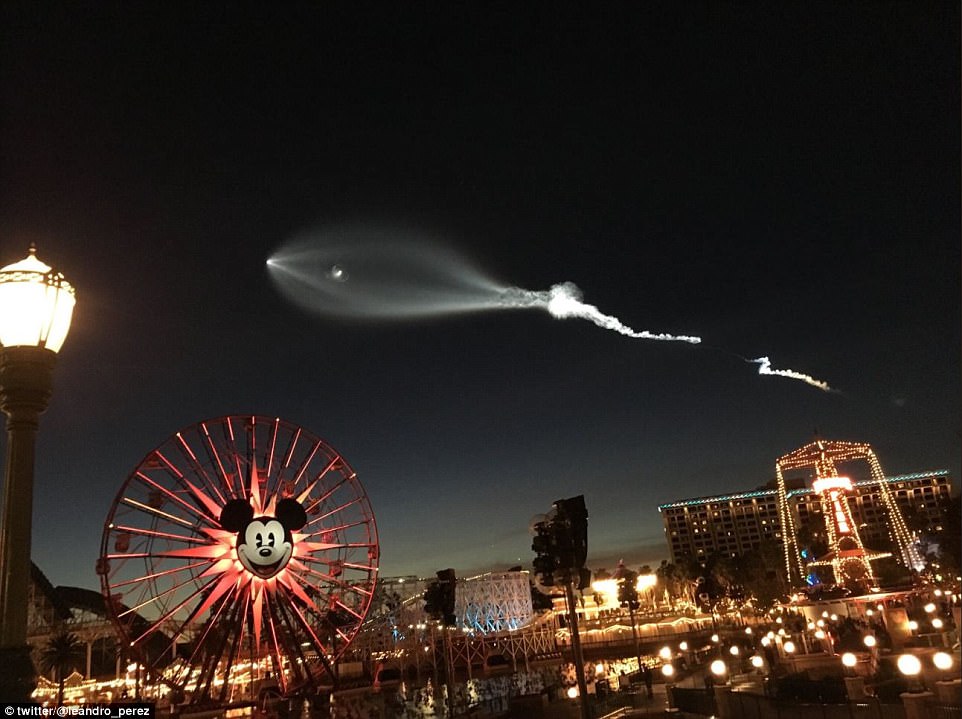 Falcon 9 is a family of two-stage-to-orbit medium lift launch vehicles, named for its use of nine first-stage engines 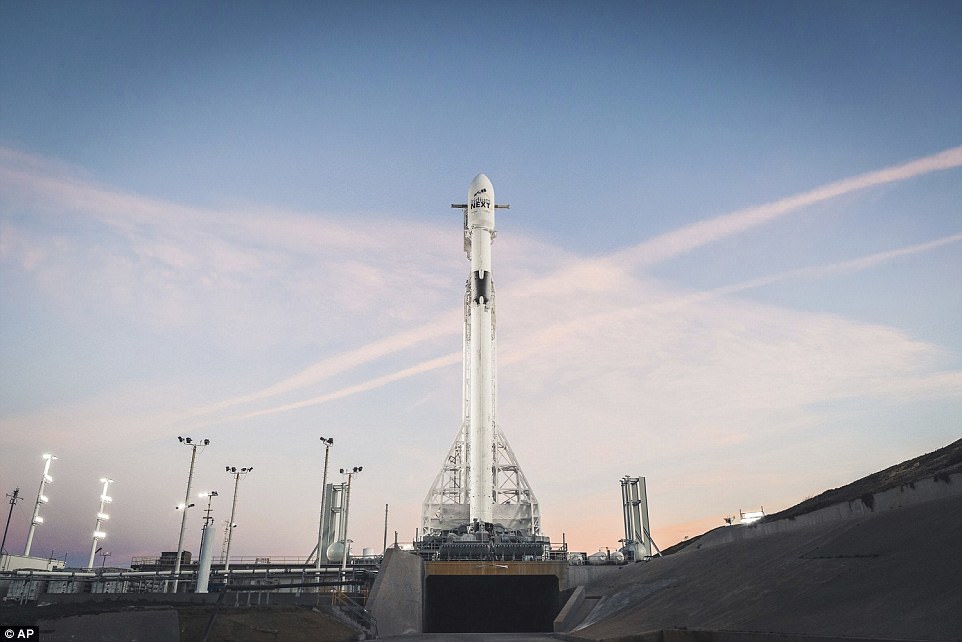 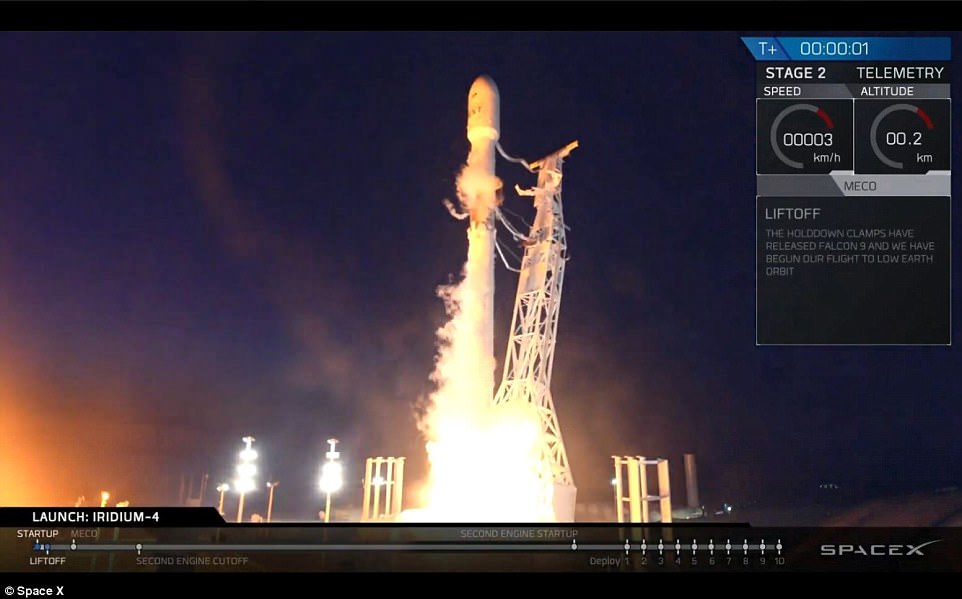 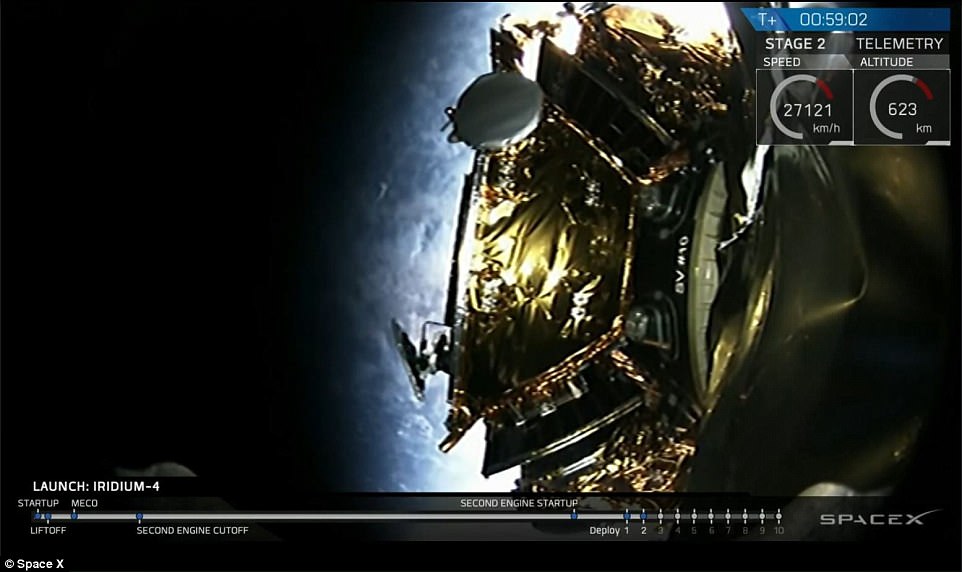 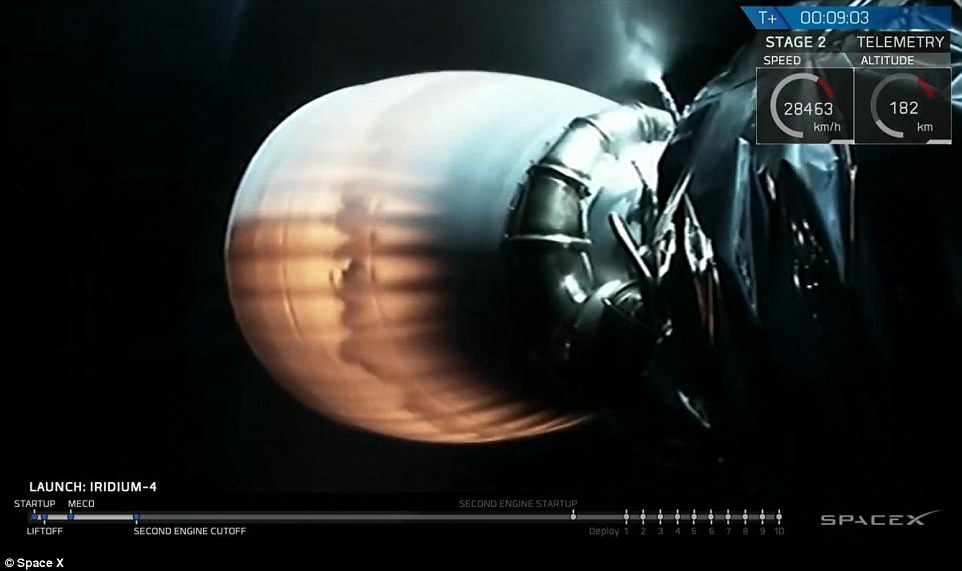