Incredible footage shows a teenage girl singing her way through brain surgery in order for doctors to preserve her musical talent.

Kira Laconetti, 19, a self-taught musician, began experiencing difficulty when singing or listening to music, having two-minute ‘glitches’ and stuttering her words.

An MRI scan on the performer from Lynden, Washington, revealed a marble-sized mass in the right temporal lobe of her brain. The benign tumour was confirmed to be triggering a rare disorder called musicogenic epilepsy.

The condition, which is estimated to affect one in ten million people, according to Epilepsy Society, triggers seizures caused by certain types of music or frequencies of pitch for which the person’s brain has a low tolerance for. It is unclear what specific notes or music prompted Miss Laconetti’s seizures.

Surgeons removed the teenager’s tumour while she was belting her favourite songs and belting out one of her favourite songs, Weezer’s ‘Island in the Sun’. The approach allowed them to identify and therefore avoid the areas of the brain she uses when she sings.

Surgeons performed surgery on Kira Laconetti, 19, as she sang. The approach allowed them to remove a bening tumour whilst identify, and avoiding, the areas of the brain she uses to sing 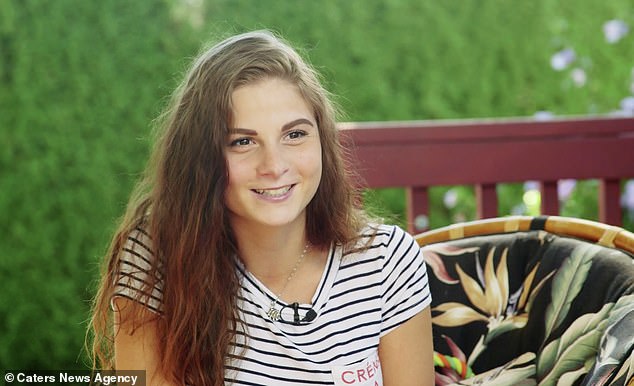 Miss Laconetti, of Washington, began experiencing two minute ‘glitches’ when singing or listening to music. A marble-sized mass was confirmed to be causing a condition called musicogenic epilepsy. The performer worried it would ruin her life and rob her of her voice 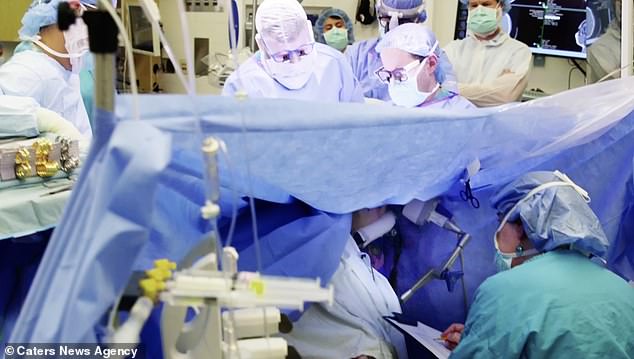 Miss Laconetti has been singing and performing for most of her life. Four years ago, she began to notice something strange.

She was experiencing ‘glitches’ and fatigue, which turned out to be seizures – defined as bursts of electrical activity that affect how the brain works.

But Miss Laconetti believed her symptoms to be an inevitability for any serious performer practicing as much as she did.

‘It was as if a light switched off in my brain’, she said.

‘Suddenly I was tone deaf – I couldn’t process the words in time with the music and I couldn’t sing.’

Miss Laconetti became incoherent during these episodes, until she was taken to Seattle Children’s Hospital for an MRI scan to determine the cause.

It was there that her world fell apart.

She said: ‘In a sort of twisted joke from the universe, the tumour was right inside the area of my brain that controls my hearing and singing ability.

‘Messing with it could permanently affect my voice.’ 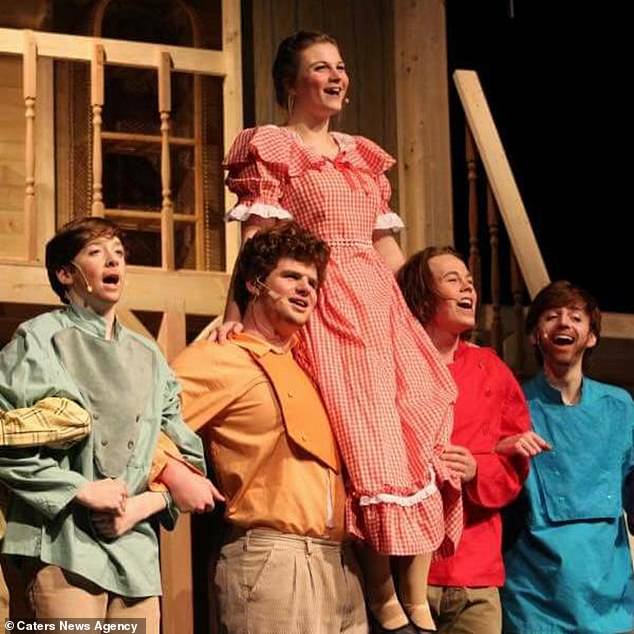 The teenager, who has been performing most of her life (pictured) ‘suddenly became tone deaf’ as though ‘a light had switched off’ 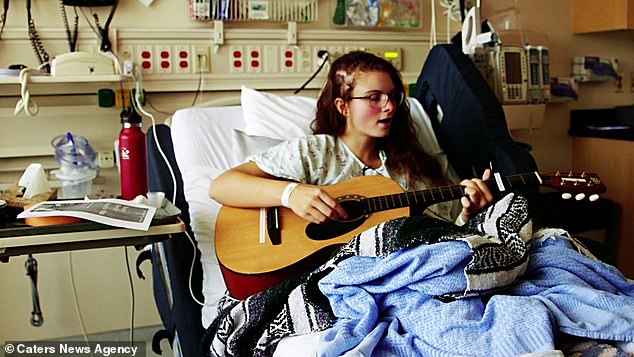 Within 48 hours, Miss Laconetti was singing and playing guitar from her hospital bed

For people with epilepsy, the relationship with music can be complex.

For a small number of people it would seem that certain music can trigger seizures. This is called musicogenic epilepsy.

By contrast, studies have shown that specific musical patterns have the potential to help control seizures. This is called the ‘Mozart effect’.

A musicogenic seizure is epilepsy triggered by certain types of music or even specific frequencies of pitch for which the person’s brain has a low threshold or tolerance.

The trigger may be a particular type of instrument or even a composer. Seizures are even said to have been triggered by church bells, hymns or even the French national anthem.

These sounds trigger abnormal activity on the brain.

In some cases, merely thinking of the atmosphere and the emotions associated with a certain stimulus is enough to induce a seizure, and they may also occur during sleep if the person is dreaming of music.

Statistically musicogenic epilepsy is thought to affect one in 10,000,000 people, although research suggests it may be more common.

It can be difficult to diagnose because music, as a trigger, has endless possibilities.

There may also be a time delay between the stimulus and seizure, meaning people don’t associate the two.

Musicogenic epilepsy is a rare condition, with seizures caused by listening, playing, thinking or even dreaming of music.

It is provoked by different stimulus in each case, with some reporting seizures according to genre of music such as jazz, classical, choral or popular music. For others the trigger may be a particular type of instrument or composer.

Astonishingly, seizures are even said to have been triggered by church bells, hymns or even the French national anthem, according to Epilepsy Society.

Surgeon Dr Jason Hauptman came up with a solution to protect Miss Laconetti’s future prospects as a performer.

‘Because [the lead surgeon] Dr Hauptman knew how important it is to me to continue singing and acting, he wanted to be very careful when removing the tumour,’ said Miss Laconetti.

‘He didn’t want to interfere with my ability to sing.’

According to the hospital, the procedure is often employed to preserve cognitive functions.

However, the hospital has never previously done this surgery to reserve musical talent.

While doctors were removing the tumour, Miss Laconetti remained completely awake and completed various musical tasks, such as singing scales and belting out one of her favourite songs, Weezer’s ‘Island in the Sun’.

Dr Hauptman said: ‘Our focus was not only on taking care of the tumour but making her life better.

‘We wanted to preserve the things she cares about like her passion for pursuing a career in musical theatre.’ 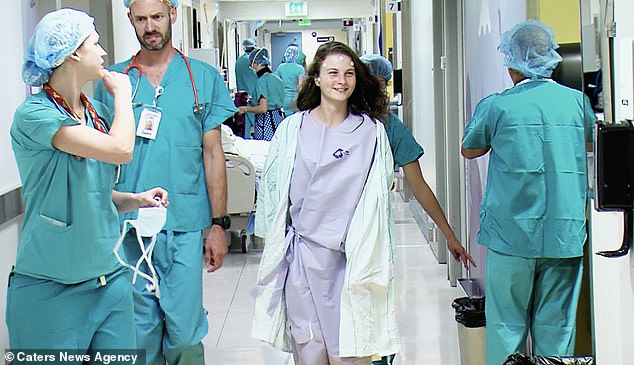 Miss Laconetti, pictured before her surgery, is keen to get back onto the stage 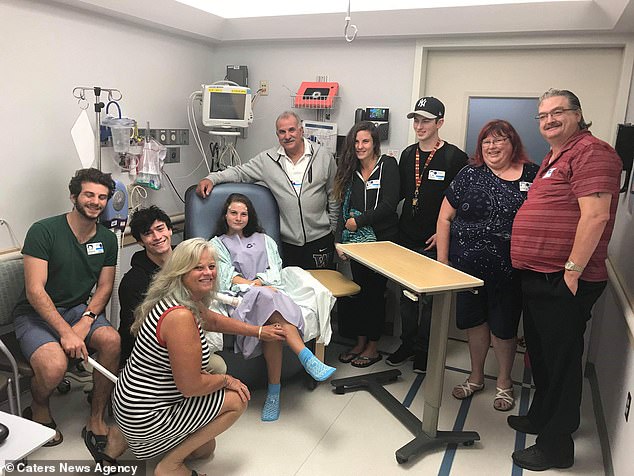 Miss Laconetti surrounded by her family waiting for the operation to cure her condition, musicogenic epilepsy, which effects one in ten million people

Another doctor as the hospital, Hillary Shurtleff, said: ‘We’ve never had a patient sing in the operating room before, and Kira is such a talented musician.

‘Her voice is so beautiful and her willingness to do something new helped make the whole process interactive, collaborative and exciting.’

Just 48 hours after the surgery, Miss Laconetti was singing and playing guitar from her hospital bed, showing remarkable progress.

Since the operation the aspiring stage performer has continued to go from strength-to-strength and has already set her sights on returning to the spotlight.

She said: ‘My biggest fear before the surgery was that the seizures would get in the way of performing.

‘Now, I want to get back on that stage and perform as soon as I can..’