These majestic giraffes are used to being the tallest thing around – but they’re given a run for their money when they look out on a city full of skyscrapers.

Photographer Paras Chandaria managed to capture the graceful animals strolling within what seems like touching distance of the towers in Nairobi.

The herd of giraffe were found in Nairobi National Park, which borders the Kenyan capital city of Nairobi.

Just four miles from the heart of town, lions, hyenas and giraffes roam at will in the vast reserve that is facing multiple pressures from a burgeoning city and the accompanying infrastructure demands.

The image taken by Paras Chandaria, which makes it look like the giraffes are within touching distance of the skyscrapers in Nairobi

It’s rare for animals who live in the bush to come onto the outskirts of the park – but luckily, Paras, 34, was there just at the right moment.

And with the sheer size of the buildings in the background, the animals are made to look like they are strolling just metres away from of them.

He said: ‘Nairobi National Park, is one of the most unique parks in the world and one of its kind.

‘I couldn’t believe I was able to get such an amazing shot.

‘Although it was great to photograph the city, the tower of giraffes is definitely more important to me than the concrete structures behind them.

‘I hope my images raise awareness of the fact the entire existence of this park is threatened by the ongoing encroachment and developments around and in the park.

‘Currently, even thought are stop orders from the High Court, there is a railway being built straight through the middle of the park.

‘This park is very small and therefore it will suffer a lot and may never be the same again.’ 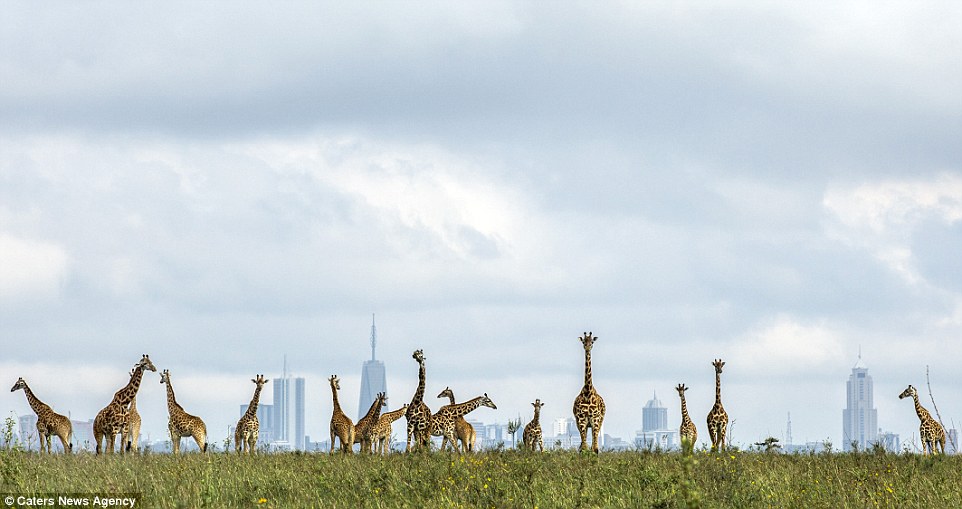 The giraffes roam Nairobi National Park, which is just four miles from the heart of the city, which can be seen in the background

Earlier this month, Kenyan conservationists expressed their outrage after the construction of a railway line began inside Nairobi’s famed national park.

The extension of a Chinese-built railway – Kenya’s biggest infrastructure project since independence – through the vast wildlife reserve on the outskirts of Nairobi has been tied up in legal battles since 2016 and demonstrators claimed the building work breached a court order.

At the beginning of March, cranes, heavy machinery and scores of workers from the China Road and Bridge Corporation were set up inside the park borders, working furiously inside an area cordoned off and protected by armed rangers.

Jim Karani, legal affairs manager of Wildlife Direct, which has been involved in the litigation, said: ‘What we have seen here is a government that is hell-bent on getting its way and building this project even in defiance of court.’

One demonstrator, Catherine Chumo, said: ‘It is very disappointing. The government is openly breaking the law.

A first 483-kilometre (300-mile) railway line from Mombasa to a terminal east of the Nairobi National Park was completed in 2017.

The second phase through the park is being portrayed as vital to Kenya’s ambitions to eventually link to its regional neighbours.

Under the scheme, an elevated rail line will run across six kilometres of the park perched on pillars between eight and 40 metres (24 to 120 feet) tall.

Rail authorities maintain the pillars will be camouflaged, noise pollution reduced and freedom of movement maintained for the animals.

A coalition of interested parties first appealed to the National Environment Tribunal in 2016 to complain about the way in which an impact study was carried out, citing lack of public participation.

The tribunal ordered construction be stopped until the case could be heard, which it was required by law to do.

However in 2017, government tried to amend the law imposing an automatic halt to a project when a complaint is lodged at the environmental tribunal — burying the change in an unrelated prevention of torture act.

When conservationists learned of this they complained to the high court which suspended the amendment.

Spokesman Paul Gathitu said that the Chinese construction company had appealed to the high court, arguing this automatically invalidated the stop order while that case was ongoing.

Kenya’s government has come under fire for recently ignoring a string of court orders.

Transport Minister James Macharia said he did not wish to comment.