They may have been built hundreds of years ago – but castles continue to capture the imagination today.

And these incredible images show why.

They appear in a fascinating new book called Castles of the World by Phyllis Jestice, which examines more than 150 fortifications from across the world, from 5th century fortresses and fairy-tale Alpine wonders to Norman keeps and Samurai strongholds.

Delve into this tome and you’ll find images of the ancient Arg-E Bam fortress in Iran, Trakai Castle, built on a small island in the middle of stunning Lake Galve in Lithuania and a jaw-dropping aerial shot of the longest-occupied palace in Europe – Queen Elizabeth’s Windsor Castle.

Jestice says: ‘This book is a beautiful examination of past worlds viewed through castles that continue to enrich the modern landscape. They evoke an imagined age of aristocratic warriors and noble aspirations for which many people still yearn today.’

Arg-E Bam in Iran is the largest building in the world made from adobe. The citadel covers a 44-acre site surrounded by a massive wall over a mile long. The Achaemenid Persians in the fifth century BCE built the earliest fortress on the site due to its key location on the Silk Road and assured its prosperity for millennia. Arg-E Bam was almost completely destroyed by an earthquake in 2003. The photograph shows the site before the earthquake 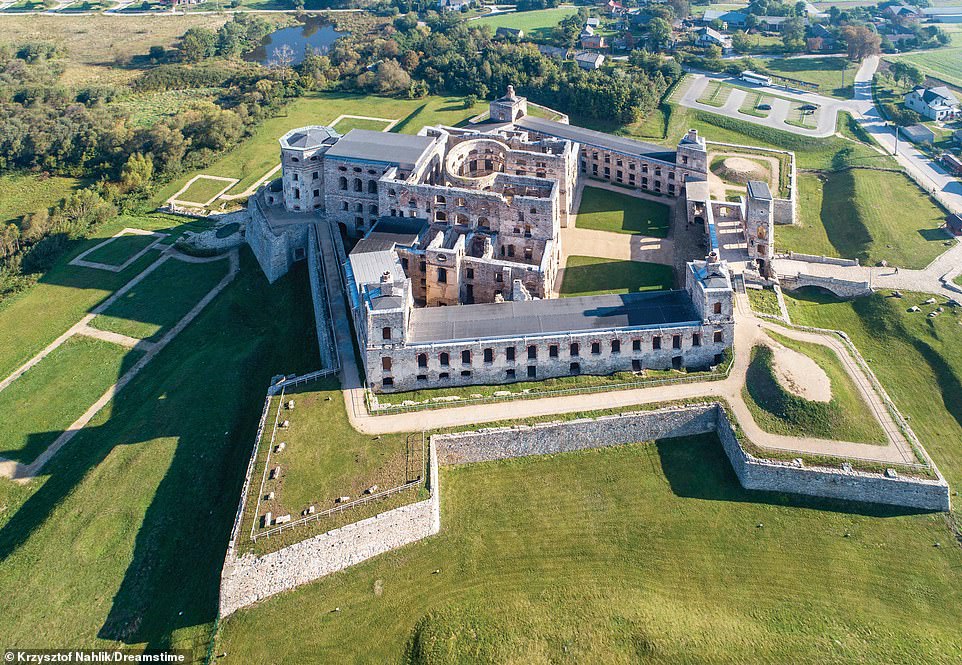 Krzyztopór Castle in Poland, pictured, had a very short history as a viable fortress. It was probably completed in 1644. Swedish forces, however, occupied the castle in the invasion of 1655–1657, causing so much damage that the decision was made not to rebuild it. Destruction was completed by Russian troops in 1770. For about a century after the castle was damaged by the Swedes, several Polish noble families continued to live in the best-preserved part of the castle. Today, about 90 per cent of the castle’s external walls still stand, but the buildings within Krzyztopór are in a ruinous state 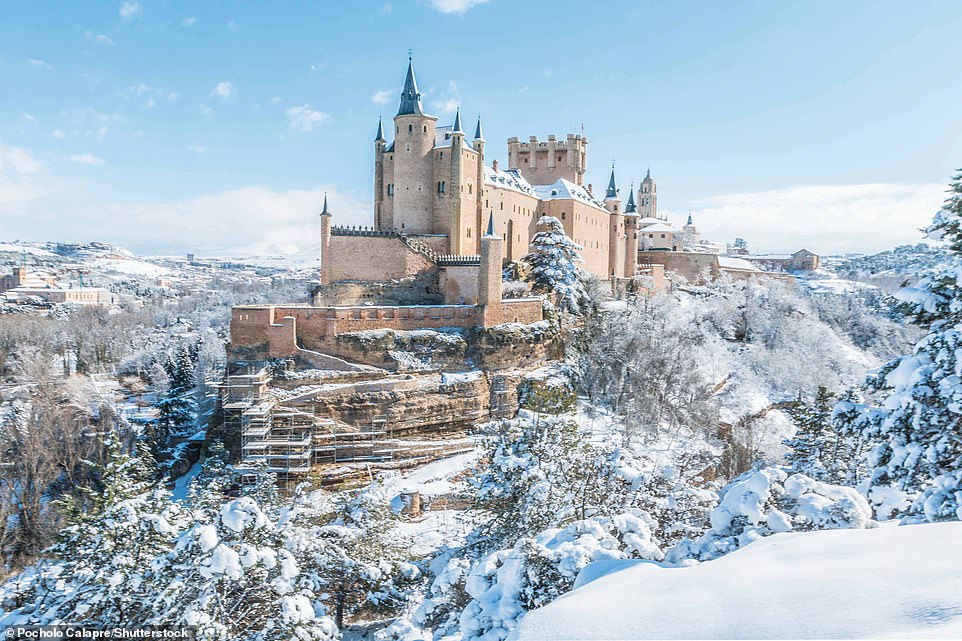 This Segovia structure owes its shape to the Christian rulers of Castile in Spain. Alfonso VIII of Castile began converting the Almoravid fort to stone around 1200 and John II (1406–54) added its most distinctive feature, the ‘new tower’, while Philip II decorated the castle with tall spires in the 16th century 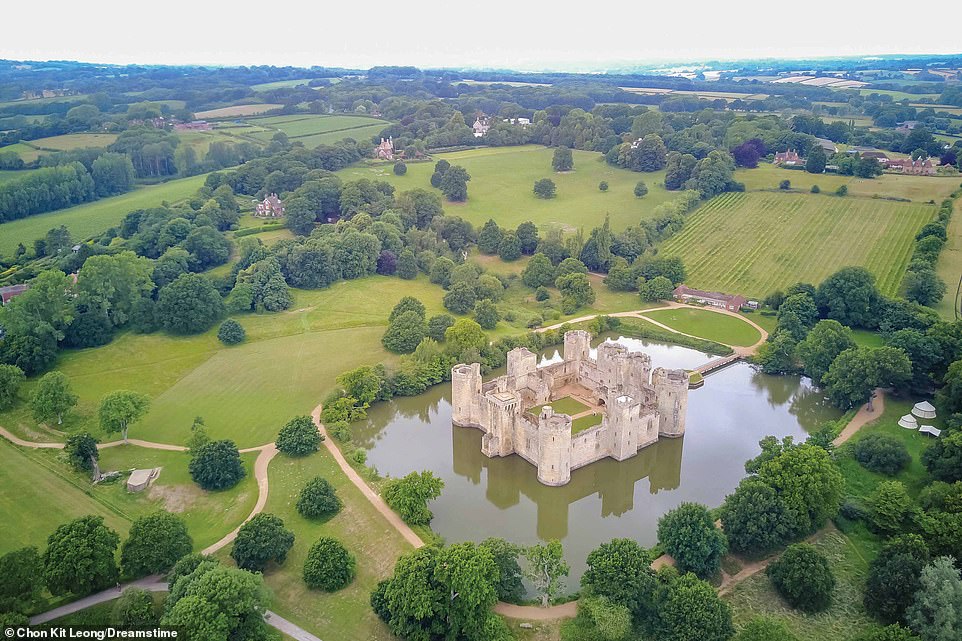 Sir Edward Dalyngrigge made his fortune fighting on the continent in a mercenary company. After returning to England, in 1385, he received a royal licence to build a castle. Dalyngrigge’s East Sussex home of Bodiam Castle was built out of fear of French raids, but the old-fashioned walls suggest a greater interest in showing off than defence 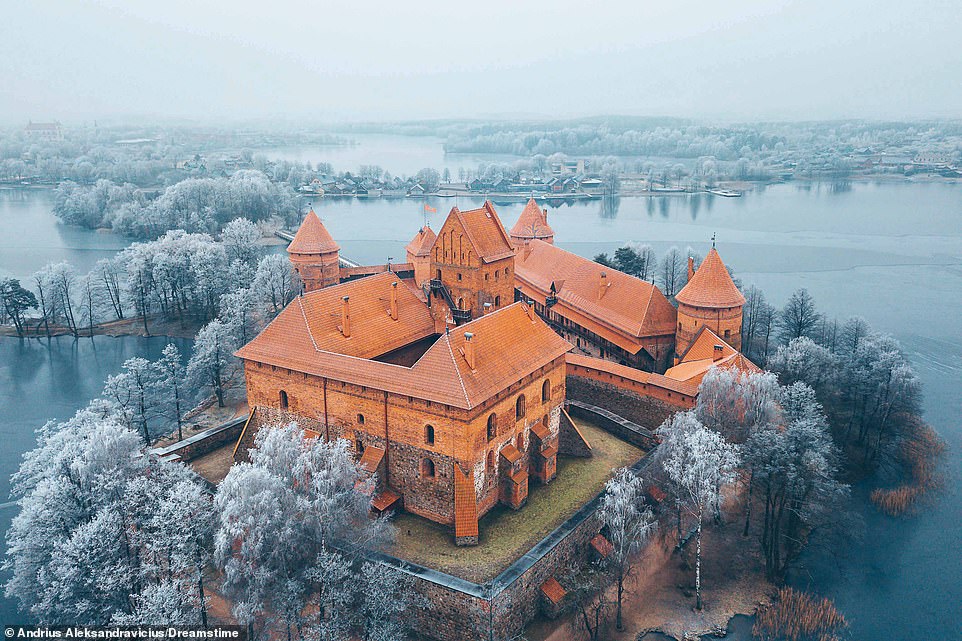 Grand Duke Kestutis began constructing Trakai Castle on an island in Lake Galve in Lithuania in the 14th century as a major administrative centre. The castle was badly damaged in an attack by the Teutonic Knights in 1377, but during a truce the grand duke brought in the Order’s own stonemason to rebuild the fortress. Sometimes called ‘Little Marienburg’, the castle is constructed of red brick in the style of Teutonic Order fortifications. A wooden footbridge now connects the castle to the mainland, but during its time as a Lithuanian royal centre the fortress would only have been accessible by boat 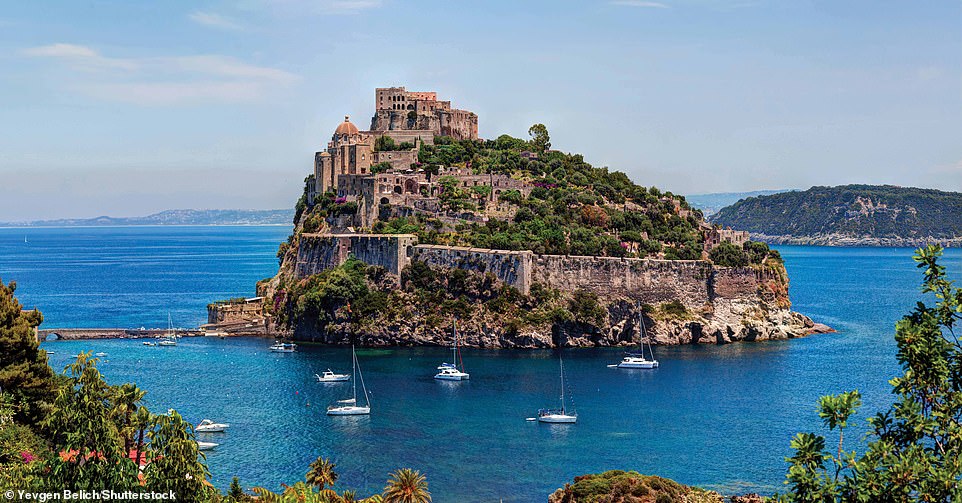 First fortified in 474 BCE, Castello Aragonese defended the Bay of Naples off the coast of Italy. The present castle and name come from the rebuilding of the castle by Alfonso V of Aragon in 1441. Castello Aragonese was badly damaged by British bombardment in 1809, but restored in the 20th century 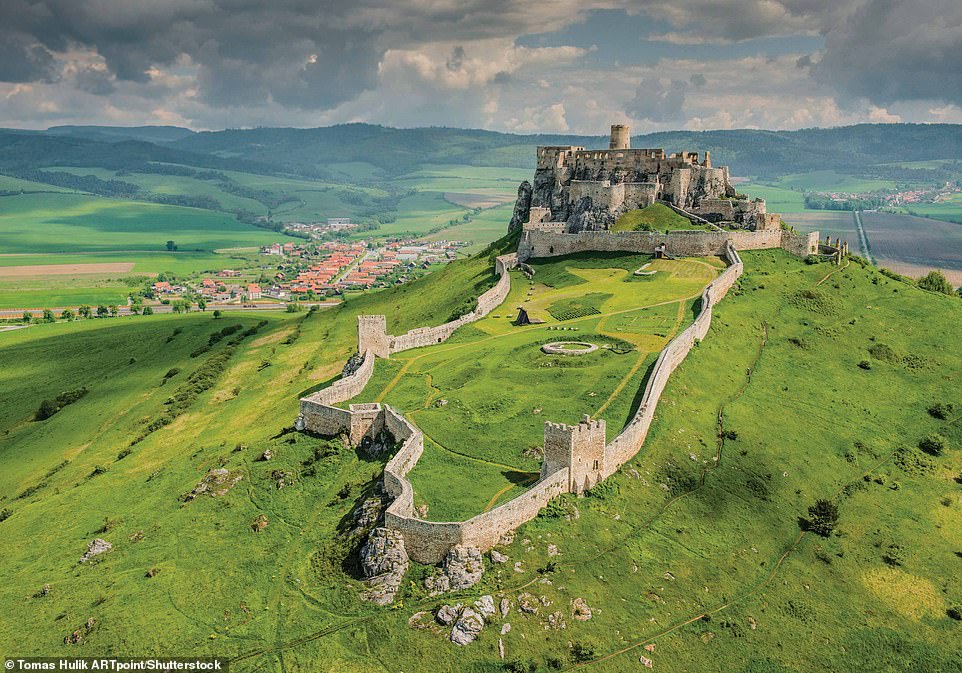 One of Europe’s largest castles in area, Spiš Castle in Slovakia was first built in the 12th century. A settlement formed in its shadow, which was then incorporated into the castle with an encircling wall. As further settlements were established, more expansive walls were built in the 14th and 15th centuries. Abandoned in the early 18th century, the castle has only been partially restored 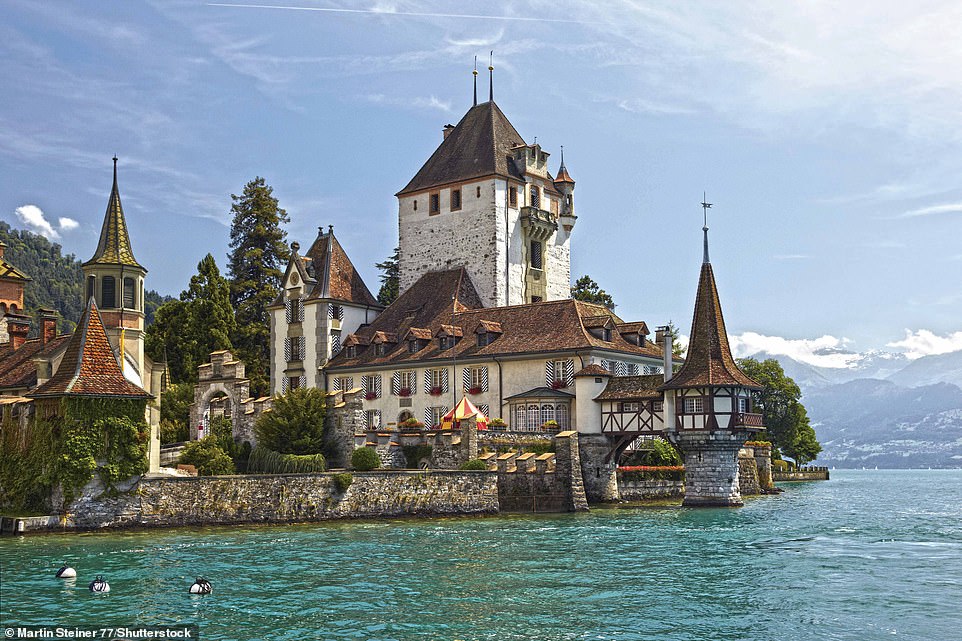 After occupying a fort in the hills above Oberhofen, the von Eschenbach family moved to the shore of Lake Thun in Switzerland and began constructing the current Oberhifen Castle in around 1200, beginning with a keep. The gatehouse still attests to the castle’s originally strong fortification, which included a moat on the landward side. In 1306, the Habsburgs forced the von Eschenbach family to sell Oberhofen Castle to them. But after the Swiss Federation decisively defeated the Habsburgs at the Battle of Sempach (1386), the canton of Bern took control of the castle, before selling it to one of the leading families of the city 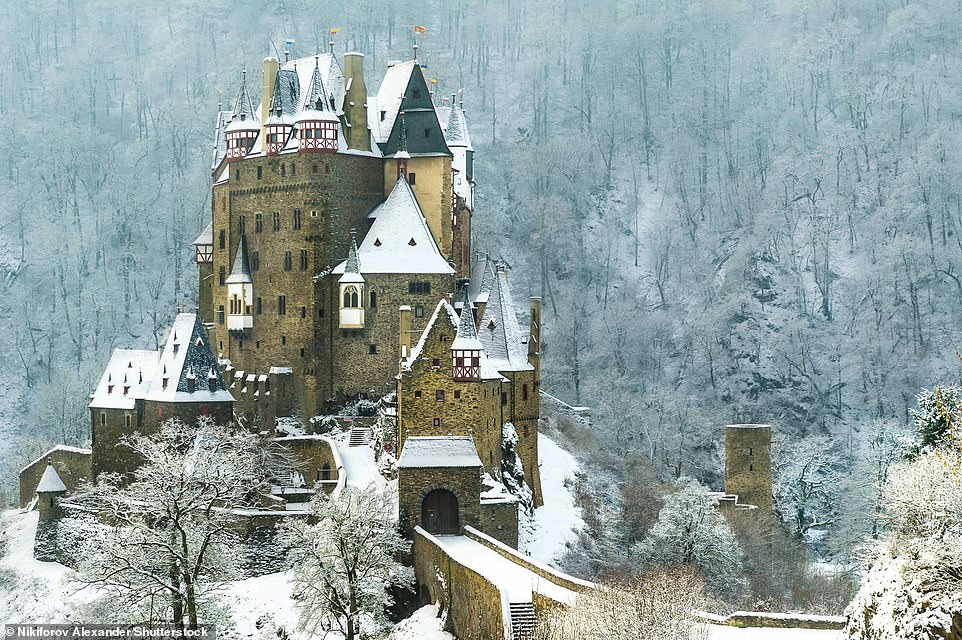 Perched above the Moselle River between Koblenz and Trier in Germany, Eltz Castle has been owned by the Eltz family since the 12th century. The keep dates back to the 12th century, but Eltz above all owes its security to the Elzbach River, which surrounds it on three sides, and its position on a rock spur. Eltz was more impressive before it endured a two-year siege in the 1330s. After capitulating, the outer defences were demolished, leaving the castle as a simpler fortified residence. Branches of the family owned the castle in common, occupying more than one hundred residential rooms The castle in Soroca, Moldova, was built by order of Prince Stephen the Great of Moldavia, with the first stones laid in 1499. It is one of a string of fortifications constructed along the Dnieper River to protect the Moldavian/Ukrainian frontier. In the late 17th century, Jan Sobieski’s Polish-Lithuanian forces successfully defended Soroca from an Ottoman attack. Historians speculate that Prince Stephen of Moldavia brought in western European architects to design his castle. It was engineered in the late medieval western fashion, with curved walls and round outer towers, better able to resist cannon fire than older fortification styles. The castle was still of military importance during the campaigns of Peter the Great in the early 18th century

One of Spain’s oldest castles, Loarre in Huesca was erected in stages between around 1020 and the early 12th century to support the early steps of the Christian reconquest of the Iberian Peninsula. Constructed on a rocky outcrop that prevented a single unified plan, it consists of a number of buildings surrounded by curtain walls 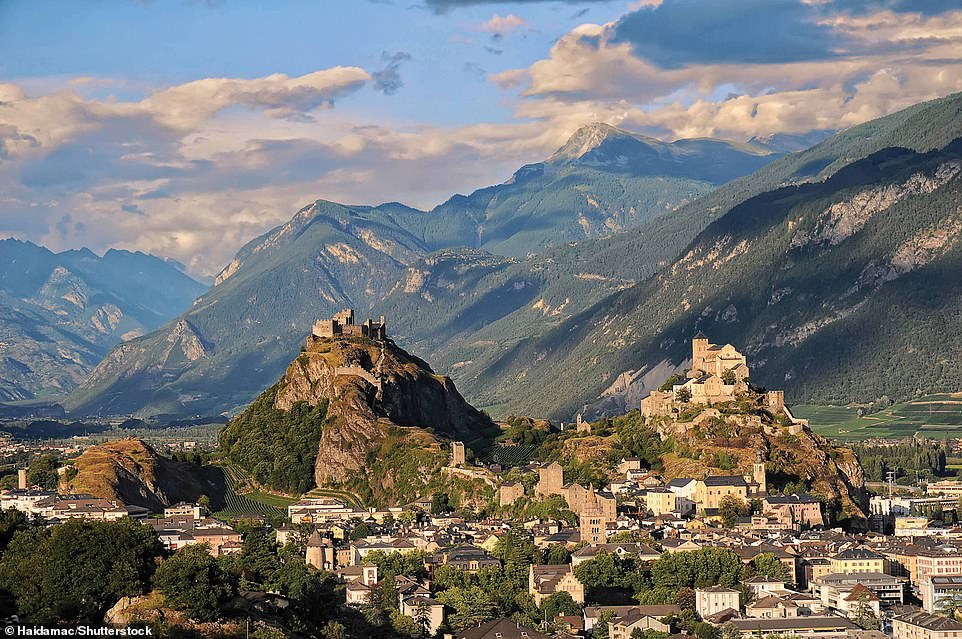 Tourbillon Castle dominates the town of Sionin in Switzerland from one of the twin rocky outcrops (on the left) that stand on the flank of the Alps. It can only be reached by a long, winding stairway. The other hill, to the right, is home to the Basilique de Valère, a Catholic basilica constructed in the 11th to 13th centuries 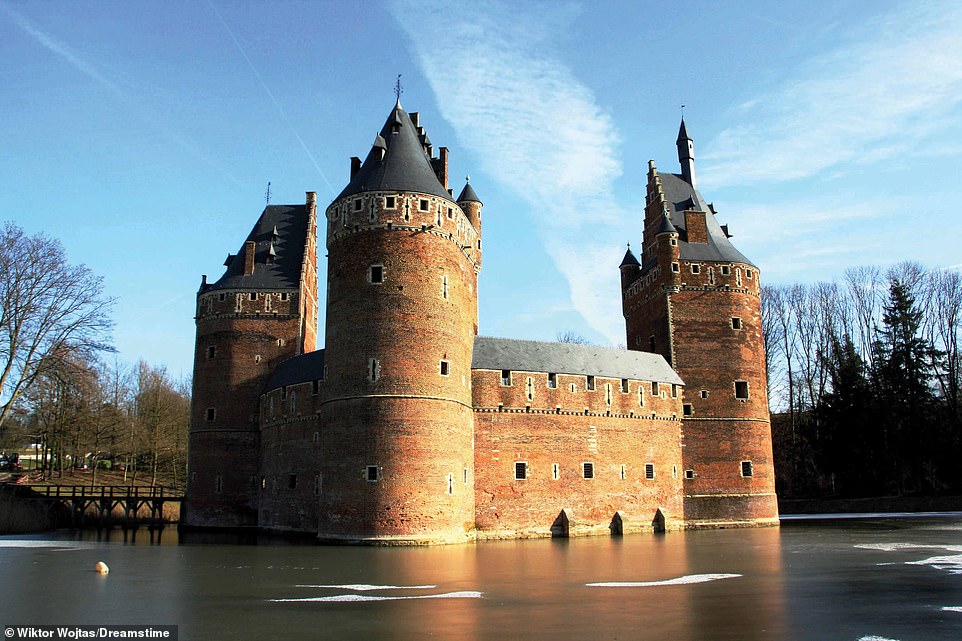 Erected between 1300 and 1310 to protect Brussels, Beersel Castle’s wide moat compensates for its lack of elevation. Beersel suffered sieges in the 14th and 15th centuries, but each time the damage was soon repaired. The castle housed a cotton factory for nearly a century before its restoration as a tourist site 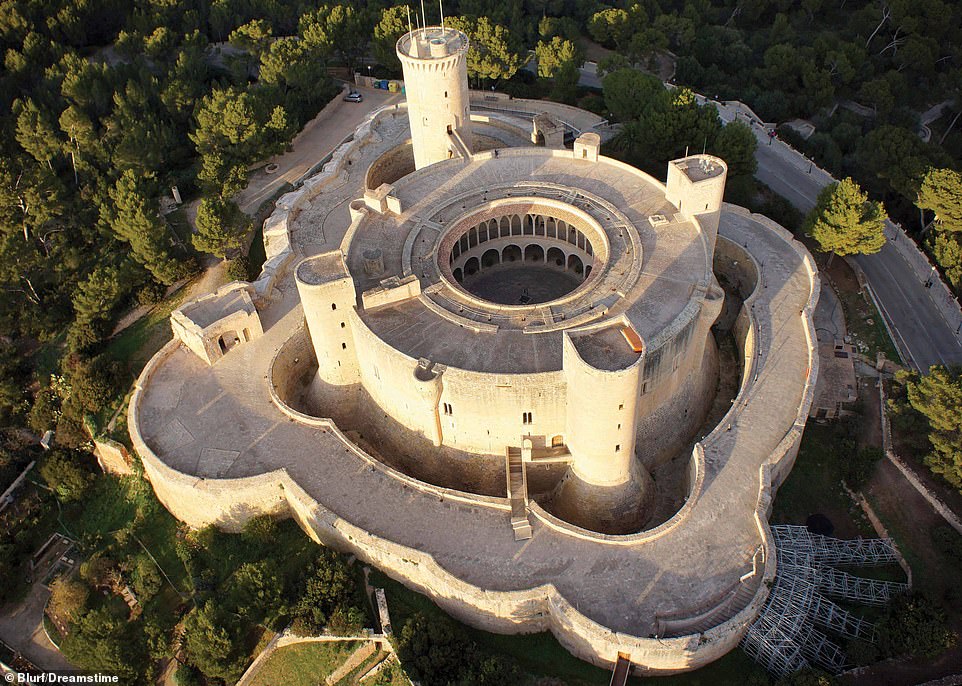 James II of Aragón and Majorca constructed Castillo de Bellver on the Mediterranean island of Majorca in the 14th century. It is one of the few circular castles in Europe. The castle is well preserved, thanks to the fact that it was used as a prison from the 18th century until the middle of the 20th century 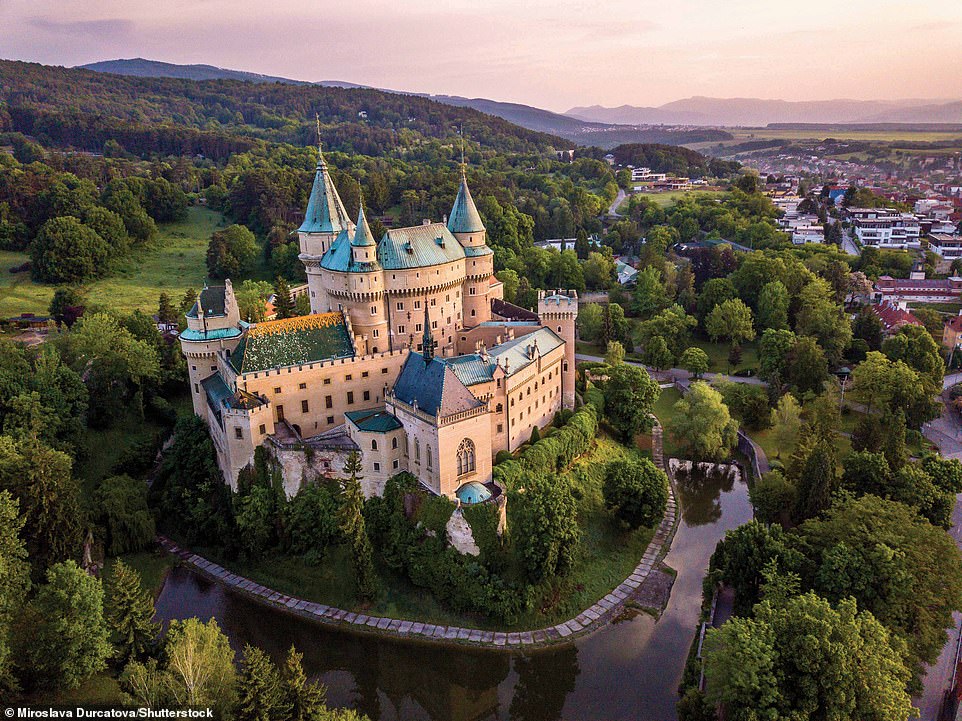 Although first mentioned in a document of 1013, Bojnice Castle in Slovakia bears little resemblance to the small wooden fortress of the 11th century. The castle was gradually rebuilt in stone, and in the 16th century was transformed into a Renaissance castle. Bojnice is now a 19th-century romantic fairy-tale castle, thanks to the rebuilding masterminded by owner, Count János Ferenc Pálffy between 1888 and 1910. Deeply impressed by the French châteaux of the Loire Valley, Pálffy invested a fortune in recreating this French style in Slovakia 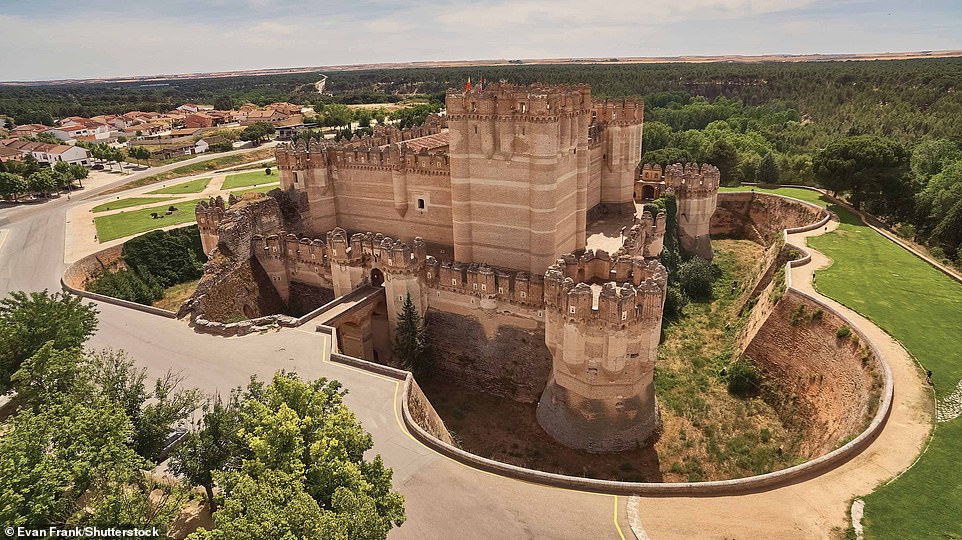 The archbishop of Seville began construction of the well-preserved Coca Castle in 1448 and work continued until the end of the 15th century. Coca is constructed of brick because of a lack of good building stone in the region. The castle never suffered a serious attack and its impressive defences may have been largely for show. This is the best example of Mudéjar castle-building on the Iberian Peninsula. The Christian architect incorporated many elements of Islamic art, fusing the style into an overall late Gothic design. Primarily used as a residence, Coca Castle now houses a school 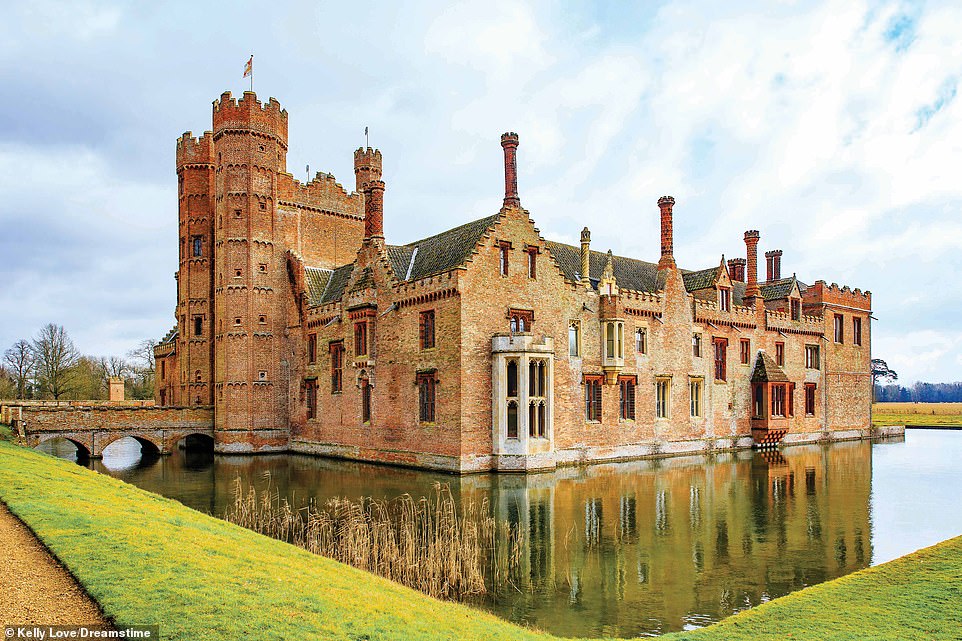 Sir Edmund Bedingfeld began construction of Oxburgh Hall in Norfolk around 1482. It is still owned by his descendants, although now administered by the National Trust. Oxburgh is a moated country house. It looks imposing but would not have been able to hold out against determined assault 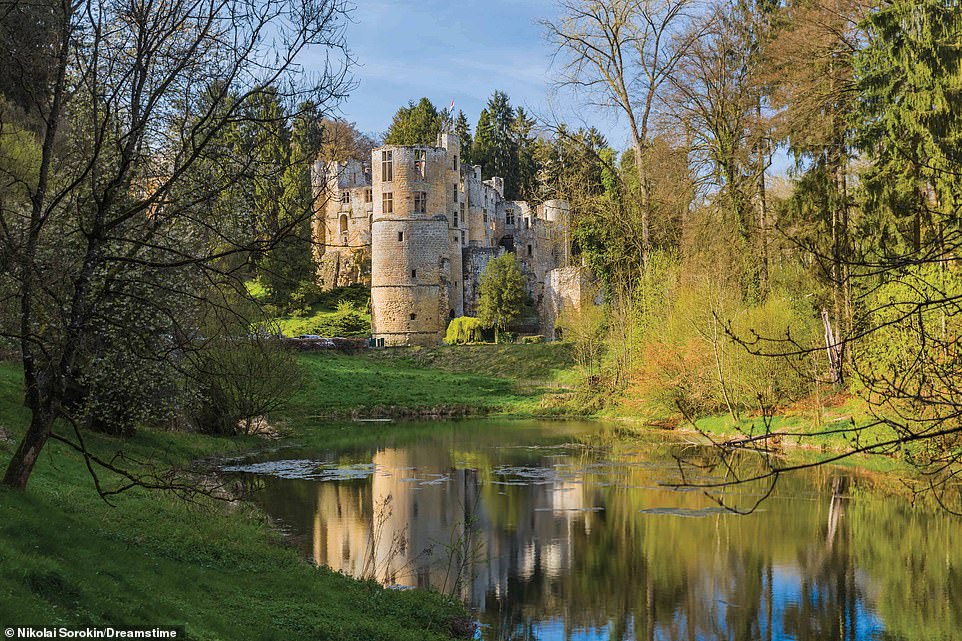 Beaufort Castle in Luxembourg had its start in the early 11th century as a small square stone building protected by a moat. A keep was added in the first half of the 12th century, with further additions in the 1340s. In the 16th century the owner stayed in touch with the times by adding a Renaissance wing. Beaufort fell derelict and was abandoned at the time of the French Revolution (1789–99). For a time the site was even used as a quarry. Fortunately, in 1893 the castle’s owner decided on a programme of renovation, opening the castle to the public in 1928 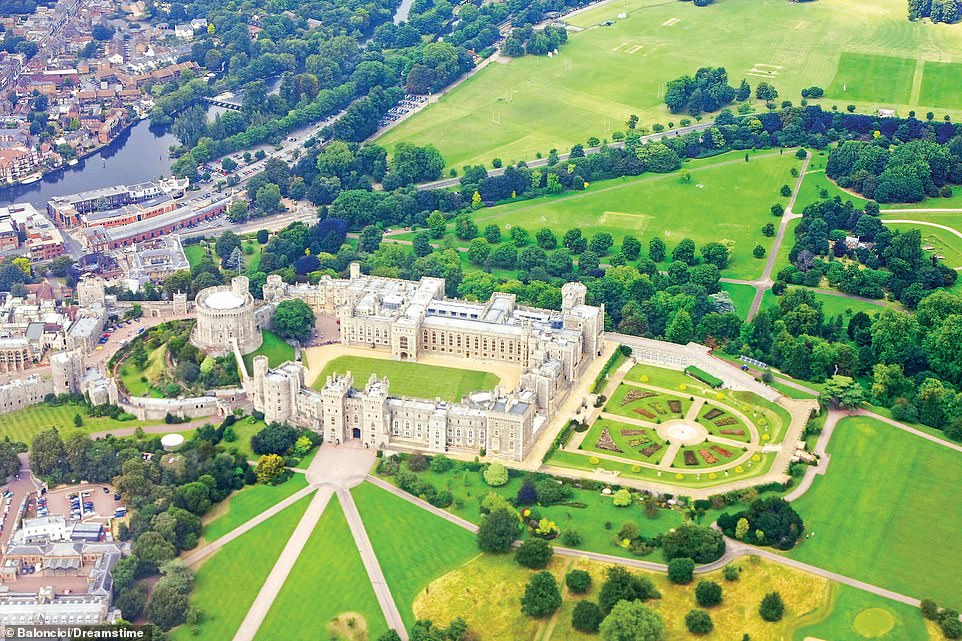 Now the longest-occupied palace in Europe, the first castle at Windsor was constructed in the 11th century after the Norman invasion of England. Built to defend the new Norman dominance on the Thames upstream from London, the castle was expanded and renovated numerous times over the centuries. With the restoration of the monarchy in 1660, Charles II rebuilt much of the castle with Baroque state apartments that survive today. The Round Tower is based on an original 12th-century building, but was extensively remodelled in the 19th century. Still a royal residence for the Queen, today parts of Windsor are open to the public. The Queen holds state banquets there and the wedding of Prince Harry to Meghan Markle took place in St George’s Chapel at Windsor in 2018 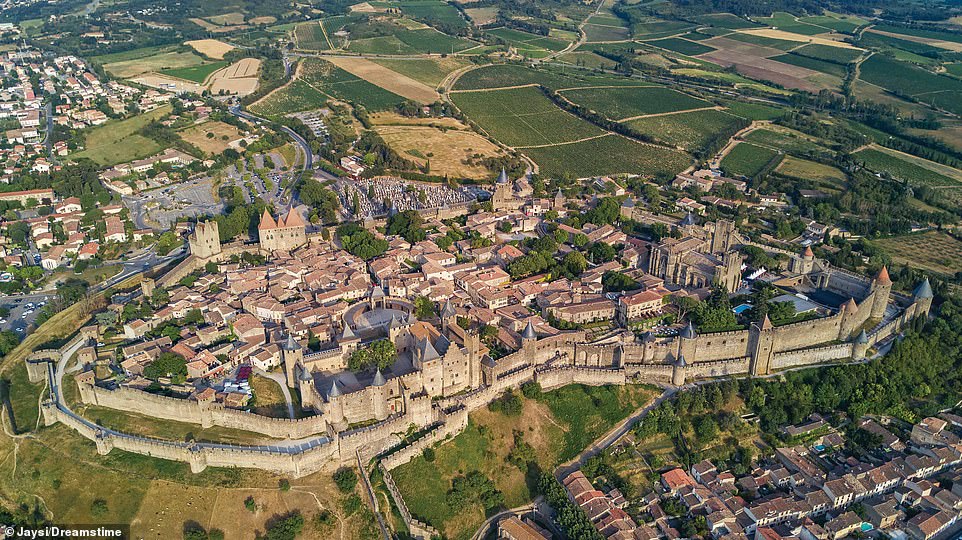 The citadel within the town of Carcassonne in France has the largest intact wall of any town in Europe. It is protected by a double wall, the inner circuit dating to the Visigoths in the seventh century, the outer added after 1226, when Carcassonne passed to the French crown. By the 19th century, the walls of Carcassonne were so derelict that the government ordered their demolition. Following public outcry, however, it was decided to restore the fortifications. The task was given to the architect and antiquarian Eugène Viollet-le-Duc in 1853. His creative reconstruction, however, was strongly criticised by some as being unsuitable for the climate and not in keeping with the architecture of the region 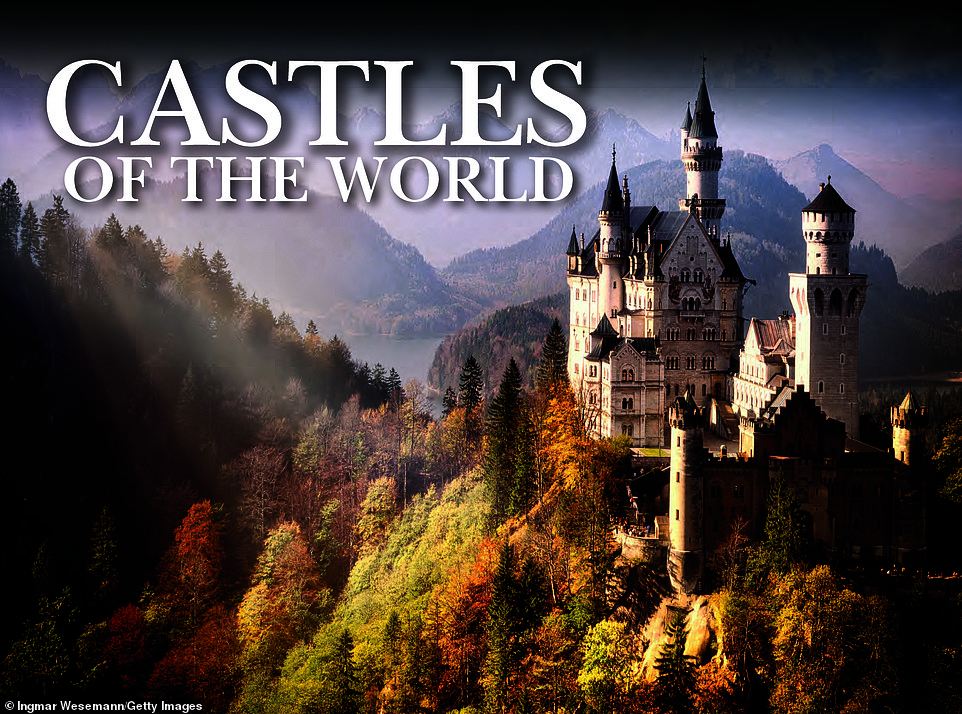 All images are taken from the book Castles of the World by Phyllis G Jestice, published by Amber Books Ltd and available from bookshops and online booksellers (RRP £19.99). Pictured is Neuschwanstein Castle, Bavaria, Germany