The 2019 Australian Geographic Nature Photographer of the Year awards has once again revealed the stunning power of nature.

This year, the overall winner is Mat Beetson, from Western Australia, who took the top prize for his image of sharks circling a beached whale.

Taken at Cheynes Beach, Albany, with the use of a drone, it shows the ill-fated animal just five meters from the shore while great whites feast over its remains.

The picture was one of 2,219 entered in the annual contest – the award for which is by the South Australian Museum.

Winning entry: Here, a large fin whale is seen beached on Cheyne’s Beach in Australia’s Albany, where great white sharks feasted over the remains before its removal. The image was captured by Mat Beetson using a drone.

‘It was unreal, arriving at a peaceful coastal town with a pristine beach and then seeing this huge whale not even five metres from shore — we then noticed the thrashing close by and realised that a few sharks had also stopped by,’ Mr Beetson told ABC.

‘Despite seeing millions of nature photographs over the decades, we have never seen anything that remotely resembles this image,’ they said.

‘Unique and exciting, it reveals incredible beauty in death.’ 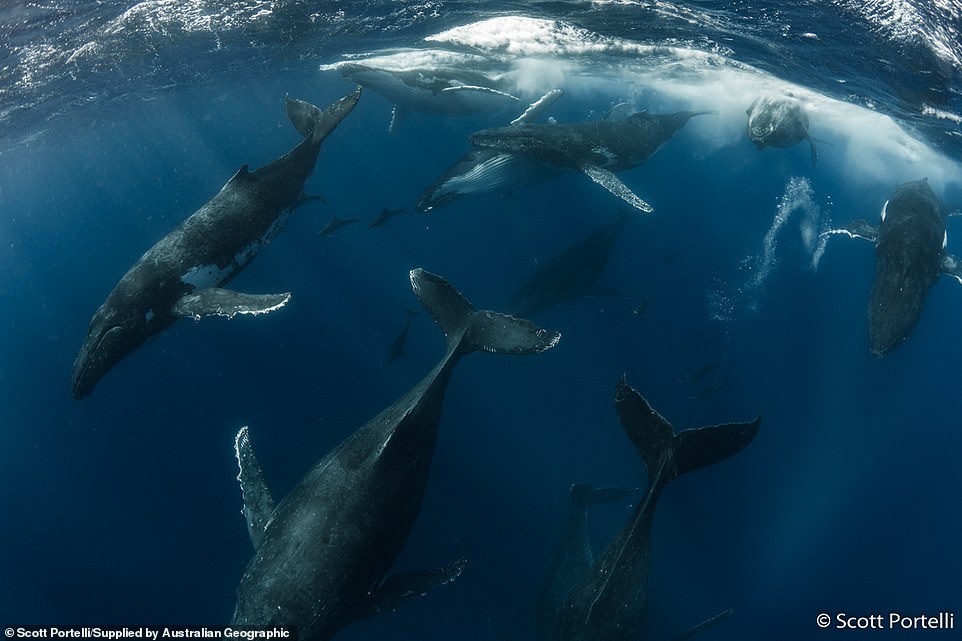 Scott Portelli captured this image of humpback whales and dolphins in Tonga, South Pacific. What’s pictured here is ‘the heat run’, which is perhaps the ultimate wildlife encounter – multiple whales competing for a female 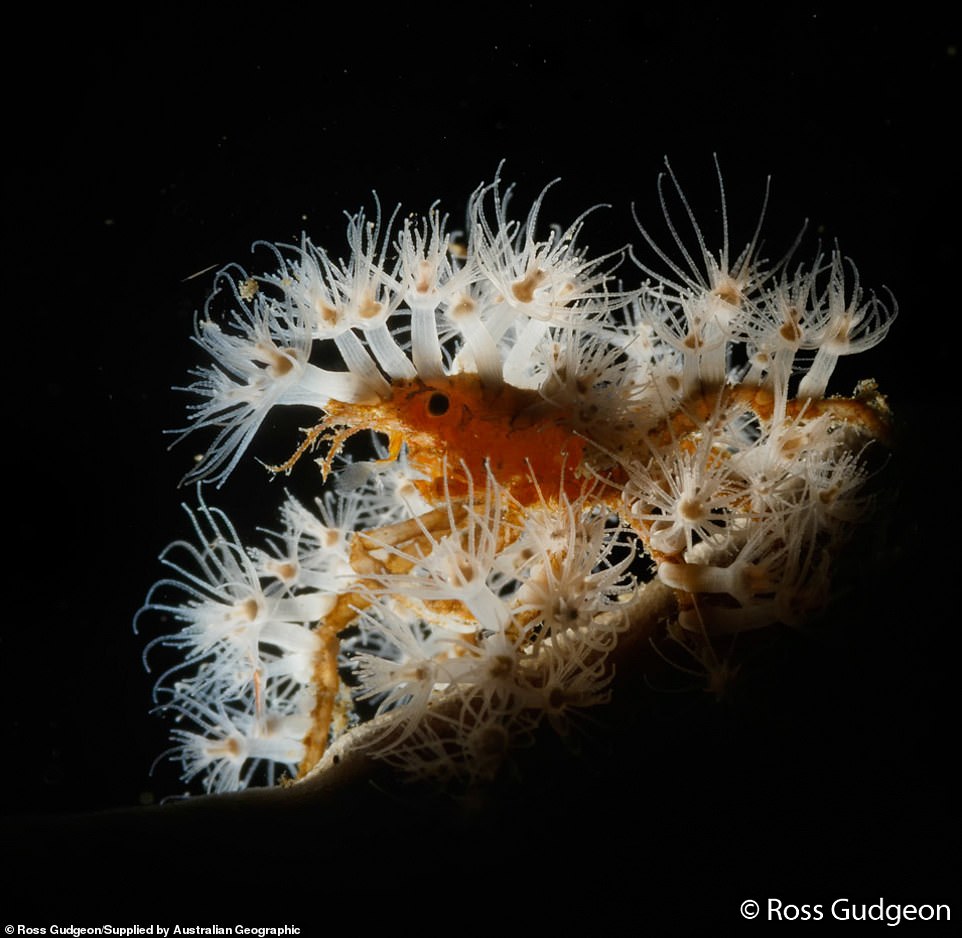 Spiked: Typically, decorator crabs attach pieces of sponge and seaweed to themselves to camouflage and hide from predators (which makes them very poor photographic subjects). However, Achaeus spinosus attaches stinging hydroids to itself to ward off potential predators 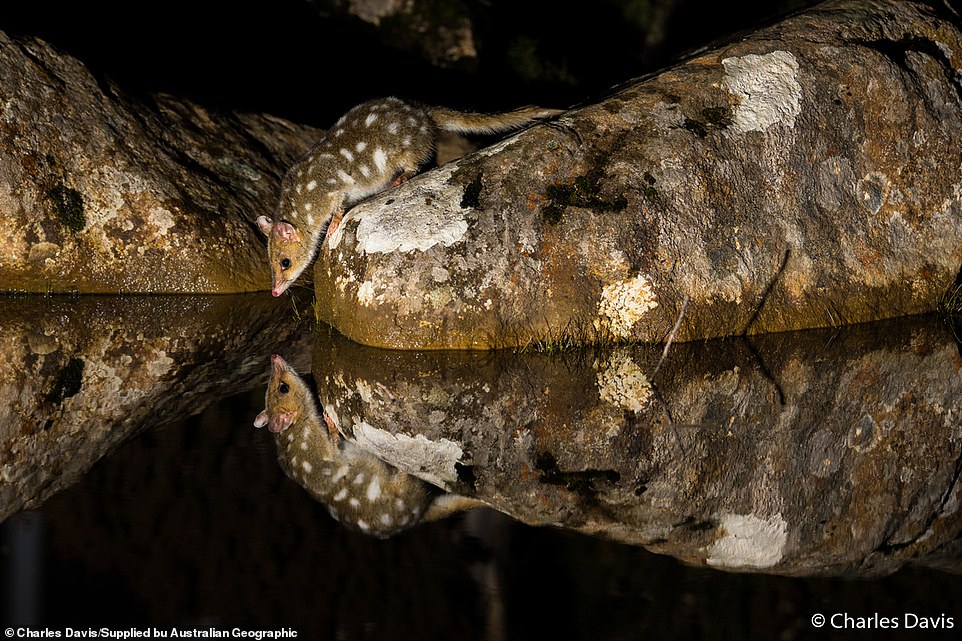 Action shot: Charles Davis captured the sight of this eastern quoll at Mt Field National Park, Tasmania, where it could be seen drinking from a local pool of rain water – which perfectly reflected its image in the flashlight 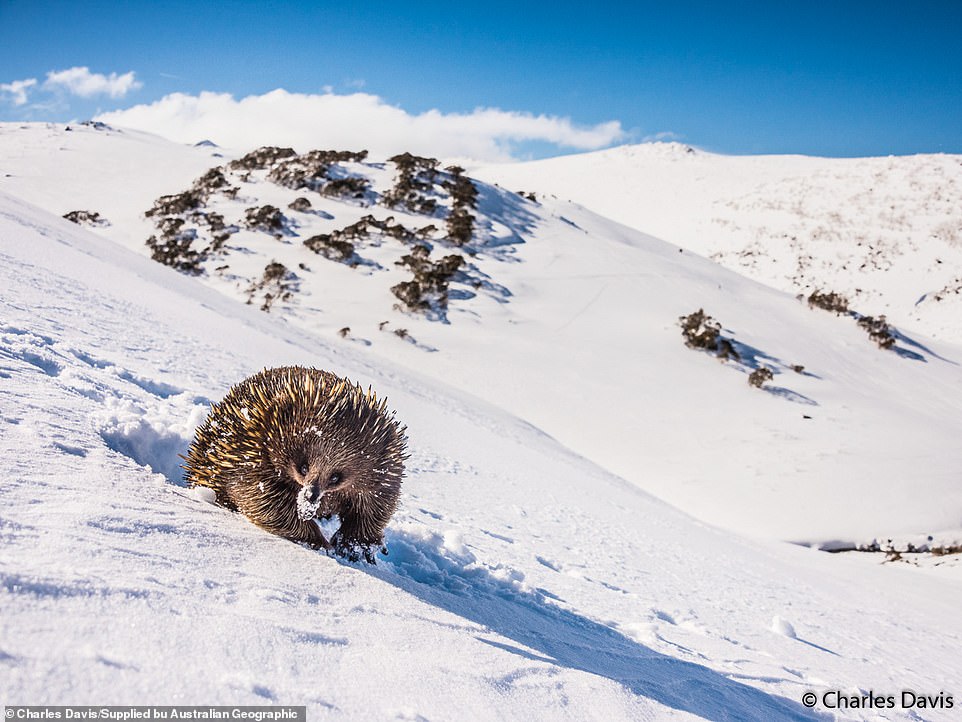 Short-beaked echidna: Once again, this image was taken by Charles Davis – this time at the Australian Main Range, New South Wales. ‘I followed this echidna for two days, its little tracks in the fresh snow leading me for kilometres to every dead tree and tuft of grass on the snow-covered range,’ he said. ‘When I finally tracked it down it was over 2000 metres above sea level and not bothered in the slightest about being surrounded by snow and ice.’

There, they are engaged in ‘the heat run’, which is perhaps the ultimate wildlife encounter – multiple whales competing for a female.

‘Even after 16 years documenting humpback behaviour in the region, it is still truly heart-thumping and adrenaline-pumping action.’ 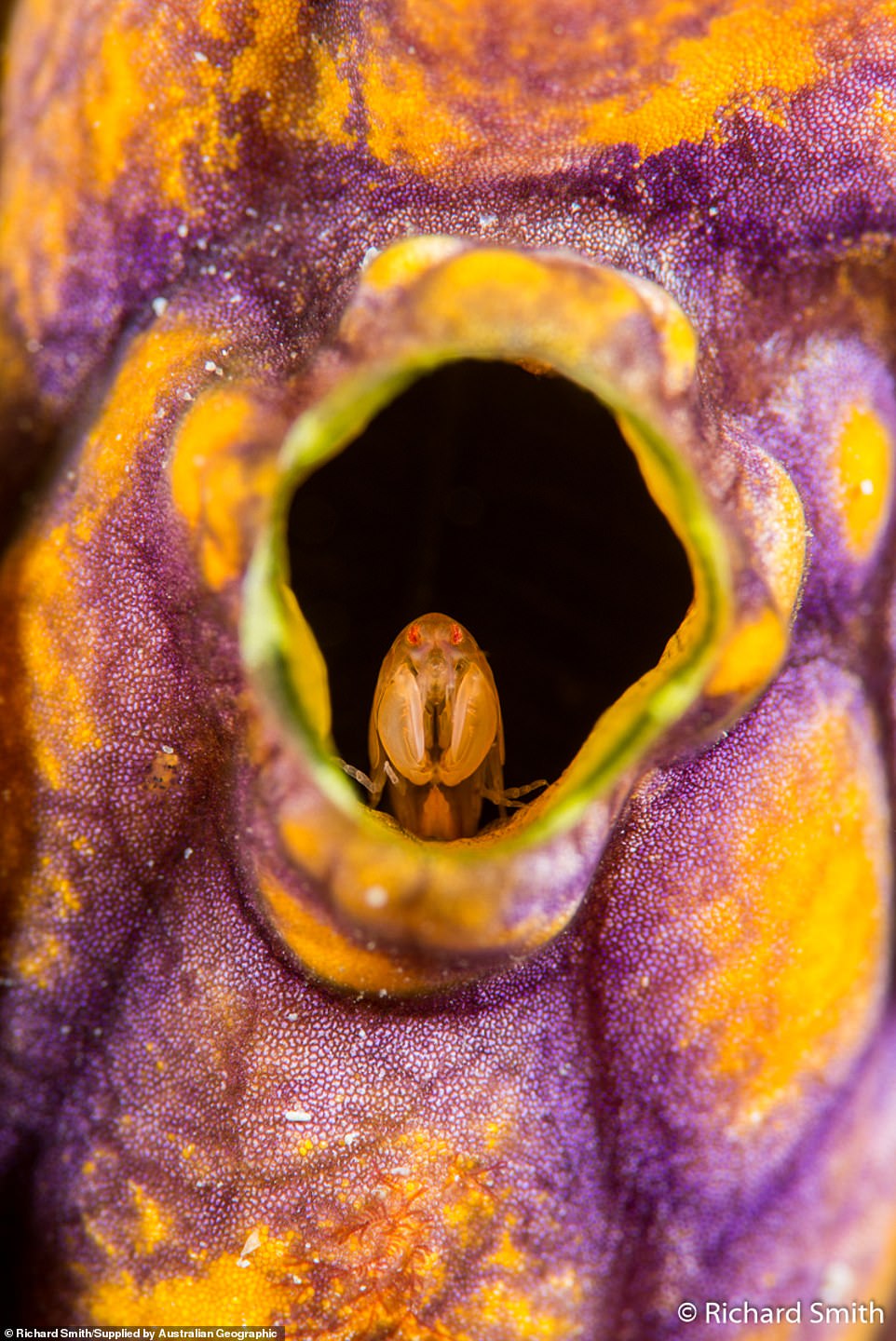 Discovery: Richard Smith, from the United Kingdom, found this tiny amphipod crustacean – thought to be a new species – while searching for miniature pygmy seahorses on the reefs of West Papua, Indonesia 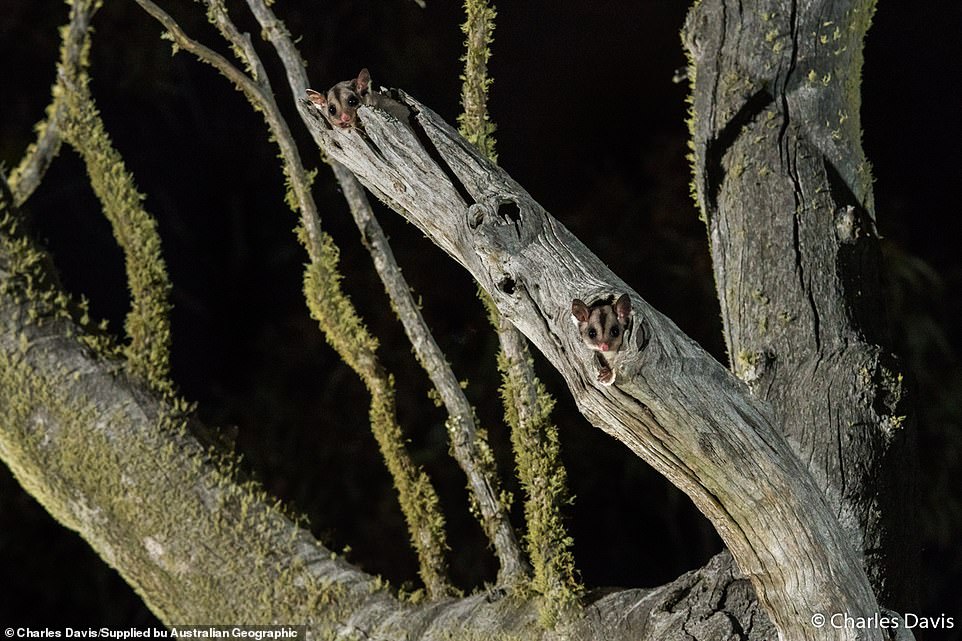 Charles Davis, of New South Wales, spotted this Sugar glider (Petaurus breviceps) in a gum tree in Cooma. Each night they would emerge at 8.28pm, poking their little heads out for five minutes to make sure it was safe before leaving to feed. 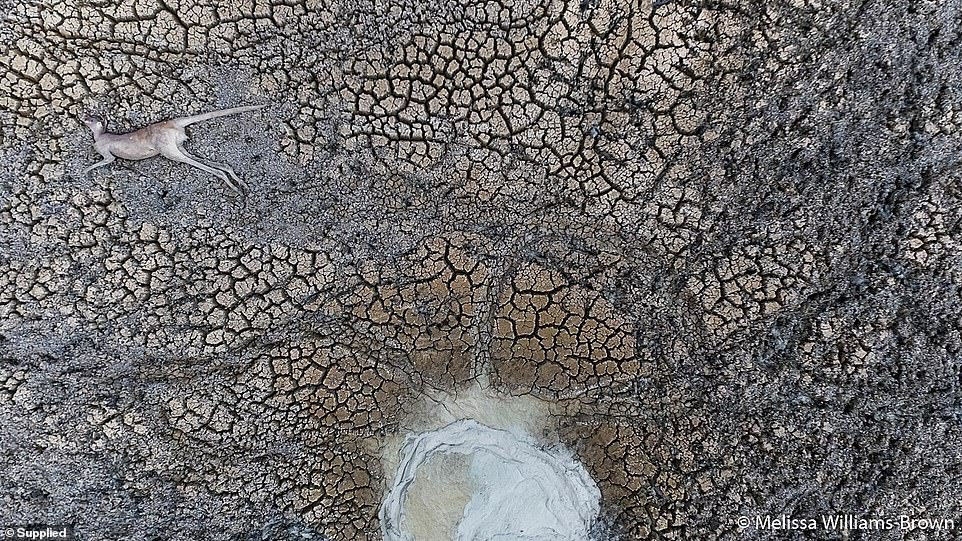 The Menindee Lakes were deliberately drained in 2016–17 and New South Wales has experienced a lengthy drought, which has left many animals and birds without water. Lake Cawndilla is now just a drying lakebed scattered with the remains of native animals. Image by Melissa Williams-Brown. 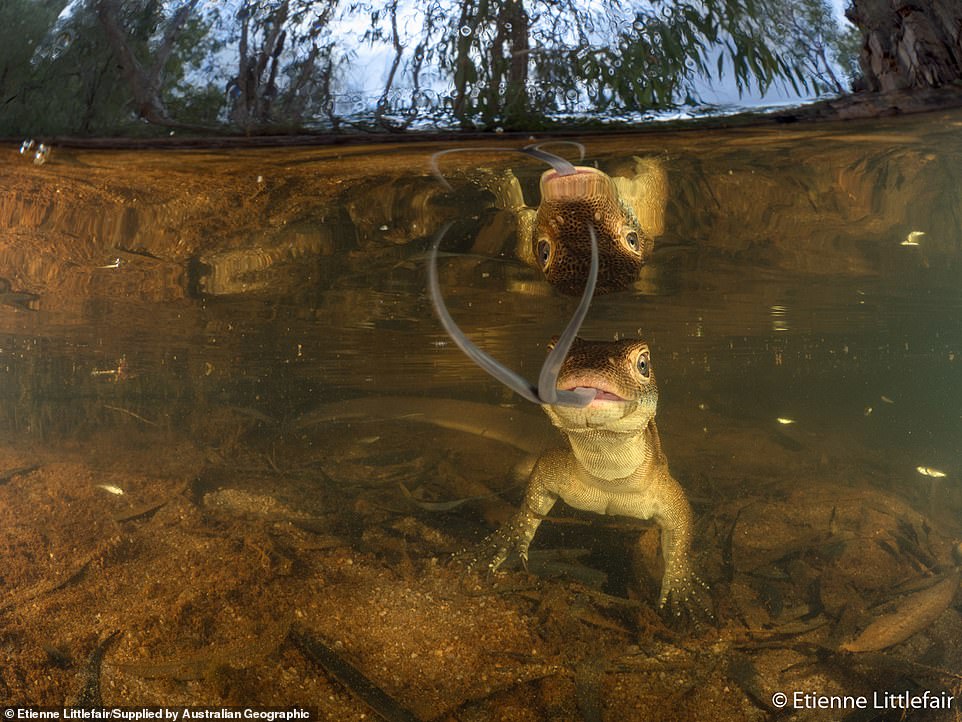 Another impressive entry was from the UK’s Richard Smith, who spotted a commensal amphipod living in solitary ascidian in West Papua, Indonesia.

‘I was searching for miniature pygmy seahorses on the reefs of West Papua when I happened across this tiny amphipod crustacean,’ he said.

‘Just 0.5–1cm long, this male is sitting at the mouth of the sea squirt to guard the females and young within. According to an amphipod expert, this is likely a new species.’

‘This night was the most amazing display of lightning that I have ever seen, with constant flashes of lightning lasting hours,’ he says. ‘For the composition, I decided to focus on a man standing at the edge of the water with an umbrella to add a sense of scale to the image.’

For more information, and to see all of the shortlisted entries, click here. 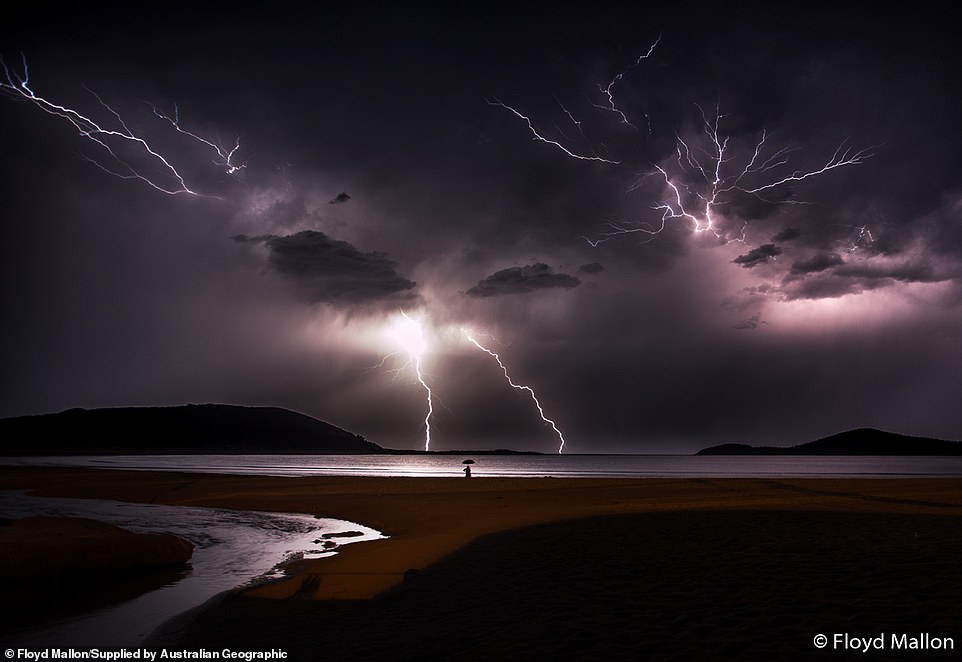 Floyd Mallon, 17, from New South Wales, witnessed this incredible weather at Fingal Bay. ‘For the composition, I decided to focus on a man standing at the edge of the water with an umbrella to add a sense of scale to the image,’ he said. 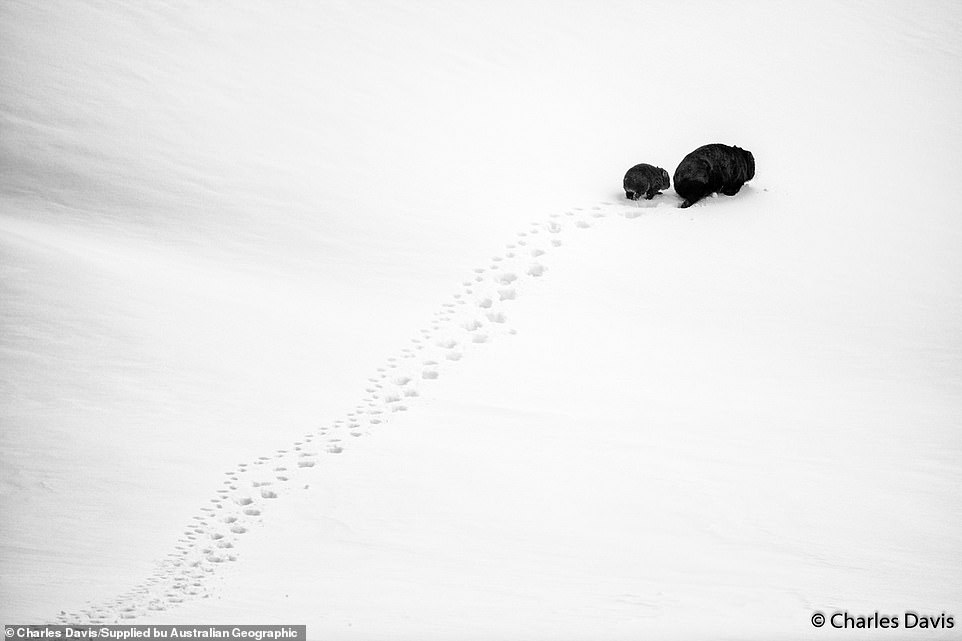 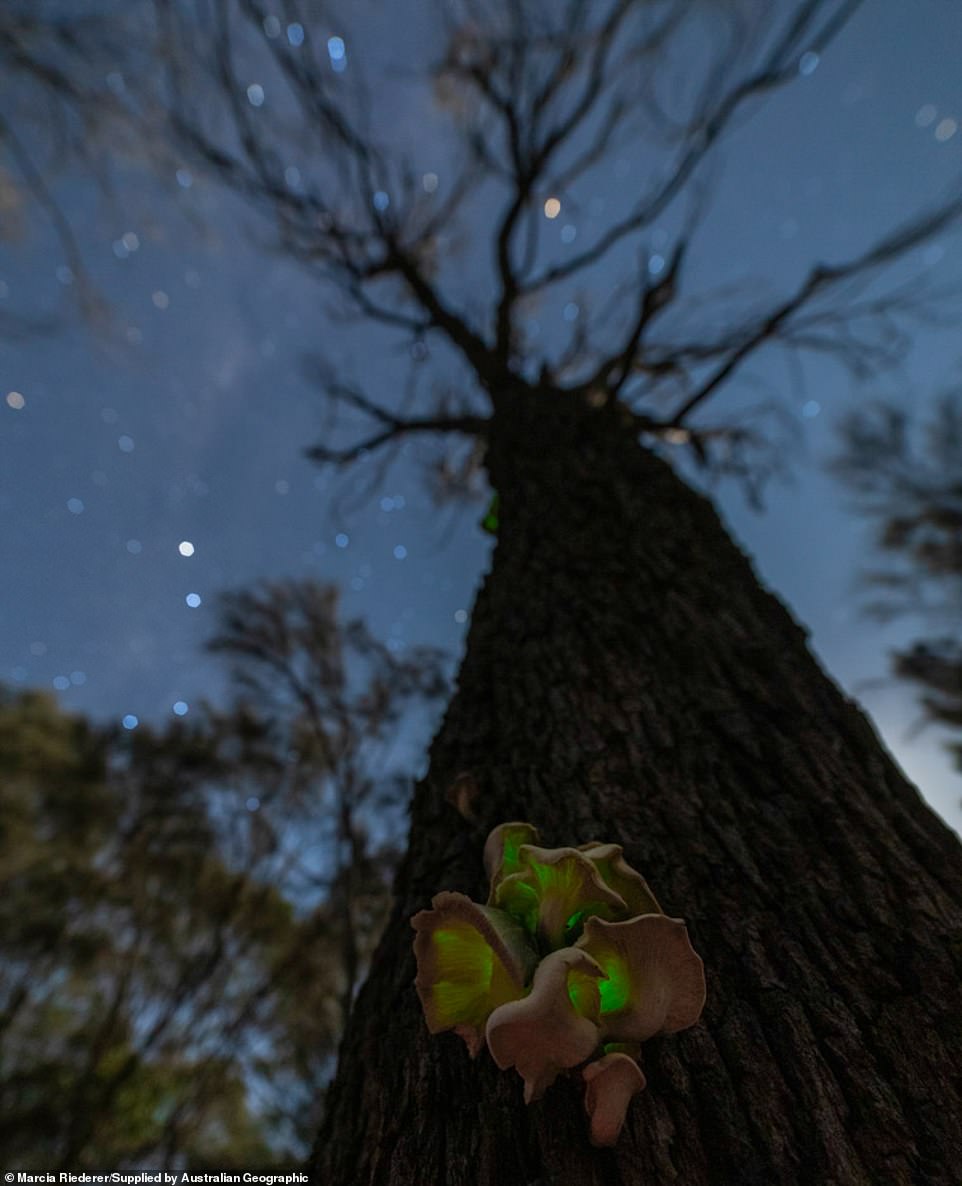 Eerie: The elusive ghost mushroom show starts after dark, when the green light of its bioluminescence glows across the pine forest on the Bellarine Peninsula. It seems like magic but the glowing works to attract insects that then help disperse the spores and spread the mushroom. 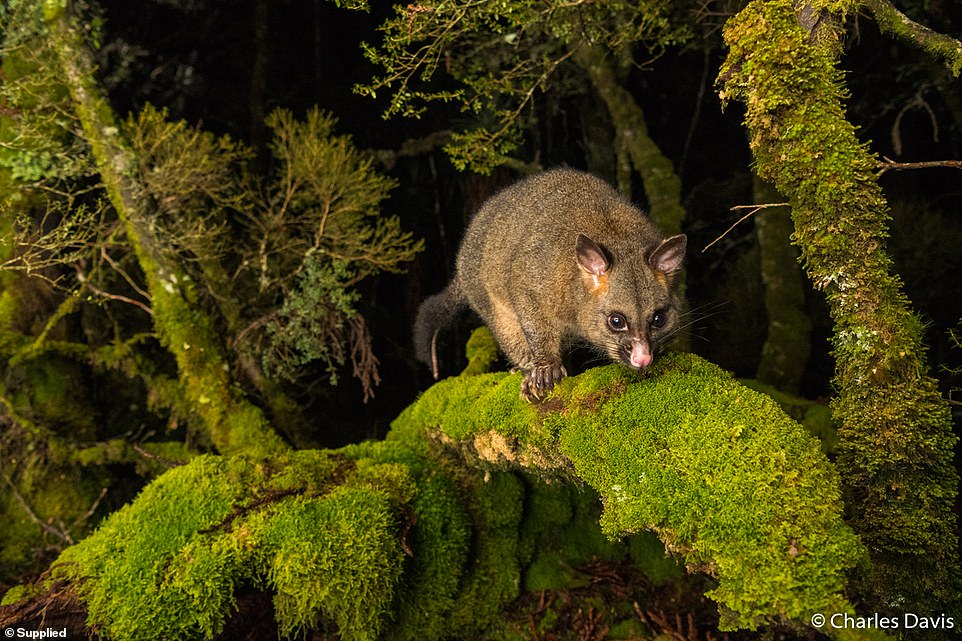 Here, Charles Davis snapped a common brushtail possum in Cradle Mountain, Tasmania. ‘I only had one flash and a remote which I used through the window,’ he said. ‘I pointed the flash at the cabin wall and used it to bounce and spread the light over a large area. The possums were already interested in our dinner so I rubbed a little juice from the pan into the moss to get the brushy where I needed it.’ 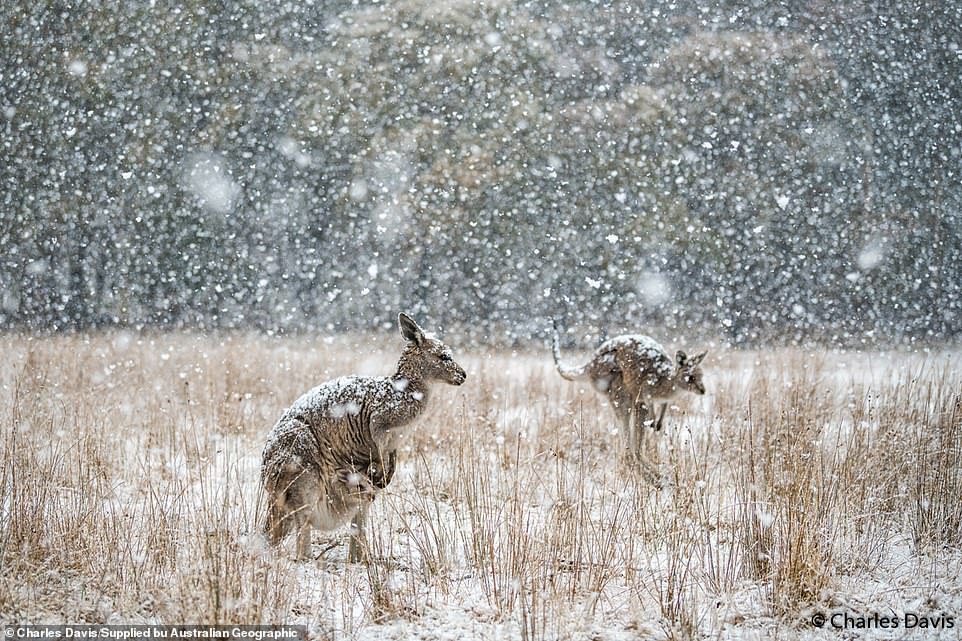 In its natural habitat: The Eastern grey kangaroo pictured in Kosciuszko National Park, New South Wales, by Charles Davis. ‘The snow started coming down like large snowballs and the roos could do nothing but stand and be engulfed in the blizzard,’ he said. ‘The snow swirled around them from all directions and in 10 minutes the world was white.’ Dramatic: Huge volumes of water make their way to the coastal plain below at Barron Falls, Kuranda, during a  flood. The image was obtained using a handheld camera by Neil Pritchard of Queensland. 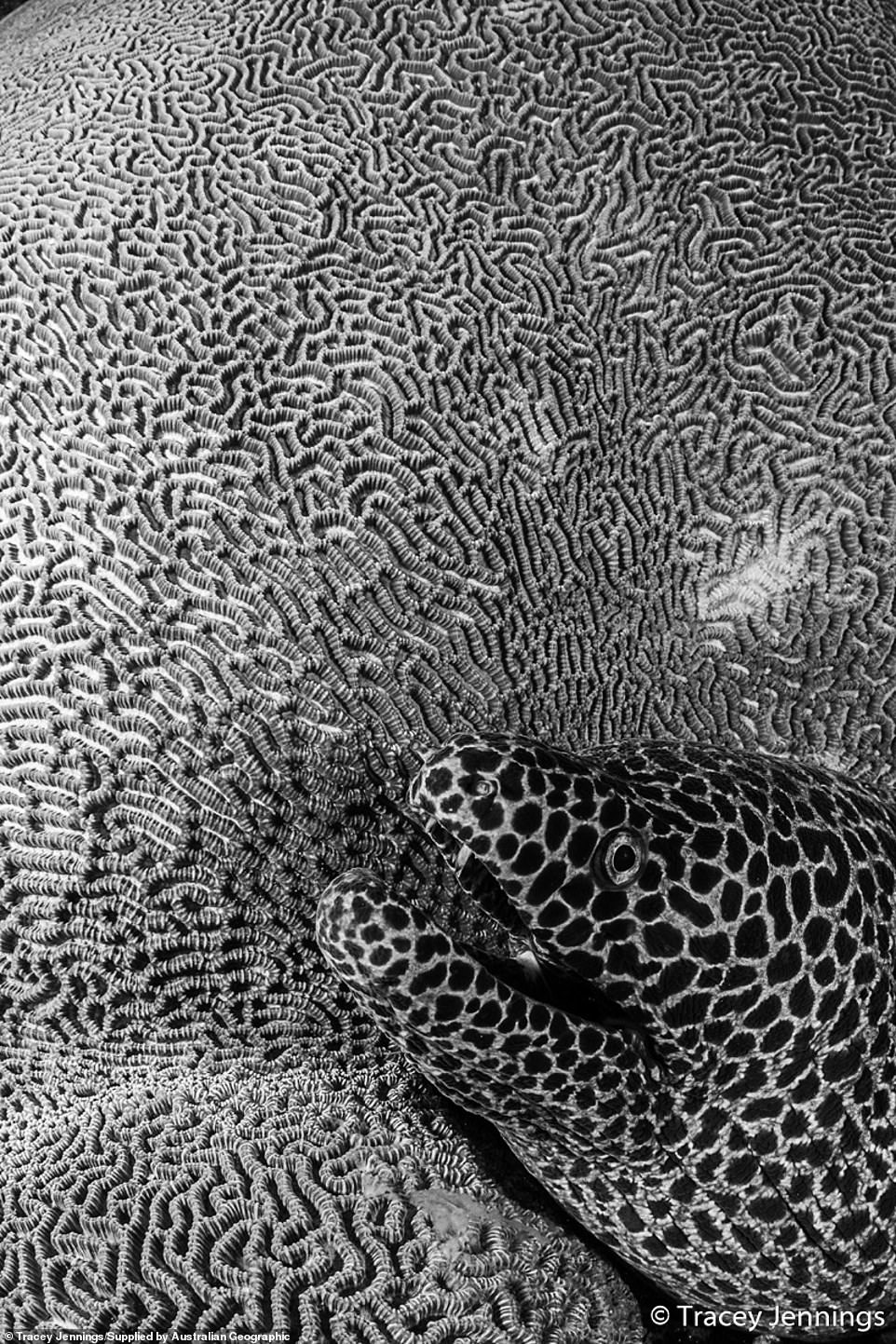 Double take: Tracey Jennings, from the UK, came across this amazing juxtaposition of a honeycomb moray eel and a textured brain coral in the Banda Sea, which is located in the Maluku Islands of Indonesia