Some say that Italy is the most beautiful country on earth.

Any doubters might like to cast an eye over these incredible images of the Italian landscape – and then reconsider.

The jaw-dropping pictures are all from a new book in Amber Books’ Visual Explorer Guide series called Italy, by Claudia Martin.

Among them are the pretty seaside town of Cinque Terre, Venice’s glorious canals and palace, the stomach-churning cliff roads of Amalfi and the Apennine range – the backbone of Italy.

Claudia writes: ‘The fifth most visited country in the world, Italy is steeped in history: Bologna is the world’s oldest university, St Peter’s Basilica in Rome is the world’s largest church and the leaning tower of Pisa is the world’s most tilting structure.

‘But with its mountains and lakes, islands and beaches, the Italian peninsula is much more than its ruins and museum pieces in scale, beauty and power. It is an island that simply cannot fail to impress.’ Scroll down to see MailOnline Travel’s pick of the 200 mesmerising images that appear in the book, with captions courtesy of the author…

The imposing buildings of the Italian capital city, Rome. Between 100BC and 400AD, Rome was the largest city in the world. Roman customs, language, law, engineering, and architecture were marched across the vast Roman lands in Europe, North Africa and Western Asia 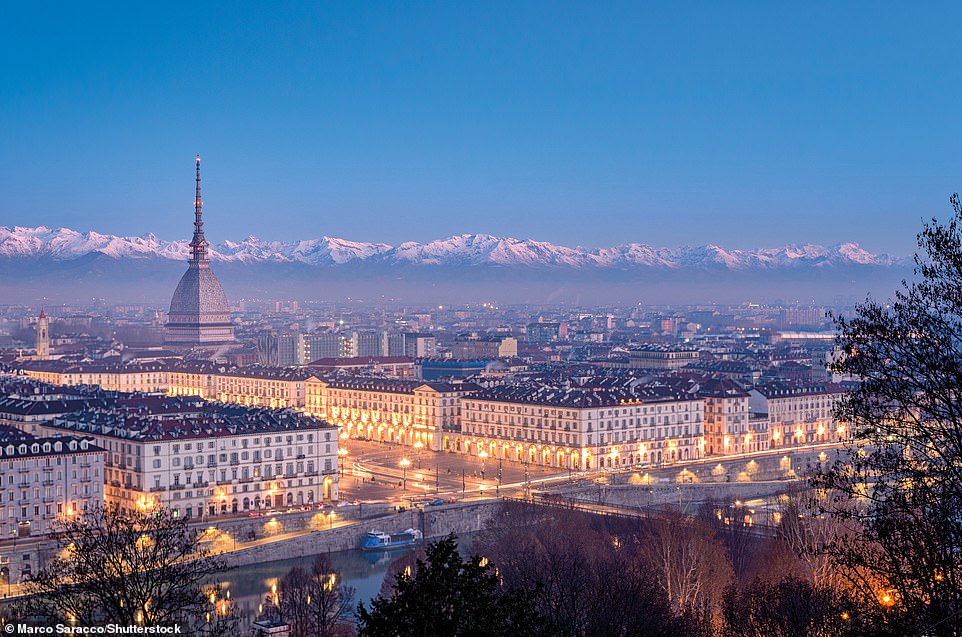 Soaring over Turin’s cityscape is the domed and spired Mole Antonelliana, which now houses the National Cinema Museum, making this monumental building the tallest museum in the world. In the foreground is the immense Piazza Vittorio Veneto, while the Alps form a dramatic backdrop 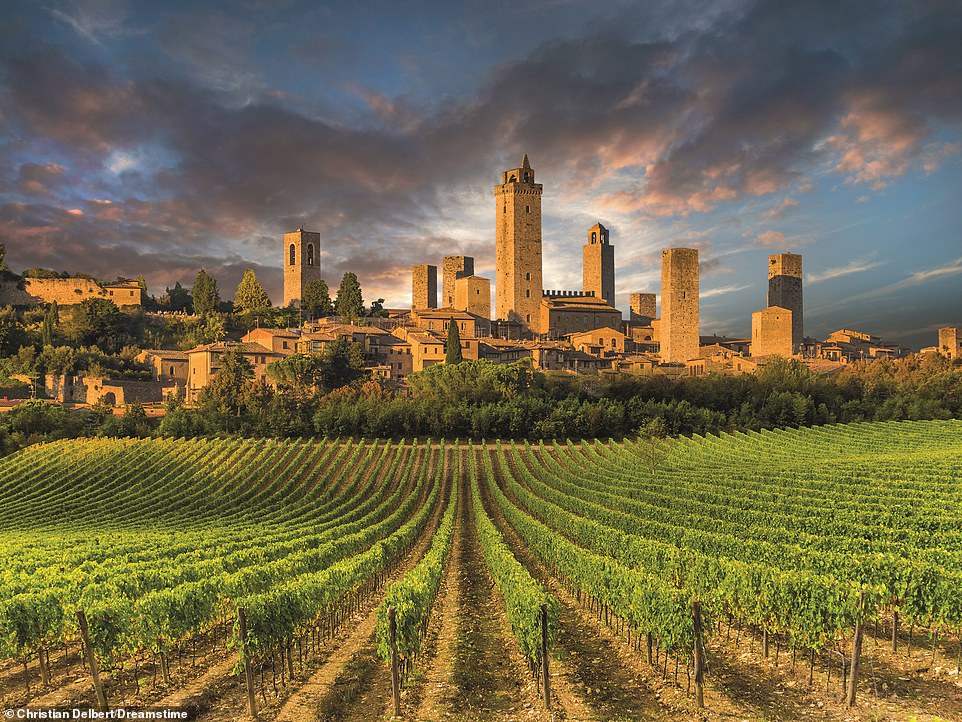 The walled hill town of San Gimignano in Tuscany is known as the ‘Town of Fine Towers’ due to the unique preservation of its medieval tower houses. There were 72 of these during the town’s heyday, of which 14 survive today 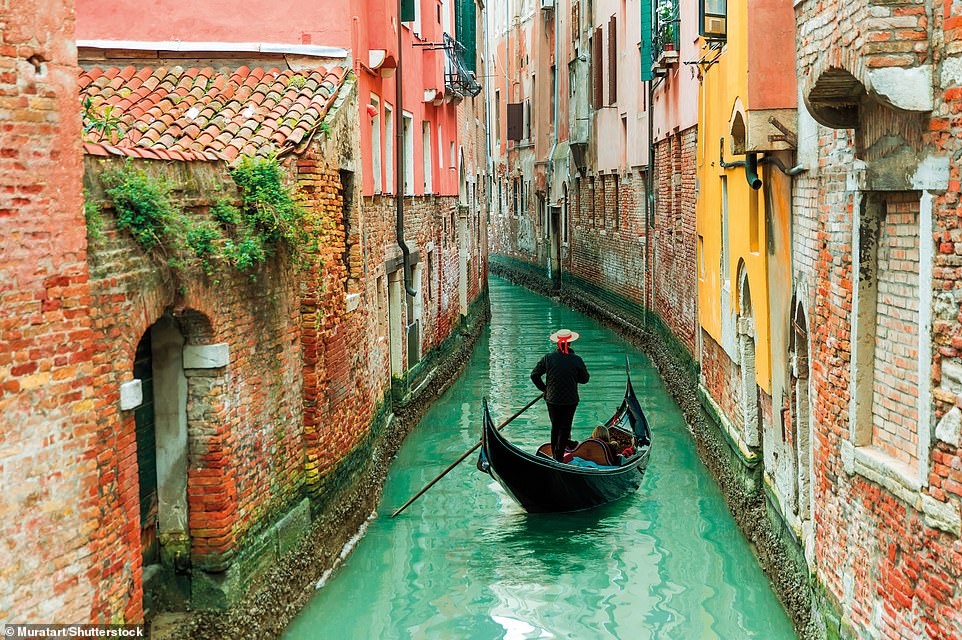 Gondolas are flat-bottomed rowing boats, designed for negotiating Venice’s shallow and often narrow waterways. A gondolier sculls rather than punts with the oar, which is not fixed to the hull. In 2010, the first female gondolier gained her licence from the guild of gondoliers 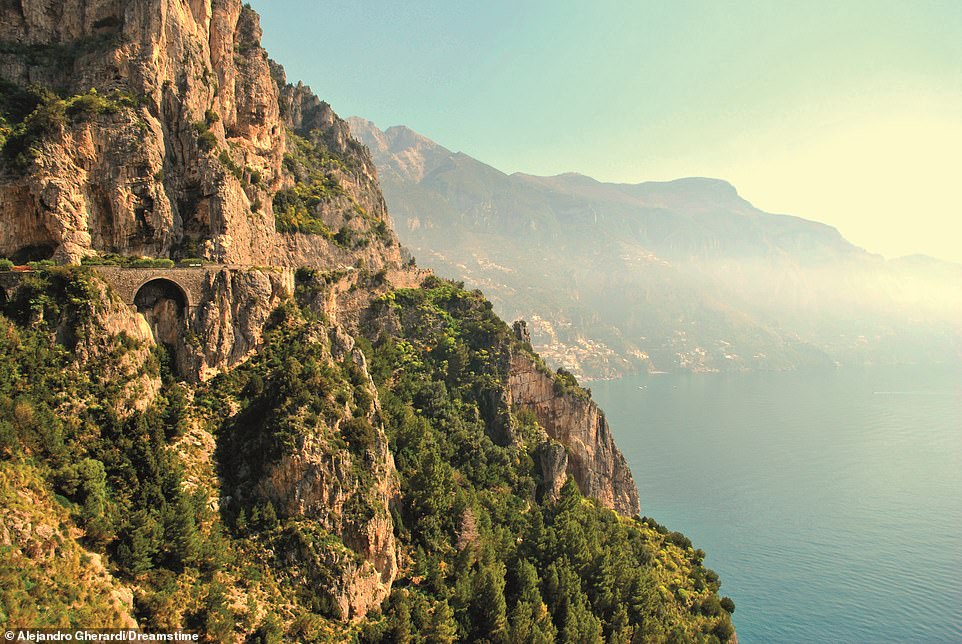 The SS 163 Amalfitana is one of the world’s most thrilling coastal drives, complete with dizzying drops, hairpin switchbacks and narrow viaducts to bridge the gaps where carving the roadway out of the cliff face became simply impossible. The route is famed not only for its views but for the distinct lack of caution shown by many of its drivers 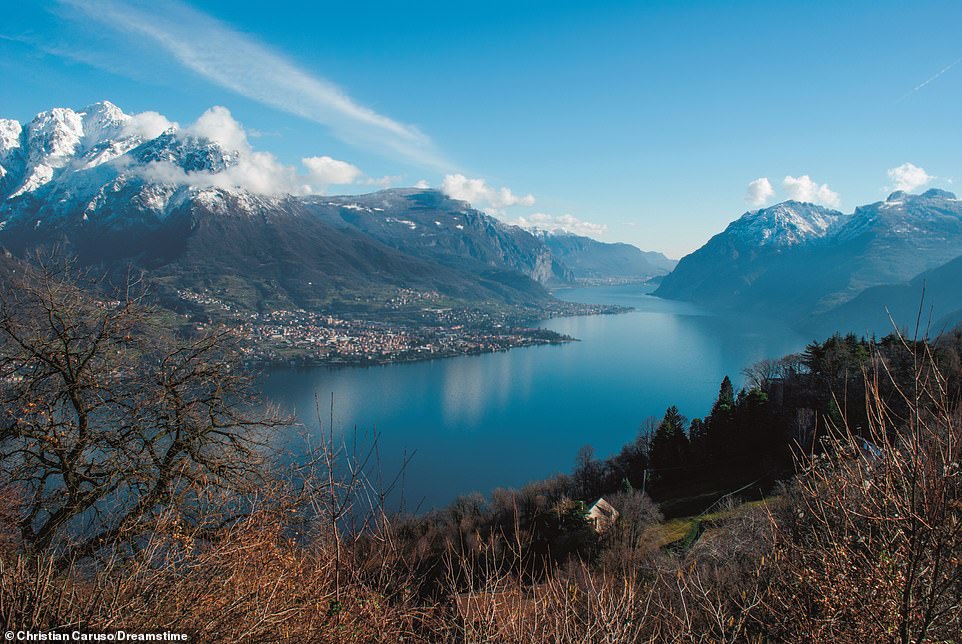 Although it is 29 miles long, Como is the smallest of the big three Italian lakes – the other two being Maggiore and Garda. The lake has been a popular retreat for the wealthy since Roman times, when author and magistrate Pliny the Younger built two villas by the lake, called Comedy and Tragedy

Overlooked by Mount Vesuvius, there was a settlement on the site of Naples as early as the 9th century BC. By 750 BC, the Greeks had staked a claim to the spot, naming their colony Neapolis (meaning New City). After the Normans took the city in 1139, it was passed from one dynasty to the next, including the Angevins and the Aragonese 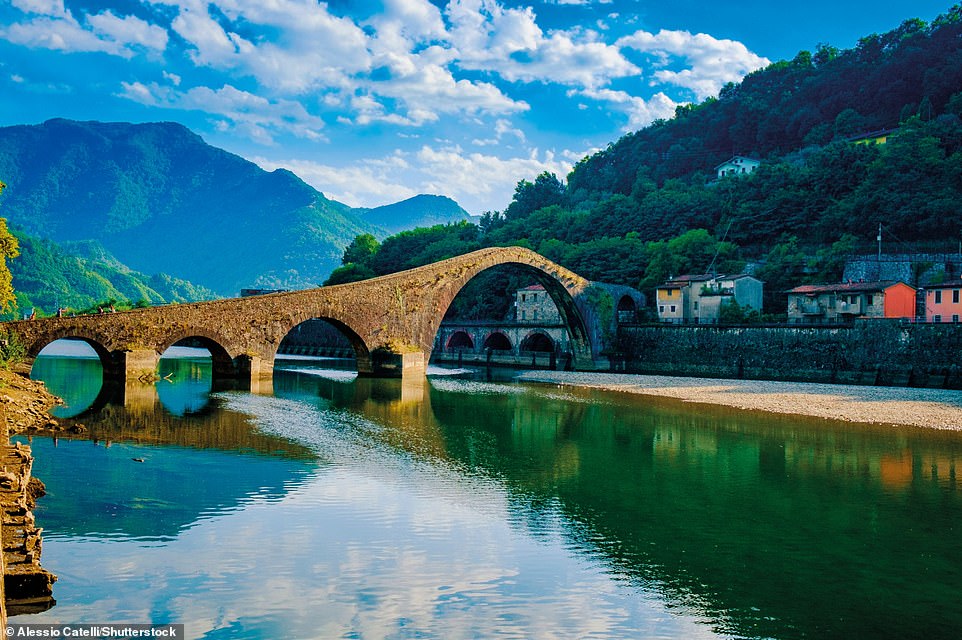 Known locally as the Ponte del Diavolo (Devil’s Bridge) after a legend about the devil’s involvement in its construction, this bridge in Tuscany was built in the late 11th century as a crossing over the River Serchio for those on the Via Francigena pilgrimage route from France to Rome

Bari’s old town, perched on a headland, is a maze of winding alleys, shadowy passageways and dead-end courtyards, designed to protect the inhabitants from wind and sun, as well as to confuse invaders. It has the same effect on tourists, who will lose their way no matter how good their map

The backbone of Italy, the Apennine range, runs for 750 miles down the length of the Italian peninsula. The mountains have preserved some of the most intact montane forests and grasslands in the whole of Europe. Here there are 1,800 plant species, including lizard and tongue orchids, as well as some of the last refuges for the vulnerable Italian wolf and other large carnivores 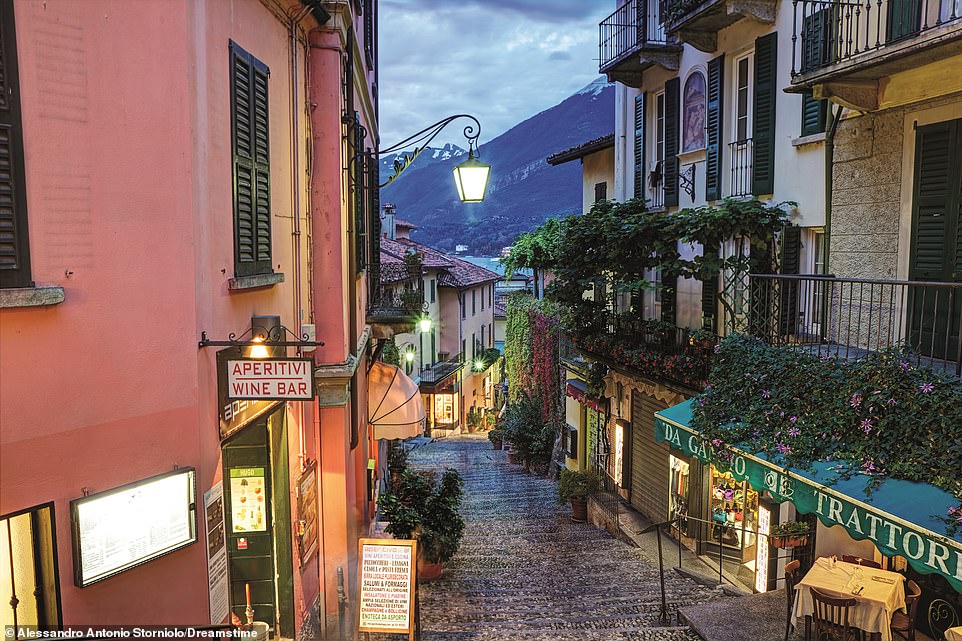 Positioned on the tip of the triangular piece of land that divides the Como and Lecco branches of the lake, Bellagio is often named as the most beautiful town in Italy. Despite its souvenir shops, Bellagio’s stepped, cobbled streets are still charming, particularly after the day trippers have left for the night 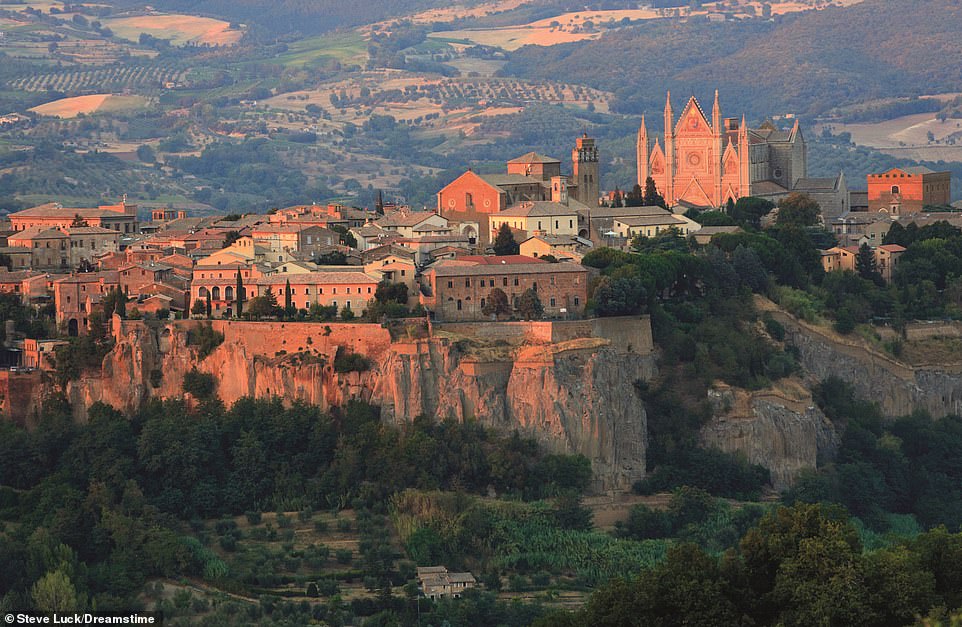 The old town of Orvieto sits on top of a butte of volcanic rock that rises 980ft (300m) from the surrounding valley. Much of the town is built from the same volcanic tuff. The façade of the cathedral, with its shimmering mosaics, dwarfs the surrounding buildings 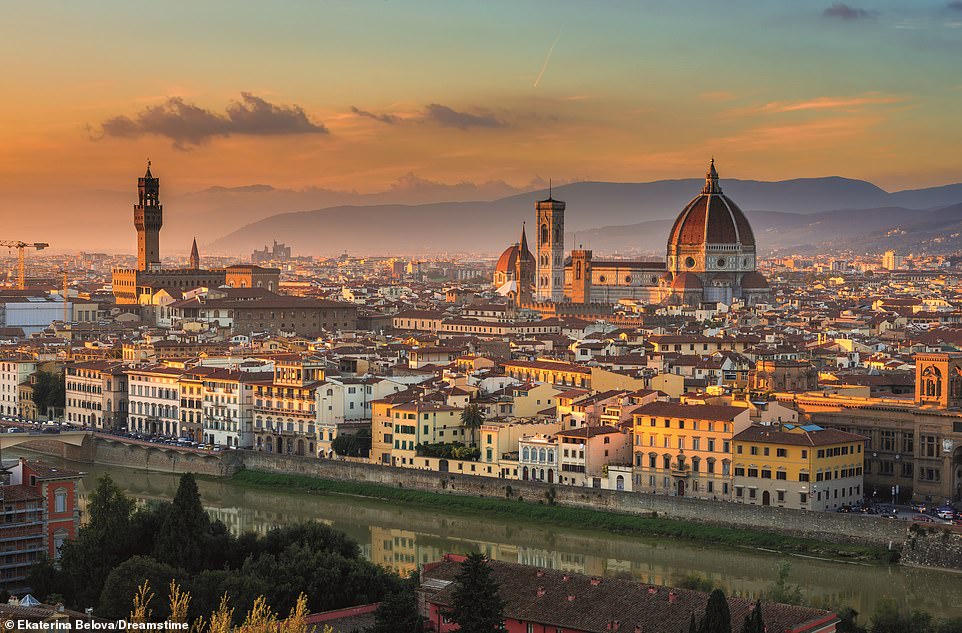 The Duomo, also known as Santa Maria del Fiore, seems to hover over the ruddy roofs of the city of Florence. Just a stroll away down Via dei Calzaiuoli is the Palazzo Vecchio, the city’s castle-like town hall with its 308ft (94m) tower. A replica of Michelangelo’s David stands in front of the building in the Piazza della Signoria, while the original remains safe in the Accademia gallery to the north of the Duomo 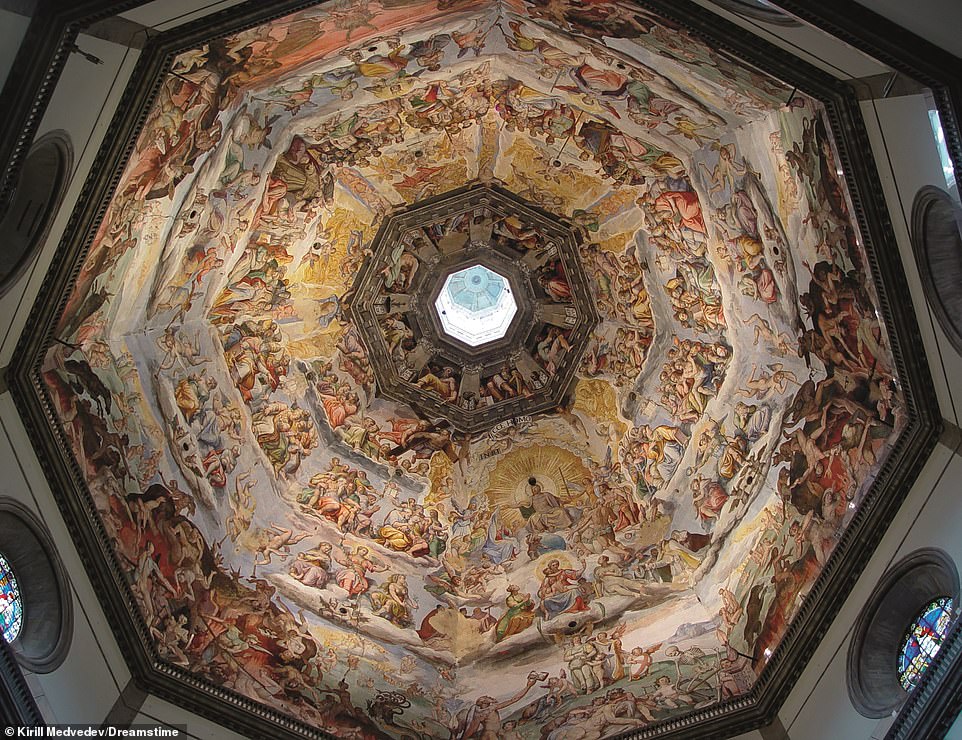 Florence’s Duomo’s octagonal dome, completed in 1436, was designed by Filippo Brunelleschi. It remains the largest brick and mortar dome ever constructed and a testament to Brunelleschi’s engineering genius. The interior is decorated with a fresco of the Last Judgement by Vasari and Zuccari 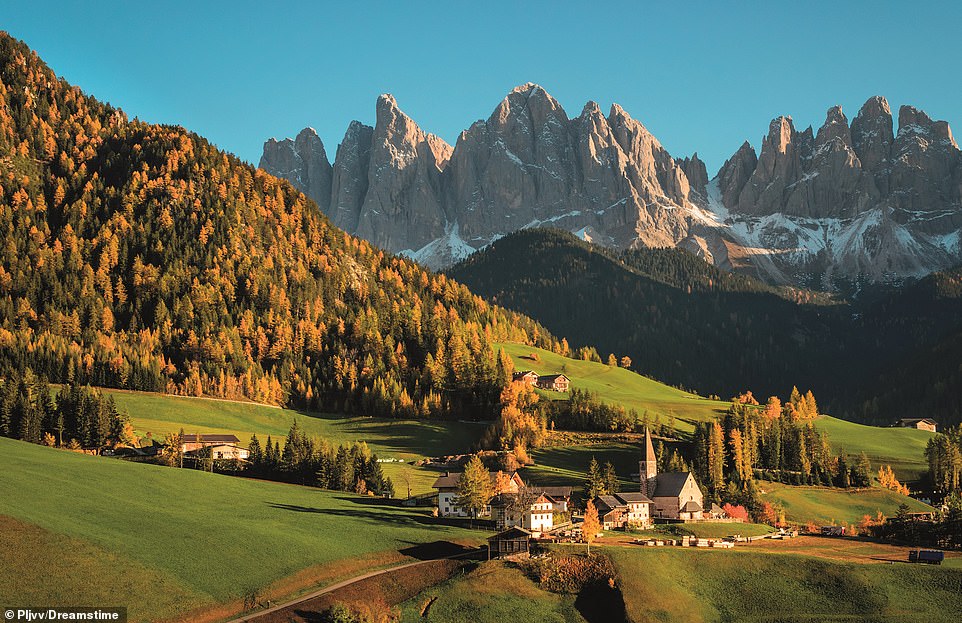 The rugged Odle mountains rear their heads above the Val di Funes and the pretty Alpine church of Santa Maddalena. The Sass Rigais is the highest of these jagged peaks at 3,025m (9,925ft) 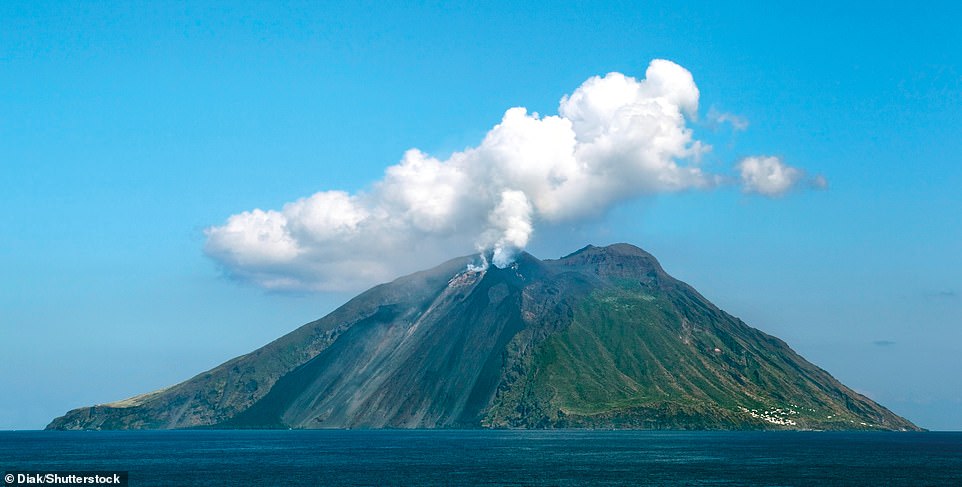 Stromboli is the most volcanically active of the Aeolian Islands: its cone, which has three active craters, sends up showers of sparks and glowing rock every 20 minutes or so. Despite this, the island has a year-round population of 500, with many more visitors in high season to its chic hotels and black sand beaches 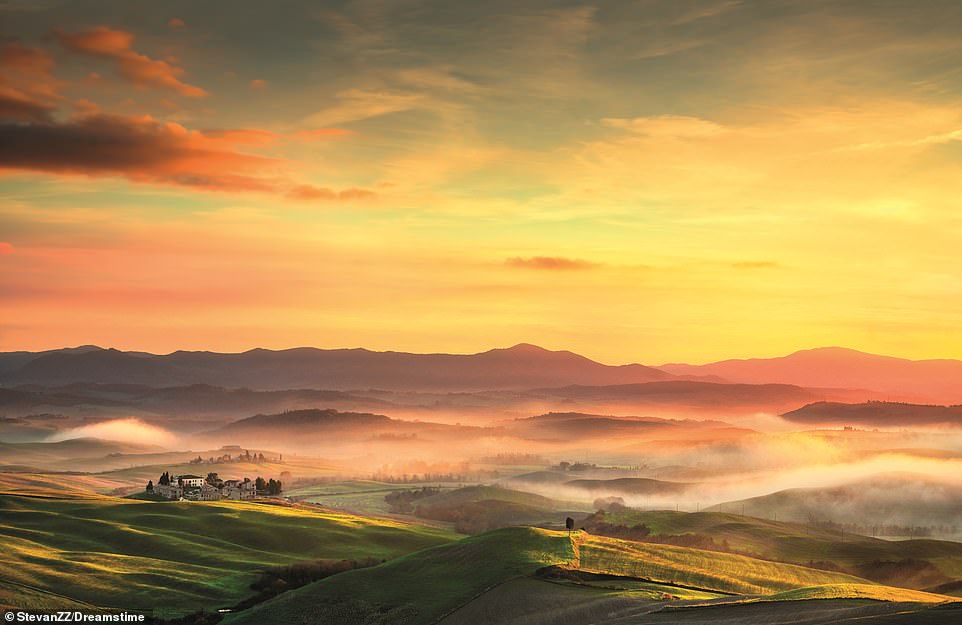 The valley of the River Cecina near Volterra in Tuscany is characterised by volcanic hills, punctuated by steep ravines and cliffs. The world’s first geothermal energy power plant was built nearby, in a region known as the Valle del Diavolo (Devil’s Valley), in 1911 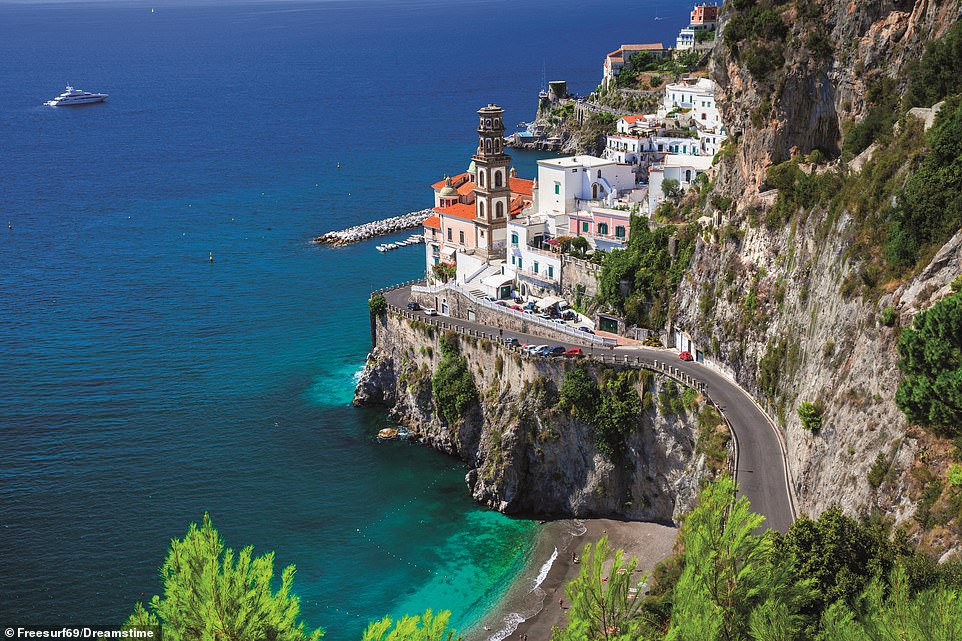 Perched on the cusp of the sea, the city of Atrani has a surface area of only 0.12 square kilometres (0.05 square miles). The bell tower of the Rococo Church of St Mary Magdalene, with its distinctive brown tuff, was built in the 18th century 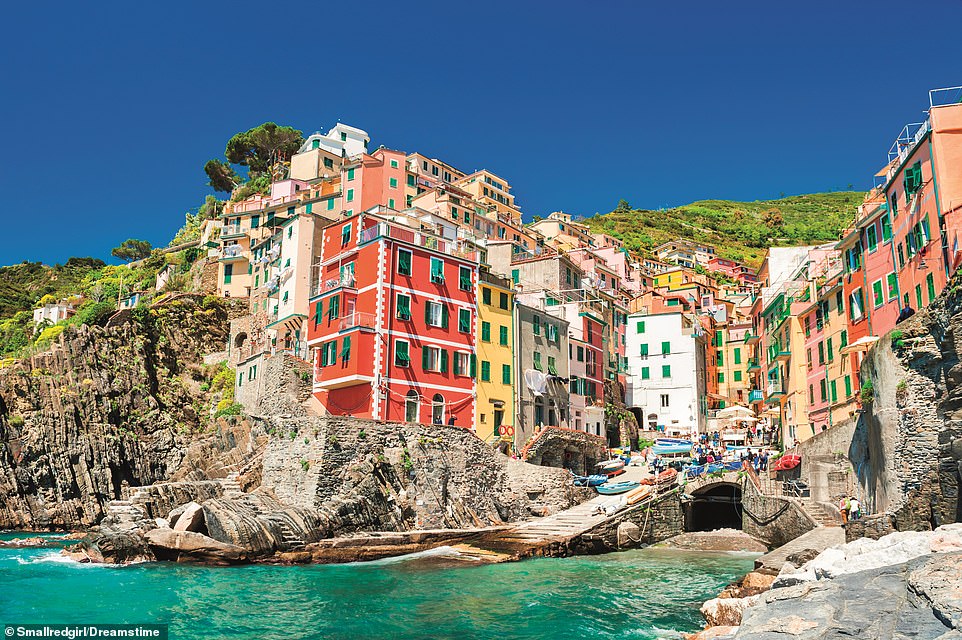 The most southerly of the Cinque Terre and the most easily reached by road, Riomaggiore is also the most visited of these picturesque villages. A paved footpath, the Via dell’Amore (Path of Lovers), connects the village with Manarola, the next village to the north 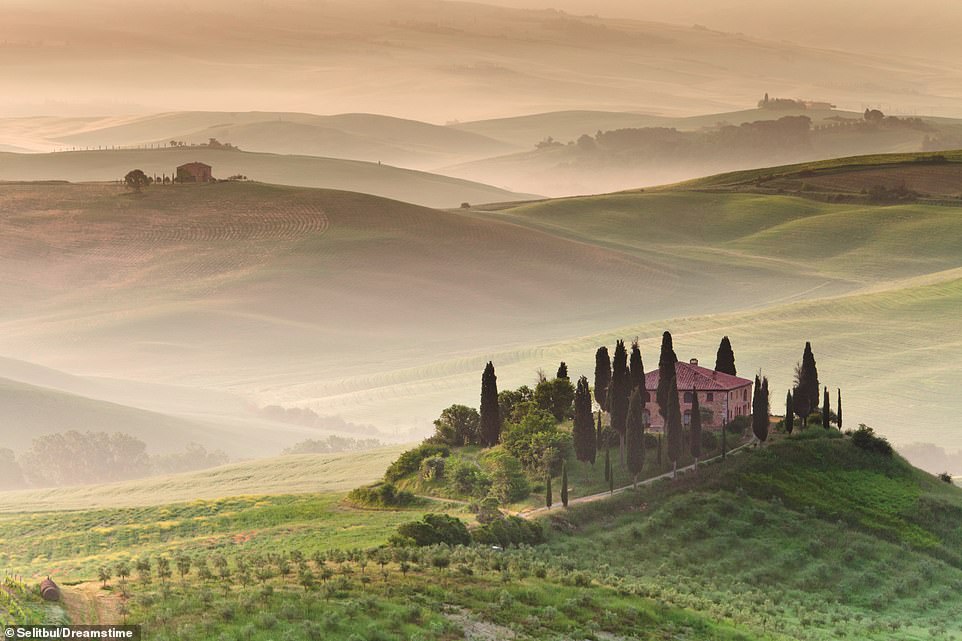 The Orcia Valley is a Unesco World Heritage Site due to the fact that its landscapes were depicted time and again by Renaissance painters, influencing the very way that we view humanity’s relationship with nature. Cypress trees have come to be a symbol of this valley 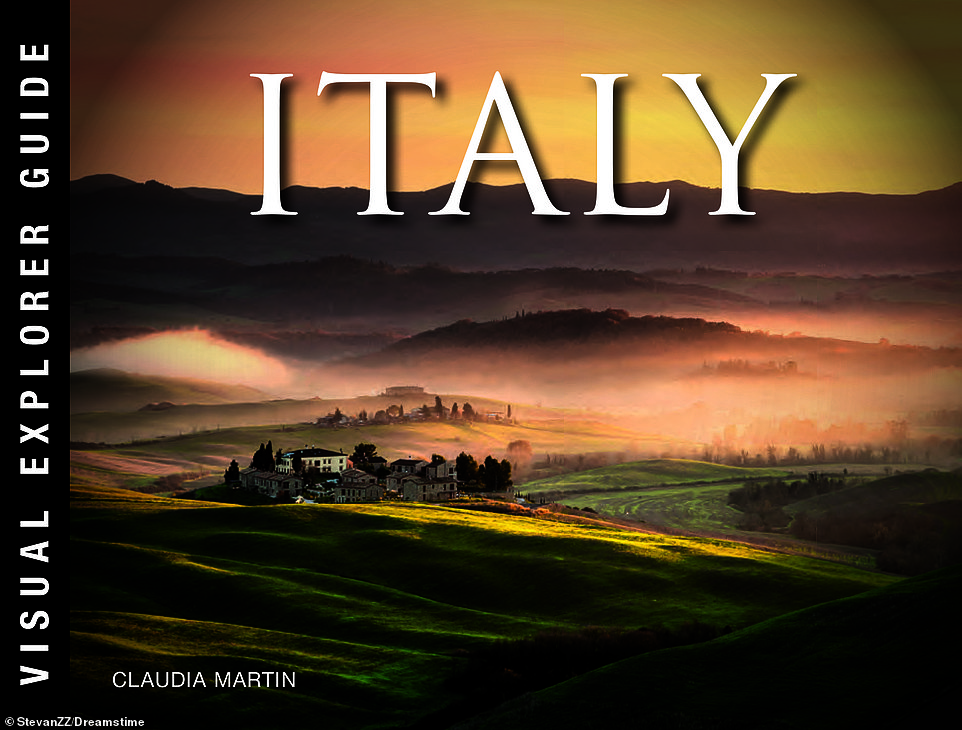 All images are taken from the book Italy by Claudia Martin (ISBN 978-1-78274-870-0), part of the Visual Explorer Guide series, published by Amber Books Ltd and available from bookshops and online booksellers (RRP £9.99). Pictured is the Val di Cecina near Volterra, Tuscany