Infrared images of the gas giant Jupiter show the massive planet’s churning atmosphere like never before – beyond what we can see with the human eye.

Hawaii’s Gemini North observatory and the NASA Hubble space telescope captured the largest planet in the solar system in a range of light wavelengths.

The images show the planet at infrared, visible, and ultraviolet, revealing details of the atmosphere of the gas giant not visible without specialist observatories.

These views reveal a range of details in atmospheric features such as the Great Red Spot, superstorms, and gargantuan cyclones stretching across the planet’s disk. 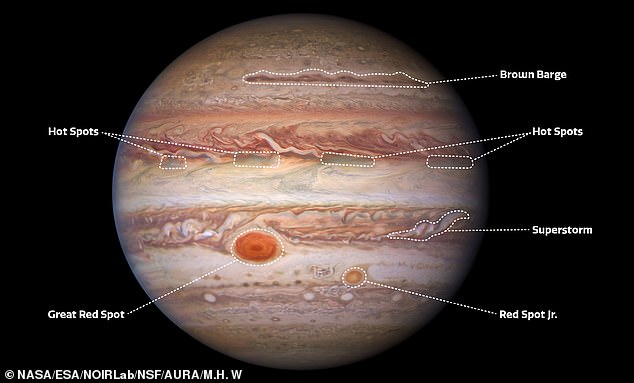 Labels added to this visible-light Hubble Space Telescope image of Jupiter point out several atmospheric features on the planet, including a ‘brown barge’, four hot spots, a superstorm, the Great Red Spot, and Red Spot Jr

WHAT IS THE ELECTROMAGNETIC SPECTRUM?

The electromagnetic spectrum is the range of frequencies covering the spectrum of radiation.

It covers wavelengths from thousands of miles to a fraction of the size of an atomic nucleus.

Bands of electromagnetic waves are:

All of the images were taken at the same time, 15:41 BST, on January 11, 2017, and act to highlight the advantages of ‘wavelength astronomy,’ the team said.

The visible and ultraviolet views were captured by the Wide Field Camera 3 on the Hubble space telescope, while the infrared image comes from the Near-InfraRed Imager (NIRI) instrument at Gemini North in Hawaii.

In the case of Jupiter, the planet has a vastly different appearance in the infrared, visible, and ultraviolet observations.

The planet’s Great Red Spot – the famous persistent storm system large enough to swallow the Earth whole – is a prominent feature of the visible and ultraviolet images, but it is almost invisible at infrared wavelengths.

Jupiter’s counter-rotating bands of clouds, on the contrary, are clearly visible in all three views, the team behind the images confirmed.

Observing the Great Red Spot at multiple wavelengths yields other surprises, according to the astronomers at the observatory.

The dark region in the infrared image is larger than the corresponding red oval in the visible image. This discrepancy arises because different structures are revealed by different wavelengths.

These are the particles that give the Great Red Spot its distinctive hue by absorbing blue and ultraviolet light.

The Great Red Spot isn’t the only storm system visible in these images though, as the smaller storm system known as Red Spot Jr appears in visible and UV.

This storm — to the bottom right of its larger counterpart — formed from the merger of three similar-sized storms in 2000 and has a defined red outer rim in visible light. 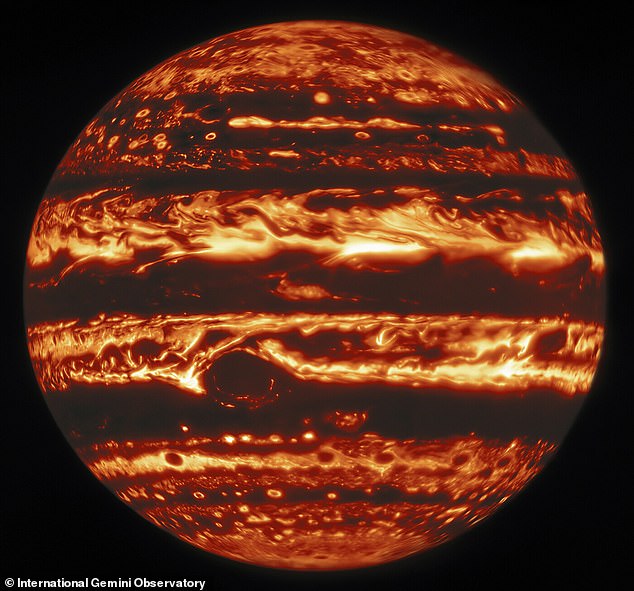 This infrared view of Jupiter was created from data captured on 11 January 2017 with the Near-InfraRed Imager (NIRI) instrument at Gemini North. It is actually a mosaic of individual frames that were combined to produce a global portrait of the planet

In the infrared, however, Red Spot Jr is invisible, lost in the larger band of cooler clouds, which appear dark in the infrared view.

Like the Great Red Spot, Red Spot Jr is coloured by chromophores that absorb solar radiation at both ultraviolet and blue wavelengths, giving it a red colour in visible observations and a dark appearance at ultraviolet wavelengths.

Just above Red Spot Jr in the visible observations, a Jovian superstorm appears as a diagonal white streak extending toward the right side of Jupiter’s disk.

One atmospheric phenomenon that does feature prominently at infrared wavelengths is a bright streak in the northern hemisphere of Jupiter.

This feature – a cyclonic vortex or perhaps a series of vortices – extends nearly 45,000 miles in the east-west direction. 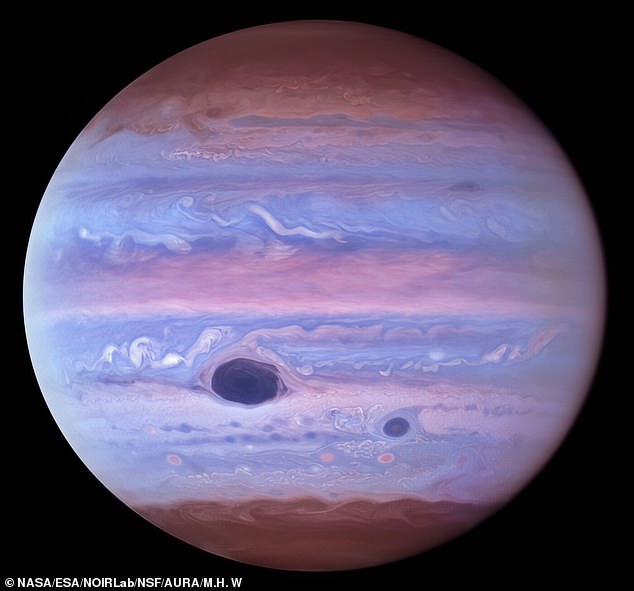 This ultraviolet image of Jupiter was created from data captured on 11 January 2017 using the Wide Field Camera 3 on the Hubble Space Telescope. The Great Red Spot and Red Spot Jr absorb ultraviolet radiation from the Sun and therefore appear dark in this view

At visible wavelengths the cyclone appears dark brown, leading to these types of features being called ‘brown barges’ in images from NASA’s Voyager spacecraft.

At ultraviolet wavelengths, however, the feature is barely visible underneath a layer of stratospheric haze, which becomes increasingly dark toward the north pole.

Similarly, lined up below the brown barge, four large ‘hot spots’ appear bright in the infrared image but dark in both the visible and ultraviolet views.

Astronomers discovered such features when they observed Jupiter in infrared wavelengths for the first time in the 1960s.

As well as providing a beautiful scenic tour of Jupiter, these observations provide insights about the planet’s atmosphere, with each wavelength probing different layers of cloud and haze particles.

Experts have studied recent evidence gathered from Nasa’s Juno spacecraft to reveal the reason why gases form bands on Jupiter.

Clouds of ammonia at Jupiter’s outer atmosphere are carried along by jet streams to form Jupiter’s regimented coloured bands.

Jupiter’s jet streams reach as deep as 1,800 miles (3,000 km) below Jupiter’s clouds, which are shades of white, red, orange, brown and yellow.

The gas in the interior of Jupiter is magnetised, which researchers believe explains why the jet streams go as deep as they do but don’t go any deeper.

There are also no continents and mountains below Jupiter’s atmosphere to obstruct the path of the jet stream.

This makes the jet streams on Jupiter simpler than those on Earth and cause less turbulence in it’s upper atmosphere.