A manta ray with metal hooks stuck in her eye has been filmed begging a group of snorkellers to save her life.

The heartbreaking footage shows the ray, nicknamed Freckles by local divers, approaching the group on Ningaloo Reef in Western Australia.

The three-metre-wide gentle giant flipped her body over to reveal she had several metal hooks stuck under her right eye. 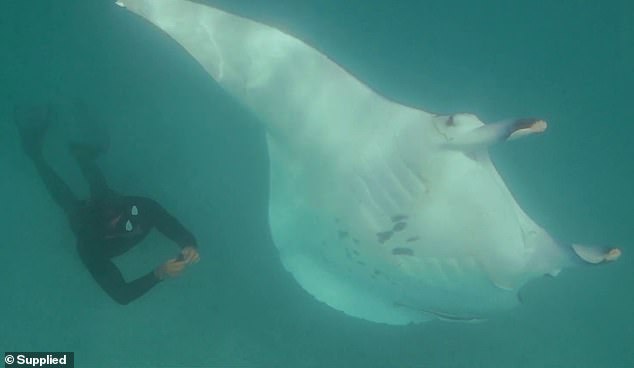 The three-metre-wide gentle giant flipped her body over to show them the hooks as if she knew that without the diver’s help, she would be in danger

Underwater photographer Jake Wilton decided he simply had to remove the hooks to save the beautiful creature’s life.

After several attempts, Mr Wilton cleared Freckles, saving her from a nasty infection or even blindness.

Mr Wilton said he believes Freckles recognised and trusted him because he regularly guides snorkelers in that area.

‘She got closer and closer and then started unfurling to present the eye to me,’ he said.

‘I knew we had to get the hooks out of her eye or she would have been in big trouble.’

After a few attempts, Mr Wilton needed one final five to clear the hooks.

‘I went down for one last try and the manta stayed completely still in the water,’ he said.

The video shows Jake rise triumphantly from the ocean with the hooks before the ray swims majestically away.

British marine biologist Monty Halls, who was aboard the boat at the time, said the manta must have known Mr Wilton was trying to help.

‘Jake went down and down again. She never moved. I’m sure that manta knew that Jake was trying to get the hooks out,’ he said. 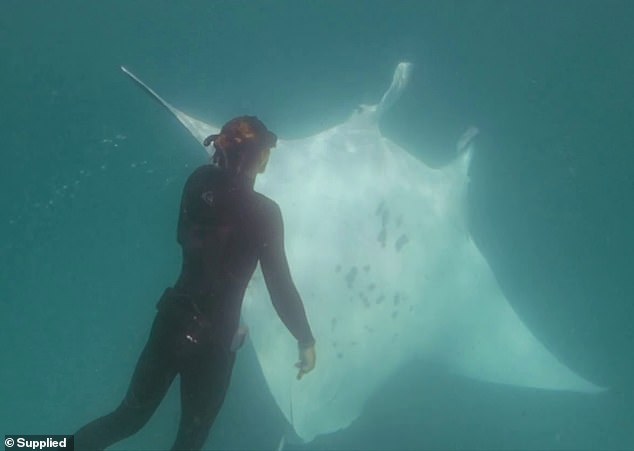 Mr Wilton went down one more time to try to help the manta and as he approached, the large animal stayed completely still in the water.

‘That manta absolutely understood what was going on. Jake went down again and again and she just remained still for him,’Mr Halls said.

‘I came to Ningaloo Reef as it’s one of the best places in the world to swim with whale sharks – so to experience this as well is just phenomenal.’

Unlike stingrays, manta rays don’t have an external spike and are totally harmless to humans.

They can grow up to seven meters wide and live for around 50 years.

Experts believe that the injured manta’s eye could have become infected, leading to blindness and even death.

Coral Bay, located along a section of Ningaloo Reef, is one of the best places in the world to swim with manta rays which congregate in large numbers year-round.

Other marine wildlife which can be spotted on the World-heritage listed reefinclude humpback whales, dolphins, whale sharks, dugongs and turtles. 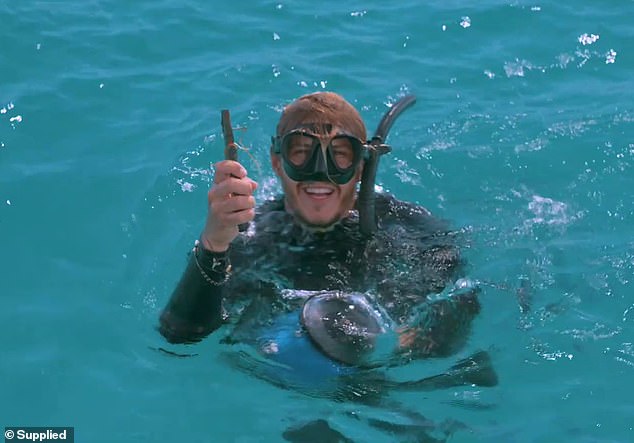 After several attempts, Jake was able to successfully remove the hooks from underneath Freckles