This is the incredible moment the birth of an endangered baby rhino was captured on CCTV cameras at Chester Zoo.

Thrilled zookeepers watched the birth of the rare greater one-horned rhino live on camera as 15-year-old mother Asha delivered her newborn calf at 4.24pm on October 14.

Heartwarming video footage shows the youngster arriving into the world – already weighing 50kg (more than 7 stone) – before Asha turns around to tenderly nuzzle her newborn, who will grow to around 1.7 tonnes.

Adorable photos show the new arrival bonding closely with her mother and already sporting the same slightly wrinkled armoured plating as her parents.

Zoo keepers have picked three names for the new calf and the public can vote for their favourite.

Conservationists are celebrating the birth of the endangered species as only 3,000 of them remain in the wild. 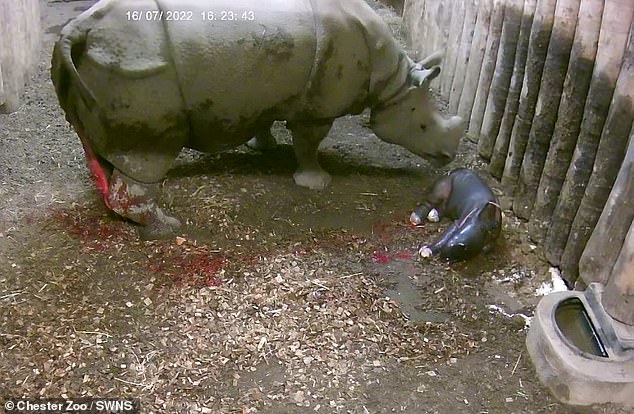 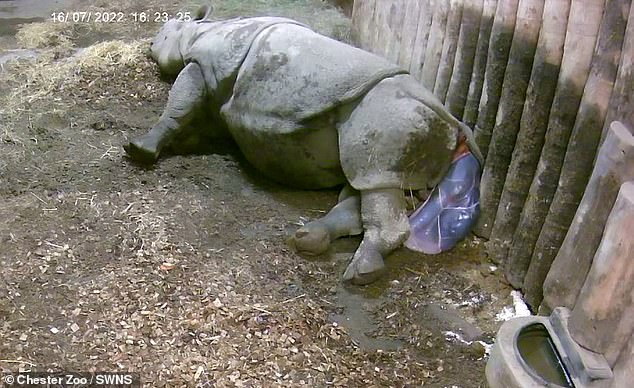 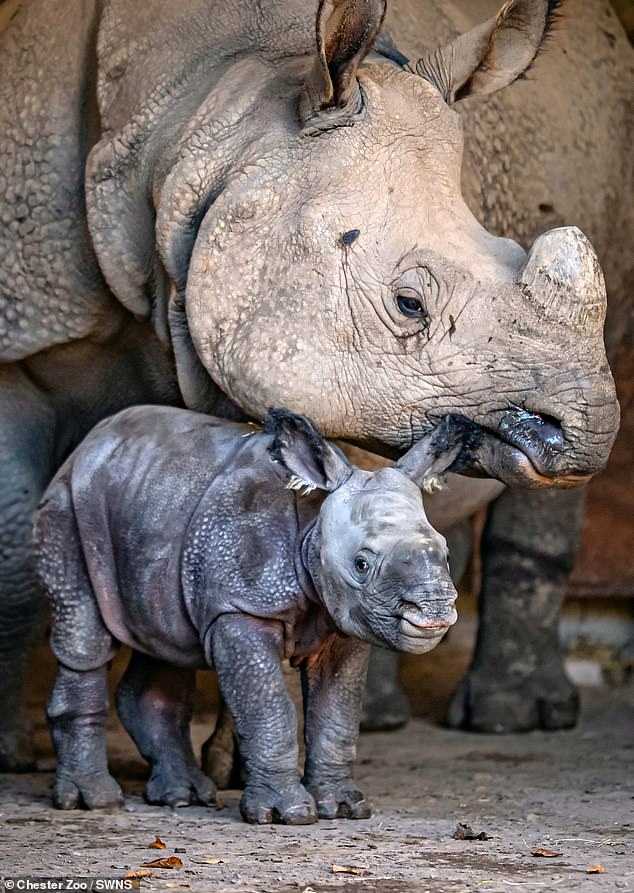 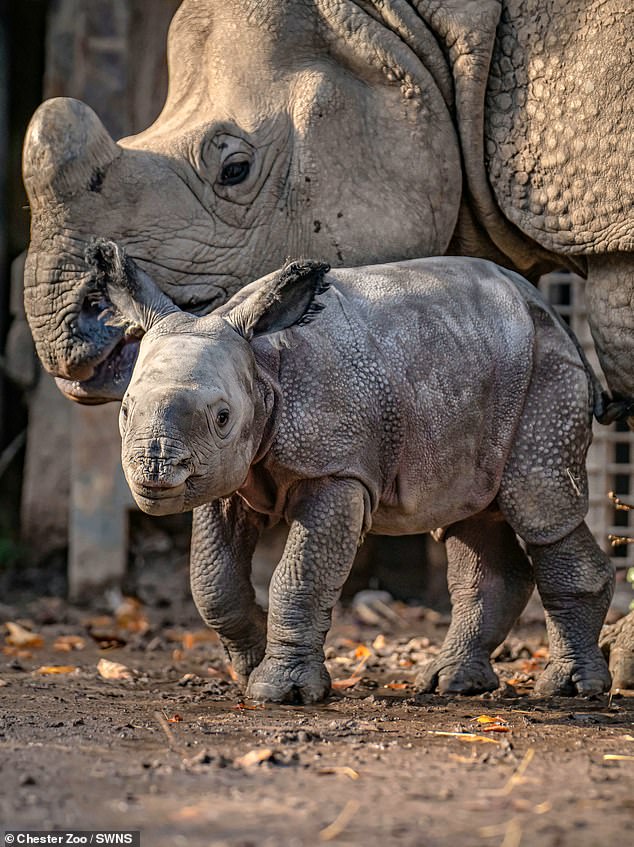 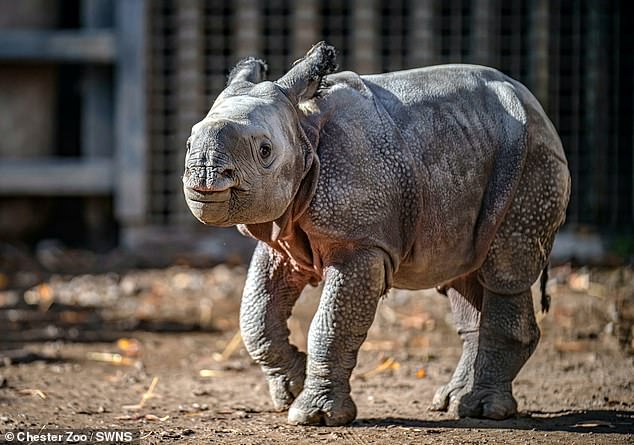 Greater one-horned rhinos were once found roaming across the entire northern part of the Indian subcontinent, but is now only present in a small area in India and Nepal.

They are listed as vulnerable to extinction as they battle illegal poaching for their horns and habitat loss.

Keepers said they had to wait patiently for the calf’s arrival as greater one-horned rhinos are pregnant for around 15 months.

‘It’s been four years since a greater one-horned rhino calf was born here at Chester Zoo and they really are an incredible sight.

‘On the day the calf was born, we noticed that Asha was uncharacteristically lethargic and off her food so we had a suspicion that she was soon to give birth. 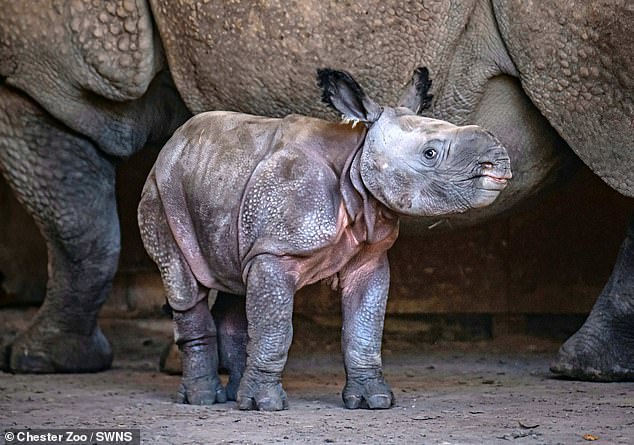 Asha’s pregnancy was tracked by the zoo’s onsite endocrinology lab, which monitors the hormones 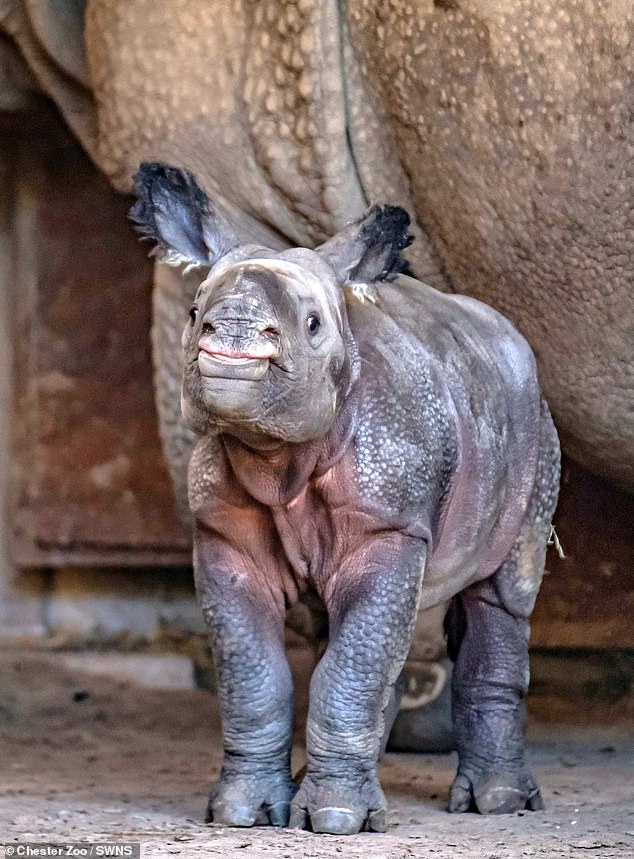 The new calf is expected to grow to around 1.7 tonnes – but despite the enormous stature of the species, they are said to have a ‘soft side’

‘We saw her water break at around 4.10pm as we watched on remotely via our hidden cameras, then at 4.24pm, she pushed her little one out into the world.

‘It was a true privilege to witness such a special event.

‘The sheer size of this species is incredible – the calf was born weighing 50kg and she’ll grow to around 1.7 tonnes.

‘But despite their enormous stature, this species has a really soft side. Mum and calf have been so relaxed and calm, spending time side-by-side bonding together.

‘In the wild, rhinos are under threat from habitat loss, as well as poaching.

‘It’s a great shame that these pre-historic looking animals lose their lives for something they don’t even need – their horns – which are used in traditional Asian medicine.

‘There’s no scientific proof that these medicines work, meaning these gentle giants are being slaughtered for absolutely no reason.

‘This stark fact makes the reason we work with this species so important. 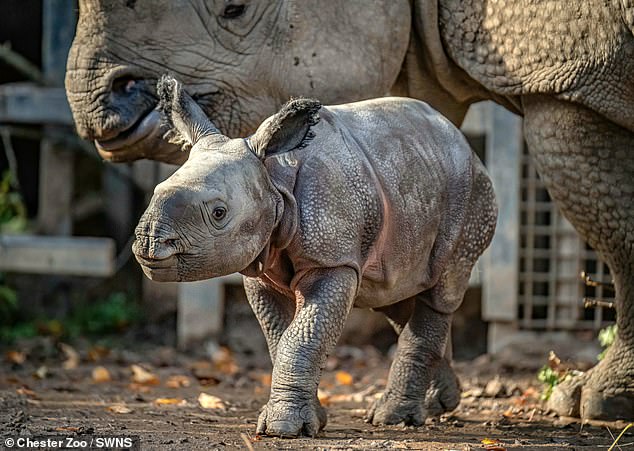 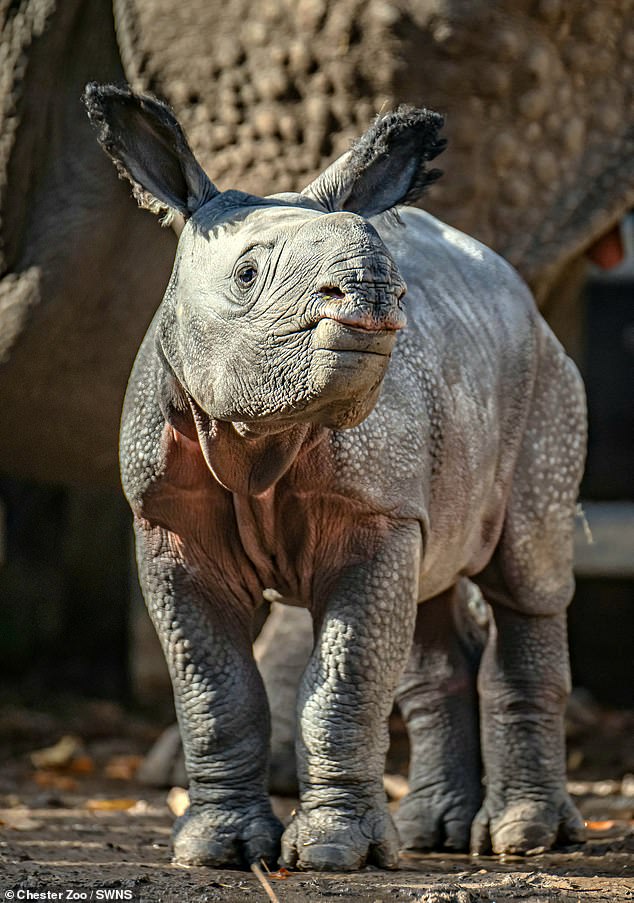 ‘Not everyone is lucky enough to see a rhino in the wild, but Asha, dad Beni, and their new calf help our two million visitors a year to connect with this magnificent species.

‘At one point, there were less than 200 in the wild so it’s a real privilege to be able to care for this new born.’

Asha’s pregnancy was tracked by the zoo’s onsite endocrinology lab, which monitors the hormones in dung samples to check how a pregnancy is progressing.

John O’Hanlon, laboratory technician at Chester Zoo, said: ‘We’re the only zoo in the UK to have an onsite endocrinology lab, which allows us to track an animal’s hormones and even its pregnancy.

‘Performing an ultrasound with an Indian rhino, and that amazingly thick skin isn’t easy, but by collecting and monitoring weekly samples of Asha’s dung, we’re able to track the pregnancy to see how mum and calf are doing.

‘Our lab work doesn’t stop there, it also tells us things like when different species come into season and when the right time would be to pair them with a mate.

‘We process hundreds of samples a day from zoos all around the UK and Europe, and working with partners in Kenya, we’re building on what we do here at Chester Zoo to support wild rhino populations.

‘It’s a wonderful feeling to know that you are contributing to preventing the extinction of so many precious species.’