‘I’ll knock you out with three punches’: Incredible moment no-nonsense cop, 51, threatens to bash a ‘wimp’ tradie with a ‘f*** the police’ tattoo on his leg

By Holly Hales and Brittany Chain For Daily Mail Australia

A police officer has been filmed threatening to bash a tradesman during a verbal altercation.

The incident lasted over two minutes, with the officer telling father-of-four John Ross he could ‘put him on his ass in three punches’.

‘The first two would be a jab and the third would be a hook,’ he said.

Mr Ross, from Moruya on the far south coast of New South Wales, was wearing a hi-vis shirt and claims to have just finished work for the day.

He told the officer on numerous occasions he was not interested in fighting.

Another man, who was holding the recording device, told the officer he ‘didn’t want to see a fight happen.’

The unnamed officer proceeded to say one day he would see Mr Ross around when he wasn’t in uniform.

‘I’ll see you around here. One night I won’t have a belt on and you can come up and tell me you’re real tough’.

‘I reckon you’re a wimp. I think you’re a piece of crap and a wimp,’ the officer then said.

The officer then pointed to a red Holden parked on the front lawn and demanded to know whether or not it belonged to Mr Ross.

Mr Ross confirmed the car was his, to which the officer said ‘yeah, great, I’ll see you then.’

When asked if he thought he could ‘have a crack’ with the officer, Mr Ross said he was sure he could take him on.

‘I reckon that little rats tail would just fall out of your hair,’ the officer said in response.

Mr Ross went on to say that he had plenty that he ‘could say’ back to the officer, but would refrain in order to avoid the officer pulling out any weapons.

He then proceeded to call the officer a c**t, and pointed out a tattoo on his leg with the phrase ‘f*ck the police’.

The officer was unimpressed with Mr Ross’ language and decided to part ways, abruptly ending the heated exchange.

The pair shook hands before going their separate ways. 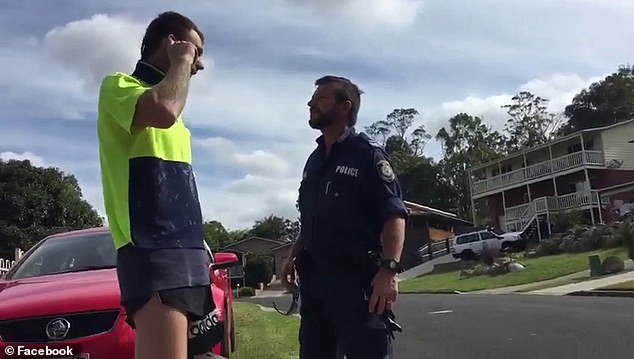 Mr Ross went on to say that he had plenty that he ‘could say’ back to the officer, but would refrain in order to avoid the officer pulling out any weapons

Mr Ross later claimed he was an innocent victim in the bizarre ordeal.

‘John Ross didn’t do anything. They were in our area looking for someone else and this is what happened,’ he wrote on a Facebook post.

‘The copper drove past saying how the girl cop in the car was crazy and trained to kill,’ he said.

‘John Ross just said he would put money on her too and this was his response. No wonder we have no time for them.’ 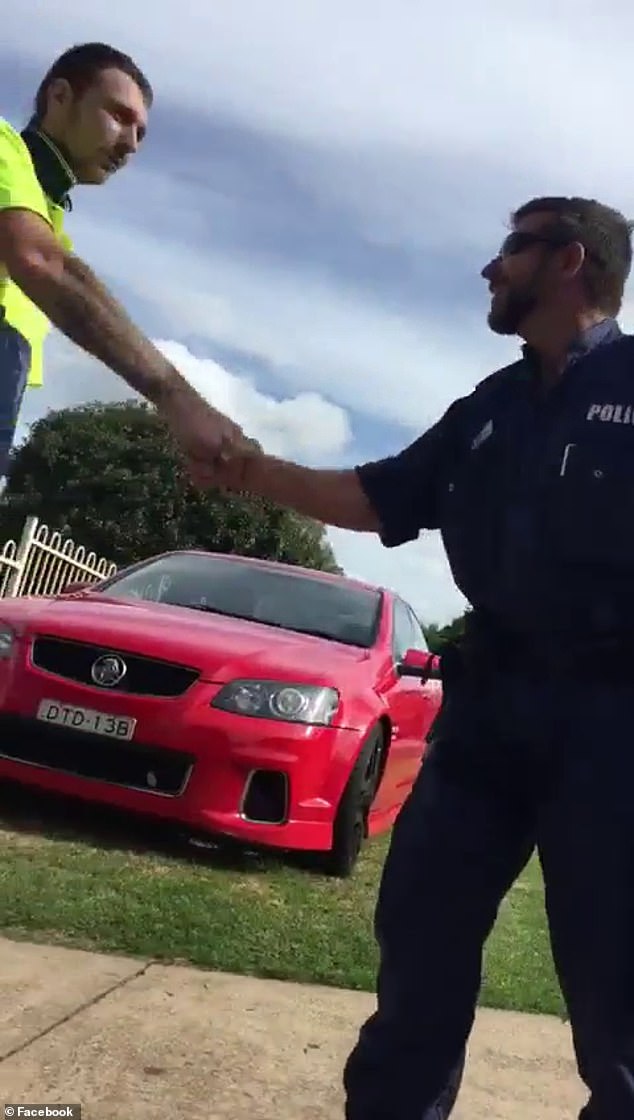 While the officer was unimpressed with Mr Ross’ language, he finished off the conversation and the pair shook hands before going their separate ways