Shocking footage shows the moment a suspected moped thief is rammed off his bike by police after a high speed chase through east London.

The dash-cam video shows a police car smashing into the motorbike in Victoria Park as officers carry out so called ‘tactical contact’ on a busy street.

The scenes, filmed for a Channel 5 documentary, show specially trained officers receive an emergency call to trace a red moped being driven by a man in a hi-vis vest.

Teams race to where he was last spotted, with footage showing the moped swerving around another vehicle up ahead.

Seconds later it attempts to manoeuvre around another police car, before it smashes into the bonnet and the rider is thrown to the ground. 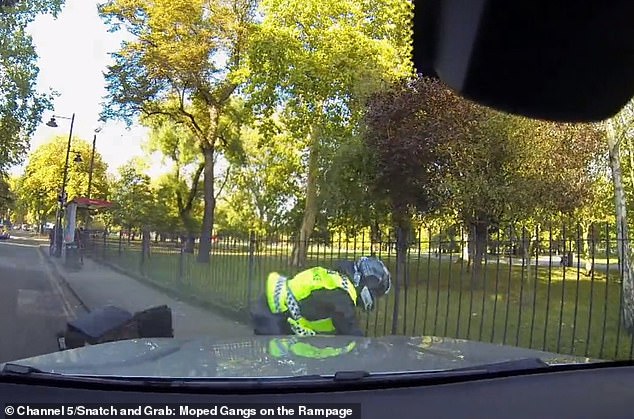 The moped suspect then smashes into the bonnet and the rider is thrown to the ground, before he is surrounded by officers

As the suspect attempts to flee an officer sprays him with a high tech ‘water pistol’ which are used to mark moped thugs with invisible liquid that can later be used to link them to a crime.

The aerosol cans drench culprits with forensically-tagged liquid called SelectaDNA, that stays on skin, clothes and vehicles for three months, and glows under UV light.

Several officers can then be seen grappling the suspect to the ground, before he is arrested. The rider doesn’t appear injured after the crash, and is treated by ambulance crews.

An officer tells the Channel 5 documentary Snatch and Grab: Moped Gangs on the Rampage, says: ‘The conclusion to the pursuit was brought about by tactical contact. 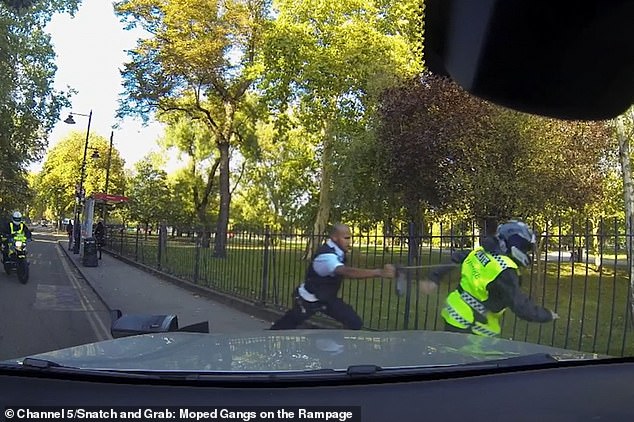 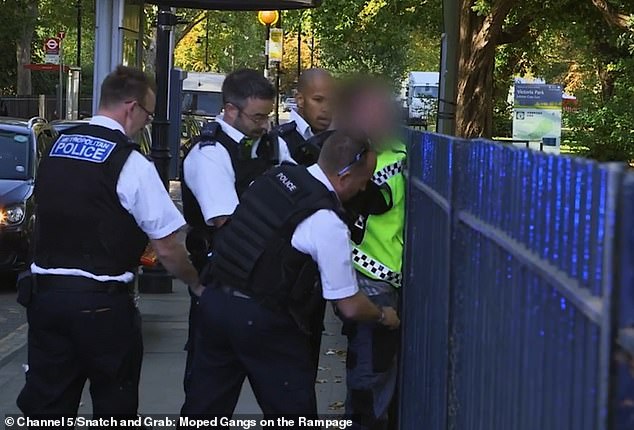 Several officers can then be seen grappling the suspect to the ground, before he is arrested. The rider doesn’t appear injured after the crash, and is treated by ambulance crews

‘That is one of the many strands of options we have to us.

‘In this case it was simply justified for the manner of riding, on a footpath, through a park, endangering peoples lives.

Police said guidance on the use of vehicles in stopping mopeds is similar to that surrounding the use of force by officers on foot.

Officers are told they can only use force when it is ‘absolutely necessary, reasonable and proportionate’.

Police car drivers have to keep this in mind when deciding whether to crash into a fleeing moped mugger.

Whereas police may have been more reluctant to chase robbers without helmets in previous years, the spike in moped crime has concentrated the minds of Scotland Yard chiefs.

More training for ‘scorpion’ drivers and the increasingly dangerous tactics used by muggers has led to the method being more widely used.

‘We can’t allow that to continue.

‘If we hadn’t have done this, what would he have done further down the road.’

The suspect was arrested on suspicion of five offences, failing to stop for police, suspected theft of a motor vehicle, possession of a class a drug with intent to supply, failing a roadside drug test and dangerous driving.

It is unclear if he was ever charged or convicted.

Another police officer tells the documentary: ‘We have no desire to knock them off and cause any injury to them.

‘However, that is a tactic that is available to us. If it is appropriate for us to use it, we will use it.’

The documentary also interviews members of the moped gangs committing crimes, and vigilantes who risk their lives to hunt the criminals.

The ‘tactical contact’ method used by the police to catch thieves sees police knocking crooks off their scooters or dumping them on the bonnets of police cars.

The Met has launched a special taskforce, Operation Venice, to crackdown on the scooter crimewave.

Last year the tactics were rolled out around the country after a seemingly-unstoppable crime wave gripped the capital, with scooter yobs grabbing people’s phones, watches and bags, smashing their way into jewellery shops and stabbing anyone who got in their way.

Some moped robbers hit 30 victims in one hour alone, with those coming out of tube stations seen as an easy target.

Police officers have also been injured by thieves riding directly into them.

Victims of the spate of incidents included ex chancellor of the Exchequer George Osborne and comedian Michael McIntyre, who was robbed of his Rolex by two men on a moped while parked outside his children’s school.

Scotland Yard was previously frustrated in catching the criminals, who often discarded their helmets to make officers think twice before chasing them.

Latest Met figures now show the number of thefts and snatches in London halved in the 12 months up to the end of March.

Last month a gang of moped thieves exposed by BGT judge Amanda Holden for threatening to snatch a toddler were jailed for a total of 68 years.

The 12-strong mob carried out a series of high-profile raids around the capital – even trying to steal TV cameras from bridges on the university boat race route – before making off on mopeds.

Ms Holden got involved after four gang members were caught on CCTV targeting her neighbour, Pheobe Ruele, as she walked her little son home from nursery last summer.

Bearded gang ringleader Terry Marsh, along with Steven Weller, John McFadyen and his brother Isaac, tried to rob Miss Reule in the middle of the road, demanding ‘give me your rings or I’m going to hurt your child’.

They were spotted by a group of builders who chased them off brandishing scaffold poles.

The gang were finally rounded up following another raid, after a 90-minutes chase through 10 London boroughs, which ended when one pair slid off their bike while trying to take a corner at high speed.

All four were jailed at Kingston Crown Court, along with six other members of the 12-strong gang who were also responsible for a string of high profile raids across London. Two were spared jail.

The gang were behind the theft of £170,000 of camera equipment used to film the Oxford and Cambridge boat race.

Nine of the 12 had racked up 383 previous convictions for burglaries, handling stolen goods, car theft, aggravated vehicle taking, assault and robberies between them.   The other three men had no previous criminal records.

Taking the criminals off the streets has helped cut moped crime in the capital by 52 per cent in a year, the Metropolitan Police claim.

Snatch and Grab: Moped Gangs on the Rampage in on Channel 5 tonight at 10pm.

Caught red (and blue and purple) handed: How a moped thug was caught after being sprayed

The Metropolitan Police began using invisible spray nearly two years ago as part of the blitz on scooter gangs.

Mohammad Khaleghi was sprayed with the substance as he rode his moped dangerously in Camden in May last year. 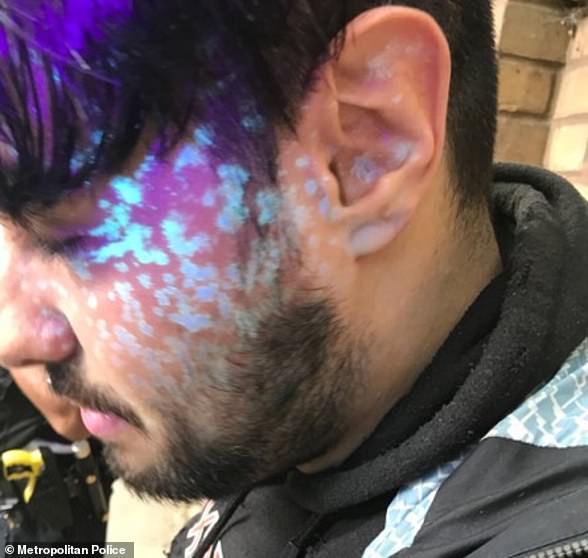 The spray is visible under UV light, even in daylight, and helps link criminals, such as Khaleghi, to their crimes

Chief Inspector Jim Corbett said: ‘12,000 officers have been trained so far. We are going to train everyone.