This is the bizarre moment a radio studio descended into chaos when two guests began fighting about Joseph Stalin.

The pair came to blows live on air after being invited to discuss the Soviet dictator by a Russian radio station in the capital Moscow.

A studio webcam caught how a physical altercation broke out while Nikolai Svanidze, 62, and Maksim Shevchenko, 51, discussed Stalin’s role in World War II. 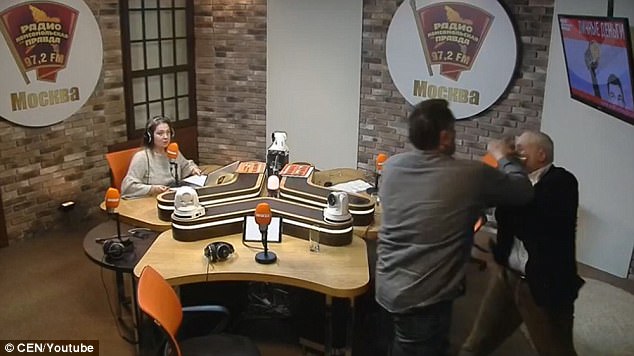 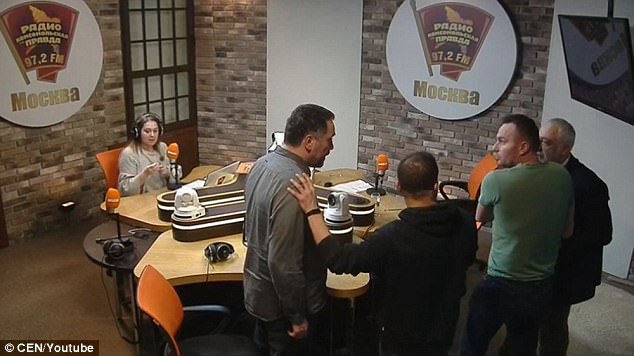 Mr Svanidze, a TV and radio presenter, said the communist leader was responsible for the terrible condition the Soviet Union was in by the end of the war.

Mr Shevchenko, a journalist, praised Stalin’s leadership of the USSR.

He contrasted the situation in the USSR with that of France during the same period.

Mr Shevchenko said: ‘Unlike France, the USSR did not kneel down to Germans. The Soviet Union was fighting.’

The discussion then turned personal, with the pair slinging insults at one another.

Mr Svanidze said: ‘If you had been closer I would have punched you in the face.’

Mr Shevchenko replied: ‘Please, go ahead, I am here! Punch me in the face. Get up and do it.’

Mr Svanidze got out of his chair and slapped him around the face before being punched twice by Mr Shevchenko.

The host of the Radio Rubka show on Komsomolskaya Pravda radio station can be seen desperately trying to restore calm in a video of the incident.

The video, posted on the station’s YouTube channel, shows how staff had to step in to separate the pair.