Incredible pictures show the world’s most fascinating railways, from Alaska to Wales via Peru

Railways stretch for more than a million kilometres (620,000 miles) around the world. And some of the track takes in some pretty jaw-dropping scenery – as these incredible pictures show.

They feature in new book Rail Journeys, by David Ross, which celebrates with 200 photos the most unusual, romantic and remarkable landscapes in the world that can be discovered by train.

Open its pages and you can gaze upon pictures of the world’s highest viaduct, in Argentina, a fascinating spiral bridge in Switzerland, a scenic railway that climbs the highest mountain in England and Wales and spectacular lines in North America that wind their way through the Rockies and Alaskan vistas.

David wrote: ‘There is always a sense of adventure when going on a rail journey. Whether it is aboard the Orient Express from London to Istanbul, or travelling the Rocky Mountaineer through the Canadian Rockies to the Pacific coast.’

Scroll down to steam through MailOnline Travel’s pick of the images from the tome, which serve as self-isolation eye-candy – and inspiration for post-lockdown adventures.

The Alaska Railroad’s Coastal Classic runs on the north shore of the Turnagain Arm waterway, which connects with the Gulf of Alaska and has the most massive tides in the U.S – sometimes hitting 40ft. The railroad is owned by the State of Alaska and is one of the few non-Amtrak lines to operate regular passenger services, the book says 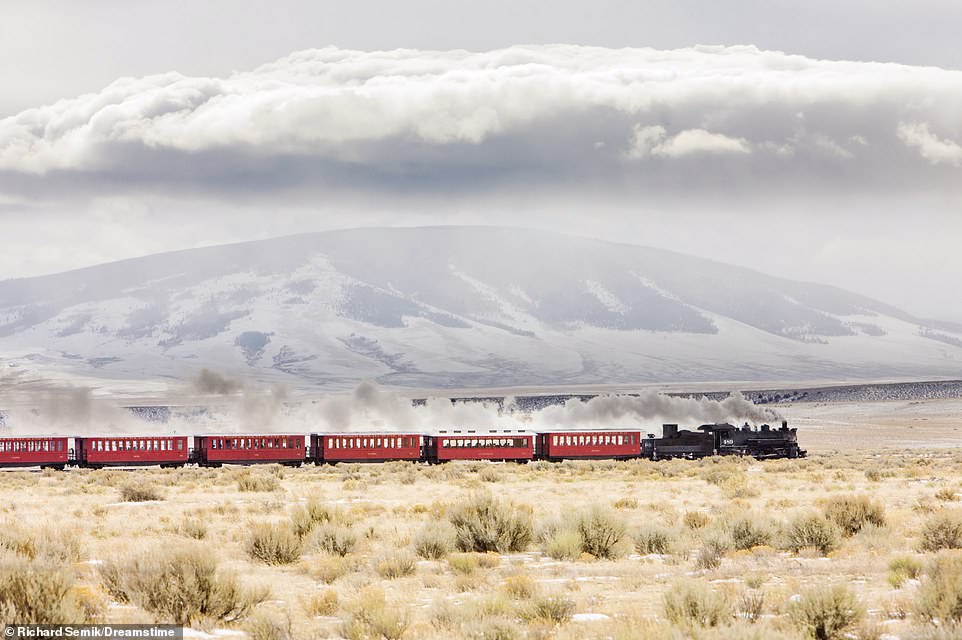 This is a 914mm (3ft) gauge railway linking Antonito, Colorado, and Chama, New Mexico. Originally constructed by the Denver & Rio Grande Western Railroad in 1881 to serve the mining industry, the book explains, it was reconstituted as a ‘heritage’ railway in 1970, operating its services with vintage steam locomotives like this Baldwin-built 2-8-2 from 1925 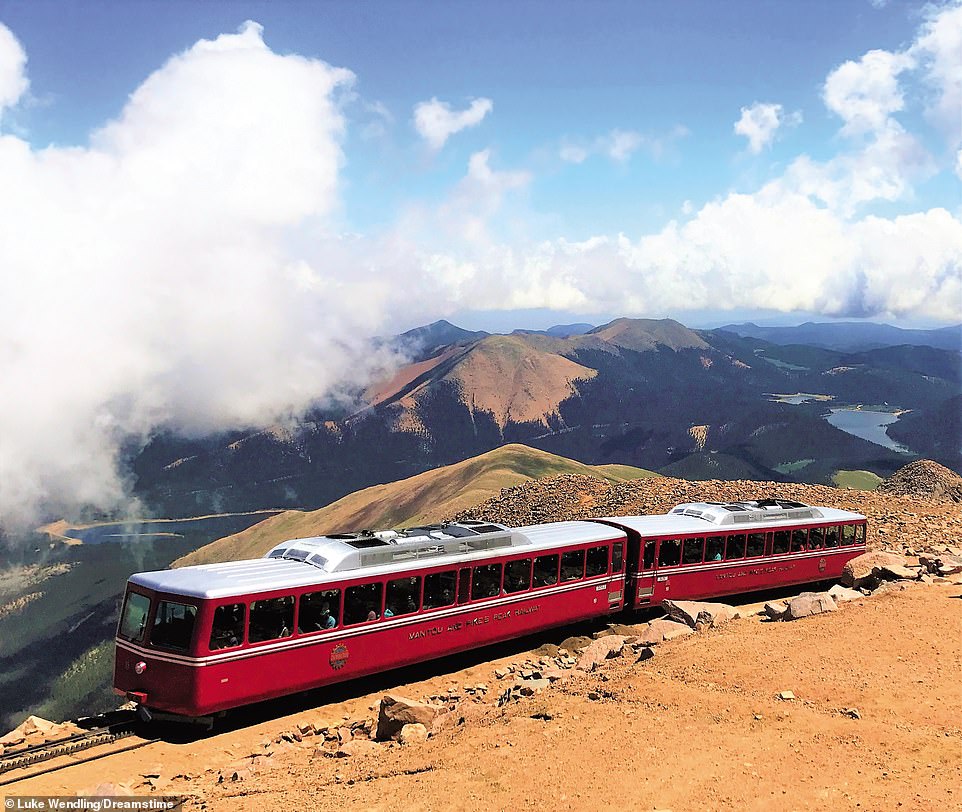 Locally known as The Cog, this is the highest railway in North America, the book says, reaching the 4,302m (14,115ft) summit of Pikes Peak. It opened in June 1891 using specially-designed locomotives and a central cogged rack to assist climbing and prevent runaways. Currently undergoing refurbishment, it will reopen in 2021 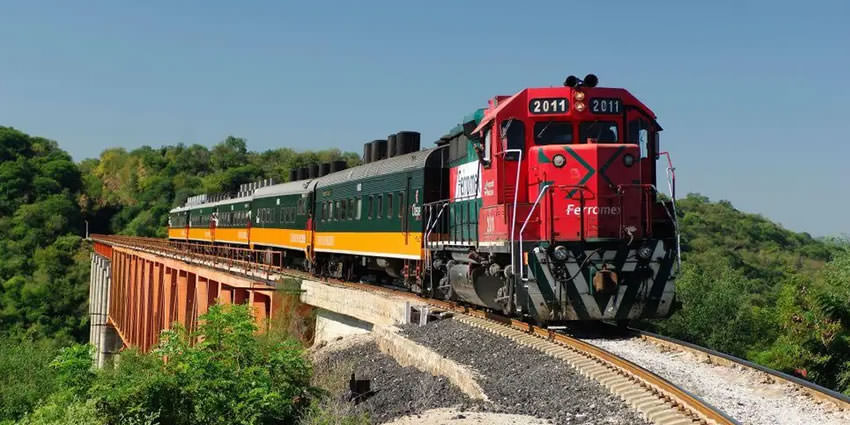 The Copper Canyon train construction was one of the great engineering works of the 19th century and the 20th century. The railroad was inaugurated on November 24, 1961 as the Chihuahua al Pacifico Railroad known today as El Chepe. Today the Pacific-North Railroad is better known as “El Chepe” has become a very important transport for commerce in Mexico but also one of the most wonderful train rides in the world. 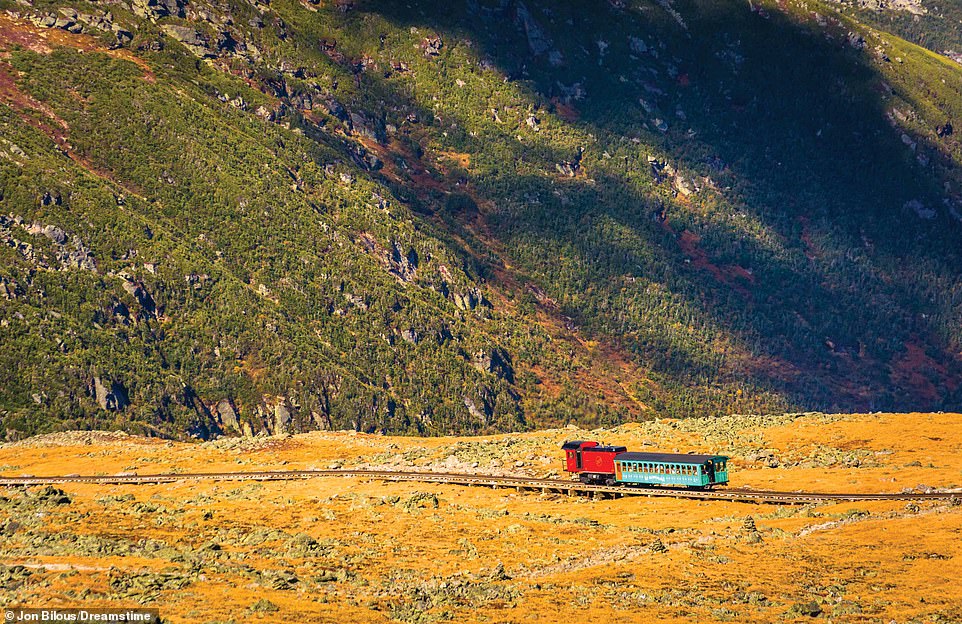 Opened in 1869, this cog railway climbs to the lofty 1,916m (6,288ft) summit of Mount Washington. Nowadays worked by biodiesel locomotives, it retains two veteran steam locos. The world’s first cog railway up a mountain, it is still among the steepest, with a maximum grade of 37.41 per cent. 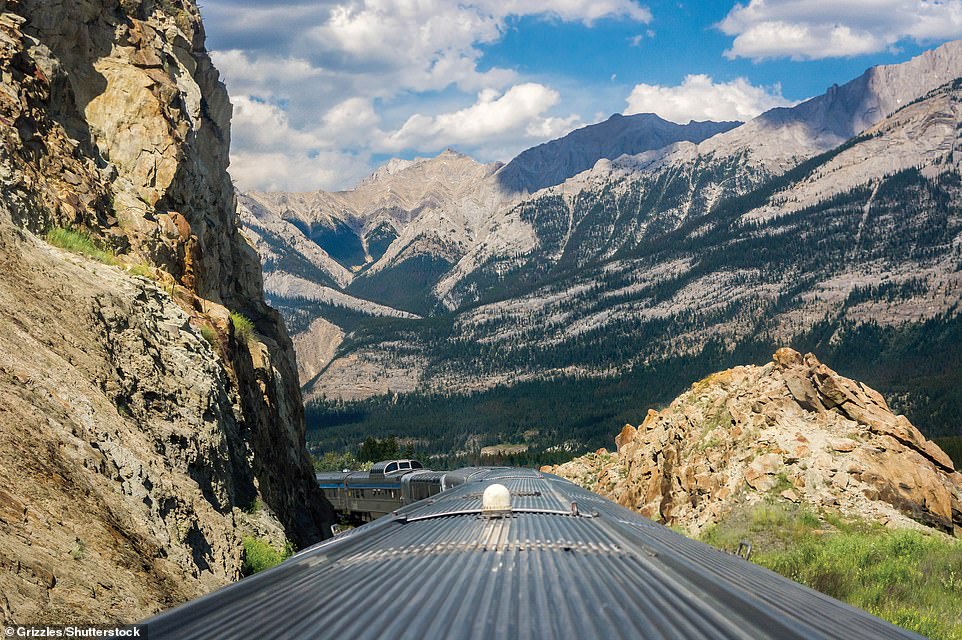 The ‘Canadian’ runs from Toronto via Jasper to Vancouver and here, stainless steel roofs and awesome mountains make the view from a vista dome car as it climbs a grade in the Rockies. The 4,466km (2,791-mile) journey involves four nights on the train 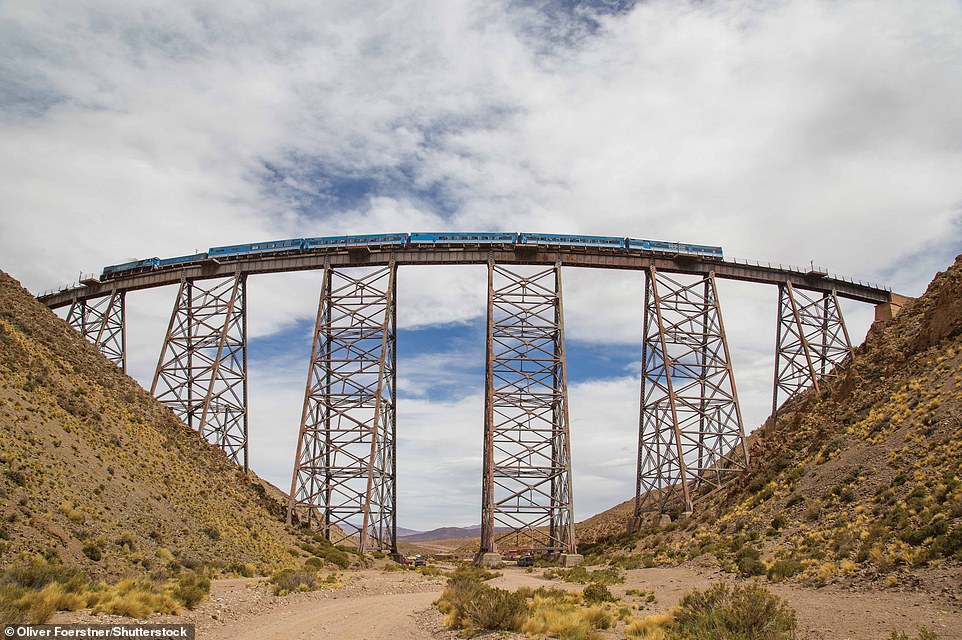 La Polvorilla Viaduct is the world’s highest. This curving structure stands 20.7m (70ft) high at an altitude of 4,182m (13,720ft) – the highest point on the route of Argentina’s ‘Train to the Clouds’ (Tren a las Nubes). The train carries oxygen cylinders and medical aid for cases of altitude sickness, the book reveals 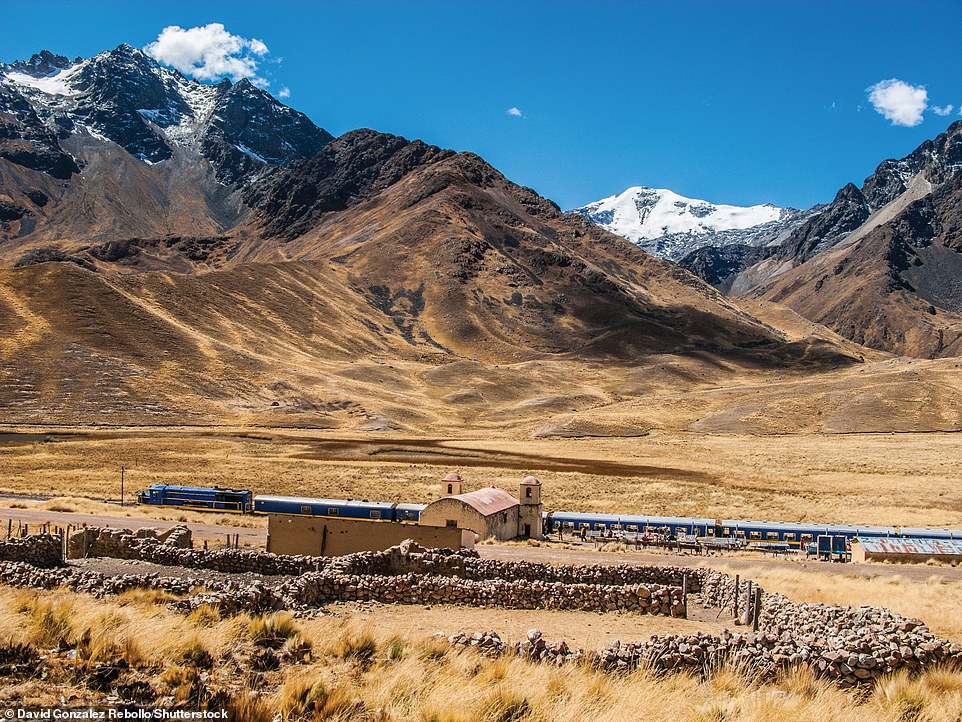 This incredible picture shows the Puno-Cuzco train pausing at Abra la Raya, the summit of the line at 4,350m (14,271ft), to enable tourists to take photographs of the jaw-dropping Andes vista and perhaps visit the local market. Streams on one side descend to the Amazon and on the other to landlocked Lake Titicaca, according to the book 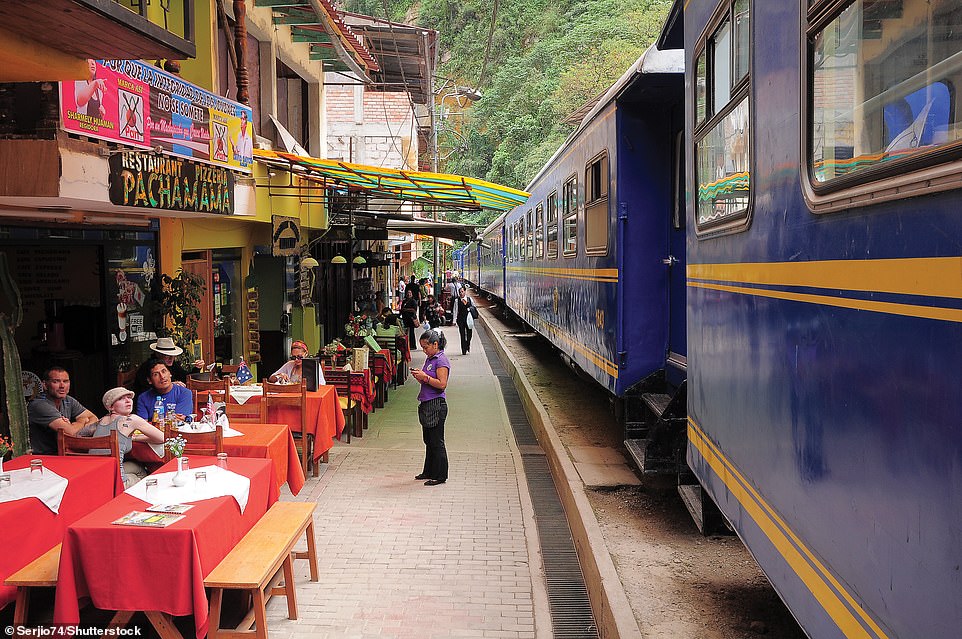 In Aguas Calientes, the main street is the railway line. This is where the trains bringing visitors to Machu Picchu terminate, though the line goes on beyond the village 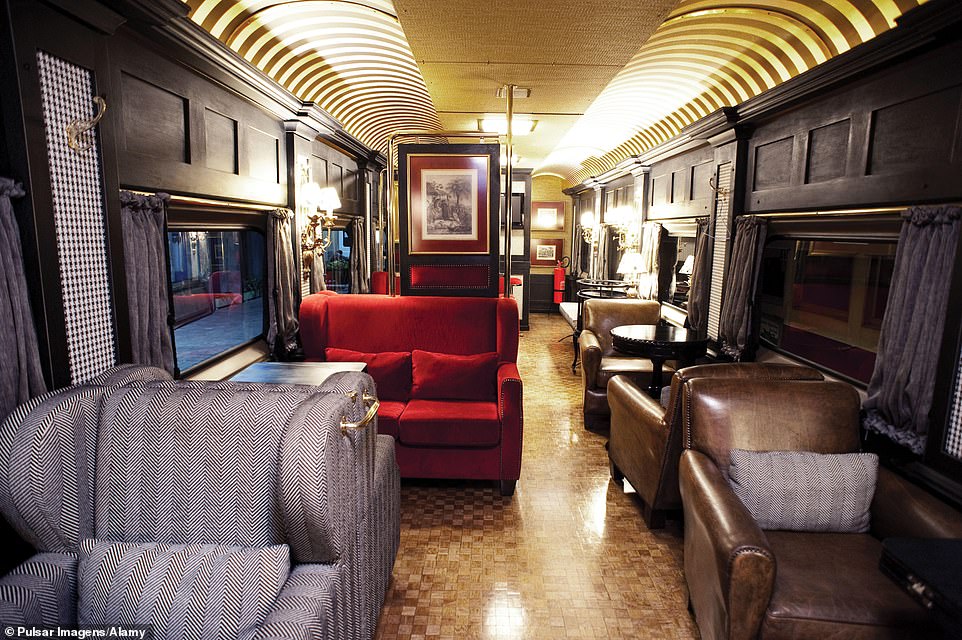 Expensive fabrics, plush leather, inlaid wood, wall lights and framed pictures give a classic ‘club-car’ atmosphere to this carriage on the Serra Verde express, the book says – a vivid contrast to the wild nature of the landscape traversed by the train 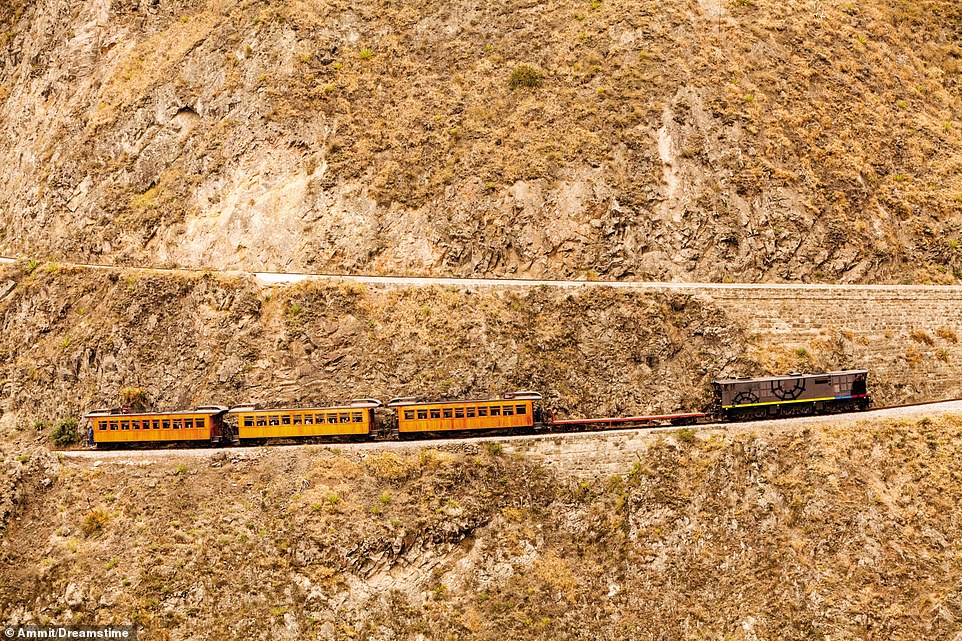 The ‘Devil’s Nose’ is a double switchback on the Guayaquil & Quito Railway, where the train reverses direction twice in order to gain height on a precipitous slope, the book says. Special runs to negotiate this spectacular feature are made from Alausí station

Built to provide a direct connection between the Midlands and Scotland, the railway between Settle and Carlisle crosses some of the wildest parts of England, and is popular for steam excursions. The Ribblehead Viaduct (pictured), completed in 1874, is the longest on the line at 400 metres (1,312ft) 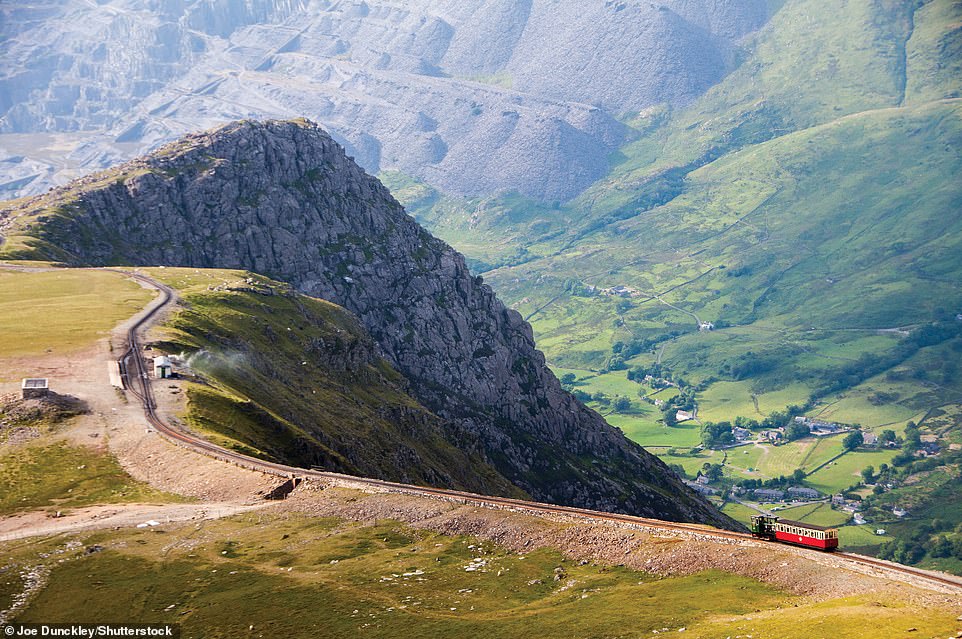 Since 1896, trains have trundled up and down Snowdon, the highest mountain in England and Wales (1,085m/3,560ft) on this rack-and-pinion operated railway. Both steam and diesel traction are used. This view shows a train climbing upwards beyond one of the crossing loops on the line 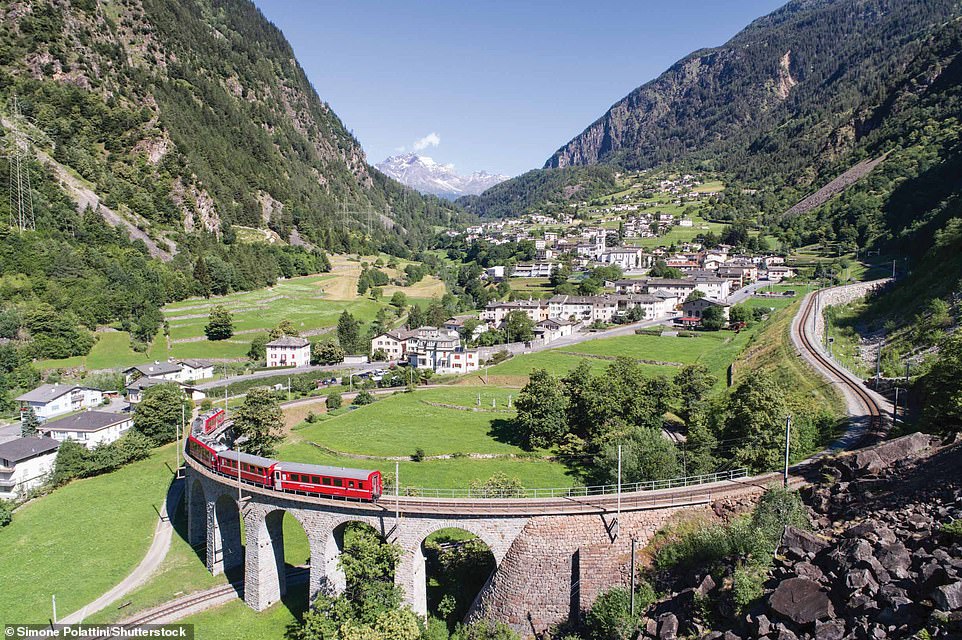 Winding its way down from St Moritz into Valposchiavo, the Bernina Express from Chur, Switzerland, to Tirano in Italy runs on the highest transalpine railway, reaching an altitude of 2,253m (7,392ft). The spectacular 122km (76-mile) ride on the metre-gauge line takes four hours. Pictured is a train negotiating one of the most fascinating features on the line – the amazing 360ft-long Brusio spiral viaduct in Brusio, Switzerland 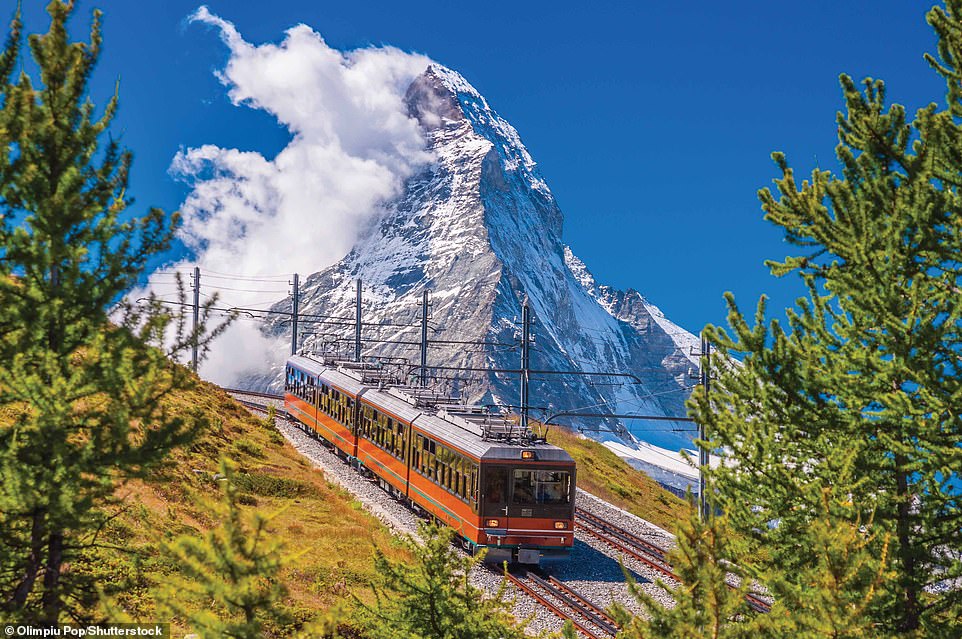 Breathtaking views of the Matterhorn are had from the train on the 33-minute journey between Zermatt and the Gornergrat terminus at 3,089m (10,134ft). This was the world’s first fully electric rack railway, using the Abt cog-wheel system, when it opened in 1898 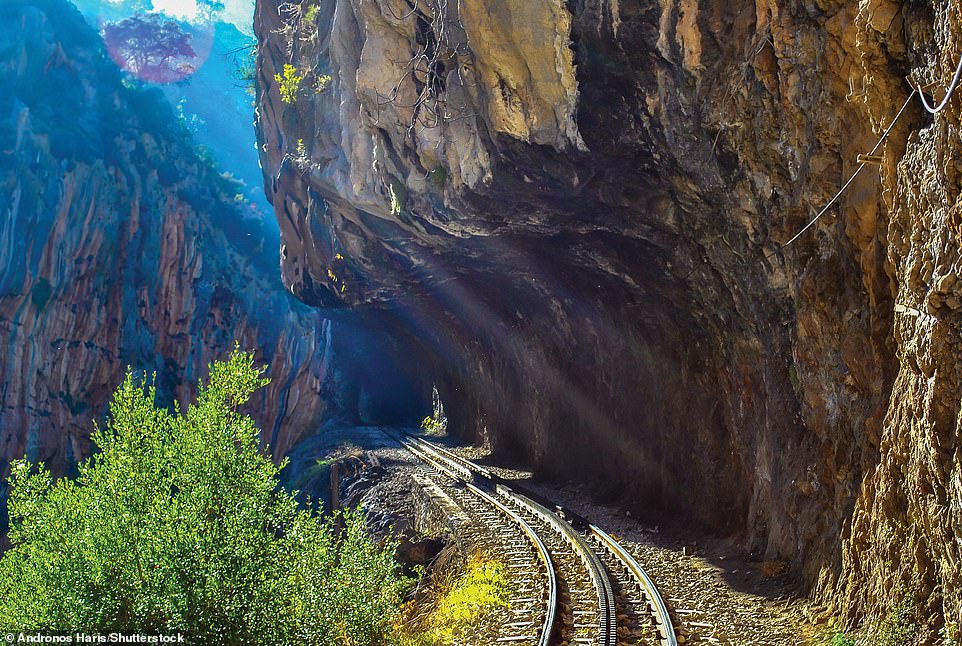 ‘Odontotos’ means toothed: a reference to the central rail of this rack and pinion railway, a 750mm (29.5in) gauge line through the Vouraikos Gorge and up to Kalavrita. Three rack sections help the train on the steepest grades. Opened in 1891 and first worked by steam, it is now operated with diesel-electric railcars 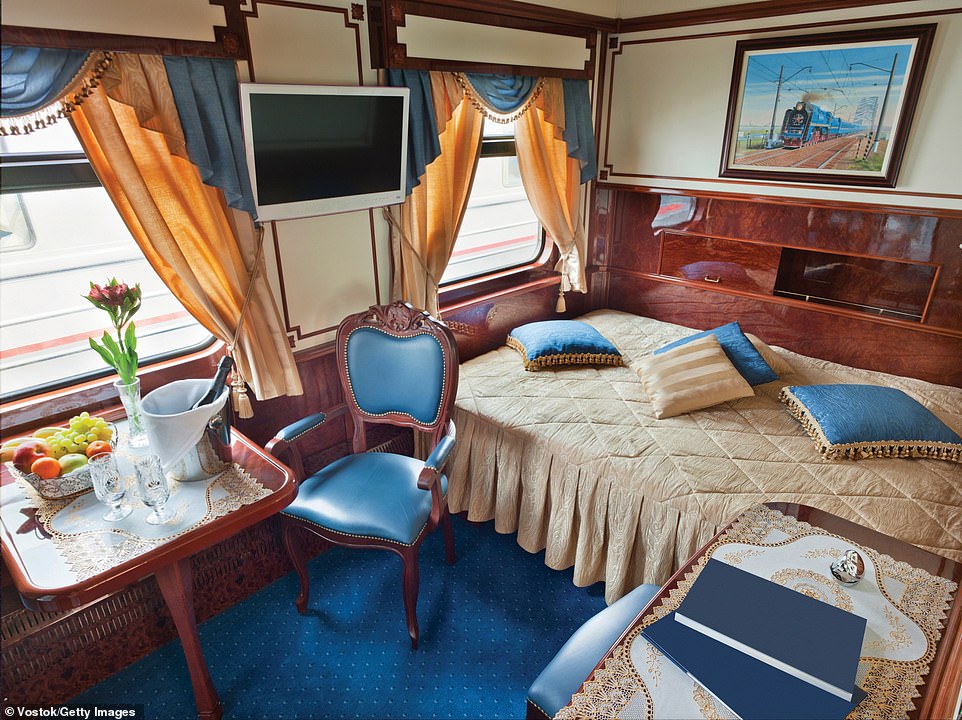 A bedroom set up as a day room on the luxury version of the Trans-Siberian, which operates on the line between Moscow and Vladivostok – the longest in the world at 9,289 kilometres (5,771 miles) 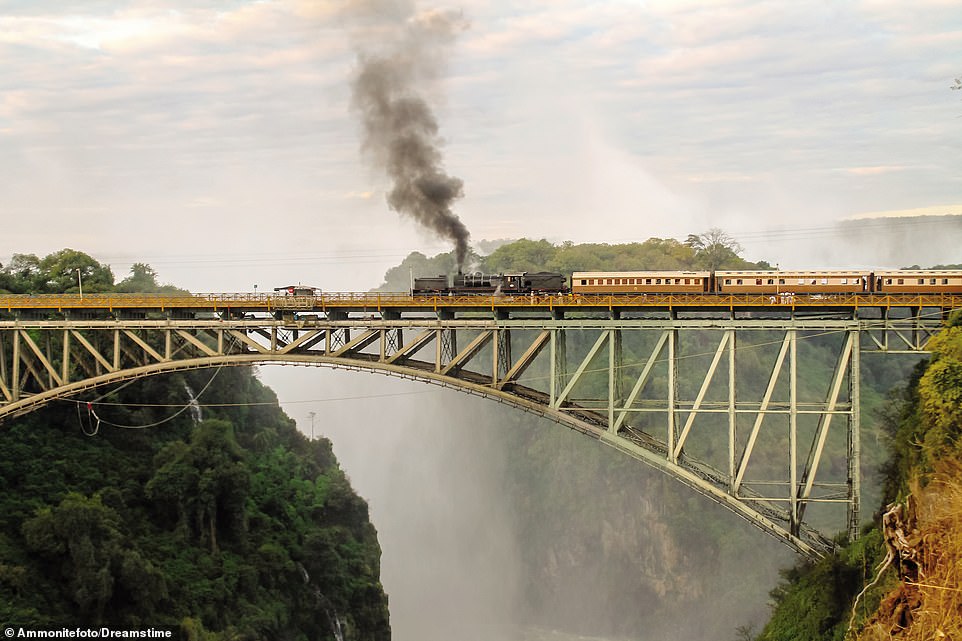 Spanning the Zambesi River just below the Victoria Falls, this bridge has been a spectacular viewpoint since 1905. Built in England and shipped to Africa in parts, the book explains, it was intended to be a vital link in the railway linking Cape Town to Cairo. A vintage train headed by ex-Zimbabwe Railways Garratt locomotive No. 512 stands on the bridge in this picture 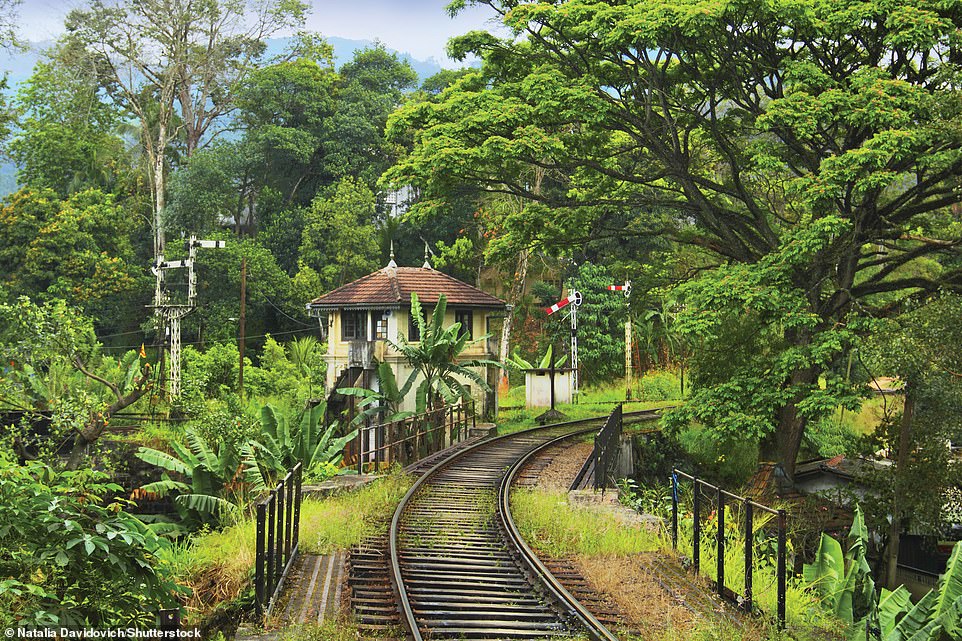 Classic British-type signal posts and signal cabin at a junction on the Kandy–Badulla Line in Sri Lanka. Passing through lush rainforest country, the route is one of many which claim to be the ‘world’s most scenic railway’ 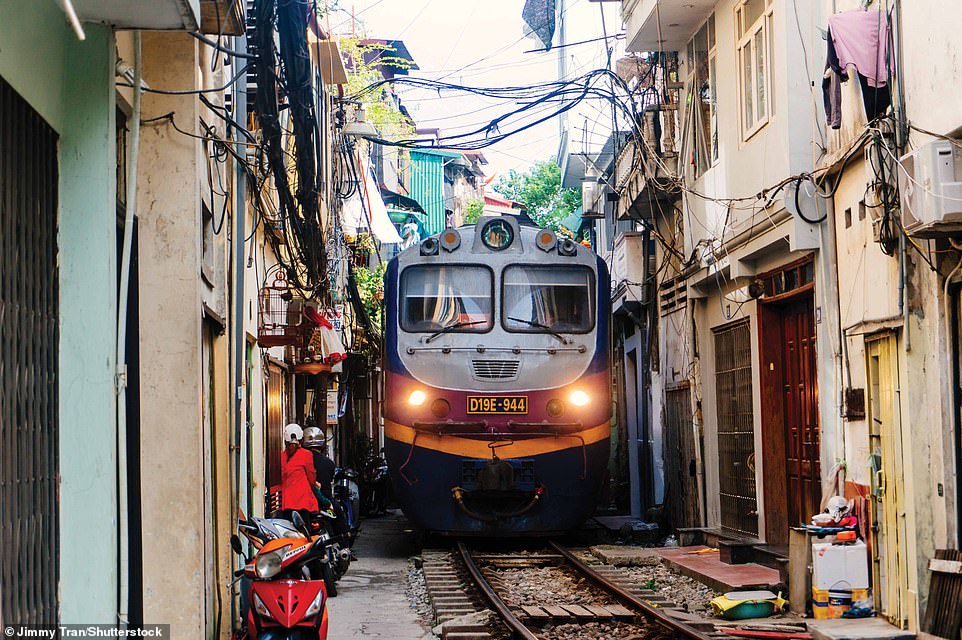 Known to visitors as ‘Train Street’, this thoroughfare in Hanoi’s Old Quarter sees a long-distance train squeeze past twice daily. It is the train from Hanoi to Ho Chi Minh City, running 1,600km (990 miles) on the single metre-gauge track between the two cities 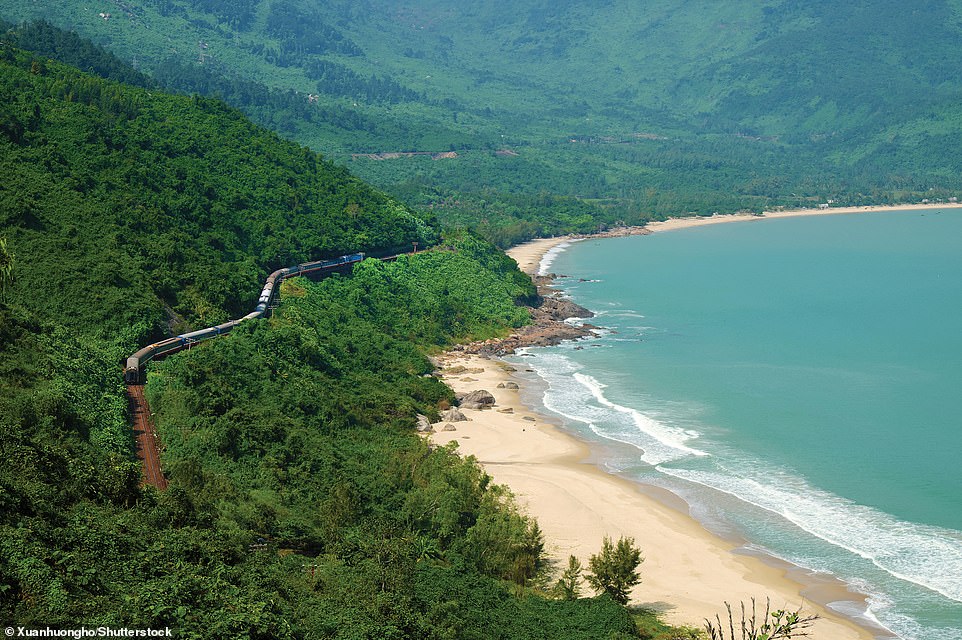 Between the Annamite Mountains and the sea, a northbound train from Danang to Hue runs above Lang Co Beach on its way towards the Hai Van Pass through the mountains. The journey takes around three hours 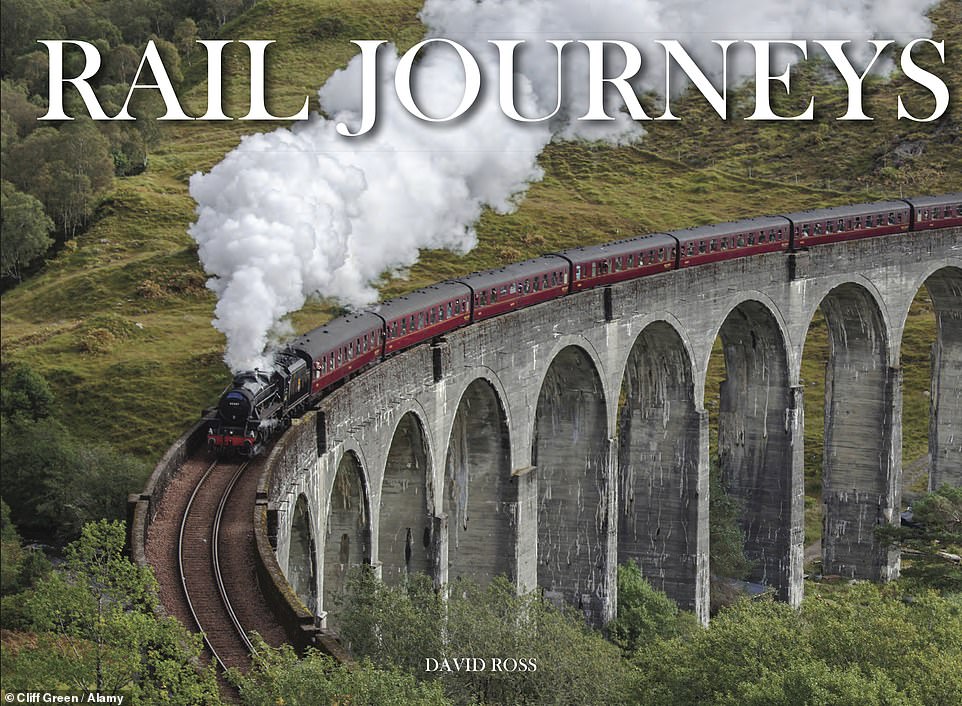 All images are taken from the book Rail Journeys by David Ross (ISBN 978-1-78274-919-6) published by Amber Books and available from bookshops and online booksellers (RRP £19.99)