Incredible transformation of a filmmaker, 28, who ate NOTHING last Christmas

A man ate nothing over Christmas Day as part of a controversial diet to help him get the ripped body he has always dreamed of.

Phil Flock, 28, set himself a two-month target to get in shape at the end of last year after his hectic career as a filmmaker left him without the time to work out.

After cutting out all carbs, Mr Flock, who is originally from Haan, Germany and now lives in California, made an unintended slip up at Christmas party on December 23 when he drank a sugary ice tea, thinking it was diet.

This mishap plunged Mr Flock into carb withdrawals that led him to make the drastic decision to start fasting on Christmas Eve and consume nothing but a drink on December 25 evening.

Mr Flock, who lifts weights every day, now follows the so-called ‘snake diet’. This involves him fasting for up to eight days at a time, with just water to fuel his body.

Phil Flock embarked on the controversial snake diet that saw him eat nothing over Christmas to help him get the ripped body he always dreamed of. Pictured left on day one, Mr Flock claims he saw the effects almost immediately and his physique was transformed by day 121 (right)

The snake diet encourages followers to consume nothing but ‘snake juice’ within just a one-to-two hour window for up to three days at a time.

The controversial drink is made up of water, salt, potassium chloride, baking soda and magnesium sulphate salts. Followers claim this helps to deplete sugar levels in the liver, which then encourages the body to burn fat as energy.

Although they allege it can reverse type 2 diabetes and even clear up acne, critics warn the drastic diet may be extremely dangerous.

Experts claim fasting for up to 72 hours is unhealthy and will result in dieters putting weight back on as soon as they start eating normally.

Mr Flock decided it was time for a drastic change after his weight slowly started to creep up over eight years.

‘During school I was a sports trainer and a physical education teacher,’ he said. ‘But later in time I had to decide what I wanted to do with the rest of my life, so eventually I switched to my other favourite interest in life which was filmmaking.

‘Eventually I quit my job and started to work on my career as a filmmaker. So, for the past eight years I was focusing on my job and I totally ignored my fitness.

‘By the end of 2017, I realised I needed to bring my personal life and my professional life in balance to improve my fitness.’ 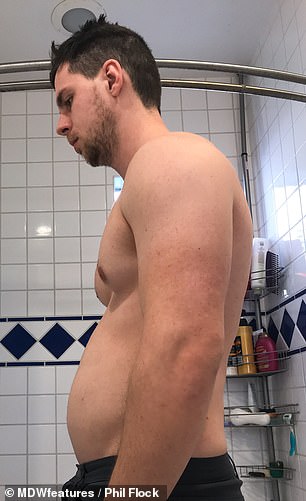 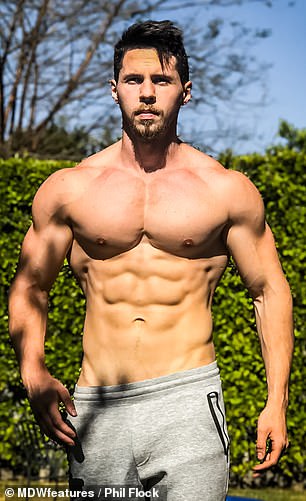 Pictured left before starting the diet, Mr Flock blames his hectic job as a filmmaker for him not having the time to work out. Since cutting out all carbs and going eight days without eating, Mr Flock is in better shape than ever (seen right) and claims his body has been ‘cured’ of illness

Mr Flock, along with some of his friends, set himself an eight-week target to shape up, which was going well until the mishap on December 23.

‘It was very hard for all of us but after a couple of weeks we got used to it because the carb withdrawals eventually stopped and we had great results within weeks,’ he said.

‘The withdrawals which make you want to vomit all the time are the hardest part when you cut carbs.’ Mr Flock even compares carbs to ‘an addictive drug’.

With the December 23 incident triggering carb withdrawals, Mr Flock discovered the snake diet, which involves fasting for prolonged periods of time and existing on just one meal every few days.

‘The carb withdrawals started again the next morning, so I researched how I could get back into ketosis faster,’ he said. ‘Ketosis is the process when the body uses ketones out of fat for energy, instead of carbs.

‘That’s when I discovered fasting and the snake diet. I learned that if I fasted for 36 hours, I would be back into ketosis and then I could just continue with my no carb diet, so I did.’

Mr Flock set himself a two-month target to get in shape (pictured left before starting the drastic diet). After accidentally having a sugary drink on December 23 last year, he decided to consume nothing but a drink on December 25, which he credits for his abs (seen right) 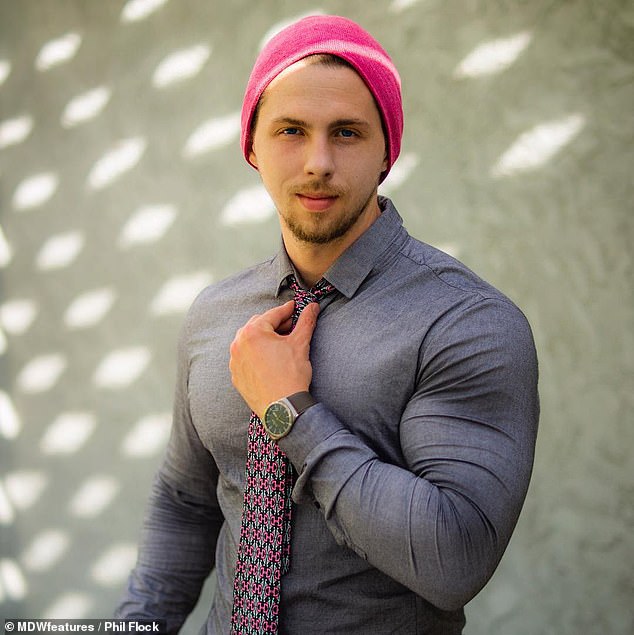 Mr Flock (pictured after embarking on the snake diet) believes society is ‘addicted’ to carbs and experiences withdrawals in the same way as someone with a drug dependency. Since cutting them out, he claims his blood pressure has regulated and his ‘inflammation’ reduced

WHAT IS THE SNAKE DIET? AND IS IT DANGEROUS?

The snake diet encourages followers to consume nothing but ‘snake juice’ for prolonged periods of time.

Followers allege this kick starts the liver to break down sugar stored in the organ, which then enables fat elsewhere in the body to be used for energy.

The diet encourages people to drink snake juice within a one-to-two hour window for ‘as long as you feel good’, recommending they start with a 48-hour fast and then repeat with a 72-hour one.

Its website claims everyone can benefit from the diet, adding it is ‘like pushing the reset button at the cellular level’.

But critics argue there is is no evidence fasting for such prolonged periods of time is safe, with followers only gaining weight once they start eating as normal again.

Registered dietitian Julie Upton told Women’s Health: ‘I would not recommend it to anyone for even a short-term trial, as it is not based on any clear evidence nor does it have any clinical evidence that is peer-reviewed to support the programme’.

She even described the idea of cleaning sugar out of the liver as ‘100 per cent BS’, adding that the organ’s role is to process toxins.

Keen to get back into a state of ketosis as quickly as possible, Mr Flock’s willpower got him through the festive season without indulging in any seasonal treats.

‘I spent two Christmas dinners without food, so I could get back into ketosis as fast as possible, and they were the hardest days ever, but I made it,’ he said.

‘It was really hard to not eat anything all day and sit at the table, seeing all of the delicious food, knowing I had to wait 24 hours until I could eat again.

Eager to achieve imminent results, Mr Flock fasted for 36 hours and carried on with the controversial diet when the festive season ended.

‘I continued doing research on fasting and I learned that it has so many other benefits rather than just fat loss, so I started having one meal a day until the end of the eight-weeks of not eating carbohydrates,’ he said.

‘When the results started showing and I had a six pack, I felt great and was full of energy. So, I extended my fasts to 48 hours without food.

‘The longest I’ve fasted for was eight days where I only drank water, which had sodium and potassium.

‘I am pretty lean right now, so I have one small no carb meal a day, unless the meal becomes bigger than I intended so then I fast for 48 hours to maintain my body weight.

‘Through fasting I have regulated my blood pressure, cleared my skin of acne, cured my body from inflammation and my joints no longer hurt. I don’t drink coffee anymore, but my mind is still boosted all the time.’

Mr Flock even cuts out water to achieve his ripped physique.

‘Once a week I like to do a 48-hour dry fast where I don’t have water and my longest dry fast was 80 hours,’ he said.

Mr Flock exercises every day and can manage seven pull ups with just one arm. The length of his workouts reduces as his stage of a particular fast progresses.

He added: ‘Losing weight is no rocket science but people like to overthink everything. If a lazy guy like me can do it, anybody can.’ 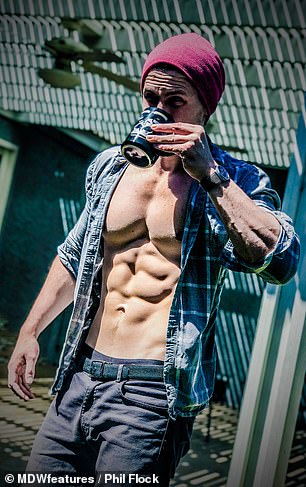 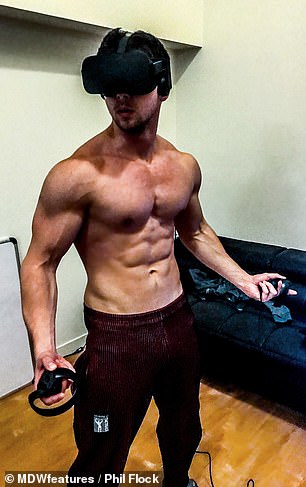 Mr Flock loves his six-pack and has just a nine per cent body fat. He now goes more than a week without food at a time and even does not drink water for up to 40 hours. Mr Flock wants to encourage people that losing weight ‘isn’t rocket science’ and ‘anyone can do it’