Incredible transformation of a woman, 21, who underwent four surgeries for her cleft lip

Incredible pictures document the transformation of a woman who underwent four surgeries for her cleft lip after being tormented by bullies.

Lauren Cross, 21, from Pontefract, West Yorkshire, was born with a cleft lip and palate, and underwent her first operation at just three months old.

While at school, cruel bullies would call her ‘scar face’, with one even messaging her the day before her surgery sarcastically saying they hoped she didn’t die during the operation.

After enduring a bone graft from her hip to build her gums and a ‘nose job’ to help open up her nostrils in 2015, Miss Cross should never have to go under the knife again.

Lauren Cross claims she overcame her condition by surrounding herself with ‘positive vibes’. She even found being discharged bitter-sweet due to the friendships she made in hospital 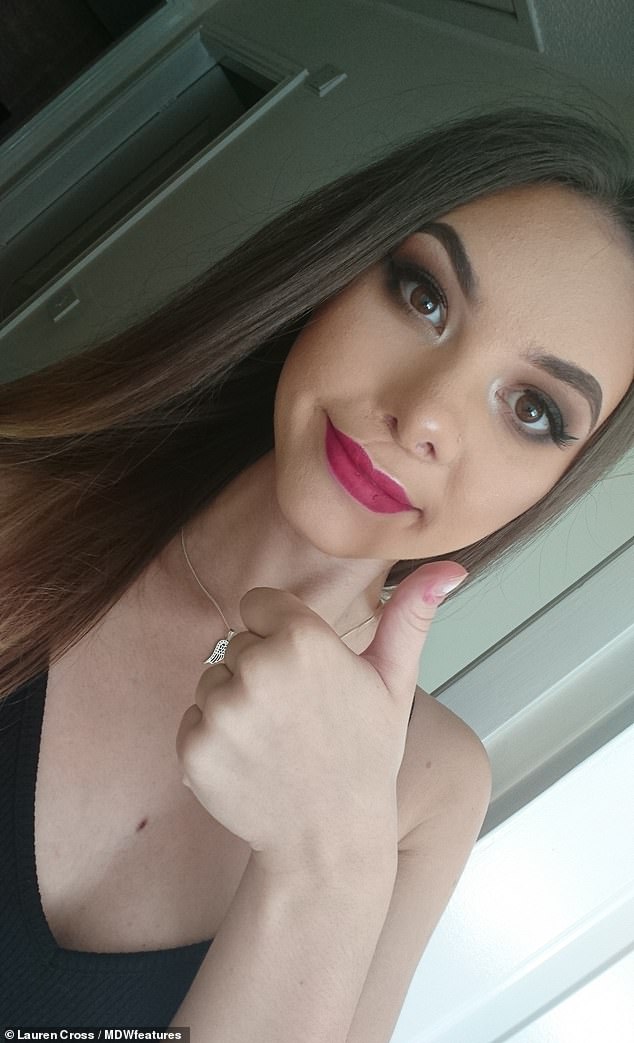 Lauren Cross has undergone a remarkable transformation after having four surgeries to correct her cleft lip and palate. Pictured at 21, Miss Cross had her final operation at 17. Before the procedure, a cruel bully sarcastically said they hoped she didn’t die while under the knife 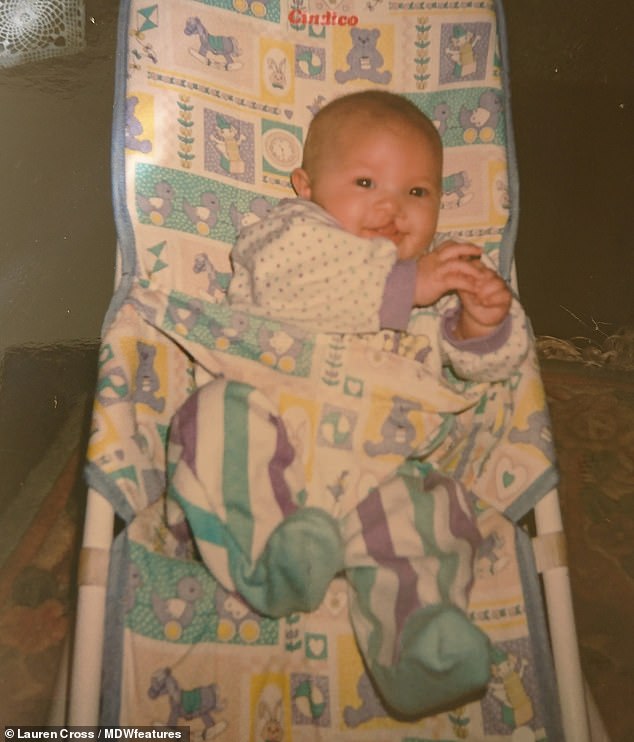 After being born with a cleft lip and palate, Miss Cross had her first surgery at three months old 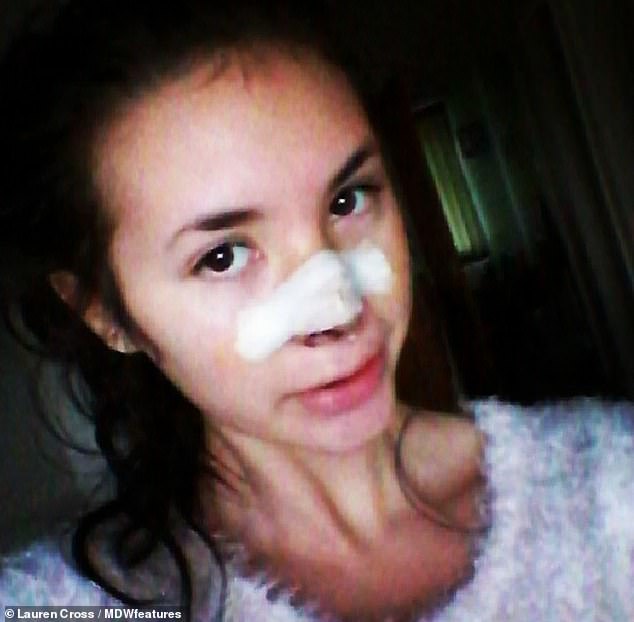 At 17, Miss Cross had a rhinoplasty to open up her nostrils and make breathing easier. Pictured during her recovery, she was initially reluctant due to how it would change her appearance

The radiographer assistant is speaking out to encourage other cleft sufferers to embrace their appearance.

‘Never be ashamed of who you are, your scars are a part of you – be proud of them. And remember, you’re never alone,’ she said.

Miss Cross was forced to go under the knife again at just three years old, before having a bone graft to her gums from her hip bone when she was 10.

She had her final operation, to reconstruct her nose, at 17.

‘I must admit it wasn’t always easy – particularly the operations, countless hospital check-ups and having to wear braces for a long four years as part of my treatment,’ Miss Cross said.

WHAT IS A CLEFT LIP AND PALATE?

A cleft lip or palate occurs when the parts of a baby’s face do not join properly during its development in the womb.

Around 1,200 babies are born with the condition every year in the UK.

It affects approximately 4,440 annually in the US.

Cleft lips can range from a small notch in part of the lip to complete separation of the upper lip up to the nose.

This can also affect the gums where the teeth come from.

A cleft palate is a gap in the roof of the mouth.

If it affects the back of the palate towards the throat, it is called a soft palate.

A hard palate affects the front of the palate towards the lips.

Some babies with the condition may have smaller lower jaws, as well as possible breathing difficulties.

It is unclear exactly what causes a baby to develop a cleft lip or palate.

But it is thought to be a combination of genetic and environmental factors, such as taking certain medicines during pregnancy.

Surgery is needed to close the gap left by the cleft, which usually takes place when the baby is under one-year-old.

Treatment may also be required to aid speech, teeth growth and hearing.

‘The worst part was having to have time off school, as I hated missing out and not seeing my friends.’

Miss Cross also struggled to pursue her passion of swimming as a result of the painful ear infections her cleft palate would often leave her battling.

Although she had a lot of supportive friends growing up, going to secondary school was difficult.

‘I got the impression people would talk about it behind my back so I couldn’t stick up for myself and I received anonymous messages on social media,’ she said.

‘I remember a message on the day of my prom calling me scar face and saying that they hoped I didn’t die when I had my next operation in a sarcastic way.

‘I remember telling myself they’re just cowards for not letting me know who they are in the first place.

‘At high school and sixth form, I only had issues with older boys who I didn’t know who would tease me and try to embarrass me.

‘Back when I was in year seven, when one older boy shouted something about my nose, I actually chased him around the school and tried to find out his name and told the teacher.’

Miss Cross also worried she may be defined by her condition.

‘As a 13 and 14-year-old teenager it bothered me as I was worried that it would give people a false first impression of myself,’ she said.

‘For example, I didn’t want people to just see my as, “the girl with the cleft”, but just for who I am and my personality. 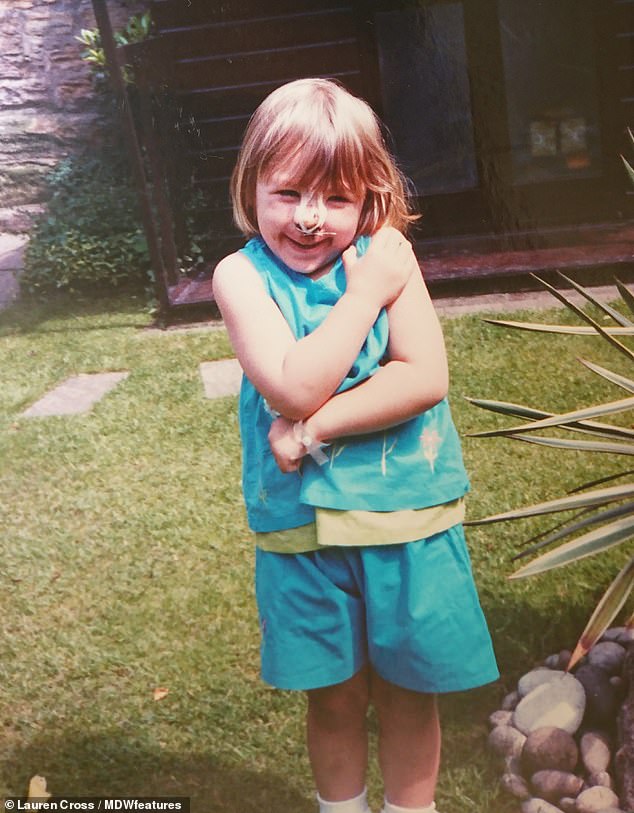 Pictured after her second surgery at three years old, Miss Cross was forced to go under the knife again at 10 to take a bone graft from her hip to her gums to help her teeth grow properly 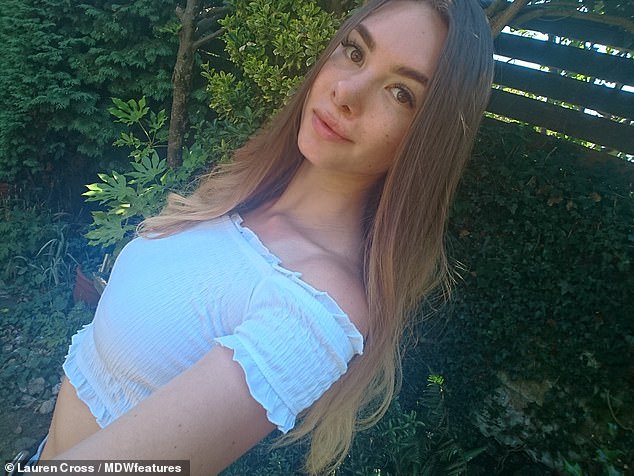 Pictured at 21, Miss Cross hopes to be an example to other sufferers on how to overcome the condition and embrace their uniqueness. She is not due to have any more surgeries 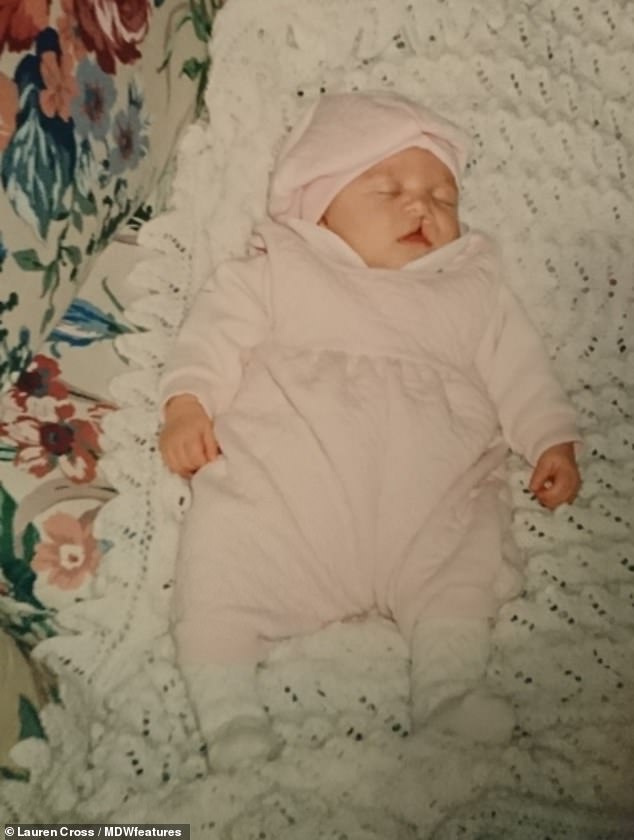 Pictured as a baby, Miss Cross does not remember her first two surgeries but knows they were a success. This meant she did not need any procedures between three and 10 years old

Due to the success of her surgery as a toddler, Miss Cross was able to go seven years before her next operation.

‘The biggest and most traumatic operation for me was my bone graft,’ she said.

‘This entails taking a piece of my hip bone and putting it in the gum where my cleft was to close the gap. That way, it would allow teeth to grow.

‘However, it only partiality worked, one tooth grew, but I still had a big gap.

‘I also got an infection, and became ill, so I had to stay in hospital an extra two weeks.

‘It was a lot to go through at that age, so I didn’t want to have it done again. I had a false tooth put in a few years later and I still have it to this day almost ten years later.’

Due to the first three surgeries taking place while Miss Cross was a child, she remembers the rhinoplasty most vividly.

‘I questioned whether I wanted rhinoplasty as it would change my nose slightly,’ she said.

‘However, I knew that it would also benefit my breathing, as it would help open up my nostril.

‘I woke up with “packs” in each nostril and a splint held over my nose with tape. I had two weeks off college to recover.

‘The most scary part was when I almost sneezed shortly after my surgery!

‘I would sit and hold my breath, and grip on to things just so the sensation would ago away. Luckily it did and I was so relieved.’ 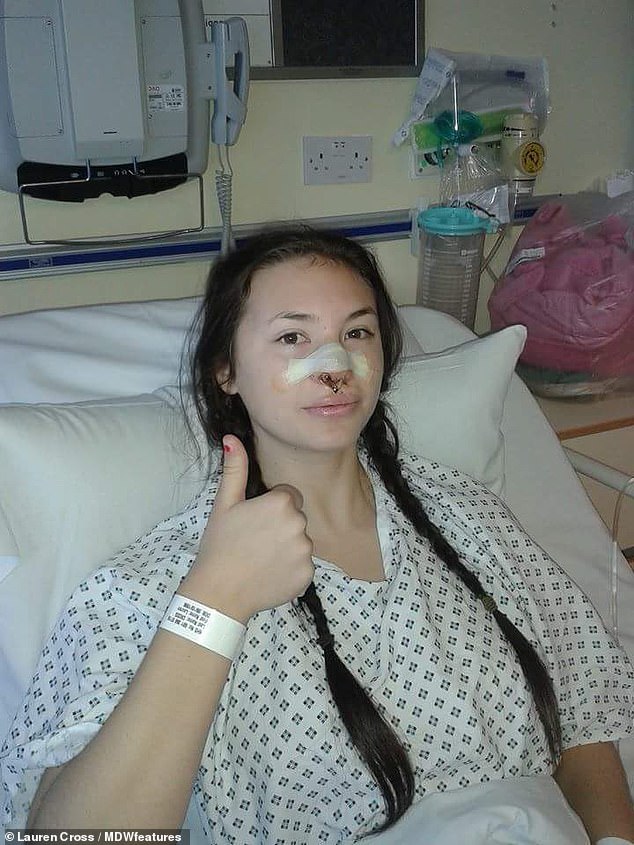 Miss Cross woke up from her rhinoplasty at 17 with ‘packs’ in each nostril and a splint held over her nose with tape. She was forced to take two weeks off college to recover

Refusing to let her condition hold her back, Miss Cross has always enjoyed yoga, dancing, mountain biking, fishing and going to the gym.

‘For me, it’s all about surrounding yourself with positive vibes, whether that be people, places, or your jobs and career,’ she said.

‘I have always tried to be as honest, open and positive about having a cleft lip and palate so I can set a good example for any worried parents and other people with clefts.

With no further surgeries on the horizon, Miss Cross even found being discharged in November 2015 strangely bitter-sweet.

‘It was quite emotional after being on this journey for 19 years, she said.

‘Social media is a fantastic way to raise awareness. By simply sharing a photo, and using hashtags, or visiting the CLAPA (Cleft Lip and Plate Association) website,’ she said.

‘Some amazing profiles on Instagram such as CleftClub are great where you can find many inspirational stories like mine.’ 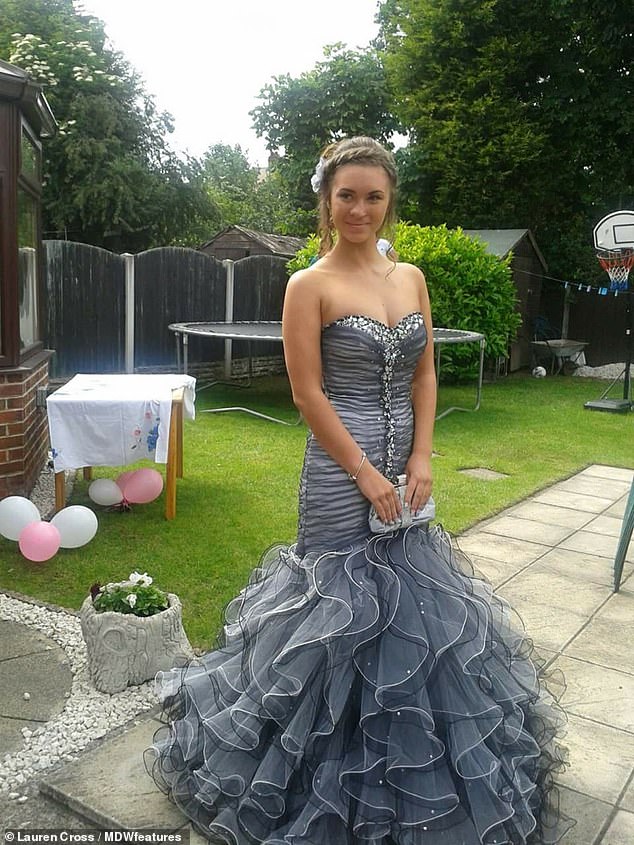 Miss Cross has endured cruel comments from bullies throughout her life. On the day of her prom (pictured) someone even messaged her on social media calling her ‘scar face’. She was also always aware of people gossiping about her behind her back at secondary school 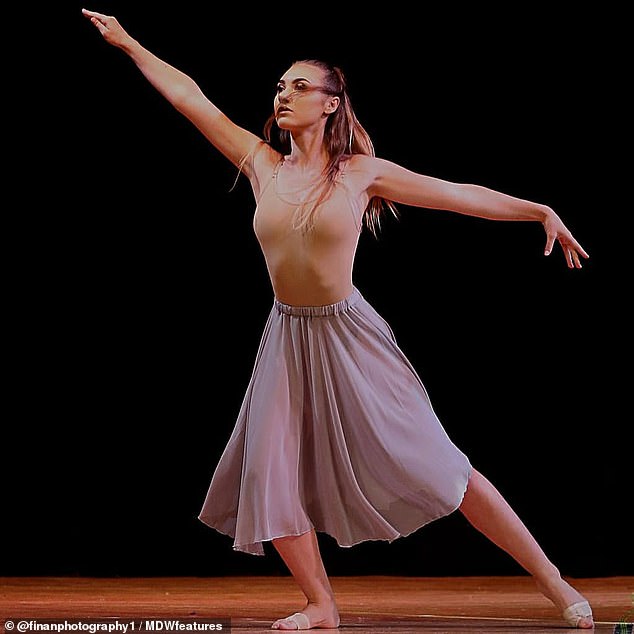 A keen dancer, Miss Cross has never let her condition hold her back and has always enjoyed yoga, going to the gym, mountain biking and fishing. She also grew up with some good friends