A morbidly obese man who got through 24 packets of Walkers crisps a day has shed a remarkable 18st (114.3kg) after doctors told him he was eating himself to death.

After being diagnosed with type 2 diabetes and told his life was on the line, Mr Hardie even began to feel suicidal and ‘just couldn’t be bothered with life’.

Deciding enough was enough, Mr Hardie ditched his 6,000 calories a day diet and started working out with a personal trainer.

Just 18 months later, Mr Hardie, from Clydebank, West Dunbartonshire, has lost more than half his body weight and has even reversed his diabetes.

Weighing just 13st 2lbs (83.4kg), Mr Hardie feels better than ever and is awaiting surgery to have his excess skin removed.

Deciding enough was enough, Mark Hardie joined a gym and started working out with a personal trainer. After losing 18st (114.3kg) in just a year-and-a-half, he now weighs 13st 2lbs (83.4kg). He has also lost over 10 inches off his waist and no longer wears 6XL shirts 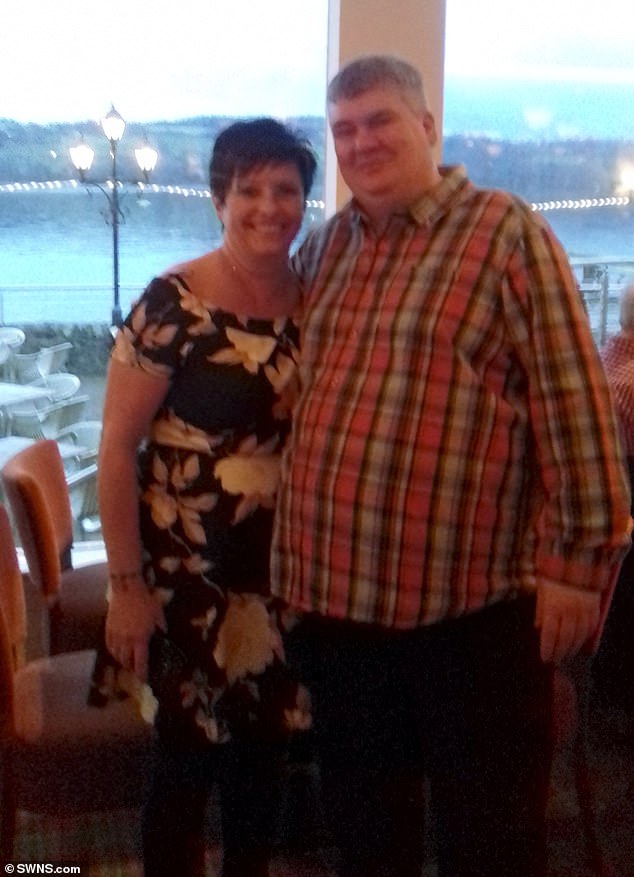 Mr Hardie (pictured with his wife Dawn Hardy) was morbidly obese, weighing an astonishing 31st 1Ib (197.3kg). He was left suicidal after doctors diagnosed him with type 2 diabetes and warned him his life was on the line unless he ditched his 6,000 calorie a day diet 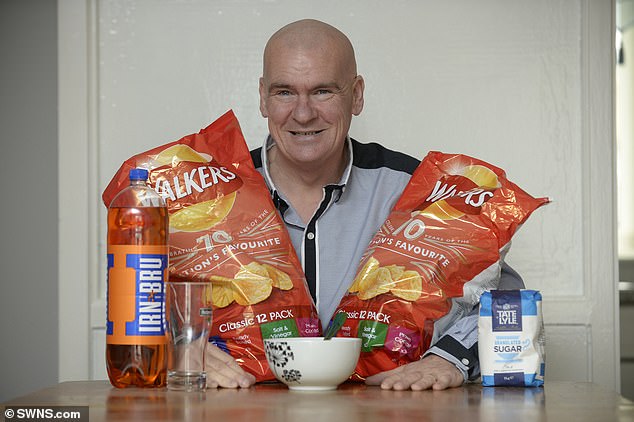 In his old diet, Mr Hardie would get through 24 packets of Walkers crisps and 12 litres of fizzy drinks every day. He would even add seven tablespoons of sugar to his cereal at breakfast

Mr Hardie, who used to take more than an hour to walk 20 metres, was told to sign up to his local gym by a close friend a year-and-a-half ago.

At the time he wore 6XL shirts and a 58-inch trouser waist.

Since adopting his new healthy lifestyle, Mr Hardie has lost more than 10 inches off his waist and is on his way to achieving his target weight of 12st 5Ibs.

‘I feel great, I’m out running all the time now,’ he said. ‘It’s just incredible to see such a big difference in myself.’

Mr Hardie, who is married to 50-year-old Dawn, used to gorge on cereal with seven tablespoons of sugar for breakfast, followed by fish and chips for lunch.

He would then scoff an astonishing 3,672 calories while eating three McDonald’s Big Mac meals, with three portions of fries and three strawberry milkshakes.

Although Mr Hardie was slim growing up, he began to comfort eat in his late 20s when his mental health took a turn for the worse.

‘When I eventually got diagnosed with type 2 diabetes at 31-years-old that was it – I began to feel really suicidal,’ he said.

‘I just couldn’t be bothered with life or anything. I was tired all the time, always gasping for air.

‘It would take me one hour and 10 minutes to walk 20 metres because I would stop and start.

‘At some points, I would just lean on a wall because I couldn’t stay on my feet for long.’ 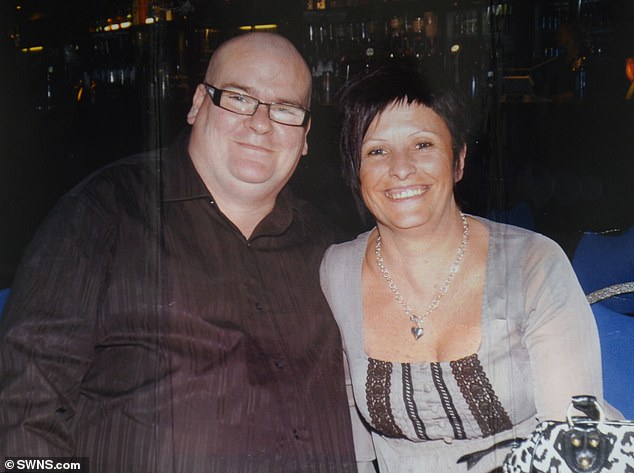 Pictured before his weight loss with his wife, Mr Hardie would take more than an hour to walk 20 metres as he would have to keep stopping for breaks. Now slim, Mr Hardie claims he feels ‘lighter’ and has more energy, which has also improved his relationship with his other half 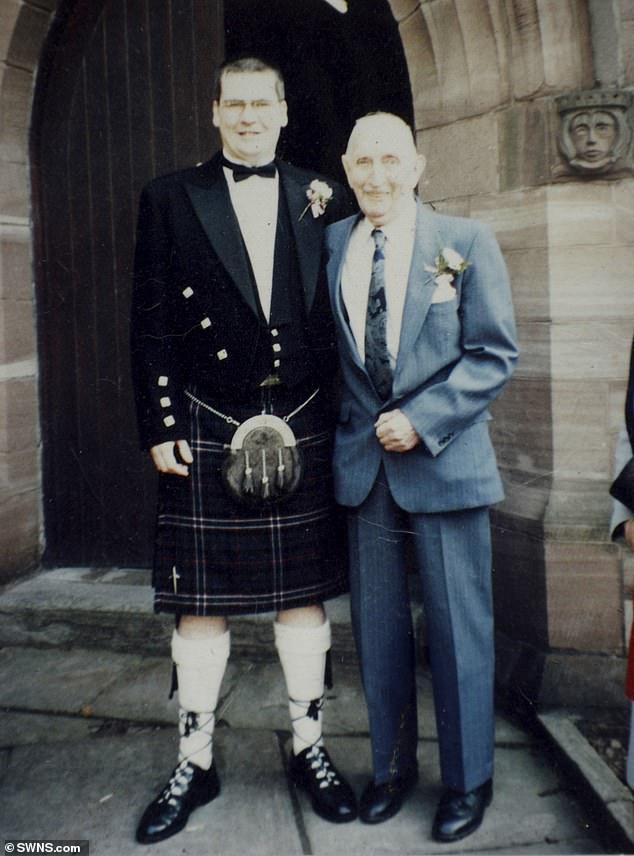 Pictured at his wedding in 1997, Mr Hardie used to be slim but gradually gained weight when his mental health started to decline in his late 20s, which caused him to comfort eat

Breakfast: Cornflakes with seven tablespoons of sugar, followed by an omelette

Lunch: Fish and chips from his local takeaway

Snacks: 24 packets of crisps, a full pack of ginger snap biscuits, six bottles of 2L Irn Bru or Coca-Cola and a multi-pack bar of chocolate

Dinner: Tuna salad or poached eggs on a salad

Now healthy, Mr Hardie admits his previous diet was ‘ridiculous’. ‘I would eat anything and everything, just as much as I could,’ he said.

‘Even though I was diagnosed with type 2 diabetes and given insulin to keep my blood sugar level from getting too high, I was still eating a lot of sugary things.

‘My blood sugar levels were meant to be between 4 to 7mmol/L but instead they were sky high at 33mmol/L.

‘I was getting up during the night and getting through bottles of fizzy drinks and also during the day.

‘So my doctor said I had to lose weight otherwise I wouldn’t be around any longer and since 18 months ago I have been on a mission to lose all of it.’ 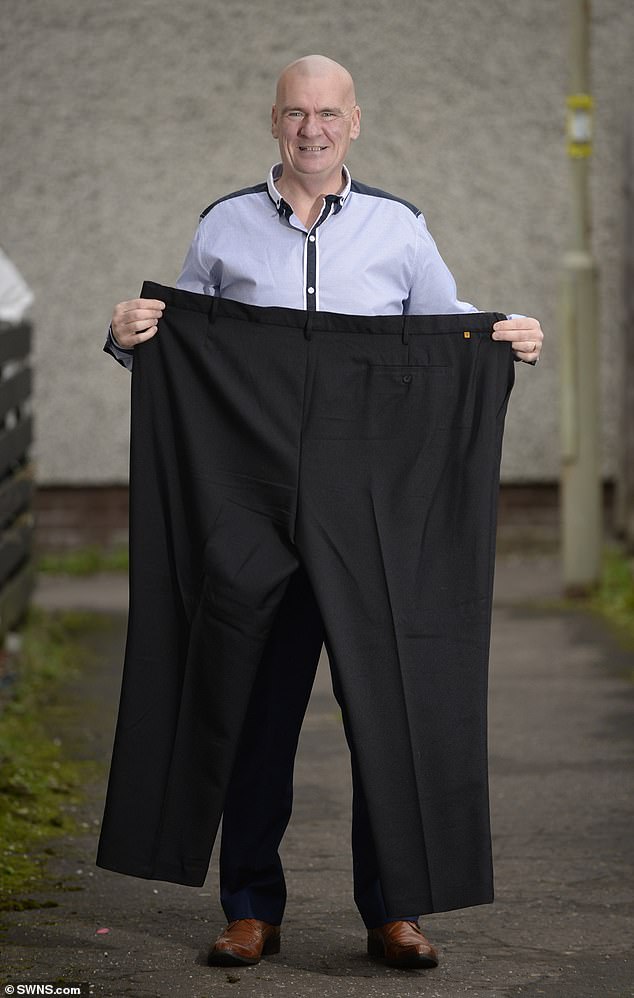 Now close to achieving his target weight of 12st 5Ibs, Mr Hardie no longer struggles with suicidal thoughts. He is hoping to have surgery on the NHS to remove his excess skin

Mr Robb, 40, helped educate Mr Hardie about the types of food he was eating and introduced him to high-intensity interval training.

Mr Hardie now enjoys a healthy breakfast of porridge with slices of banana, has ditched fizzy drinks for water and snacks on fruit between meals.

In August, Mr Hardie went to the diabetes centre at Gartnavel General Hospital where he was told he no longer had the disease.

‘I am so proud of myself, I feel so much lighter and I have more energy,’ he said.

‘I’m more enthusiastic and I no longer get suicidal thoughts. I can even stand for long periods of time.

‘I have a bit of excess skin left so I’m waiting to see if the NHS will do the surgery to remove it.

‘I just want to tell people that if I can do it then they can do it too. My wife is happy to see me at my best now as well.’