Incredible transformation of woman, 25, who had excess skin removed

A 25-year-old woman has shown her incredible transformation after having 4lbs 4oz (1.9kg) of excess skin removed which she used to have to ‘tuck in’.

Annie McManis, from Christchurch, New Zealand, had piled on the pounds during her teenage years, which were tainted with mental health problems and bullying.

The folds of excess skin she was left with caused rashes and uncomfortable sweating, until she decided to have it removed in May 2018.

Now, working out up to five times a week, Miss McManis embraces her new figure following years of self-loathing.

Annie McManis (25) from Christchurch, New Zealand, has shown her stunning transformation after having 4lbs 4oz (1.9kg) of excess skin removed which she used to have to ‘tuck in’ 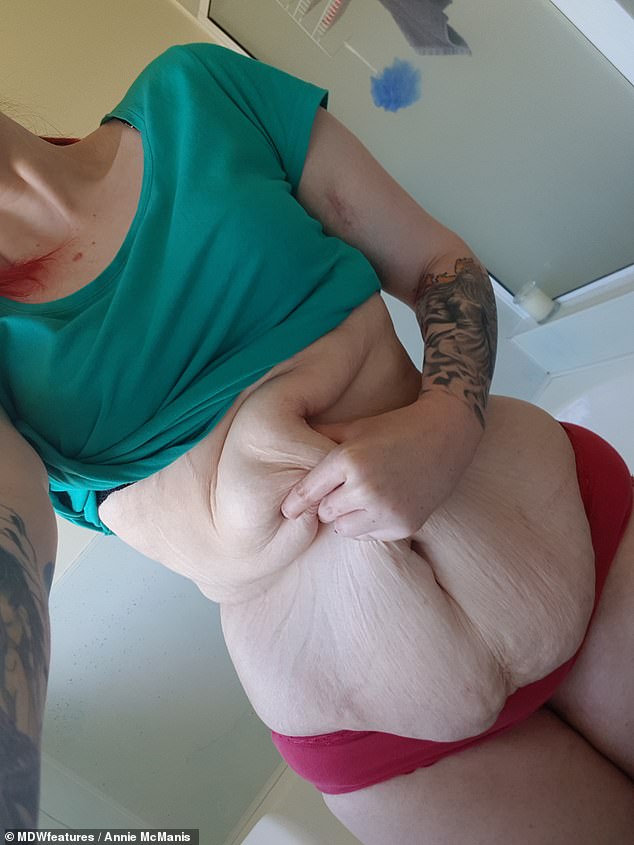 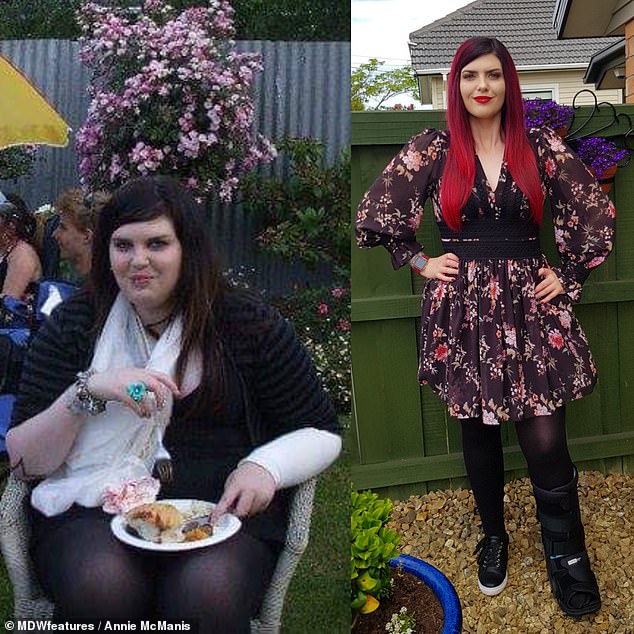 A diagnosis of MS in 2016 encouraged her to ‘value her life so much more’, and she lost an astounding 113lbs (51.2kg) of weight that she had piled on during her teenage years

At school, Miss McManis was frequently bullied, which she said lead to her weight gain and poor mental health.

Miss McManis’ became a recluse, staying in bed watching television and snacking  for hours on end.

Miss McManis said: ‘I’ve always struggled with my mental health and being horribly bullied throughout my younger years has definitely had a massive impact.

‘I was always a bit of an outcast and a recluse as a child, and being a bigger girl, I was cruelly picked on a lot for that.

Multiple sclerosis, known as MS, is a condition in which the immune system attacks the body and causes nerve damage to the brain and spinal cord.

It is an incurable, lifelong condition which ranges from producing fairly mild symptoms to causing severe disability.

Around 100,000 people are thought to be diagnosed with MS in the UK, and around 2.3 million worldwide.

It is more than twice as common in women as it is in men and is usually diagnosed in their 20s and 30s.

Symptoms can be managed with medication and therapy, but the condition shortens the average life expectancy by around five to 10 years.

‘I felt lonely, disappointed and ashamed of myself. I just felt so worthless and constantly doubted myself as I was my own worst critic.

‘I would usually stay in bed until 6pm when I could, and I would binge eat a large family sized bag of crisps, cookies, sweets and cakes. I’d do this while watching TV into the early hours of the morning.’

By the age of 21, Miss McManis suffered from severe anxiety and her weight gain had started to show worrying signs – she was pre-diabetic, chronically depressed, had high blood pressure and joint pain.

She said: ‘I was constantly getting infections, I had no energy and I’d get migraines. Due to my weight, I was pre-diabetic and had high blood pressure as well. I was pretty much always in discomfort because I suffered from joint and back pain.

‘My numerous health issues led to me constantly being in and out of hospital. I remember having a routine weigh in at one of my appointments and I felt so sick with what the number said on the scales.

‘I remember on that day thinking I’d had enough, and I wanted to live old enough to see myself have a family and live my life to the fullest.’

But a shock diagnosis was the real catalyst for Miss McManis’ drastic change in outlook. 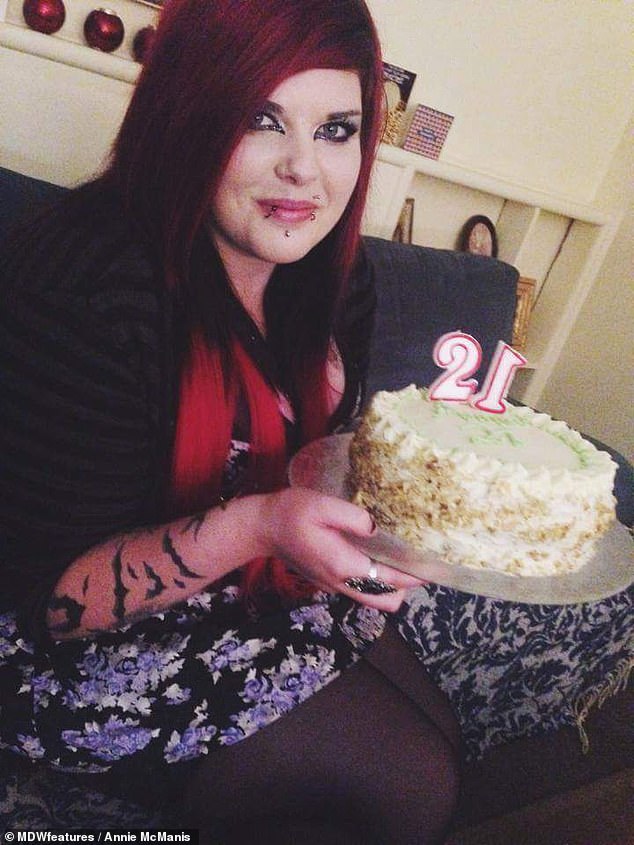 Miss McManis become reclusive and would stay in bed watching television and binge eating. By the age of 21, Miss McManis weight gain created numerous health issues as she was pre-diabetic, chronically depressed, had high blood pressure and joint pain 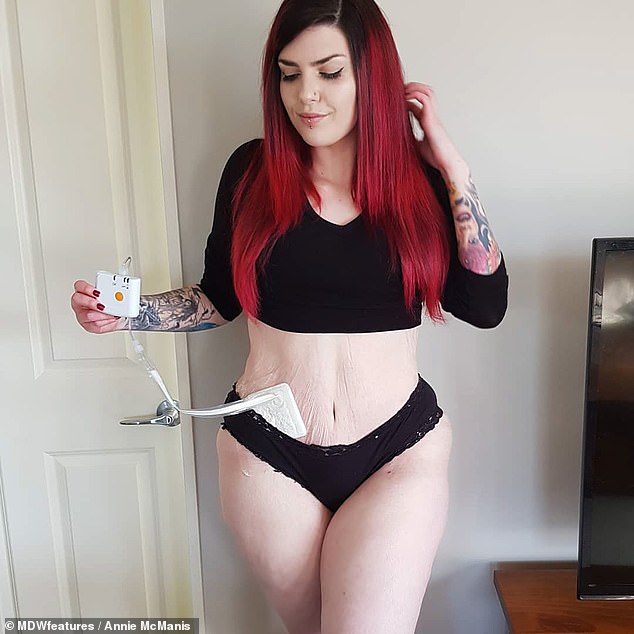 Miss McManis went from a dress size 22 to a size 12 before having her excess skin removed. Pictured, Miss McManis three months after the operation with a PICO dressing to draw out any excess fluid from around the wound

In January 2016, multiple sclerosis left her paralysed on her entire left side. She was one of around 100,000 people thought to be diagnosed with MS in the UK, and around 2.3million worldwide.

She said: ‘I was in the brain injury unit for two months while I learned to walk and regain the use of my left arm again.

‘Even though it was devastating news, I knew it was even more imperative to be more mindful about my health and wellness than before.’

Miss McManis realised how much she had taken her health for granted, sparking a switch in her attitude.

She said: ‘The diagnosis has definitely made me cherish and value my life so much more. I only have one life, so I choose to live my life to the fullest now. I have learned that it’s okay to put myself and my wellbeing first.’

After regaining her strength in hospital following the diagnosis, Miss McManis got serious about dieting and exercising to shed the weight which had been a burden for the past three years. 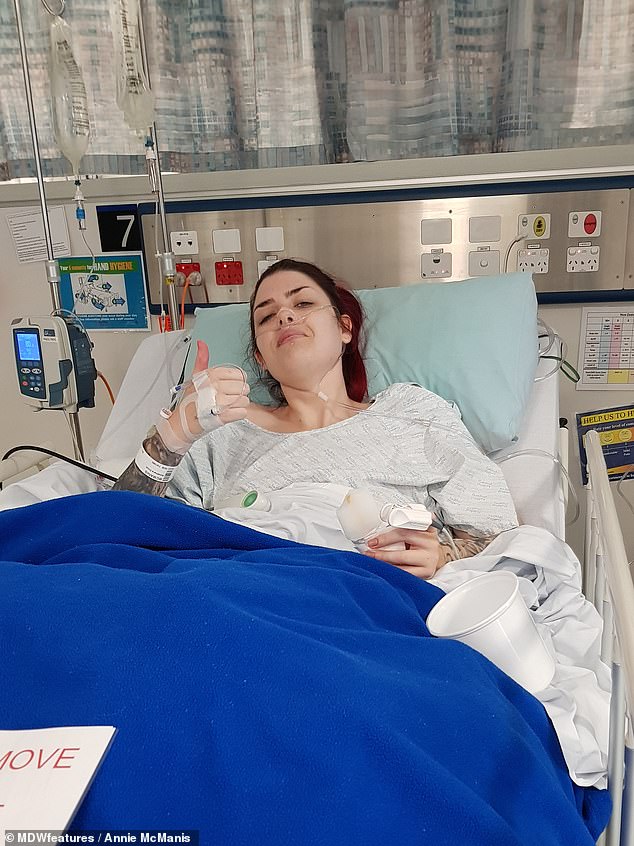 Miss McMannis was unhappy that you couldn’t see the difference in her weight loss due to excess skin, and decided to have surgery to remove it. Picrtured, in hospital before the op 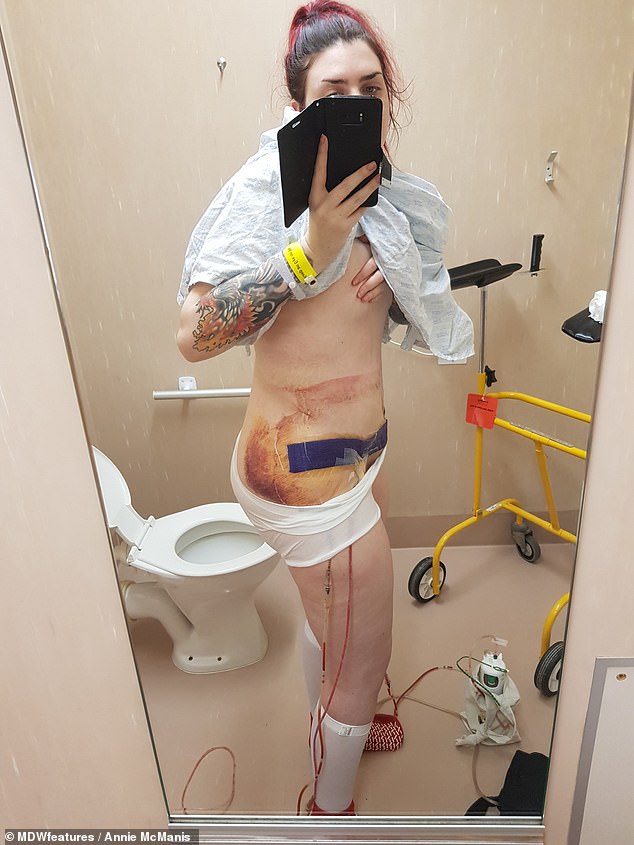 Miss McManis had bruising and swelling following her surgery

But, to Miss McManis’ disappointment, her hard work was barely noticeable due to the excess skin that was left.

She said: ‘It was really hard because when you work so hard to lose all the weight and you can’t see that work because of the skin, it’s difficult to handle.

‘It had a big impact on my mental health and I was constantly aware of tucking it in and not being able to wear certain clothes because I was so self-conscious.’

In May 2017, Miss McManis made the decision to have 4lb 4oz (1.9kg) of her excess skin, which caused rashes, removed, hating how she had to tuck it into clothes.

She had the surgery, called abdominoplasty, done in May 2018, and now, her life is completely different.

She said: ‘This journey hasn’t just been about losing weight but also the self-discovery I have made along the way. There have been plenty of challenges, but it’s been so worth it, and I wouldn’t take any of it back.

‘I no longer have skin rashes or sores where the folds of my skin were. I don’t have to tuck my skin in all the time and it doesn’t get hot, sweaty and uncomfortable anymore. It’s definitely improved my back pain.

‘Now, I feel much more confident and I actually get excited to go clothes shopping. 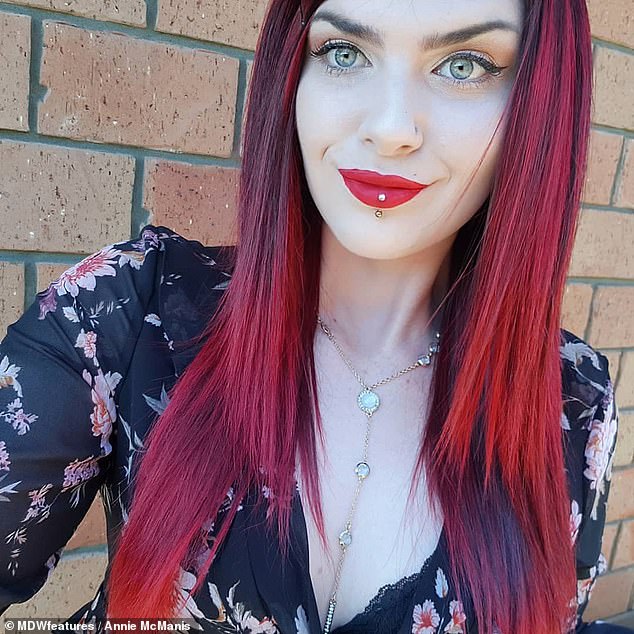 Now, Miss McManis has much more self confidence, no longer needing to ‘tuck in’ her skin to her clothes. She works out up to five times a week and eats healthily

WHAT IS A TUMMY TUCK?

Known medically as an abdominoplasty, tummy tucks improve the appearance of the stomach.

Surgeons remove excess skin and fat from the abdomen, and tighten connective tissues.

The end result is a more toned look. Many women, and men, have the operation to boost their body image.

A tummy tuck is also the go-to option for women who have given birth and have a prolonged ‘mummy tummy’.

The surgery repairs the rectus diastasis – two abdominal muscles than can separate during pregnancy.

Figures show nearly 130,000 tummy tucks were performed in the US last year. There are nearly 3,000 performed privately in the UK each year.

‘Now I work out three to five times a week for at least 40 minutes to an hour.

‘One of the biggest problems I faced was adapting my lifestyle and physical fitness to suit me and my limitations with my MS.

‘At the beginning I started to just move more and I’d walk for 30 minutes a day, then I slowly built up my regime since.’

She added: ‘My meals consist of a low-calorie bowl of muesli and fruit for breakfast, a wholemeal sandwich for lunch with a piece of fruit or a muesli bar. Then for dinner I usually have a small portion of meat and a large portion of vegetables.

‘What I would say to anyone else is to start off small by doing one thing a day that paints a bigger picture for the future.

‘Move your body for at least 30 minutes a day and find something that’s fun and motivates you. Losing weight isn’t about crazy dieting and intense workouts.

‘Set up a goal sheet and a reward system so you can treat yourself once you achieve your goals.

‘Personally, I found having a food diary is really good to see what you’re eating and what you can cut back on or substitute for healthier versions.’