Incredibles 2: Even better than the original

You’ve got to feel sorry for the Underminer. He pops up as a distinctly secondary character at the very end of the original Incredibles film with one purpose: to clearly signal that a sequel was on its way. Like the rest of us, he’s had to wait 14 years for that sequel to arrive, and when it does..?

While he has a pivotal role to play in a movie that picks up at the very moment the original ended, I give little away when I say that his work is done and dusted in barely ten minutes.

On the plus side, this ensures that John Ratzenberger continues his fine record of lending his voice to every Pixar feature film, but, less positively, the Incredibles are back where they started at the beginning of film one: attempting to live as a normal family without using their superpowers, which are still deemed illegal.

The Incredibles 2, a beautifully crafted screenplay that will entertain the entire family, it is one of those rare cinematic things: a sequel better than the original

This seems like the perfect excuse to make the first film all over again; only better. Which is pretty much what Brad Bird – writer and director of both films and the voice of Edna Mode, designer to the superheroes – has done. The Incredibles 2 is one of those rare cinematic things: a sequel even better than the original.

Mind you, as someone who didn’t altogether warm to the original – I thought it too long, too complicated and just a little bit too Spy-Kids-meets-the-Jetsons – I would say that.

I wasn’t altogether wrong. At the box office, the first movie only scraped into Pixar’s all-time top ten. But repeat viewings on DVD (are any films watched more often than Pixar’s?) have endeared it to an entire generation of parents and children. My son, who was a bit blasé about the original as a six-year-old, could barely tear himself away as we rewatched it ahead of the release of the sequel. And he’s, er… 20 now.

Elasti-girl, mother of three is recruited to fight crime in the city of New Urban while frustrated but dutiful husband, Mr Incredible stays home to look after teenager Violet

Fittingly and perhaps a little fortuitously, given how long animated films take to make, the new one is all about female empowerment. For when wealthy industrialists Winston and Evelyn Deavor become the new champions of the superhero cause, they decide the best way of advancing their campaign to legalise superpowers is to use… Elastigirl, otherwise known as wife and mother-of-three Helen Parr.

‘Better than me?’ croaks a flabbergasted Bob Parr, a man whose sense of self-worth is directly linked to his superhero alter ego, Mr Incredible. But this time it’s his wife (surely ‘Elastiwoman’ would be more fitting for an emancipated mother-of-three) who goes off to fight crime in the city of New Urban with Winston and Evelyn, while her frustrated but dutiful husband stays at home to look after troubled teenager Violet (who specialises in invisibility and force fields), the unbiddable but aptly named Dash (speciality: high speed) and baby Jack-Jack, whose array of fast-emerging superpowers provide several of the comic highlights of the film.

In a beautifully crafted screenplay, they also provide an excuse for one of the best lines. ‘No firing baby around the house, you understand?’ It’ll make more sense when you see it, which you must. If only for that and Jack-Jack’s unforgettable fight with a very confused raccoon.

Having been 14 years since the Pixar film Incredibles first debuted the actors have aged substantially, Huck Milner has replaced the now-too-old Spencer Fox as Dash

I love the retro, back-to-the-future design, which does such a good job of evoking all those past visions of the future that have never really arrived. But there’s so much else to enjoy here too – from Elastigirl’s full-on, girl-power fight with the evil Screenslaver to an exhausted Mr I’s wonderful rant against… well, pretty much everything. ‘I’m just rolling with the punches,’ he rails, worn out by the effort of helping Dash with his homework, Violet with her love life and Jack-Jack with that tricky transition from normal baby to super-powered phenomenon. ‘I’m Mr Incredible, not Mr So-So… I just need a bit of me time, then I’ll be good to go.’

Exhausted parents everywhere will know exactly what he means.

At 60 and 74 respectively, I did wonder whether Holly Hunter and Craig T Nelson, who provide the voices of Helen and Bob, might be beginning to sound a little old to play a couple presumably in their late 40s. But the Incredibles just wouldn’t be the Incredibles without Hunter’s trademark sibilant or Nelson’s wonderful world-weariness. With Sarah Vowell continuing as the voice of Violet, Huck Milner replacing the now-too-old Spencer Fox as Dash, and Eli Fucile a gurgling joy as Jack-Jack, this is a voice cast of the highest calibre.

The result is one of the great pleasures of this summer; a family film that really will entertain the entire family and is a total delight, from the Underminer of the opening to the exquisitely styled credits at the end. Hugely recommended.

The Secret of Marrowbone (15)

It is only 13 months since more than 70 people perished in the appalling Grenfell Tower disaster and yet Universal, in a display of surely questionable judgment, still think it’s the right moment to release Skyscraper, a would-be summer blockbuster about a fire in the world’s tallest building.

True, The Pearl in Hong Kong is fictional and almost no one dies in the fire itself, but there is still something very uncomfortable about watching flames racing up a tall building while a family is trapped inside. Because in real life, we all know there’s no Dwayne Johnson riding to the rescue.

But whatever you make of the decision to release it, this mix of Die Hard and The Towering Inferno is still disappointing stuff, marred by a clumsy script, poor supporting performances and unconvincing visual effects. 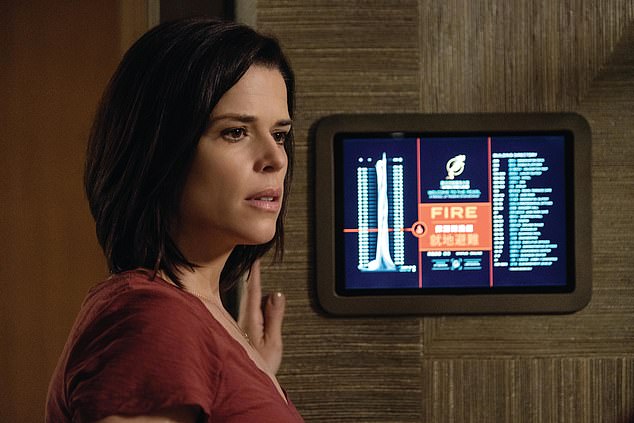 The Secret Of Marrowbone is a strange, would-be chiller that is meant to be set in Nixon-era rural America. But a weak sense of place is the least of its problems, as the fleeing Fairbairn family (minus their father) arrive at the run-down maternal family home and change their surname to Marrowbone, their mother’s maiden name.

Director Sergio G Sánchez, who wrote The Orphanage, delivers an odd film that never quite settles.

Despite being written and directed by Paul Schrader, who wrote Taxi Driver and Raging Bull, it’s not really the sort of film where anything gets better.