Pictured: Incredibly well-preserved mummies of a family of eight Inuits including a six-month-old baby boy buried alive in Greenland 500 years ago

A family of eight Inuits including a six-month-old baby boy are pictured frozen in time from 500 years ago.

Three sisters with their three daughters and their sons, four and six months old were discovered at the abandoned Qilakitsoq encampment which lies on the Nuussuaq Peninsular near Uummannaq, Greenland.

Grouse hunters Hans and Jokum Grønvold uncovered the group in 1972 in a shallow cave beneath a rocky outcrop. Because the mummies were so well-preserved the men reported their findings to the police.

Incredible pictures show the mummies with their skin, hair, eyebrows and fingernails intact and bundled in animal fur to prepare them for hunting in the afterlife.

A six-month-old baby boy believed to be buried alive with its eyebrows and hair still intact. The family of eight were found by hunters in 1972 at the abandoned Qilakitsoq encampment, Greenland

Archaeologists believe the family died around 1475AD and the accidental mummification process resulted from the ice-cold temperatures, according to The Sun.

The shocking discovery found six women with tattoos on their foreheads and chins in the settlement on the west coats of Greenland, 280 miles north of the Arctic.

And the Inuit culture meant that if the mother passed away, her children must be buried with her, even if they were alive, to ensure the family passed peacefully to the afterlife together. 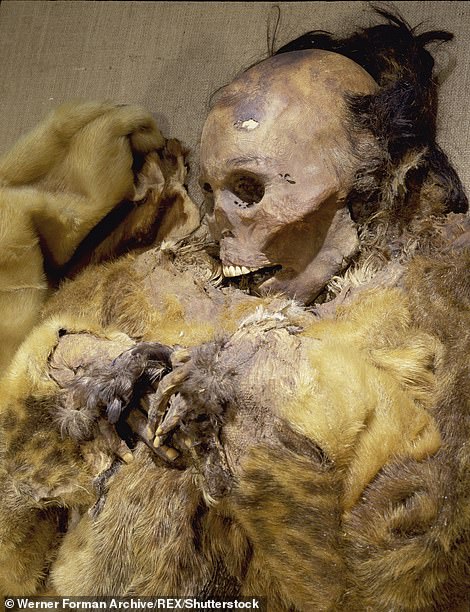 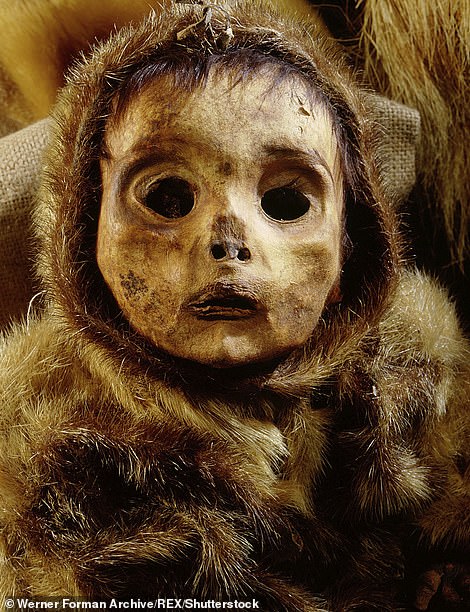 One of the women shows her teeth and dark locks of her preserved through the accidental mummification process caused by the ice-cold temperatures (left). A close-up picture of the six-month-old baby with piercing eye sockets and wrapped in thick fur (right) 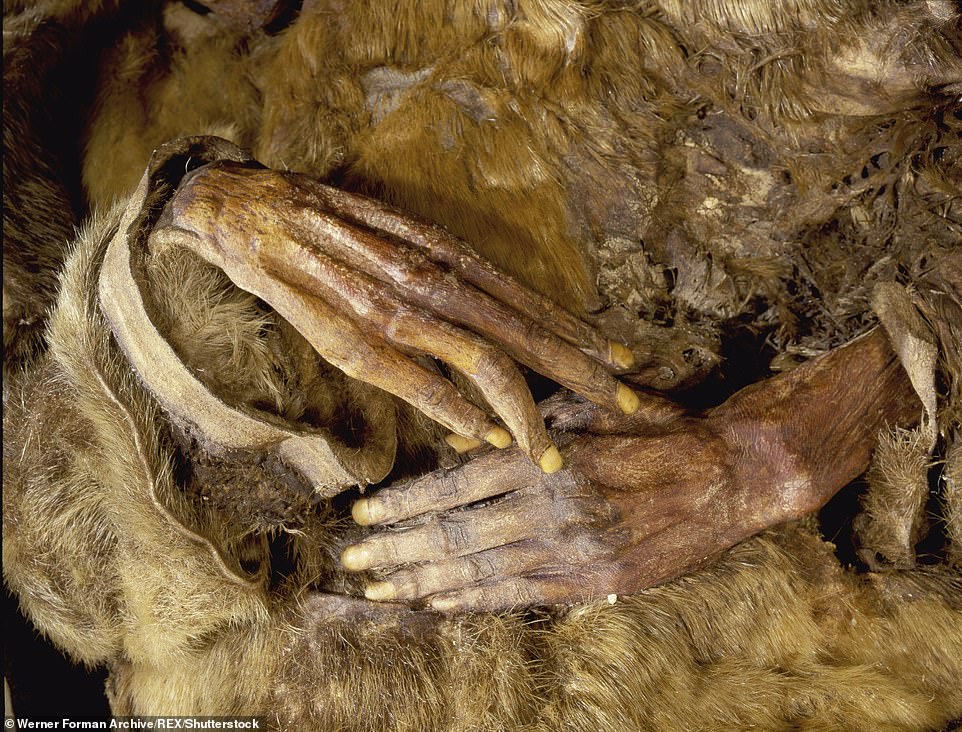 The woman’s hands crossed over her body show fingernails and skin perfectly preserved. Archaeologists believe the family died around 1475AD

Hunters found the bodies stacked on top of each other with layers of skin and fur between them.

The eerie close-up of the baby boy shows the infant swaddled in a fur hood with dark brown hair poking out.

It was not uncommon for the infant to be smothered after the mother had died to prevent it dying a painful death through starvation.

The women died from natural causes including kidney stones, constipation and poor health. The three sisters were believed to be aged 50 with their three daughters aged between 18 and 30.

Researchers also believe the four-year-old boy had Down’s Syndrome, where it was a custom to bury these children alive.

A total of 78 items of clothing including the skins of seal and reindeer allowed the bodies to undergo the mummification process.

Four of the Inuits are now displayed at the Greenland National Museum in Nuuk.

How are the mummies preserved so well?

The freezing temperatures in Greenland have allowed the mummies to be preserved with their skin and fingernails still intact.

A body decomposes after death by enzymes breaking down the soft tissues. However as the temperatures drop, so does the enzyme activity.

In ice-cold climates the bodies turn to ice mummies but will only be preserved so long as they remain frozen.

For an ice mummy to form the temperature surrounding the corpse should not rise above 32 degrees Fahrenheit (0 degrees Celsius).

And the bodies need to be protected from the elements and other animals that could harm it i.e. wrapped in layers of animal fur or enclosed in a glacier.

The rocky outcrop allowed the group to be preserved through the balance of humidity, acidity and shade with a constant frost to keep their skin intact.

Also the rocks allowed drainage and protection from the harsh elements of strong winds.