Gunfire broke out in cities across the US during Independence Day celebrations, leaving dozens of people injured and at least 14 dead.

Chicago appeared to experience the worst of the violence on Saturday as 30 people were shot and eight were killed, including two children.

New York City, Memphis, Omaha, Cleveland and several other cities were also rocked by a spate of shootings amid the holiday revelry.

One of the children killed in Chicago was identified by her family as seven-year-old Natalie Wallace.

The girl was playing outside her grandmother’s house in the city’s Austin neighborhood during a Fourth of July party when a vehicle pulled up and three men emerged and began shooting indiscriminately at about 7pm.

Gunfire broke out in cities across the US during Independence Day celebrations on Saturday, leaving dozens of people injured and at least 14 dead. Police are pictured at the scene of a shooting in Chicago’s Austin neighborhood where eight people were struck by gunfire 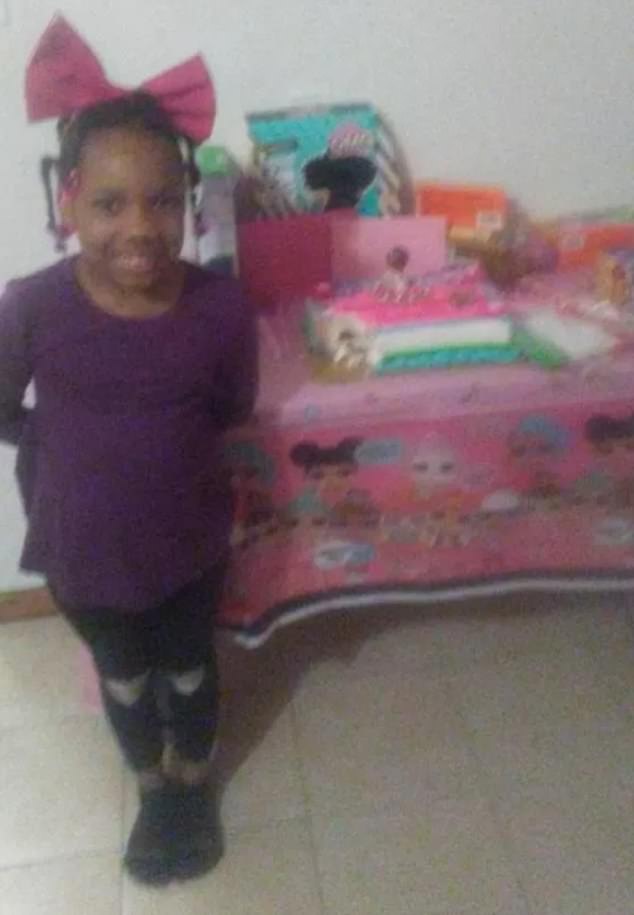 Natalie was shot in the head and rushed to the hospital, where she was pronounced dead, according to the Chicago Tribune.

Mayor Lori Lightfoot tweeted: ‘Tonight, a 7-year-old girl in Austin joined a list of teenagers and children whose hopes and dreams were ended by the barrel of a gun.

‘We cannot grow numb to this. We are making progress in slowing shootings, but we have to do better, every single one of us.’

Seven other people were wounded in the same Austin attack, including a 32-year-old man who is now in fair condition.

Waller said police are reviewing video of the incident and no arrests have been made.

Another shooting in Chicago’s Englewood neighborhood left four people dead, including a 14-year-old boy who has not yet been identified.

Four others were wounded in that shooting, including boys ages 11 and 15.

The Tribune reported that four men stormed a holiday gathering and opened fire before fleeing the scene. They have yet to be arrested.

Three other shootings in Chicago on Saturday killed a 34-year-old woman, a 31-year-old man and a 20-year-old man, per ABC7.

Saturday marked the city’s third consecutive weekend where a child under 10 has been fatally shot.

The Chicago Police Department deployed 1,200 additional officers over the weekend with a goal of reducing violence that accompanies the holiday each year.

‘All of us have to embrace our notion of community and think about what we can do, each of us in our own way, to make our communities safe and healthy and vibrant.’

Many other cities reported an alarming increase in gunfire mixed in with the celebratory fireworks on Saturday.

In New York City, at least two people were killed and 10 were injured in shootings overnight, police said.

Less than two hours later a 23-year-old man was shot in the back in Harlem before being rushed to the hospital.

Authorities said the man, who has not been identified, was uncooperative when he was interviewed by police before he died in the hospital.

That shooting is still under investigation as detectives canvas the area for ballistic evidence and video.

Details about the other shootings in the Big Apple were not immediately available.

They came after the city experienced it’s deadliest June in 24 years with 205 shootings reported. 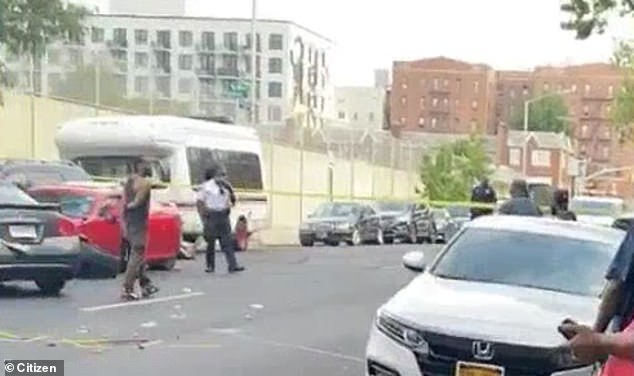 In New York City, at least two people were killed and 10 were injured in shootings overnight, police said. Officers are pictured at the scene of one shooting on Sunday morning

At least seven shootings were reported in Memphis, Tennessee, on Saturday, leaving four people wounded, according to WREG.

A teenager in the Whitehaven neighborhood was rushed to the hospital in critical condition after neighbors reported hearing an argument at a home before gunfire broke out.

‘We were over here,’ a witness to that shooting said. ‘We were just fixing up our tables, and next thing we know, we see the ambulances come all around, and then the police came. I said: “What’s done happened here?”‘

‘I could just imagine what the other people’s family is doing, what they’re going through,’ the witness added. 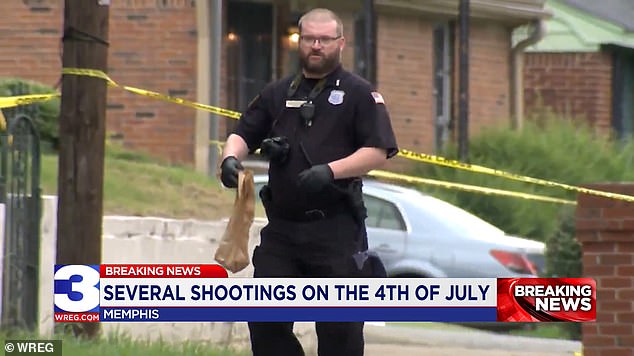 At least seven shootings were reported in Memphis, Tennessee, on Saturday, leaving four people wounded. A police officer is pictured at the scene of one of the shootings

About 30 minutes later a woman driving on Interstate 240 when a man driving a gold Pontiac began shooting at her vehicle.

Police said that woman is okay but the suspect has not been captured.

One of the men told WREG he was backing out of his driveway on Alcy Road when he was shot at by three men driving by in a Saturn Vue.

‘When I backed into the middle of the street, I kind of paused for a little bit because I heard a lot of fireworks, what I thought were fireworks, but they were gunshots,’ the man said.

Both he and the other victim are expected to survive.

The first victim said the attack appeared to be random.

No arrests have been made in any of the Memphis shootings, police said.

At least five shootings were reported in Cleveland in the first five hours of July Fourth, leaving four people wounded.

And in Omaha, Nebraska, police have asked the public for information on six separate shootings reported between Friday night and early Saturday morning.

Eight people were injured in those shootings and all are expected to recover. 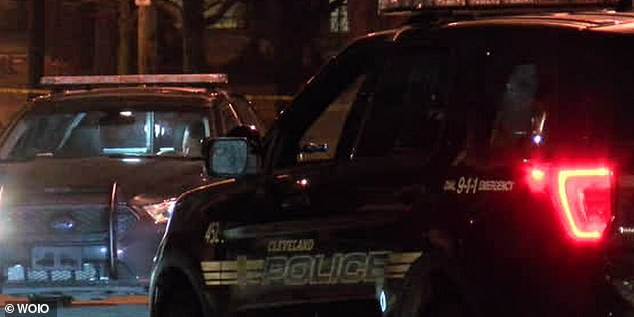 At least five shootings were reported in Cleveland in the first five hours of July Fourth, leaving four people wounded. Police are pictured at the scene of one of the shootings

Authorities in Greenville County, South Carolina, are currently investigating a shooting at a nightclub that left two people dead and eight wounded.

Video footage posted to social media showed people at what appeared to be a rap concert inside the club. The clip shows people inside the club hurrying toward the exit before the screen goes blank and gunshots are heard in the background.

Two Greenville County sheriff’s deputies noticed a disturbance at Lavish Lounge just before 2am, and saw a large crowd running out of the building, Sheriff Hobart Lewis said at a press conference.

Lewis told Greenville News the incident was ‘probably gang related’. He said authorities are searching for two suspects, though no physical description of the gunmen has been released as of Sunday morning.