India, the country hardest hit by the coronavirus pandemic in Asia, has today reported its total number of coronavirus cases have jumped to more than two million.

It is only the third nation to pass the grim milestone, lagging behind the United States and Brazil, after seeing the number of infections double in just three weeks.

With infections spreading further to smaller towns and rural areas, experts say the epidemic in India is likely to be months away from hitting its peak, putting more strain on an already overburdened healthcare system.

Authorities are continuing to battle multiple outbreaks across what is the world’s second most populous country which is home to 1.3 billion people.

It comes after the country recorded the world’s highest daily cases and deaths from coronavirus on Monday with 803 fatalities and 52,972 confirmed infections.

India, the country hardest hit by the coronavirus pandemic in Asia, has today reported its total number of coronavirus cases have jumped to more than two million 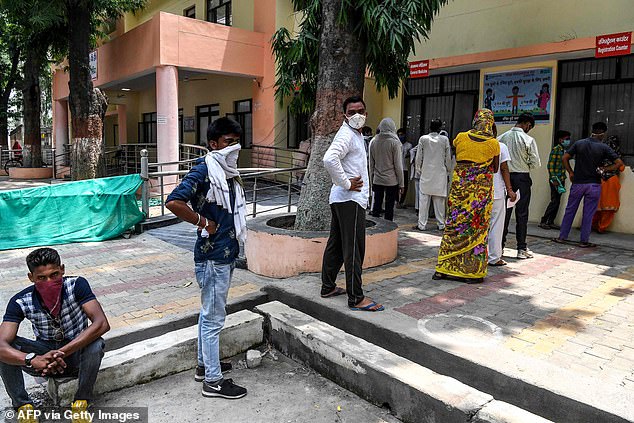 Authorities are continuing to battle multiple outbreaks across what is the world’s second most populous country which is home to 1.3 billion people. Pictured: Queues outside coronavirus testing centres at Lala Lajpat Rai Memorial hospital in Meerut

In the past 24 hours the health ministry reported 62,538 new infections, taking the country’s total to 2.03 million.

The rate of spread also appears to be increasing and is now at 3.1 per cent.

India logged its first one million infections by July 17 and crossed the 1.5 million mark just 12 days after that.

‘A country of India’s size and diversity has multiple epidemics in different phases,’ said Rajib Dasgupta, head of the Centre of Social Medicine and Community Health at the Jawaharlal Nehru University in New Delhi.

India has been posting an average of around 50,000 new cases a day since mid-June but experts say its testing rate at 16,035 per million people is far too low.

The government has taken some solace from the relatively low death rate, at about two per cent, with 41,585 deaths so far – but that figure will be understated as only deaths of people who have been tested for the virus are counted. 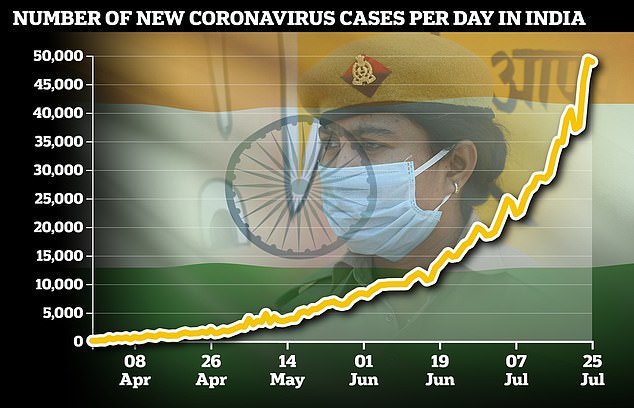 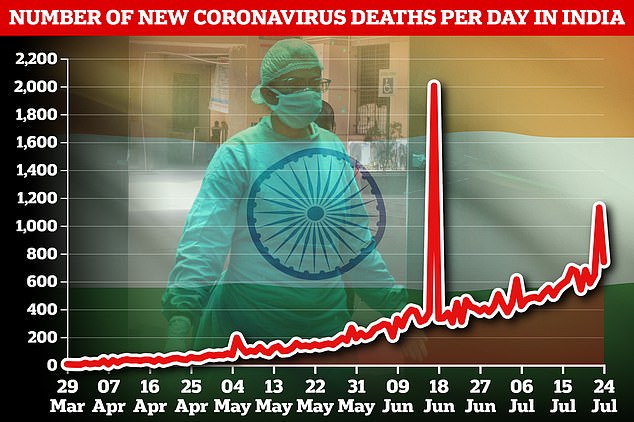 Epidemiologists say that India is likely to be months away from hitting its peak, which will put an already overburdened healthcare system under more strain.

But with Asia’s third-largest economy reeling from the impact – tens of millions of migrant workers lost their jobs almost overnight – the restrictions have been steadily eased.

Individual states and cities have been imposing localised lockdowns including IT hub Bangalore last month, the eastern state of Bihar and parts of Tamil Nadu in the south.

Previously the main hotspots have been the teeming megacities of New Delhi and Mumbai, home to some of the world’s biggest slums.

But now smaller cities and rural areas – where 70 per cent of Indians live – have begun to see case numbers rising sharply.

Sarthak Anand says his neighbours treated him like a ‘criminal’ when he got coronavirus, a common experience in India’s vast hinterland where the pandemic – and stigmatisation – are now raging.

‘Even though I have recovered fully, no one wants to come near me,’ Anand, a government employee, said outside his home in Meerut, a northern Indian city home to 3.4 million people.

On Friday India’s official caseload passed two million, and while previously metropolises like New Delhi and Mumbai were the hotspots, smaller cities and rural areas are now reporting sharp rises.

According to public health expert Preeti Kumar, the probable reason is the return home of millions of migrant workers who were left jobless by India’s sudden lockdown imposed in March. 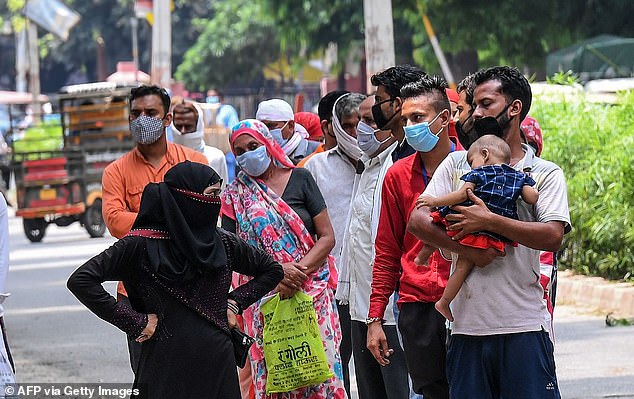 Epidemiologists say that India is likely to be months away from hitting its peak, which will put an already overburdened healthcare system under more strain. Queues for coronavirus testing in Meerut

‘We are seeing the numbers rise especially in states like Bihar and Uttar Pradesh, and with poorer healthcare systems, it is going to be a challenge,’ Kumar told AFP.

The poor northern state of Uttar Pradesh, home to roughly as many people as France, Germany and Britain combined, has now seen the pandemic reach almost every district, no matter how remote.

The state has recorded 100,000 cases. Its capital Lucknow is reporting more than 600 new infections every day, compared to only 100-150 just a few days ago.

But the official number may be a big underestimate, experts say, with the real scale potentially hugely under-reported because of insufficient testing, and deaths not being properly recorded.

Uttar Pradesh has conducted an impressive-sounding 2.8 million tests, according to a senior state official.

But given its enormous population of over 200 million people, this equates to just 14,000 tests per million. In the US state of Texas, the rate is almost 10 times higher. 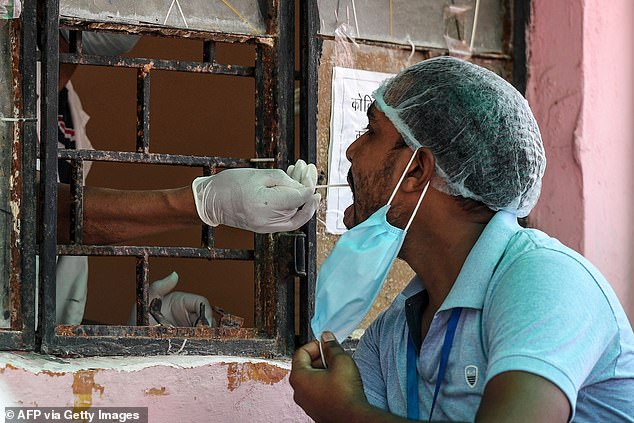 Uttar Pradesh has conducted an impressive-sounding 2.8 million tests, according to a senior state official. Pictured: Coronavirus testing in Meerut in Uttar Pradesh

Nationally, India has tested around 16,500 people per million, compared to 190,000 in the United States and 260,000 in Britain, according to a tally by Worldometer.

Apart from having one of the world’s lowest rates of spending per capita on health care, part of the reason is that coronavirus sufferers often become pariahs.

This is particularly true in smaller conurbations and in rural areas, where some two-thirds of Indians live and where face masks and social distancing are rare sights.

‘A new disease with relatively high levels of complications and mortality, with accompanying directives on physical distancing, inevitably leads to fears, apprehensions and… stigma,’ said Rajib Kumar, who heads the Centre of Social Medicine and Community Health at Delhi’s Jawaharlal Nehru University.

‘There’s both the fear of the disease as well as of isolation and quarantine,’ Kumar said.

Anand in Meerut said that after becoming infected, he submitted a list of colleagues he had come in contact with to his office so that they could get tested as well.

‘But some of them were so angry,’ he said.

‘Even my seat in office has been changed. I want to feel normal but the social boycott hurts.’

Local media have reported incidents of returning migrant workers being barred from entering their villages by barricades set up on the outskirts with signs like ‘Outsiders not allowed’.

Authorities have inadvertently done their bit with quarantine stickers outside the homes of infected people and putting ‘danger ahead’ signboards in containment zones.

Ajay Kumar, another recovered coronavirus patient, said neighbours have stopped their children playing with his.

‘In my (neighbourhood) they are not even allowing the domestic help to work at my place. It makes me so sad and angry at the same time,’ Kumar said.

‘The disease did not kill me but the discrimination will.’