Thousands of police officers guarded the world’s biggest statue ahead of its inauguration by Indian Prime Minister Narendra Modi on Wednesday, anticipating protests by angry locals displaced by the enormous figure.

Indian authorities have planned a spectacular opening of the 182-metre (600-foot) tall tribute to Indian independence hero Sardar Vallabhbhai Patel, with Air Force jets and helicopters to shower flowers on the statue during a flypast.

But officials in Gujarat state are worried that community groups could stage protests to demand compensation for land taken to erect the Statue of Unity, which cost 29.9 billion rupees ($400 million) and has taken nearly four years to build.

“More than 5,000 police personnel have been deployed at various points in the 10 kilometre radius of the statue site,” said Narmada district police inspector general Abhay Chudasama.

“Police patrolling has been intensified in the wake of protests by the local tribal community and leaders. Drones and helicopters will be keeping watch on the entire area,” he told reporters.

There was a heavy police presence around the land where families from the statue zone were moved, and local sources said several activists had “gone underground”.

Posters of Modi with Gujarat chief minister Vijay Rupani were torn down or had their faces blackened at the weekend. The chiefs of 22 villages around the statue signed an open letter calling on Modi to stay away from the inauguration.

Local legislator and community group leader Chotu Vasava reaffirmed a threat to stage protests on the eve of the ceremonies around the statue of Sardar Vallabhbhai Patel, who played a key role in unifying India after its independence in 1947.

“Tribals have been exploited by different governments, the ruling BJP (Bharatiya Janata Party) is repeating it again,” Vasava said, vowing to continue protests. 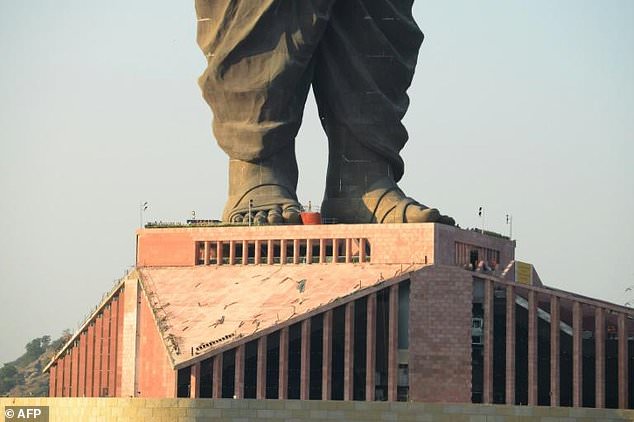 “I am not against Sardar, but what is the use of the statue if the people on the land have to suffer and are moved from their homes?”

More than 80 percent of the local population are from tribal groups with special protected status.

The Gujarat government said the 185 families moved to make way for the statue had been compensated and given 1,200 acres (475 hectares) of new land.

Modi, whose nationalist government has made the statue one of its flagship projects ahead of a national election next year, arrived in Gujarat’s main city of Ahmedabad on Tuesday night.

He is to pay tribute at the foot of the statue of Sardar, who has become a hero for nationalists.

Gujarat government chief secretary J.N. Singh said that dance troupes from across India would perform at the inauguration.

“Air Force planes and helicopters will shower flowers on the statue during the unveiling,” he told reporters.

The statue is more than twice the size of New York’s Statue of Liberty and also dwarfs the 128 metre (400 feet) high Spring Temple Buddha in China, the world’s next-biggest statue.

Online booking to visit the Statue of Unity has opened with a 350 rupee ($4.75) admission fee for the 153-metre-high observation deck.

Indian authorities hope the statue will attract 15,000 visitors a day to the remote corner of Gujarat, which is about 100 kilometres (60 miles) from the nearest big city of Vadodora.