Australian ODI captain Aaron Finch was left furious at former test skipper Steve Smith after a mix up at the crease led to a run out.

Finch had gotten off to another hot start in the third ODI match against India at the M Chinnaswamy Stadium in Bengaluru.

After helping to guide Australia to a dominant win in the first match with an unbeaten 110 followed up by a 33 in the second match, Finch was again looking to be aggressive.

The Australians were already one wicket down with 46 runs on the board when Smith was facing a ball from Indian pace bowler Mohammed Shami.

The former skipper pushed the ball to backward point and put his bat up to say ‘no’ in the mix-up. 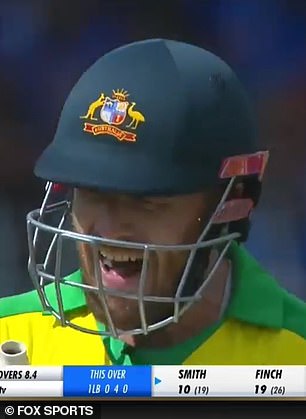 However he advanced a few steps down the wicket after hitting the ball just to the left of Ravindra Jadeja at point.

Finch continued to run as Smith stuttered before deciding to stick to his end as Finch ran from his field of view and toward the same end.

Smith turned and dived to make his ground, leaving Finch stranded and run out by half the pitch to leave Australia at 2-46.

An angry Finch yelled profanities in Smith’s direction as he walked past him leaving the ground, with Smith appearing to reply ‘I called no’.

The commentators were stunned by the mix up with one calling it a ‘shellshock’ moment for the Aussies.

‘You don’t normally see that reaction from Finch but it was there.’

An added wrinkle to the run out was Finch saw his ascendancy to captain after Smith was banned from the game for a year after the ball tampering scandal in South Africa.

It capped off a poor start for the Aussies, who had already lost David Warner for three after batting first in game three.

The team went on to score a healthy total of of 286 after Smith was able to compose himself and go on to score his eight century in the one day cricket format.

Smith made 131 and put on 127 runs for the third wicket with Marnus Labuschagne to lay the foundation for Australia’s total after they elected to bat in Bangalore.

Smith followed up his 98 in the second match with his ninth ODI hundred and his first since January 2017, a period during which he served a one-year ban between March 2018 to 2019.

Indian players wore black armbands to honour the country’s most economical bowler, Bapu Nadkarni, who died in Mumbai at the age of 86 on Friday. 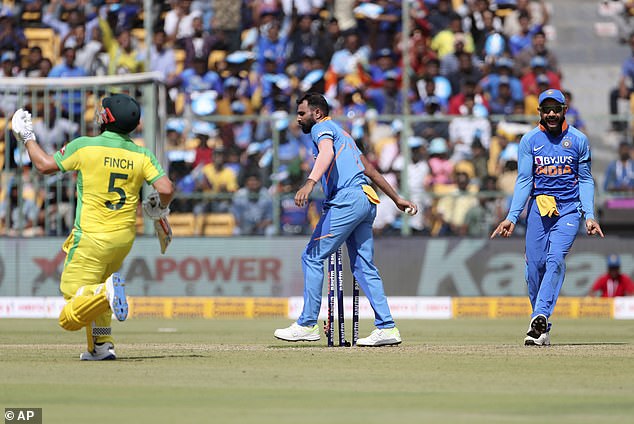