Indian-American, 20, becomes the first turban-wearing Sikh woman in the NYPD

An Indian American, 20, has become the first turban-wearing Sikh woman in the New York Police Department.

There are currently about 190 Sikh police officers in NYPD, 10 of whom are women.

But since turbans were first allowed to be worn by recruits in December 2016, Kaur is the first woman to do so.

‘People haven’t seen anything like that. It’s great because it gives me an opportunity to tell them what’s behind the turban, educate them. That’s how we love one another,’ she added.

Kaur said that she  hopes her presence on the force can bring visibility to the Sikh community and will help locals learn more about her culture.

The Sikh Officers Association of NYC tweeted a photo of Kaur and its board members at the graduation ceremony on May 16. 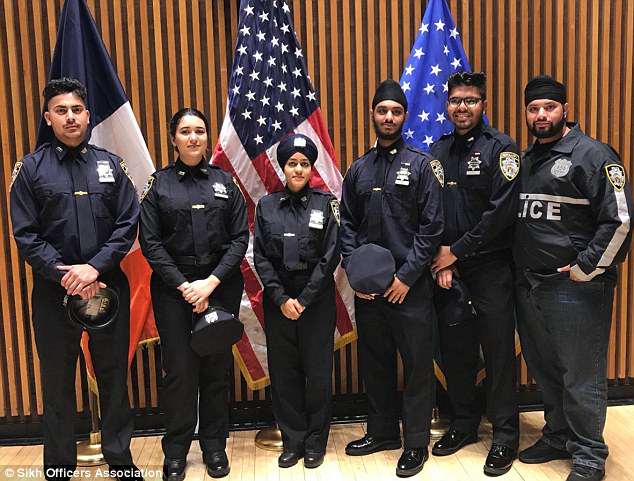 Kaur is also in her second year at Nassau Community College where she studies accounting.

She is currently an auxiliary officer and hopes to become a full-pledged police officer in the NYPD.

However, she is already hitting the pavement and policing the streets.

‘We are the eyes and ears of the community,’ she told Desi Talk. ‘I go on parades, am controlling traffic, making sure everybody is safe.’

She displays the policing symbol in the front of her blue turban – something that was just allowed in 2016 after a long struggle by the Sikh community.

‘Auxiliary Police Officer Kaur’s accomplishment by joining NYPD Auxiliary has been ground breaking. She will be joining the largest Auxiliary Police Program in the United States. Delare Rathour, NYPD officer and vice president of the Sikh Officers Association, told HuffPost.

‘Officer Kaur will make all Sikhs around the world proud! By the community seeing officer Kaur wearing a turban and in uniform they will feel nothing but pride, seeing one of their own serving her community,’ Rathour added.

Kaur said her parents are proud as well as overwhelmed with the support they are getting for their daughter’s accomplishment.