Indian boy is going blind due to his protruding eyes

These heartbreaking pictures reveal the plight of a two-year-old boy with protruding eyes who is slowly losing his eye sight because his parents are too poor to afford medical treatment.

Jailian Kaipeng is in ‘constant pain’ and may be suffering from a rare disorder that inflames his eyes or even a type of children’s eye cancer.

But there is little hope of his suffering being alleviated because his labourer father earned just Rs 150 (£1.70) a day and is now jobless.

Jailian was born a healthy baby but his eyes began to swell when he was just two months old.  His condition now pushes his eyes forward so much that the lids of his eyes cannot even close.

His mother Chengmaite, 25, from a remote village in Tripura, north eastern India, said: ‘All the doctors have said we should take him to the big hospitals but they are beyond our affordability.

‘People stare at him and are shocked by his condition which breaks my heart. All we can do it wait for a miracle to happen. We are in desperate need of help.’ 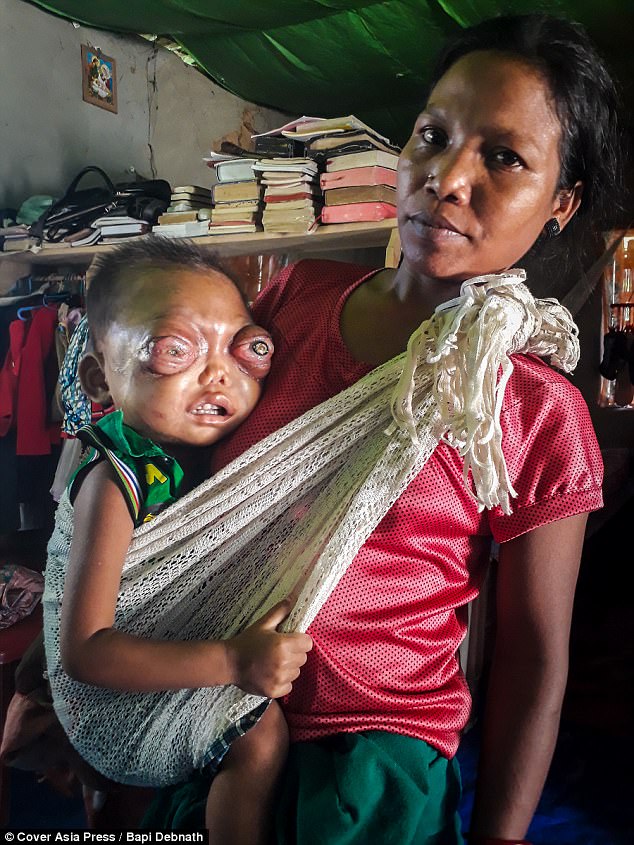 Jailian’s father, Neirbanglal Kaipeng, 28, said explained that his son’s right eye started swelling a couple of months after his birth.

‘A red line would appear and disappear on his eye ball and it would cause his eye to swell,’ he said.

‘We were very shocked when we first saw it, we had no idea what to do, or who to turn to.’

The family consulted local doctors but none could diagnose his condition.

‘We took him to see our local doctors,’ Neirbanglal said. ‘But they were baffled. They gave him some medicines and sent us home but his eyes just got worse.’ 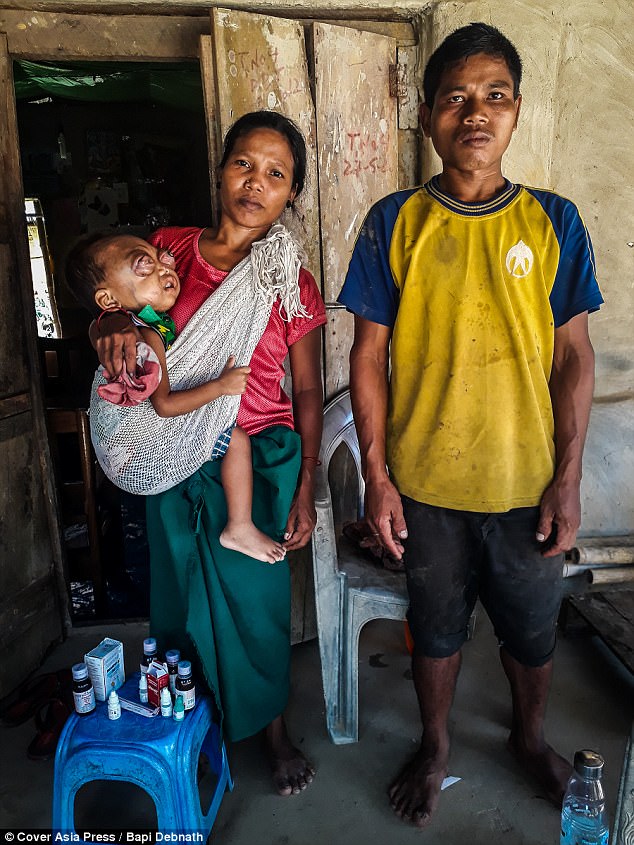 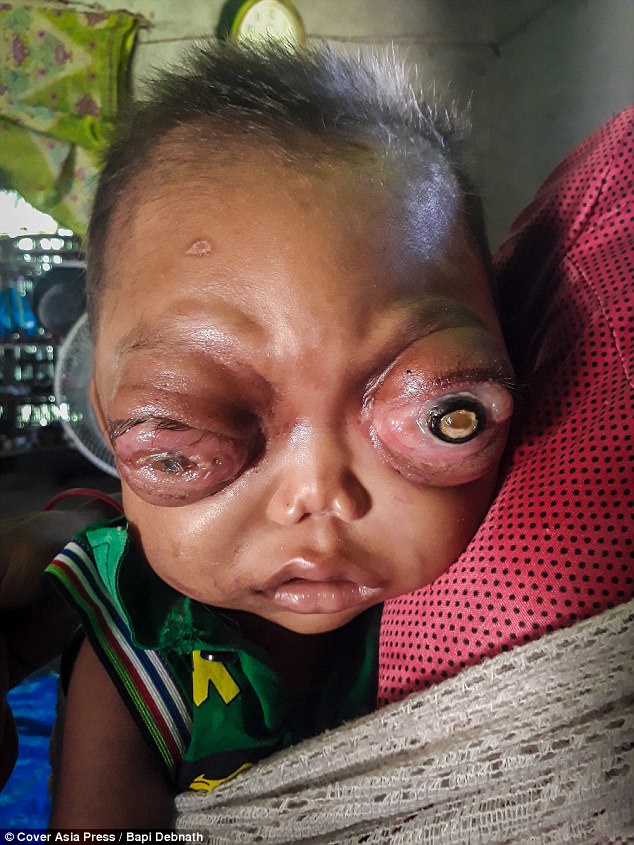 Eventually the condition spread to his left eye and the swelling became permanent.

For the last two years his parents have watched helplessly as their baby’s condition worsened.

It is suspected that Jailian may have orbital pseudotumour, which is the inflammation of the eye muscles or even worse he has a type of eye cancer called retinoblastoma.

Bu without consultations with experts and tests, no one can be sure.

We sat there staring and crying

But Jailian’s condition continued to worsen and the family have not been able to afford the best care – and have now lost their home.

‘We were shocked and helpless by the visibility of his condition. I had no idea where to take my son,’ said Neirbanglal. 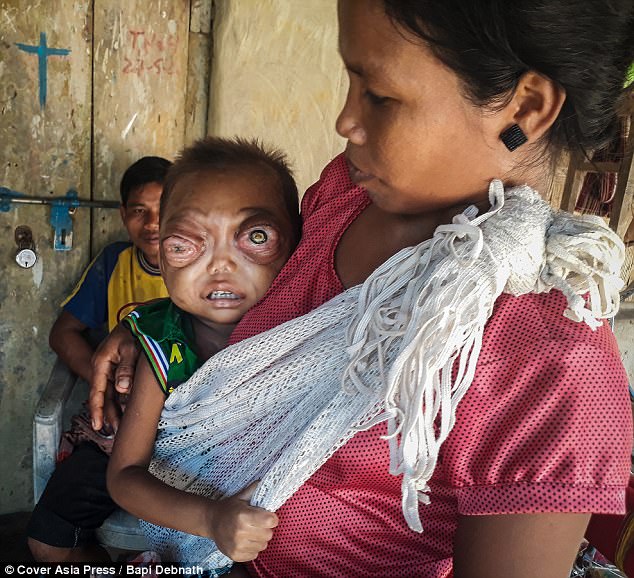 Retinoblastoma is a rare type of eye cancer that can affect young children (usually under five years of age).

If it’s picked up early, retinoblastoma can often be successfully treated. Cchildren treated for retinoblastoma diagnosed at an early stage have a survival rate of more than 95 per cent.

Retinoblastoma can either affect one or both eyes.

If it affects both eyes, it’s usually diagnosed before a child is one year old.

If it affects one eye, it tends to be diagnosed later (between the ages of two and three).

In about 4 out of 10 (40 per cent) of cases, retinoblastoma is caused by a faulty gene, which often affects both eyes (bilateral).

The faulty gene may be inherited from a parent, or a change to the gene (mutation) may occur at an early stage of the child’s development in the womb.

It’s not known what causes the remaining 60 per cent of retinoblastoma cases. In these cases, there’s no faulty gene and only one eye is affected (unilateral).

‘We do not have that kind of knowledge or know how best to help him.

‘We had no money to take him to the city hospitals. But we wasted time, just sitting and staring at him all day, crying.

‘And in that time we could see his eyes getting worse.’

Eventually, the family – including Jailian’s brother Ringdamte, 10, and nine-month-old sister Naote –  had to leave their rented accommodation and move in with Chengmaite’s parents.

A nearby Christian Missionary helped the family see a doctor in July who diagnosed his condition as orbital pseudotumour.

But no treatment was carried out and experts say the boy needs a second opinion and a biopsy to rule out cancer.

Neirbanglal said: ‘There’s a Christian missionary near my in-laws’ house so we asked them for help and they kindly found us a good doctor.

‘The doctor has given my son’s disease a name but he’s done nothing else because we have no money. We have no idea what it is, whether it can be cured or what to do next, we’ve had no guidance.

‘I have no idea how long we can stay here. I am now jobless as we’ve had to move home.

‘My wife is always crying. We can’t sleep for worrying about him. It has started affecting our health too.’

Dr Shashidhar Tatavarthy, a paediatric at Artemis Hospital, in Delhi, said: ‘We need to do a biopsy immediately to confirm the condition and differentiate it from a malignant tumour.

‘The boy has not lost his sight yet but if he’s left untreated any longer he could lose his sight completely.

‘It is extremely rare to have this condition in a child of two years old. Surgery would be very complex but essential. This child needs immediate attention and treatment.’

Neirbanglal added: ‘It is devastating to see my child suffering like this. He cannot see properly and it kills me to see him like this.

‘I am possibly the most useless father who is not able to help his son.’

Due to the amount of donation requests, press agency Cover Asia Press has set up a donation page to raise money for Jailian’s cause here.