Indian girl has a large facial tumour removed from face

A teenage girl who was abandoned by her parents because of a large facial tumour finally has it removed in a life-changing seven-hour operation.

Simaria Singh, 15, who was left partially blind in her left eye, is thought to have suffered from either meningoencephalocele or a dermoid cyst.

As well as enduring agonising pain, Simaria was forced to live as an outcast, with people refusing to even eat next to her.

After being found begging on the streets by the children’s rights activist Rajesh Shukla, 43, last December, Simaria was admitted to Bombay Hospital in Indore where doctors removed the tumour, which weighed 0.6lb, in a £1,700 surgery they performed for free on January 16.

Mr Shukla said: ‘This is [nothing] short of a miracle. She is extremely happy and the first question she asked me was if she can get married now.’

Simaria’s family hope the teenager, who is due to be discharged from hospital in 10 days, will return to their home. 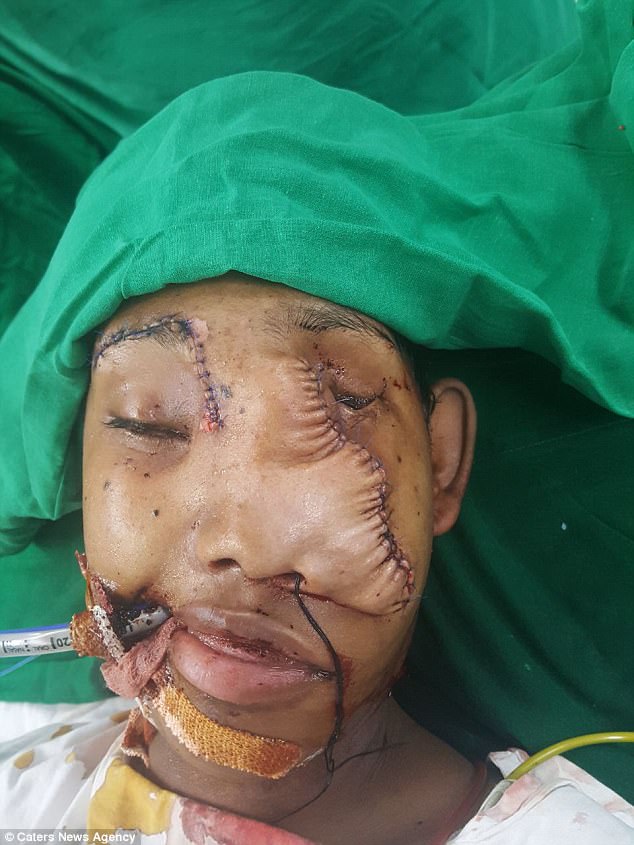 In a seven-hour operation, doctors removed the tumour in a £1,700 operation they did for free 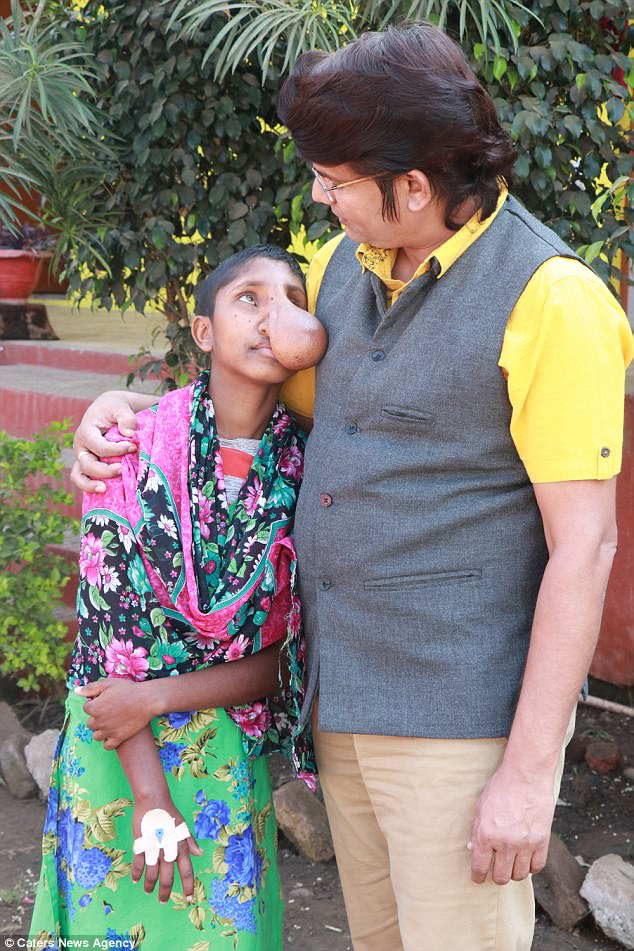 Meningoencephalocele occurs when a sac of fluid, brain tissues and the organ’s surrounding membranes protrude through a defect in the skull.

Its cause is unknown but may be linked to exposure to toxins during pregnancy, as well as folate deficiency.

Treatment depends on the meningoencephalocele’s size, location and severity but usually requires surgery.

Sufferers may have reduced intelligence after the procedure.

‘She will lead a healthy life now’

Dr Prashant Newalkar, a neurosurgeon at the hospital, said: ‘We are still waiting for the reports but it seems she was suffering from a congenital condition wherein her skull had a defect and the fluid from the brain started leaking through [the] nasal cavity and [a tumour] formed at [the] frontal and nasal bones.

‘It is a congenital condition and early detection during pregnancy is possible but [it] looks like, in her case, her mother did not undergo [an] ultrasound [scan].

‘We performed the surgery in which we closed the defect in the skull.

‘The success rate is very high in such surgeries with only [a] one per cent chance of recurrence but we are hopeful that she [will] lead a healthy life now.’

Simaria is expected to require more surgery to further correct her facial disfigurement and help restore her vision. 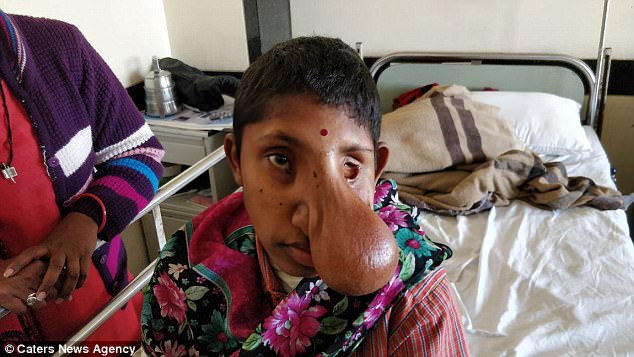 Simaria was forced to live as an outcast, with people even refusing to eat next to her 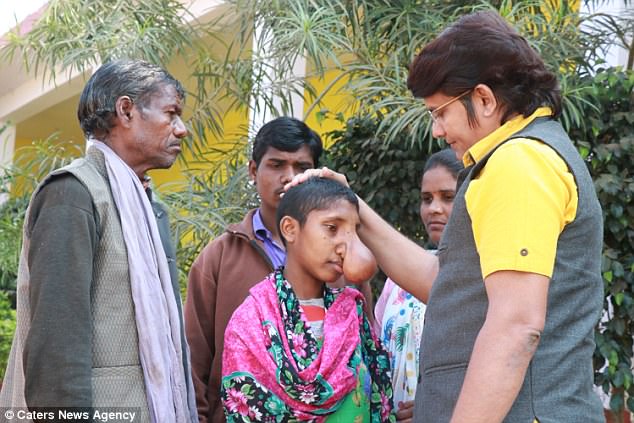 WHAT IS A DERMOID CYST?

A dermoid cyst is a non-cancerous tumour that can occur anywhere on the body and is made up of skin cells, hair follicles and sweat glands.

They are caused by skin becoming trapped during foetal development.

Dermoid cysts most commonly occur on the face and feel like a firm, dough-like lump.

Around 40 per cent of the time they are present at birth.

‘The girl was deprived of love and care all her life’

Simaria was found by Mr Shukla in Khandwa, Madhya Pradesh, on December 21.

Shocked to see her condition, Mr Shukla, who works closely with the children’s home Bal Sakha Ashram, contacted local doctors and offered to pay £600 for her surgery.

Speaking of her transformation, he said: ‘This is [nothing] short of a miracle. She is extremely happy and the first question she asked me was if she can get married now.

‘The girl was deprived of love and care all her life.

‘She was compelled to leave her home in October due to constant taunts by her parents. For two months she was begging on [the] road for food.’

After taking her to the children’s home, Mr Shukla said: ‘The first night we kept her in a separate room so [as] not to scare [the] other kids but [the] next day, we counselled her and found out that she was abhorred by her own parents.

‘She was so dejected with neglect all her life she was forced to leave her house.’ 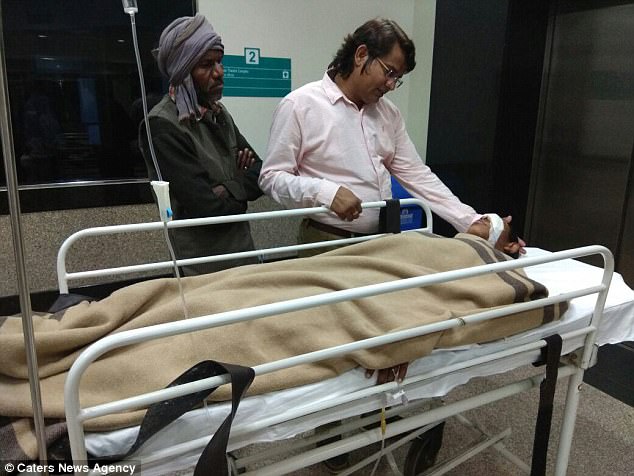 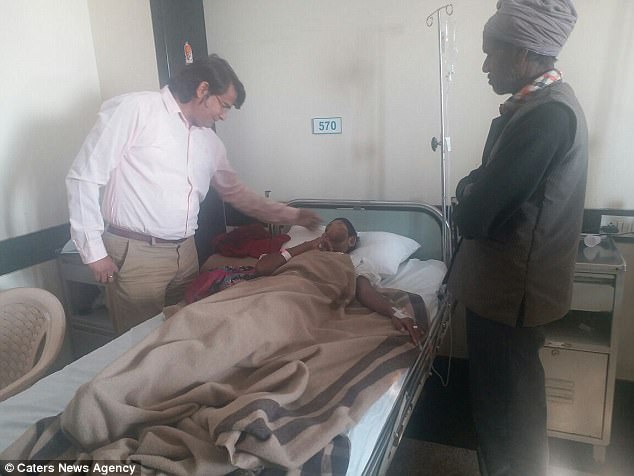 Her parents want her to come home, however, Simaria is being left to make her own decision

‘The parents are more than happy to take her home’

Mr Rajesh has been in touch with Simaria’s parents and is hoping they will take her back.

He said: ‘The family is extremely poor. Her father, Jagannath Singh, is [a] daily-wage labour and her mother, Mudra Devi, is a housewife who looks after their other seven children.

‘Her father told us how he had no money to treat his daughter and would often feel pity on her.

‘But now the parents [are] more than happy to take her home. However, we are hoping to keep Simaria with us until she gets completely well and then we will leave the decision [up to] her.

‘If she wishes to continue living with us, the [children’s home will] happily accept her.’