An Indian teen has told of how she attempted suicide for fear someone was going to murder her mother after taking part in the deadly ‘Blue Whale’ online ‘game’.

The 17-year-old girl was pulled out of a lake after jumping off a cliff in Jodhpur, Rajasthan, having carved a whale into her arm before trying to kill herself.

The lethal Blue Whale ‘game’ involves 50 tasks in as many days, aimed at ‘creating psychologically traumatising situations’, ending with suicide.

Terrifying: The 17-year-old had been made to carve a fish – representing the Blue Whale – into her arm and been told that if she did not commit suicide, her mother would die

Blue Whale has been linked to more than 100 deaths of young teenagers around the world since it originated in Russia in 2015.

Participants join a ‘group’ where the tasks are set by a group ‘administrator’ and can range from watching horror movies to waking at strange hours, and eventually progresses to self harming.

As in the case of the 17-year-old from Jodhpur, many are told their loved ones will be hurt if they do not carry out the tasks. On the final day, participants are told to commit suicide.

The girl’s parents had reported her missing on Monday after she failed to return from a shopping trip.

A caretaker of a local park spotted her near a lake at around midnight on Monday.

‘She was crying. I realised she was going to jump into the lake,’ witness Om Prakash told NDTV. 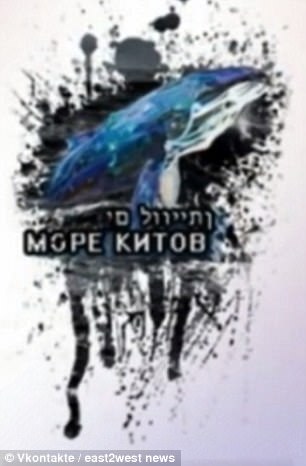 ‘I ran behind her and tried to stop her. I started talking to her and asked her what’s the matter, she said “my mother will die”.

‘She said her game was nearing the end and if she did not complete her task her mother would die.’

By the time the teenager jumped, police had arrived at the scene and she could be pulled out of the water.

Deaths of children and young adults from around the world have been linked with the sinister Blue Whale game,  including three young people in the United States, five in India and around a dozen in Brazil.

In Russia, some 20 suicides have been officially linked to the game, but politicians and the media have suggested the figure runs into the hundreds.

Russian newspaper Novaya Gazeta alleged that of 130 suicides of children in the country between November 2015 and April 2016 almost all were ‘members of one group or other on the internet’.

In July, the the 22-year-old Russian man accused of being the ‘inventor’ of the game was jailed for three years and four months in July.

Philipp Budeikin who also went by the name Philipp Fox, had  been linked to 16 ‘Blue Whale’ suicides in different regions of Russia, and had been reported as a key mastermind of the social media craze.

However, his conviction was only related to two of the more than 17 cases he confessed to being involved in.

During the investigation, Budeikin branded victims of the game as ‘biological waste’ and told police that they were ‘happy to die’ and he was ‘cleansing society’, said investigators.