An Indian girl has locked herself away from the world because her cheeks and chin have swelled to an ’embarrassing’ size.

Suman Kumari, 17, from a slum in Delhi, has seen her face slowly become disfigured – but doctors are baffled as to why it has happened.

Her swollen face has caused her problems chewing, left her voice raspy and also causes her to struggle to see clearly.

Suman left school last year after being bullied relentlessly by cruel children and the recluse has not left her house since.

Her own heartbroken mother is desperate for her daughter to undergo life-changing surgery in order to find a husband who will look after.

Suman Kumari, 17, from a slum in Delhi, has seen her face slowly become disfigured – but doctors are baffled as to why it has happened

Suman said: ‘I feel embarrassed by the way I look. I hate to see myself in the mirror and I know nobody likes to look at me.

‘I know I’ll never be a beautiful bride and get married; nobody would want to marry me. People want attractive girls today.

‘There is nobody who would accept a girl like me. I do get upset sometimes but I do not blame anyone for my condition, I guess it’s my destiny.’

But Suman, who was born normal – just like her three siblings, dreams of the day she can live a normal life like others.

Hoping for a miracle

She said: ‘I want to undergo surgery to treat my face but I know we can’t afford it. I can only hope for a miracle.

‘I have faith in God; I believe a simple miracle cold change my life forever.’ 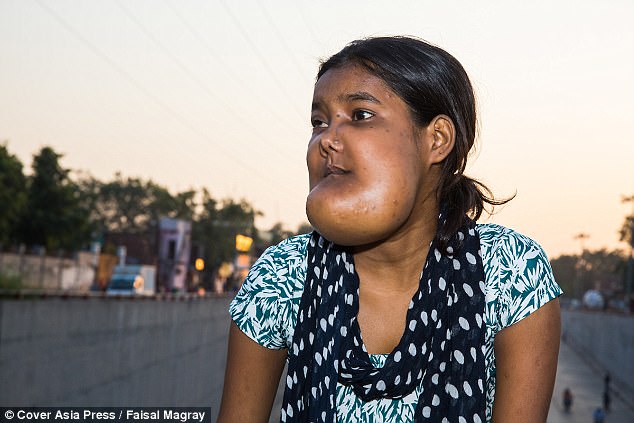 Her swollen face has caused her problems chewing, left her voice raspy and also causes her to struggle to see clearly

Her father Dalbir Singh, 51, and mother Meena Devi, 42, noticed changes to her face after she celebrated her 10th birthday.

I feel embarrassed by the way I look. I hate to see myself in the mirror and I know nobody likes to look at me

Meena, a housewife, worries about Suman’s future. She said: ‘I want someone to help my daughter. I want my daughter to have a future.

‘I want her to meet someone and get married but I don’t know it will never happen. Look at her! Who will marry her?

‘She doesn’t even go out; people tease her and make fun of her. I wish a doctor could treat her, or perform surgery or help her get better.

‘We will treat him like God if this happens.’ 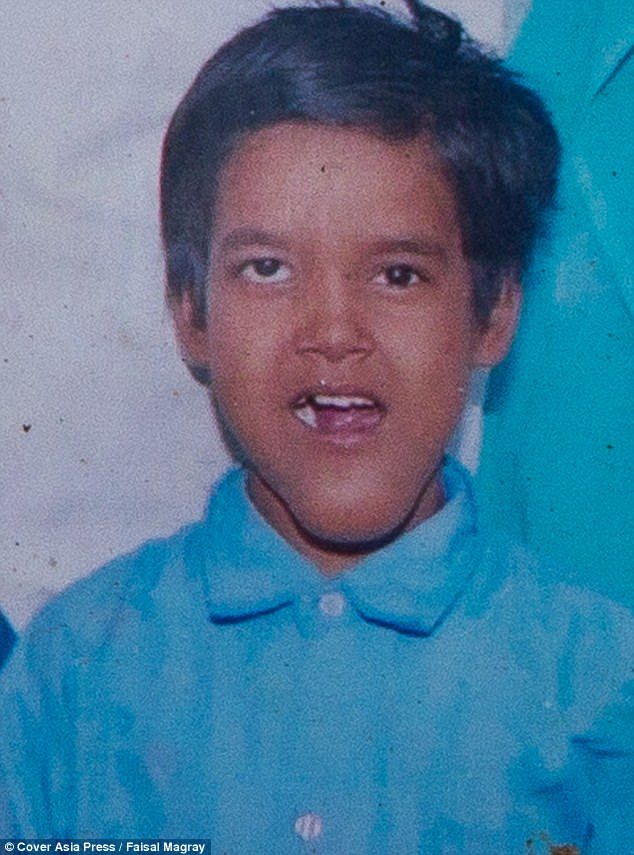 IS SURGERY A POSSIBILITY?

Dr Kuldeep Singh, a plastic surgeon at Indraprastha Apollo Hospital, in Delhi, met with Suman but admits he couldn’t do anything to help.

He said: ‘She was examined by our oncology team who found out that her condition was not related to any type of cancer.’

Dr Singh referred her to a craniofacial surgeon in Chandigarh – 152 miles (254km) away who could possibly treat her.

Father Dalbir, who works as a security guard at a private firm and earns Rs 8,000 (£92) a month, is unable to cope up with the financial pressure.

He said: ‘I’ve done what I could. I have a big family to look after and taking her to Chandigarh and getting surgery would be a costly affair.

‘I cannot afford that and this is why we never went for further treatment.’

Suman’s condition started with minor swelling on her face.

Various hospitals offered treatment, but the poverty-stricken family were unable to afford any potential procedures.

They took a piece of skin from her chin and conducted blood tests – but doctors were unable to diagnose her with a condition.

The swelling has became worse over time. Meena added: ‘It is heartbreaking to see my daughter like this.

‘I see other girls in our area and it is devastating to see my child locked in her house as she feels embarrassed to face anyone.

‘The swelling is growing with age. Now, she cannot open her mouth completely so eating food is painful.

‘She can talk but her voice is not clear. It is affecting her eyes also. She cannot see properly in one eye, which is slowly closing as the skin is moving upwards.’

Suman, who wanted to become a doctor once, left school last year due to bullies in her school and has not left her house since.

She said: ‘They all made fun of me. None would come close to me or ever sit with me and I could never make friends.

‘Everyone taunted me and said “look at her face”, “she looks so funny” and it was humiliating to hear such comments every day so I decided to quit my studies.’