A northern Indian town plans to sterilise a thousand monkeys after a spate of attacks left some locals too scared to leave their homes.

The forest department in Almora city has established a sterilisation centre at the city zoo, where so far at least 92 monkeys have been sterilised, local media claims.

Department officials have said they aim to sterilise a total of 1,000 monkeys this year at the centre, based at Almora Zoo.

At least 40 new cages will be installed to cope with the numbers while a vet will be employed to reach the ambitious goal.

Authorities want to sterilise 1,000 monkeys this year in an effort to curb the area’s burgeoning monkey population

The move comes as local media reported there was a rise in the numbers of those who have been injured by monkeys in the area.

Kamlesh Singh, a resident of Dugalkhola told the Times of India the monkeys had become a menace in the city.

‘Children fear venturing out of their homes due to the fear of monkeys,’ he said.

‘Even adults are being attacked. So we back the initiative, but the authorities must speed up the process to provide immediate relieve to the city residents.’

The large number of monkeys in the area has been posing issues for local residents for some time, with reports of an influx in the creatures leading to them raiding crops and in some cases attack humans in their hunt for food.

Two years ago, the Hindustan Times reported hundreds of locals took to the streets to express their frustration over the monkey situation and demand the authorities do more.

The protest lasted a fortnight, with some locals even threatening to fast if no solutions to the burgeoning monkey population were proposed.

‘The (forest) department claims it is helpless. Monkeys have made our lives hell; they have become a routine problem, so much so that we can’t even hang our clothes. They steal them,’ Pushpa Sati, secretary of an Amora-based women welfare organisation, said at the time of the protest.

Other locals were fearful for their crops, as the hungry monkeys raiding their crops and left them with little to sell, or even eat. 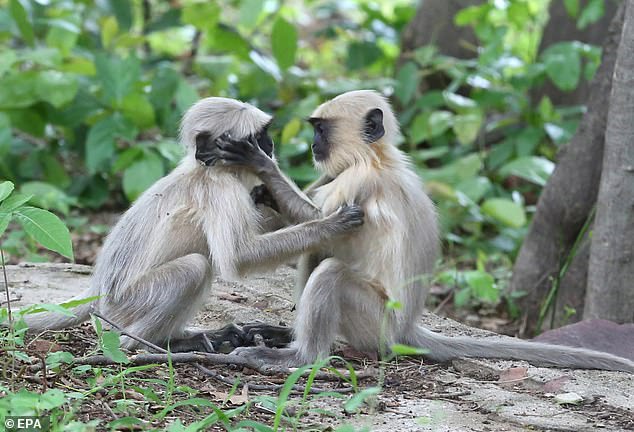 It’s thought that the number of monkeys in the area had multiplied as a result of the national forest department releasing monkeys, caught in nearby towns, into the forests of the hill districts

Meanwhile, visitors to the area have also expressed their fears of the monkey, with a number warning people on travel platform Trip Advisor of the risk from the feisty creatures, who won’t hesitate to steal food from visitors’ hands.

‘You need to be beware of monkeys as they hunt for food. My wife and daughter became victim there but we only lost some chips and other food,’ wrote one man on the travel platform.

Another pleaded for the local authorities to do more to curb the monkeys’ actions.

‘The only thing the government and the custodians have to do is to control the terror of monkeys who snatch everything from the devotees, and sometime also end up biting the devotees.’

It’s thought that the number of monkeys in the area had multiplied as a result of the national forest department releasing monkeys caught in the nearby towns into the forests of the hill districts.