An accused child molester, whose mugshot has drawn comparisons with the sketch of the suspect in the 2017 murder of two teenage girls is a ‘weirdo who liked to hang out in the woods’ and is ‘very violent’, according to relatives.

Eldridge had a sexual conversation on social media with a detective who was posing as a 13-year-old girl, Randolph County Sheriff’s Office said.

When his mugshot was released after his arrest members of the public inundated Indiana authorities with calls pointing out a comparison between an FBI composite sketch and the suspected pedophile’s mugshot.

Now the grandparents of Eldridge’s ex-wife, Erin, have exclusively told DailyMail.com that they have long seen a comparison between Eldridge, who is known as Andy, and the FBI sketch from the Delphi murders.

Donna Clack, 76, said: ‘When we saw that picture on the news, we said that looks like Andy. We placed [the sketch] with Andy before this.’

Her husband Robert, 77, described Eldridge as ‘weird’. ‘He was totally different, he was always talking about guns,’ he said.

Charles Andrew Eldridge, 46, of Union City, Indiana, has been charged with one felony count of attempted child molestation and one count of child solicitation and is being held at the Randolph County Jail 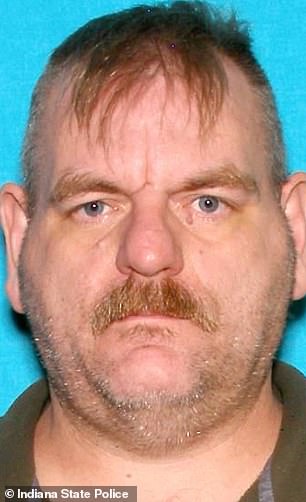 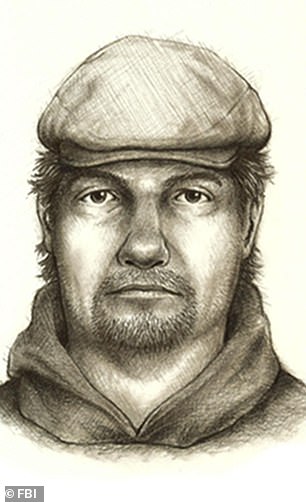 After his arrest, Eldridge’s mugshot (left) drew comparisons with the sketch (right) of the suspect in the 2017 murders of Libby German and Abigail Williams in Delphi

Randolph County Sheriff’s Department have raised a note of caution over suggestions that Eldridge is the Delphi killer, saying: ‘Although we understand that people are trying to help the investigation, by doing this with zero evidence other than a mere appearance, it can also hurt or hinder an investigation.’

However Indiana State Police, the lead agency in the Delphi investigation, said that they were aware of Eldridge’s arrest and will investigate to see if it is connected to the murders of Abigail Williams and Liberty German in February 2017.

Eldridge was arrested when he asked to meet up with the ‘girl’ at a location in Union City to engage to in sexual acts. When Eldridge arrived, he was met by law enforcement.

When he was arrested Eldridge admitted to officers that he had engaged in multiple sexual encounters with another child under the age of 13.

Eldridge has been charged with one felony count of attempted child molestation and one count of child solicitation and is being held at the Randolph County Jail.

The Clarks told DailyMail.com disturbing details of Eldridge’s past.

The couple, who have been married for 60 years, are the guardians for Eldridge’s 18-year-old son. They also care for their granddaughter’s 13-year-old girl.

The great-grandmother said that Eldridge had shown little care for his son since he was a baby and has not financially supported him. Erin and Eldridge divorced when their son was young. 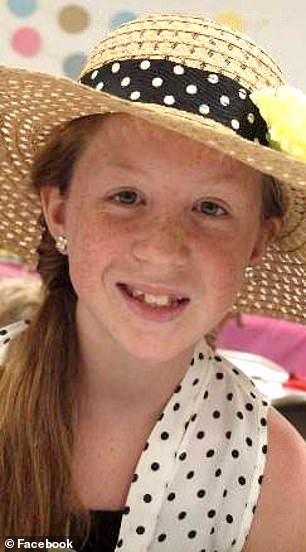 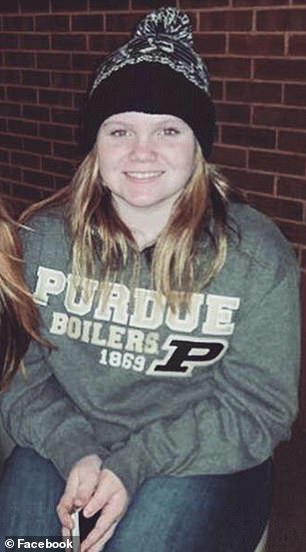 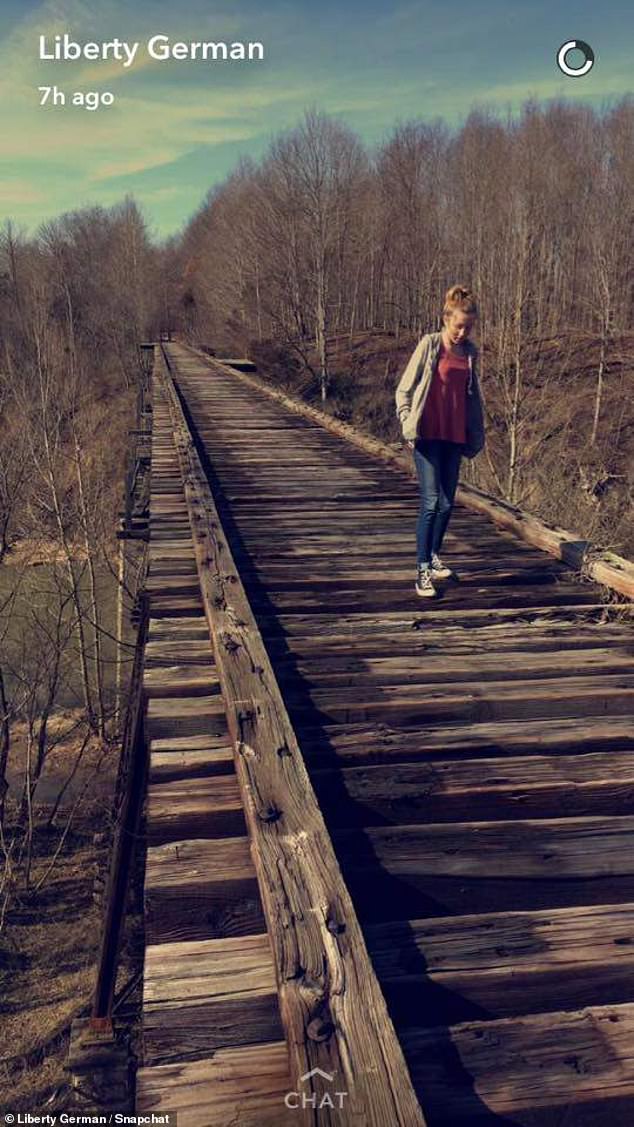 Libby had posted a series of photos from the bridge on her Snapchat on February 13. The two girls were found 24 hours after they went missing

‘Why our granddaughter ever married him is beyond me,’ Mrs Clack said. ‘When they were married, he would take the baby and put him in a room by himself, shut the door, turn off all the lights. He was only about seven months. He would cry and cry until he would throw up.

‘I found out about this and I said, you’re not keeping him anymore. I took care of him.’

Mrs Clack recalled a disturbing story about Eldridge exposing himself to a group of friends.

Mr Clack said that Eldridge was fond of spending time in the woods. ‘He was always out there, dressed in Army clothes.’

Mrs Clack said: ‘He would always go out and he wasn’t hunting. He would go in the woods and what he’d do, we don’t know. I never let any of the kids go with him. I never trusted Andy.’

The children’s mother is a drug addict, Mrs Clack said. Their daughter, Brenda Clarkson, 55, died from drugs in July 2017, they said.

The Clacks have taken care of their great-grandchildren for the past five years and are not entitled to state financial support.

Mr Clack, who retired last year after 40 years as a maintenance man, said that he had never known Eldridge to work.

Mr Jones’ ex-wife, Patricia, whom he divorced from in 2013, is Charles Eldridge’s sister. 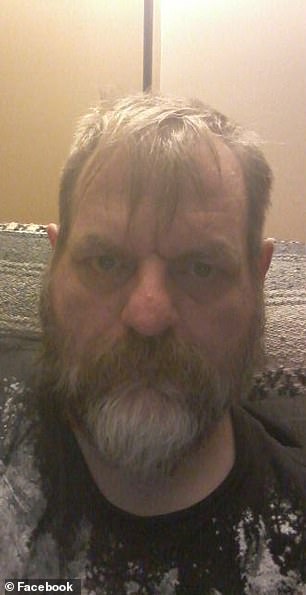 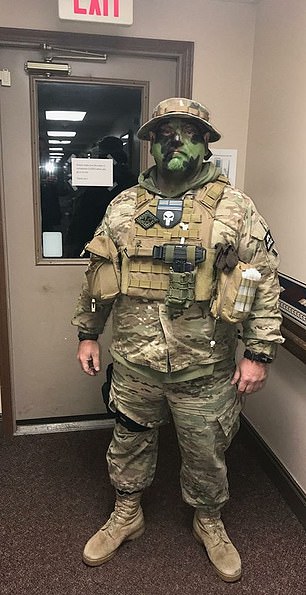 His ex-wife’s grandparents, who refer to him as ‘Andy’, described him as a ‘weird’ and said he was fond of spending time in the woods and always dressed in Army clothes 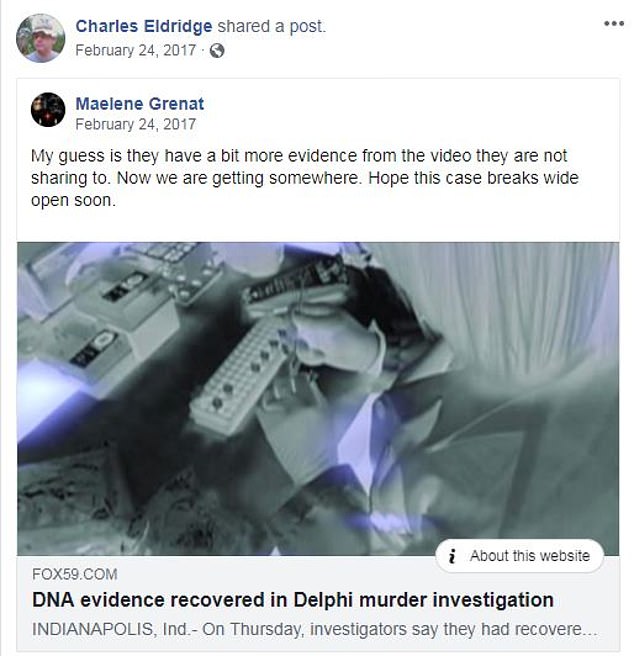 Eldridge had also shared several stories about the murder of Abby and Libby. In one post, he posted public appeals and a story about potential DNA evidence 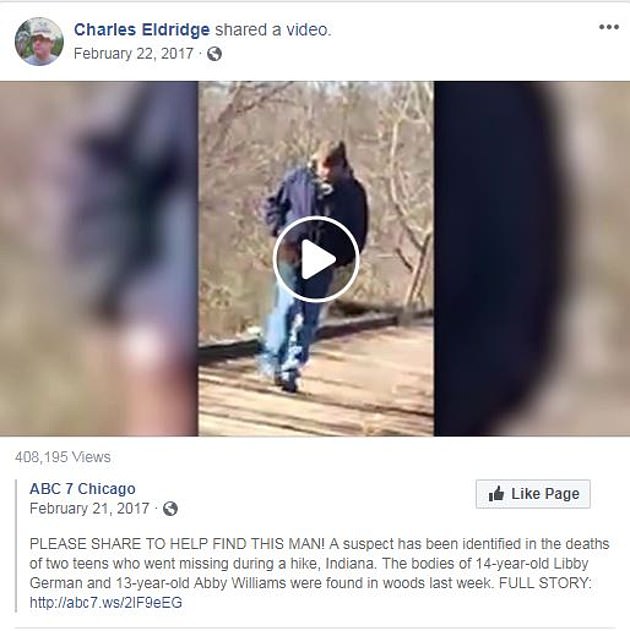 ‘He has a hell of a temper. I got in a fight with him about 15 years ago at his apartment.’

Mr Jones said that he had gone to Eldridge’s home because ‘at the time I was married to his sister. He threw her against the wall and knocked her out. Knocked her across the floor’.

He added: ‘He beat me down. I’ve got heart problems and he was beating me in the chest. I can’t say if he would kill someone or not but he’s very violent.’

Mr Jones said he was initially arrested over the fight but the charges were later dropped.

He described Eldridge as a short and stocky, ‘GI Joe wannabe’ who was always dressing up in army clothes. He said that Eldridge was ‘too darn lazy to work’ but that he was a ‘good artist’.

Randolph County Sheriff’s Office has shared their casework with the multi-agency team investigating the murders of Abigail Williams, 13, and Liberty German, 14.

The teens’ bodies were found on the Delphi Historic Trail half a mile upstream from the abandoned Monon High Bridge on February 14, 2017 – 24 hours after they went missing.

‘Once we get that phone call that, “Hey, we’ve made an arrest and we’re confirmed,” then I guess, maybe a celebration ain’t the right word, but a sense of relief that this guy’s been taken off of our streets,’ Patty told NBC.

Eldridge’s social media revealed him to be an outspoken Trump supporter who loves guns. 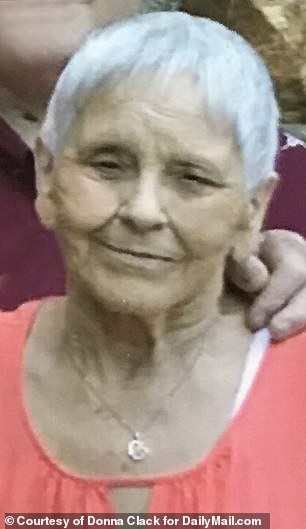 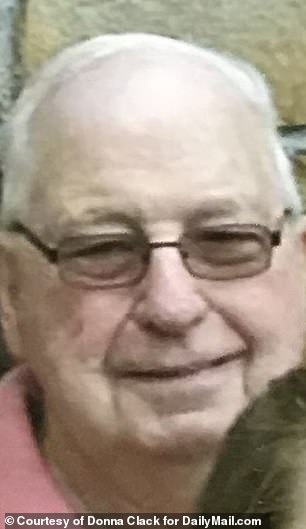 Donna, 76, and Robert Clack, 77, are the grandparents of Eldridge’s ex-wife Erin and are the guardians for his 18-year-old son. Donna told DailyMailTV she believed the sketch of the suspect looked like Eldridge 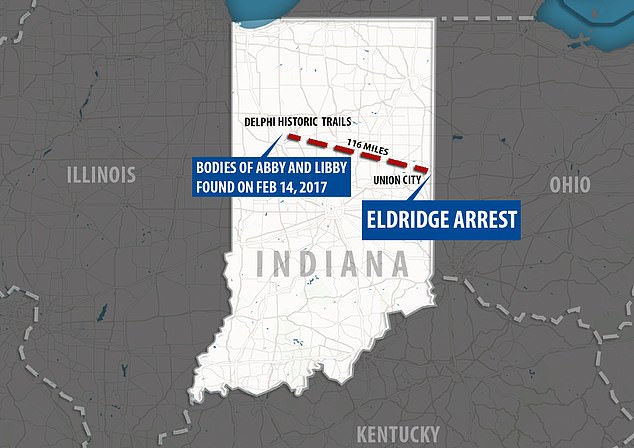 Eldridge was arrested in Union City, Indiana about 116 miles from where Libby and Abby were found dead almost two years ago

The suspected pedophile also has a second Facebook page with the Predator creature from ‘Alien V Predator’ as his profile picture.

Across the two social media accounts, he has shared hundreds of posts relating to murder, sex crimes, missing children and evasive killers.

Eldridge had also shared several stories about the murder of Abby and Libby.

He posted public appeals and a story about potential DNA evidence, as well as the sketch of the suspect the public believes he looks like, bearing the tagline ‘Pass it around. [He] Could be anywhere.’

He has also regularly shared gruesome images of a body being feasted on by vultures and bloody knives, tools and bone saws on a metal work-top.

Last April, he shared a post warning parents to be wary of flyers used by sex traffickers to lure in children.

The former security guard was arrested in Union City, Indiana around 116 miles from where Libby and Abby were found dead almost two years ago.

Their cause of death hasn’t been revealed by authorities.

In an FBI composite sketch of the murderer released in July the same year, the assailant is described as a white male between 5’6′ and 5’10’, weighing between 180lbs-220lbs, with reddish-brown hair.

Libby had posted a series of photos from the bridge on her Snapchat on February 13.

The teenager also managed to capture an audio recording of a man’s voice saying ‘down the hill’ shortly before her death.

Eldridge, a keen hiker, shared the recording along with a photo of a suspect walking along the bridge, which was captured on the same day the girls disappeared. 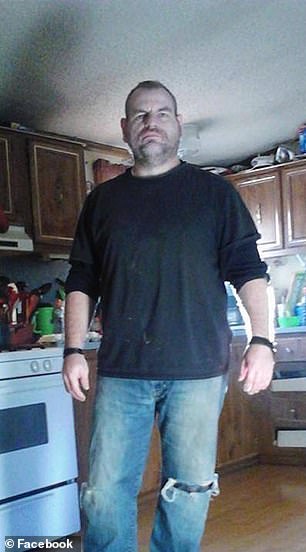 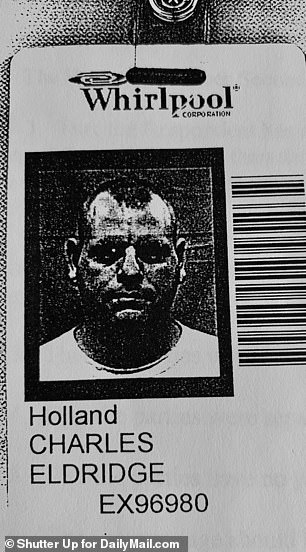 Eldridge was described as a short and stocky, ‘GI Joe wannabe’ who was always dressing up in army clothes. Pictured right is his work ID

The man depicted in the photograph seems to match the description given alongside the FBI’s sketch of the believed killer. After a number tips from the public likening Eldridge to the man in both the sketch and photograph, a statement was released by Indiana State Police.

‘It is important for the public and media to know that many similar tips and arrests of other persons alleged to be connected to the Delphi murders occur with some frequency in and outside of Indiana.’

‘Each tip – whether it receives media attention or not – is investigated for any connection to the Delphi case,’ said Capt. David R. Bursten of the Indiana State Police.

It continued: ‘The Delphi multi-agency investigative team, and participating agencies continue to receive media and public inquiries asking about the person arrested January 8, 2019, in Union City, Randolph County Indiana for allegations of sexually related crimes against children and if he is connected to the Delphi investigation.

‘The team is aware of this arrest and will investigate to see if there could be any connection to the murders that occurred in Delphi, Indiana on February 14th of 2017.’

Capt. David R. Bursten of the Indiana State Police insisted the police force do not speak specifically about ongoing cases, but he did disclose that there are no updates in the investigation just yet.

‘When an arrest is made of a suspect identified by the multi-agency investigative team as the alleged perpetrator of the Delphi Murders, rest assured, we will let everyone know,’ Bursten added. 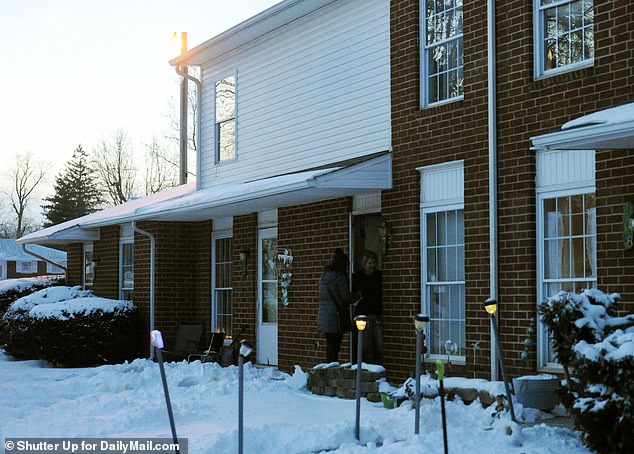 Police say in the year following the murders they received 11,000 individual tips from the public, with that number now said to have more than tripled.

Libby and Abby were eighth graders at Delphi Community Middle School when they were killed. Both girls played softball and were gearing up for spring practice before they died.

The murders shook Delphi, a small town of 2,877 people set amid farm fields of the Hoosier heartland, around an hour from Indianapolis.

Information can be reported anonymously; however, the Indiana State Police, the FBI, and the Carroll County Sheriff’s Department have announced a reward for information leading to the arrest of the person or persons responsible for the homicides of Liberty German and Abigail Williams. The amount of the reward may be up to $216,165 depending upon the value of the information provided.