Rachael Heffner, 26, from Indianapolis, Indiana, weighed 285lbs (20st 5lbs) at her heaviest, when she would drink up to four large bottles of fizzy drinks a day and gorge on fast food.

However, she was managed to turn her life around, losing half her body weight after overhauling her diet and exercise regime as part of her new year’s resolution.

Despite her impressive weight loss, she was left feeling embarrassed by the saggy excess skin left on her stomach, and decided to have surgery to complete her transformation.

The personal training director (pictured after surgery) has now spent $18,000 (£13,000) on surgery to remove the excess skin, and says she can’t wait to get into a bikini this summer 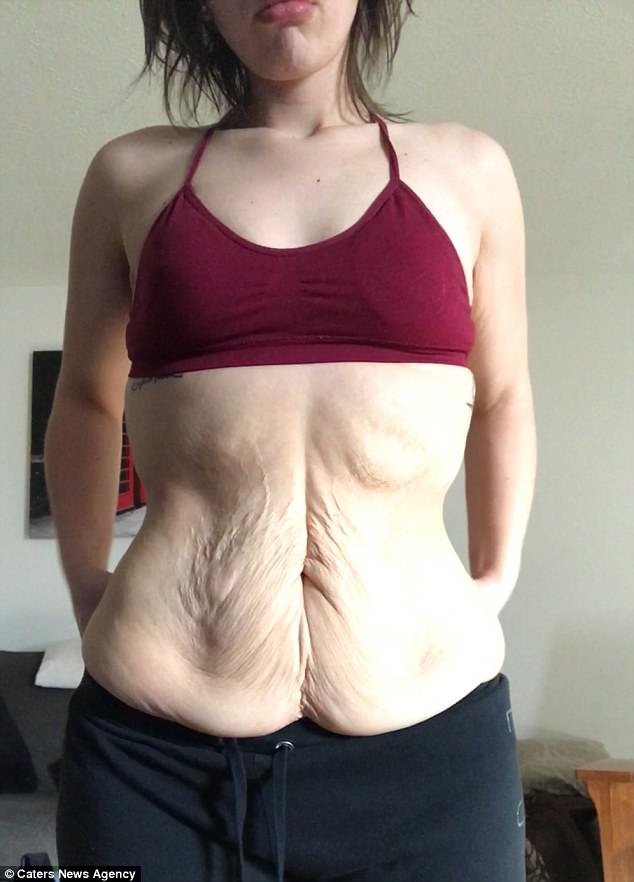 Rachael Heffner, 26, from Indianapolis, Indiana, says she was left feeling ‘depressed’ due to the 3lbs of excess skin (pictured) left hanging from her stomach after her dramatic weight loss

Rachael says she is delighted by her new physique and can’t wait to get into a bikini in the summer, having not worn won since the age of four.

The personal training director described how she had body image issues and was left feeling ‘depressed’ following her weight loss.

‘I used to have a lot of low hanging excess-skin that had been stretched out to the max around my lower abdomen from my extreme weight loss,’ she explained.

‘For everybody else, my excess skin represented the struggle and journey I’d been through, they thought of it as something positive. 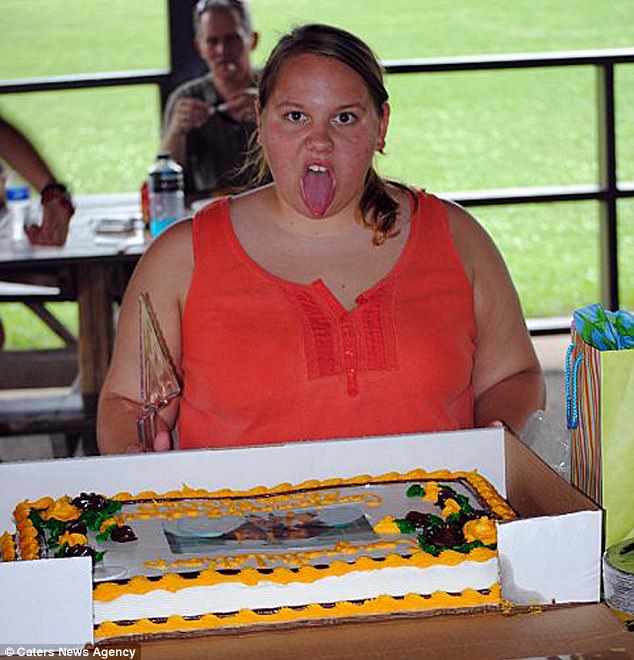 Rachael (pictured before her weight loss) weighed 285lbs (20st 5lbs) at her heaviest, when she would gorge on fast food and fizzy drinks

‘But for me, I was embarrassed by it, it left me feeling depressed and reminded me of how large I used to be rather than what I had achieved.’

She added: ‘It caused me a lot of self-image issues, I had accomplished a lot by losing so much weight but had this horrific reminder of how I used to look.

‘I wanted to look fit, I enjoy being athletic, lifting weights in the gym but in the fitness industry, I also knew I needed to a certain look to be taken seriously.’

Rachael decided to have an expensive skin removal procedure, setting up a crowdfunding page in order to raise part of the $18,000 (£13,000) required to pay for it.

After raising nearly $2,000 (£1,400) towards the treatment, she was finally able to go under the knife three months ago. 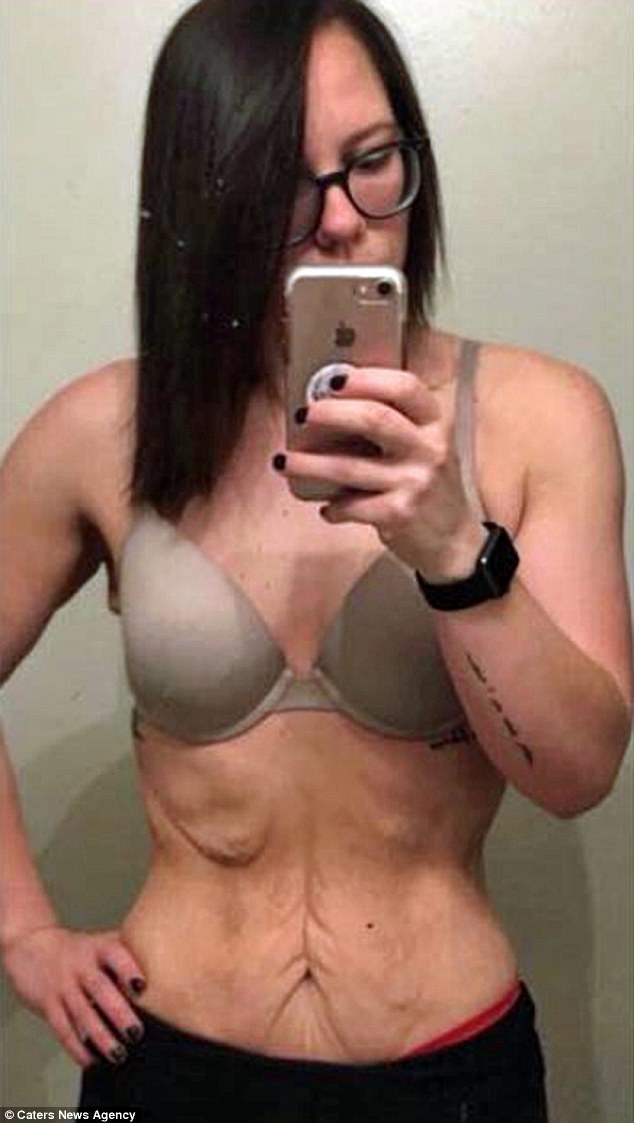 Rachael managed to lose nearly 165bs (12st) after overhauling her diet and exercise regime, but was left unhappy with her excess skin (pictured) 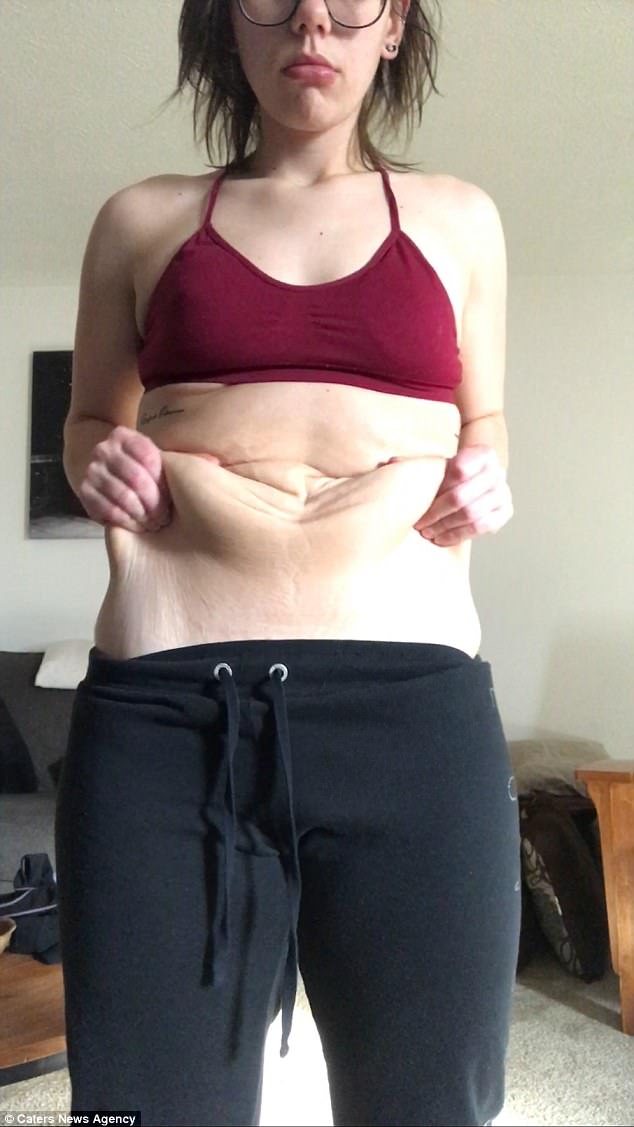 She said she struggled with body image issues, as her saggy skin was a ‘horrific reminder’ of how she used to look

Rachael says having her excess skin removed has finally allowed her to start a new chapter in her life.

‘The surgery has changed the way I see my body, it’s reminded me that with enough determination physically and mentally you can do anything you want to,’ she explained.

‘I feel like I’m closer to my vision of how I wanted to look when I started losing weight, before my excess skin stopped me from achieving that dream.

‘I can’t wait to wear a bikini, I haven’t Sworn one since I was four-years-old, because I was always bigger and never comfortable enough in my own skin to wear one.

‘Thanks to having the surgery, I feel able to close the door on all the negativity of the past 20 years of my life, where I didn’t like myself, it was very helpful for me mentally.’ 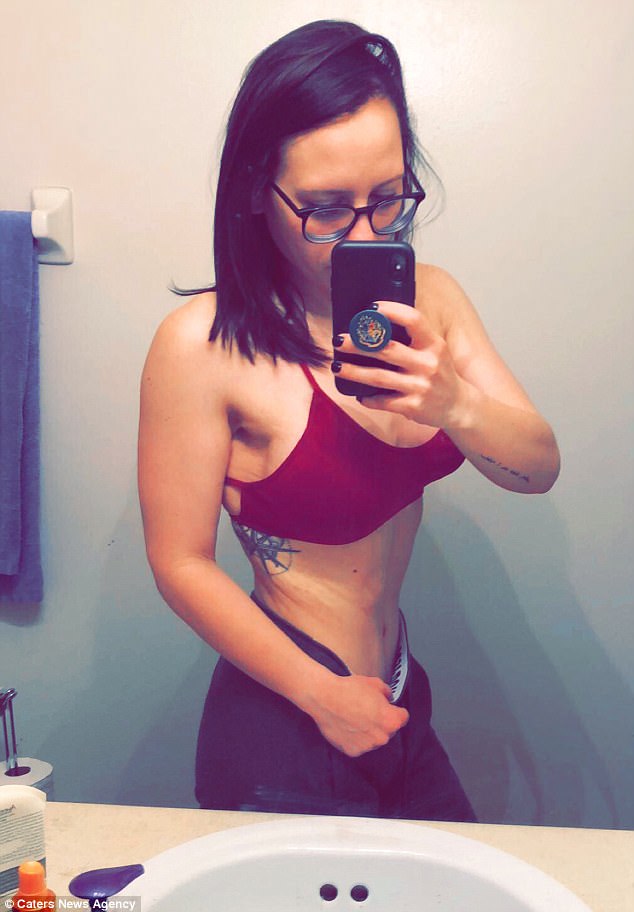 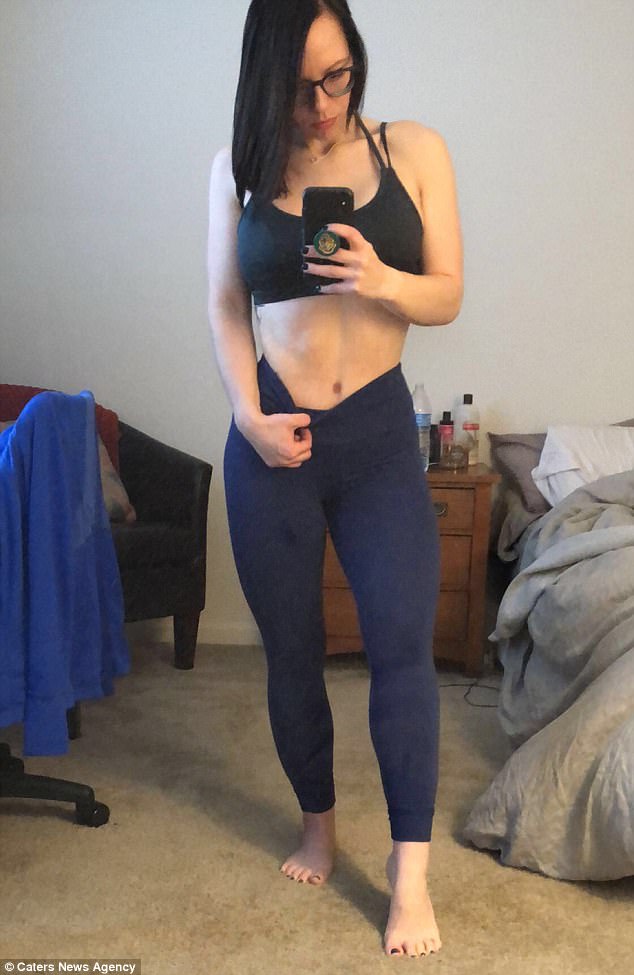 She explained how she can’t wait to get into a bikini, having not worn one since the age of four

She added: ‘While others saw my excess skin as something that represented my weight loss, for me it was different from the idea of how I wanted to look.

‘Mentally I feel great now and am very happy with how my body has recovered, the results are amazing.

‘The biggest things I’ve learned with the surgeries is that you have to love yourself, even if you have fat or are lacking in muscle.

‘There’s such a huge difference in how I look now, I feel so comfortable.’

Rachael’s weight gain spiralled out of control after her mother died from cancer in 2004, the heartbreak led her to comfort eat excessively and ignore nutritional advice. 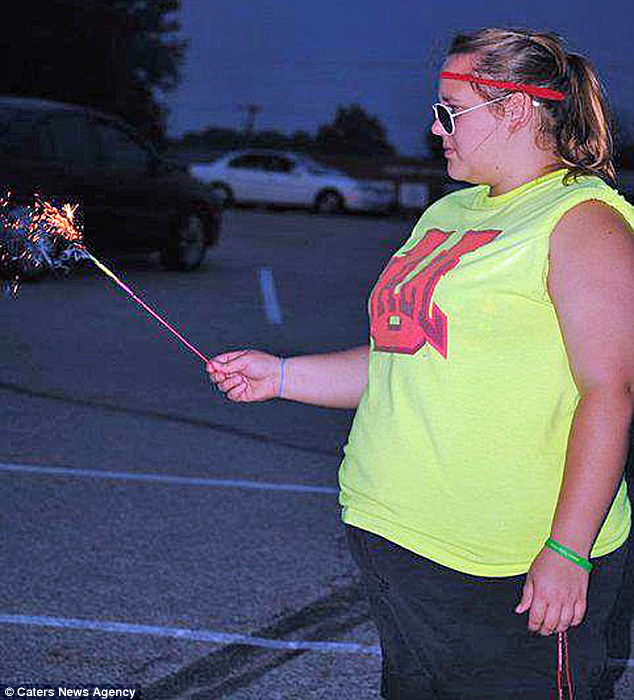 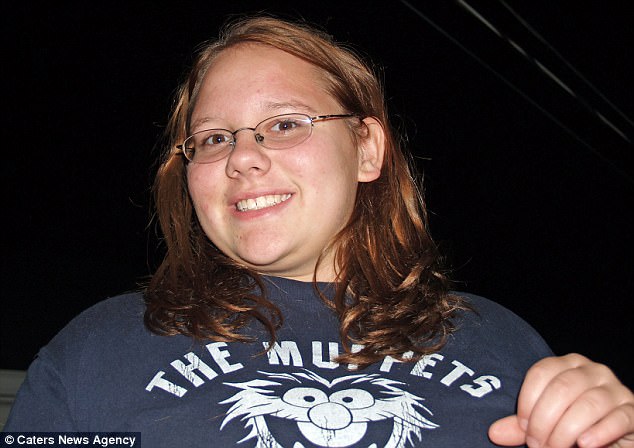 She said her mother’s death led her to comfort eat excessively and ignore nutritional advice. Rachael is pictured here at the end of her teenage years, before her weight loss

By the end of her teenage years, she had a body mass index over 50 – the highest tier in the obesity scale.

Rachael said: ‘I was a little chubby when I was a kid, but after my mom became really sick and passed away I gained a lot of weight.

‘I liked sugary snacks, sodas and potato chips, I was just eating large portions of food that was bad for me.

But after being rejected by her childhood sweetheart she decided to drastically change her consumption habits, setting a New Year’s resolution to lose weight. 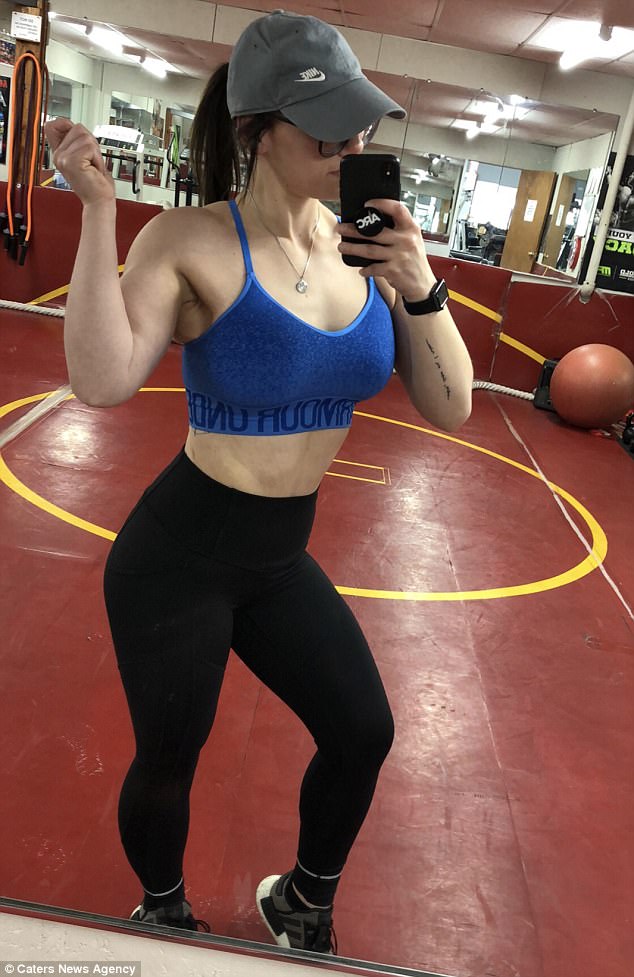 Rachael (pictured after surgery) was finally able to have surgery to remove her excess skin three months ago, after raising nearly $2,000 (£1,400) towards the treatment 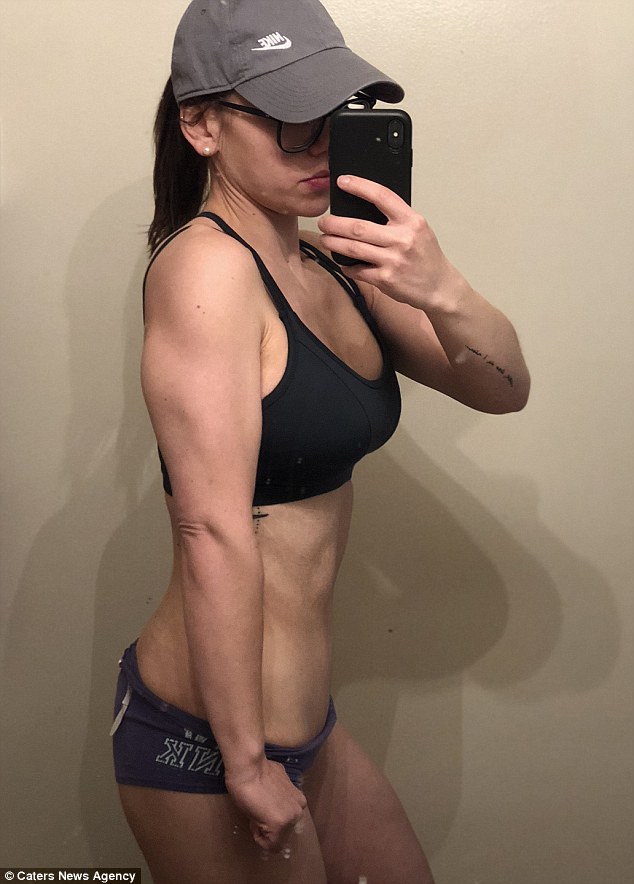 She said that mentally she now ‘feels great’, and is ‘very happy with how her body has recovered’. Rachael is pictured here after having surgery

Rachael altered her diet, reducing her portion sizes by half and cutting out sugar, as well as exercising with her roommate.

Over time she lost nearly 165lb (12st) and due to her radical transformation, she says many of her friends struggle to recognise her.

Rachael said: ‘People who I used to go to school with don’t even recognise me now, whenever I see someone they’re always so surprised by how I look and are impressed.

‘I keep joking that I’ll definitely be going to our 10-year school reunion because everyone will be astonished when they see me.’ 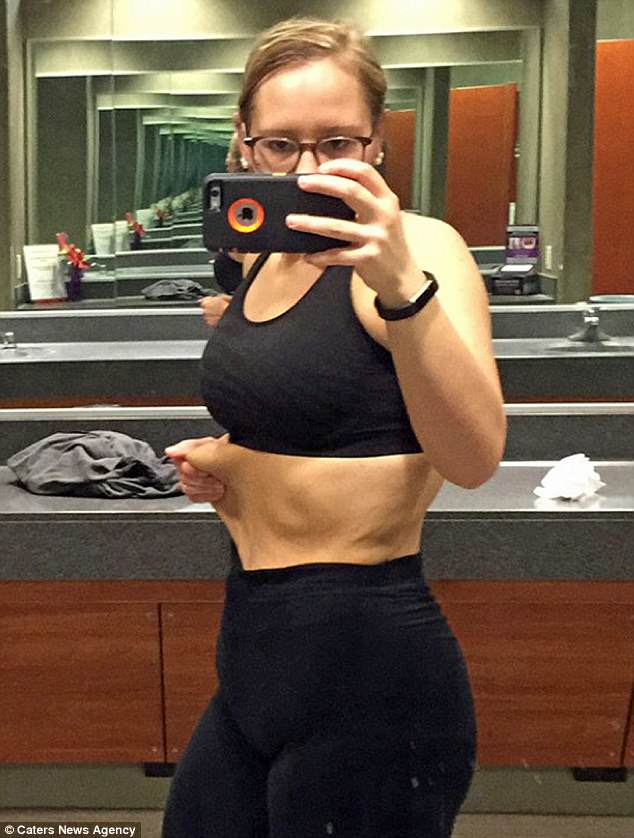 Rachael now works for ARC Fitness, where she focuses on teaching people self-love and a healthy mindset alongside helping with fitness transformations.

They had a 30-day challenge to teach people the importance of nutrition and exercise, while practicing positive affirmations – as well as coaching online.

Rachael said: ‘Believing in yourself is the first step to losing the weight, to becoming happier with yourself.

‘By changing that mindset from negative to positive, you will see the results you want in no time.’