Indianapolis man dies after jumping into pond to save drowning daughter

A brave father died after diving into a retention pond to save his drowning daughter.

Anthony Burgess Jr., 24, had been talking to a friend beside his car at the Core Riverbend Apartments in Castleton in the city of Indianapolis, Indiana.

His three-year-old daughter tried to get out of the car too, but while clambering over the front seats she hit the gear lever, putting the car into reverse.

It then rolled into the pond with her inside during the tragic accident at about 4.30pm on Sunday, WIBC reported.

A brave father died after diving into a retention pond to save his drowning daughter at the Core Riverbend Apartments in Castleton in the city of Indianapolis, Indiana (pictured: divers at the scene)

Neither Burgess nor his friend Bobby Malone, 28, knew how to swim, but they dived in to try to save the child.

The father reached the car before it disappeared underwater and yelled to his daughter to get into the back seat, before grabbing her from the vehicle.

Malone made his way back to shore to avoid drowning while another man on the other side of the pond, who also could not swim, jumped in to rescue the girl.

A 30-year-old bystander then went back to help the girl’s father, who had disappeared under the water, but had to turn back to shore halfway towards him.

Burgess was pulled from the pond by first responders and rushed to St. Vincent Indianapolis Hospital, but died from his injuries at about 11.30pm.

He had reportedly been in the water for nearly 20 minutes. 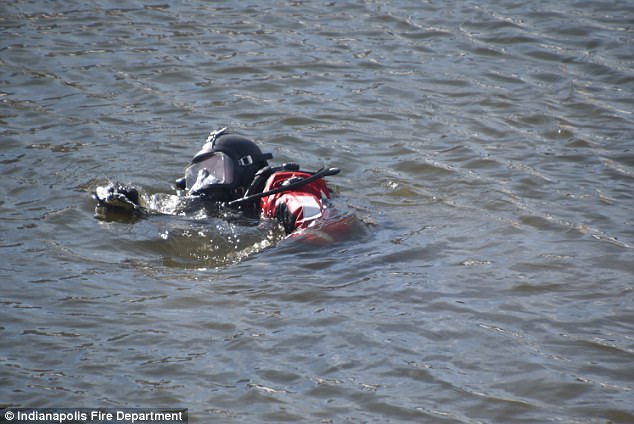 Anthony Burgess Jr., 24, had been talking to a friend beside his car. His three-year-old daughter tried to get out of the car too and hit the gear lever, making the car roll into the water (above: a diver at the scene) 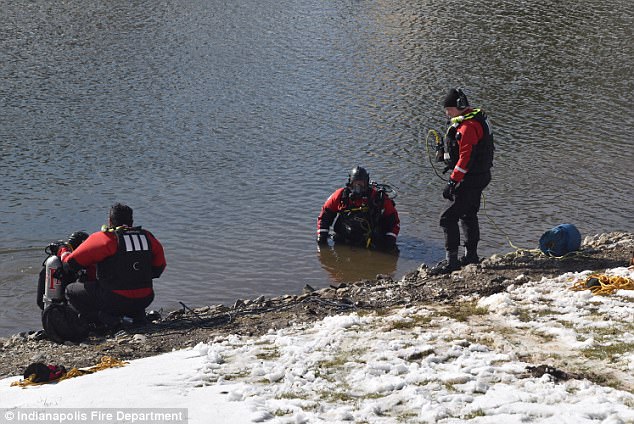 The young girl is in a critical but stable condition (pictured: divers at the scene)

His daughter was taken to Riley Hospital for Children at Indiana University Health and remains in a critical but stable condition.

The bystander who helped to rescue the girl was in good condition but taken to hospital for checks. The condition of Burgess’s friend has not been reported.

Divers found Burgess’s car about 25 feet down and 50 feet out from the shore.

Retention ponds are designed to store water and provide attenuation and treatment to emergent and submerged aquatic vegetation along their shoreline.