Indian star under-fire for suspect play yet again in his side’s thrilling win over Pakistan: ‘Ashwin and cheating – name a better love story’

India might have escaped with a final ball thriller victory against Pakistan on Monday, but a fielding controversy has marred what has been labelled the greatest T20 cricket international of all time.

With India and Pakistan unable to play each other in any form of cricket in their respective countries, this 2022 ICC Men’s T20 World Cup clash promised plenty of hype – and delivered.

India’s Ravichandran Ashwin claiming a catch which he knew he hadn’t taken is a serious offence in cricket. Many Non-Indian cricketers were banned by ICC for claiming a bump ball under ‘conduct contrary to the spirit of the game’. Will @ICC ban Ashwin for cheating? 💰 #NotCricket

Ravichandran Ashwin hit the winning runs after some Virat Kohli heroics on 82* rescued the Indian side from the dead and consigned Pakistan to a defeat that could spell doom to their World Cup campaign.

While Indian supporters were toasting the final over nerves of steel showed by Ashwin, the veteran caused plenty of controversy early in the match for claiming a catch that hit the MCG turf.

Mohammed Shami had bowled a bouncer to Pakistan’s Shan Masood, who attempted a hook in the direction of Ashwin, who was fielding at fine leg. 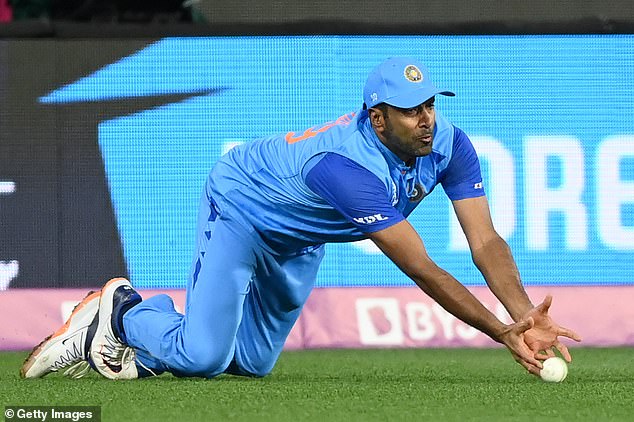 Ashwin claimed to take the catch cleanly as India began to celebrate given that Pakistan had already lost their two top batters namely Mohammed Rizwan and skipper Babar Azam.

It was decided, however, to refer the matter to the third umpire for review and the replay showed the ball had hit the MCG grass before Ashwin got his fingers underneath.

Kohli, You are a great player, beyond doubt, however, please dont call today’s match a victory:
1. Ashwin clearly tried to cheat.
2. No ball in last over was clearly wrong and changed the result.
3. Taking three runs after being bowled makes a class player very ordinary https://t.co/Oj0wgbo662

Masood survived the appeal but Ashwin became a heated topic on social media with many branding the controversial veteran a cheat.

‘Surely that cheat Ashwin has had enough chances and needs to be suspended?’ one fan asked.

‘Ashwin tries to cheat his way to a catch DRS got in the way,’ another said.

‘Annoying India won that & a shame that the cheat Ashwin won it for them. Gutted for Pakistan and feel for Nawaz,’ added another.

‘This doesn’t feel right! Ashwin tries to cheat, Nawaz gets an unfair no ball, and then Ashwin comes out only to bat the winning run,’ yet another posted.

However, despite Ashwin’s chequered history, many fans believed he was not in the wrong on this occasion. 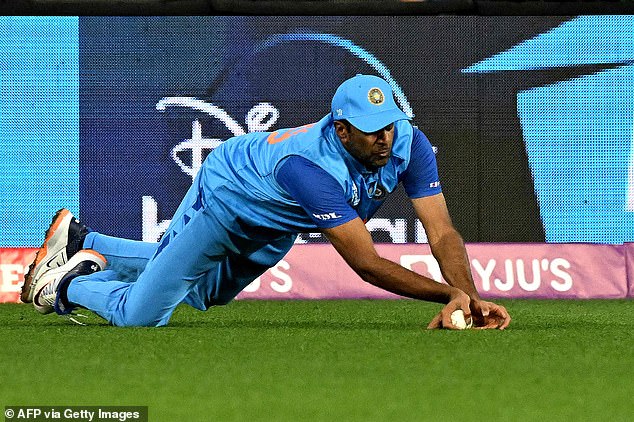 In real time, it was hard to see whether the catch was legitimate or not as Ashwin was diving

Fans were quick to make up their mind, though, and Ashwin’s past did not help his cause

Unlike his teammates, Ashwin did not celebrate wildly and indicated that he was not sure whether he had got his fingers under the ball or not.

‘Unfortunately he has history and I very much don’t like the way he plays his cricket, but it’s very unfair to brand him as a cheat for claiming this,’ one fan posted.

‘I am not usually a fan of the Indians, (although that has changed a bit in the last few years) , but to call him a cheat is a bit harsh,’ added another.

‘I thought it was out when he first took it. It wasn’t until the footage was slowed down and zoomed in that we saw the bump ball. At full speed it probably felt like a catch.

‘Calling him a cheat is a step too far in my opinion. At least we have the technology to decide one way or the other (not that the umpires always get it right as well).’

2019: Ashwin launches a one-man crusade to make the controversial Mankad acceptable. He runs out non-striker Jos Buttler in the IPL in 2019 and warns Aussie Aaron Finch that he will do the same to him in 2020.

2021: Ran a single in the IPL after a fielder’s throw ricocheted off his batting partner. While within the laws of the game, it is against the spirit of cricket. England skipper Eoin Morgan calls him a ‘disgrace’

2021: Ashwin adopts a diagonal run up in the first Test between India and New Zealand, obscuring the umpire’s view and the non-striker. Umpire Nitin Menon disapproved of this follow through and warned Ashwin that is came under Fair Play laws of cricket, resulting in a heated exchange between the pair.