Indigenous Australian site was in use 22,000 years earlier than previously thought

The dated shell middens – remnants of ‘meals eaten long ago’ – capture a record of Aboriginal occupation that goes back 29,000 years in the Katarapko Riverland Floodplains, South Australia.

They had to deal with unpredictable river flows and heavily-salted valley waters that may have limited their seafood options.

The region is one of the oldest Indigenous sites along Australia’s largest river – the 1,558-mile-long Murray, which runs through the states of New South Wales, Victoria and South Australia.

The river has a rich history as an Aboriginal settlement spanning thousands of years, providing sources of food and water.

The new study stretches the history of Aboriginal Australian occupation in this specific region back an extra 22,000 years – to around 27,000 BC.

This coincides with the Last Glacial Maximum – a period when continental ice sheets reached their maximum total mass during the last ice age, and land near the ice sheets that escaped glaciation was cold and covered with tundra vegetation.

Modern humans are though to have arrived in Australia some 50,000 years ago, although previous research claims Kakadu National Park in Australia’s Northern Territory was home to some tribes at least 65,000 years ago.

‘These results include the first pre-Last Glacial Maximum ages returned on the River Murray in South Australia and extend the known Aboriginal occupation of the Riverland by approximately 22,000 years,’ said study author Craig Westell at Flinders University in Adelaide.

The shell midden were taken from a site that overlooks the Pike River floodplain, downstream of the town of Renmark, nearly 160 miles northeast of the South Australian capital of Adelaide. 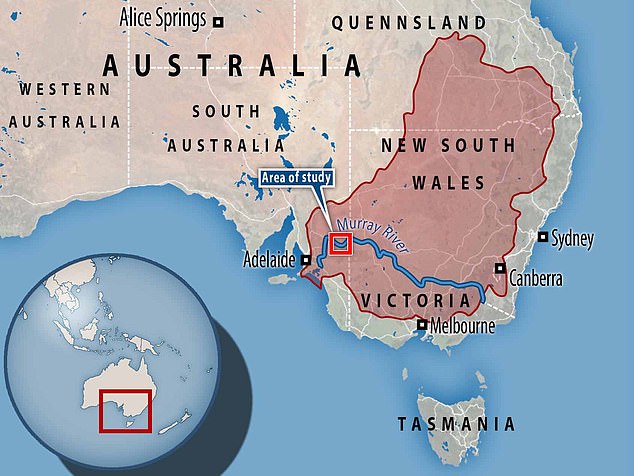 A total of 15 samples, collected in April 2018 and May 2019, were analysed at the Australian Nuclear Science and Technology Organisation (ANSTO) Centre for Accelerator Science, a government facility at Lucas Heights in New South Wales.

A further 16 samples were analysed at the University of Waikato Radiocarbon Dating Laboratory using both accelerator mass spectrometry (AMS) and conventional radiometric methods.

AMS is a form of mass spectrometry that accelerates ions to extraordinarily high kinetic energies before analysis and reveals the presence of isotopes. 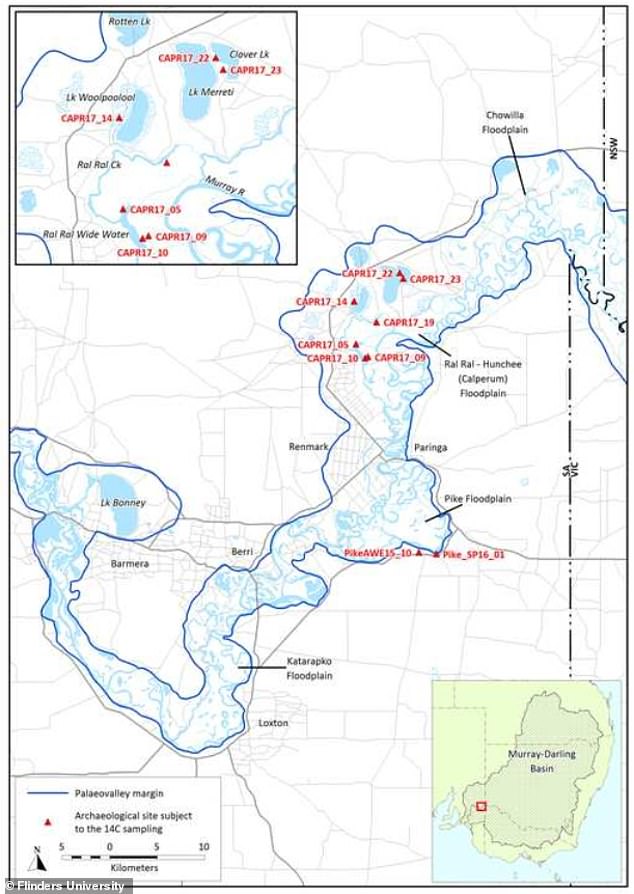 In order to measure the age of carbon samples it is necessary to find the amount of radiocarbon in a sample.

This measurement can be made either by measuring the radioactivity of the sample or by directly counting the radiocarbon atoms using a method called Accelerator Mass Spectrometry (AMS).

AMS is performed by converting the atoms in the sample into a beam of fast moving ions (charged atoms).

The mass of these ions is then measured by the application of magnetic and electric fields.

Specifically, the scientists were looking for traces of carbon-14, a carbon isotope that is commonly used by archaeologists and historians to date ancient bones and artefacts.

The rate of decay of carbon-14 is constant and easily measured, making it ideal for providing age estimates for anything over 300 years old.

More than 30 additional radiocarbon dates were collected in the region, spanning 15,000 years ago to the recent present.

The period represented by the radiocarbon results brackets the Last Glacial Maximum, commonly known as the last Ice Age.

This period marks a time when climatic conditions were colder and drier and when the arid zone extended over much of the Murray-Darling Basin.

The river and lake systems of the Murray-Darling Basin – the 400,000-square-mile geographical area that spans southeastern Australia – were under stress during this time, the team said.

The Last Glacial Maximum is also the most significant climatic event to face modern humans since their arrival in Australia some 40,000-50,000 years ago. 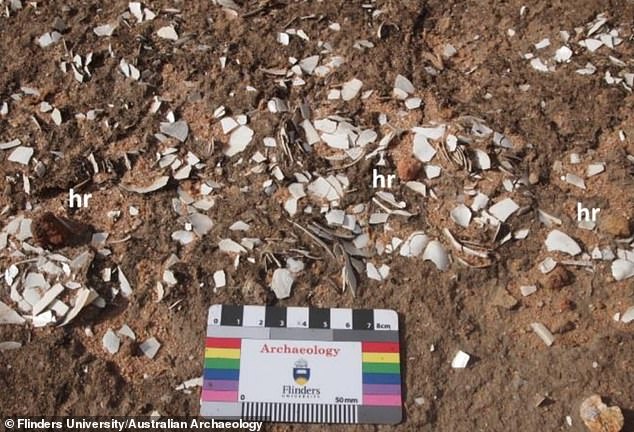 In the Riverland, dunes were advancing into the Murray floodplains, river flows were unpredictable, and salt was accumulating in the valley.

Salinisation of the floodplain waters are evident during the Last Glacial Maximum and it is likely that Aboriginal people would have had fewer and perhaps less reliable subsistence options.

Throughout this extended period, the river was also characterised by a regime of high energy though short-duration flood events. 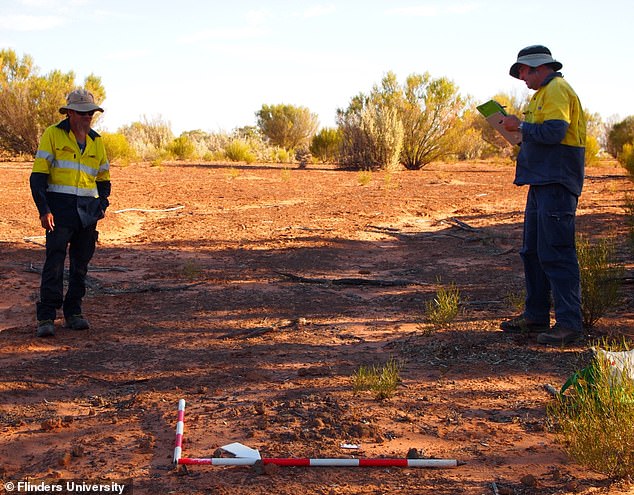 The ecological impacts witnessed during one of the worst droughts on record, the so-called Millennium Drought, which extended from late 1996 to mid-2010.

‘The dramatic collapse in floodplain ecology during this event provides a poignant reminder of the potential pace and scale of change, and the challenges posed to economic and social systems embedded within this seemingly bountiful, though ultimately fragile environment,’ the team write in their research paper, published in Australian Archaeology.

This recent drought period, provides an idea of the challenges Aboriginal people may have faced along the river during the Last Glacial Maximum, and other periods of climate stress, researchers conclude.

The results show that Aboriginal people had to respond and adapt to an ever-changing river landscape and managed to survive during times of hardship.

‘Life adapted to a river unrecognisable in the modern system, an image far removed from the verdant shoestring oasis we imagine this river to be,’ they say.

The dating forms part of a much larger and ongoing research program led by Associate Professor and study co-author Amy Roberts at Flinders University.

The program is a broad-ranging investigation of past and contemporary Aboriginal connections to the Riverland region and the central River Murray corridor.

WHAT IS CARBON DATING AND HOW IS IT USED?

Carbon dating, also referred to as radiocarbon dating or carbon-14 dating, is a method that is used to determine the age of an object.

It can only be used on objects containing organic material – that was once ‘alive’ and therefore contained carbon.

The element carbon apears in nature in a few slightly different varieties, depending on the amount of neutrons in its nucleus.

Called isotopes, these different types of carbon all behave differently.

Most of the stable, naturally occurring carbon on Earth is carbon 12 – it accounts for 99 per cent of the element on our planet.

Another carbon isotope is Carbon-14, a radioactive version of carbon.

It occurs naturally in the atmosphere as part of carbon dioxide, and animals absorb it when they breathe.

Animals stop taking it in when they die, and a finite amount of the chemical is stored in the body.

Radioactive substances all have a half-life, the length of time it takes for a material to lose half of its radioactivity.

This long half-life can be used to find out how old objects are by measuring how much radioactivity is left in a specimen.

Due to the long half-life, archaeologists have been able to date items up to 50,000 years old.

Radiocarbon dating was first invented in the 1940s by an American physical chemist called Willard Libby. He won the 1960 Nobel Prize in Chemistry for his discovery.