Indigenous NRL star Blake Ferguson has become the latest victim of racial abuse after a troll sent him a personal message calling him a ‘petrol sniffer.’

The racist attack came just three days after another indigenous NRL star Latrell Mitchell hit back at trolls who called him a ‘filthy black maggot’ online.

Ferguson, 29,  received the vile message on Instagram on June 29, just after Parramatta Eels’ round 15 match against Canberra Raiders, but he decided not to disclose it at the time as he prepared for the State of Origin decider on July 10.

The Sydney Morning Herald reported that the message was very offensive and made several references to petrol sniffing – an intoxication that had previously devastated some Aboriginal communities.

‘I know the real reason you flew straight from Perth to Darwin,’ it read.

The Parramatta star, however, reported the racial abuse to his team, which notified the NRL.

‘As soon as Blake notified us of the message, the club made it clear that it would pursue the matter as thoroughly as it could and has been working with the NRL integrity unit over the past few weeks,’ Parramatta said in a statement.

‘We condemn this type of behaviour in the strongest possible manner and we will protect our players from this continuing in any shape or form.’

Ferguson has recently recovered from a knee injury and is expected to play for Eels before next month’s finals series. 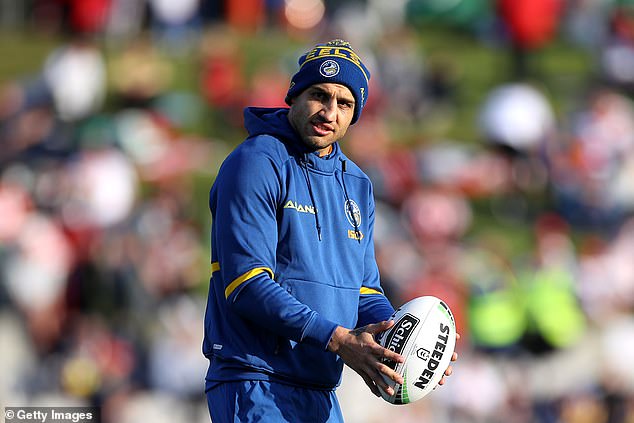 Ferguson, 29, received the vile message on Instagram on June 29, just after Parramatta Eels’ round 15 match against Canberra Raiders , but he decided not to disclose as he prepared for the State of Origin decider on July 10

On Tuesday, fellow NRL star Mitchell was praised for calling out racial abuse.

Mitchell posted a screenshot of the racial slur made on Facebook, where a man said he would laugh if the Sydney Roosters centre’s neck was broken.

But Mitchell called the troll out, saying racism had no place in Australia.

‘It’s just a game of footy. There is not need for comments like this (sic). S**t like this is disappointing. 2019 and nothing is changing,’ Mitchell wrote on his Instagram.

Mitchell’s father Matt said he broke down in tears after seeing the racial abuse his son received. 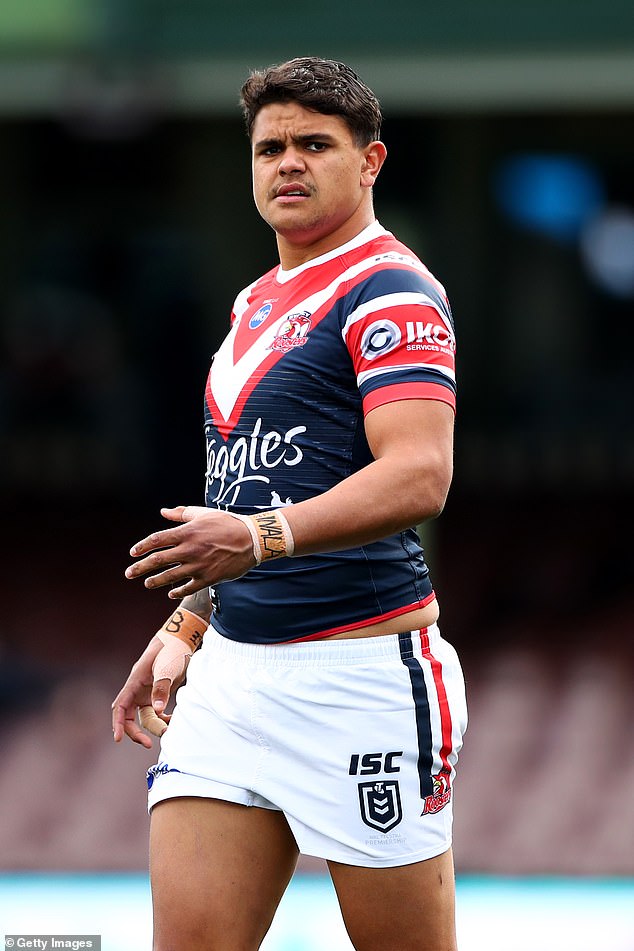 ‘I commend Latrell for doing just that. These comments are disgusting and have no place in our game.

‘What I love about rugby league is the diverse cultures and backgrounds it brings together. The heritage of our players is what makes our game so special. 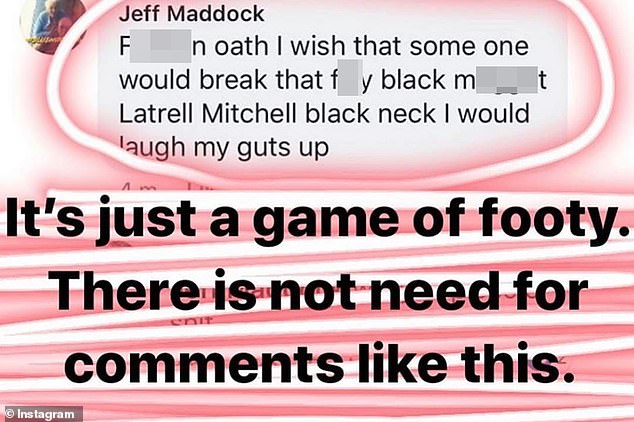 Mitchell posted a screenshot on Sunday night of the racial slur made on Facebook, where the offender claimed he would laugh if the NRL star’s neck was broken 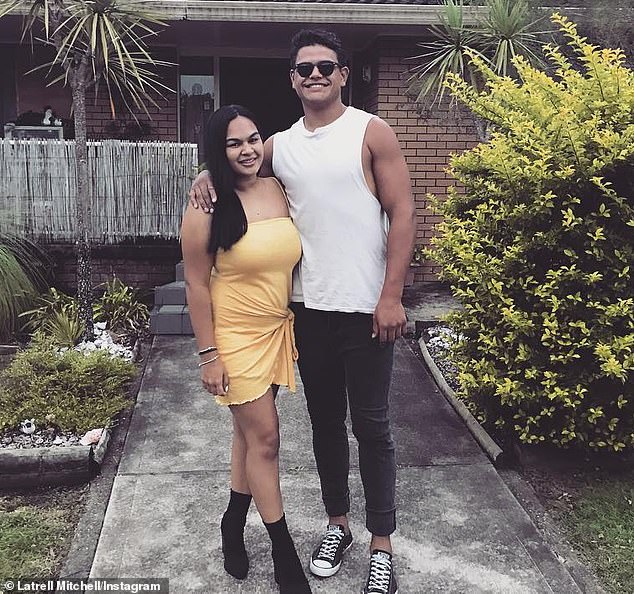 Latrell Mitchell called the troll out, saying racism in this day and age is despicable. Pictured with girlfriend Brielle

‘Incidents like this show why our school programs like In League In Harmony and Indigenous rounds are so important to educate the next generation about inclusion.

‘There is no place for any sort of abuse on social media towards our players or their families.’

The NRL will investigate if the person behind the comments is a club member, and if he can be barred from attending games.

The Roosters are also well aware of the matter, and are leaving the issue in the hands of the NRL. 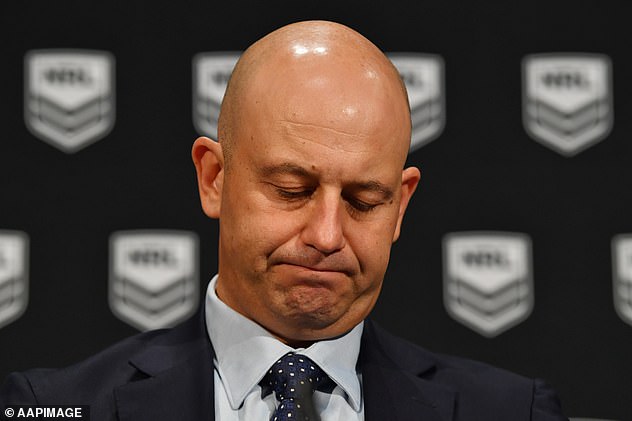 NRL chief executive Todd Greenberg took fire at the offender’s comment, as the NRL investigates if the person behind the comment is a club member

‘We encourage our players to have a voice in terms of telling their stories or about themselves and helping promote the interests of the game generally,’ Prendergast told AAP.

‘But I think they’ve also got a strong voice in calling out behaviour they think is unacceptable. It can help better protect their fellow players as we’ve seen in recent times.

‘Hopefully we see a trend in towards this type of behaviour that is completely unacceptable being called out as well.’

‘He’s been getting absolutely hammered, relentlessly – like hundreds every morning and they are just the most disgusting things,’ McGuire’s wife Tanyssa told the Townsville Bulletin.

‘He had someone a couple of days ago saying they hope he gets hit by a bus so his kids don’t have to grow up with Josh McGuire as their dad’. 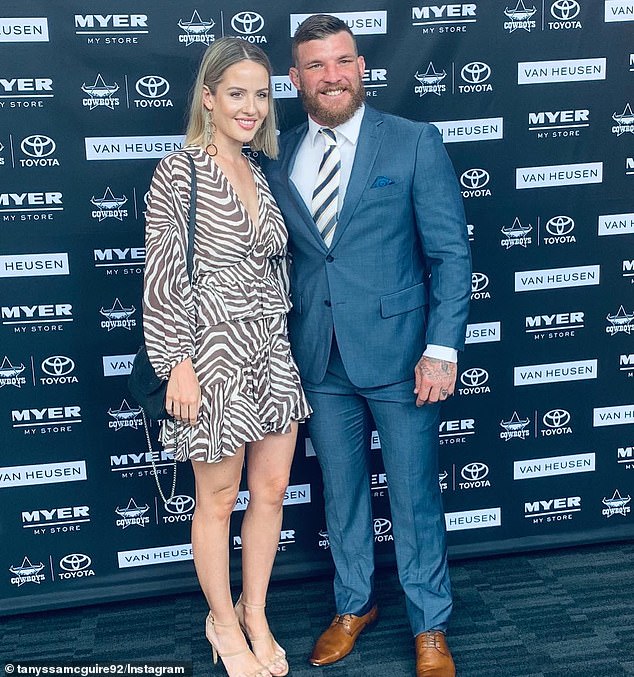 Cowboys star Josh McGuire copped death threats for his latest suspension, with his wife Tanyssa (left) saying the trolls’ comments have been ‘relentless’