Valentine’s Day has been banned in an Indonesian city to ‘maintain the purity of Islamic values.’

Young couples in Banda Aceh have been told they will be ‘defying Islamic law’ if they celebrate the romantic occasion tomorrow and hotels, restaurants and entertainment venues have been warned against hosting any events.

City mayor Aminullah Usman said: ‘To maintain the purity of Islamic values and strengthen Islamic laws, we would like to inform the public that Valentine’s Day goes against Islamic law and is not a part of Aceh’s culture.’

The mayor said he had signed and issued a circular on Monday urging youngsters in the city to refrain from taking part in any kind of activities in celebration of Valentine’s Day.

The city, which has a population of around 270,000, is the capital of Aceh province on Indonesia’s Sumatra island.

Aceh is the only region in Muslim-majority Indonesia that imposes Sharia law, which stipulates flogging as a punishment for crimes related to Islamic morality, such as adultery, gambling as well as gay and premarital sex.

Bandung Education Agency secretary Cucu Saputra said the prohibition had been in place for a few years to prevent students from engaging in improper activities on February 14.

He also expressed his belief that celebrating Valentine’s Day was against the norms and culture of Indonesia.

‘Valentine’s Day is not a part of our culture and goes against the religious norms,’ Cucu said on Wednesday. 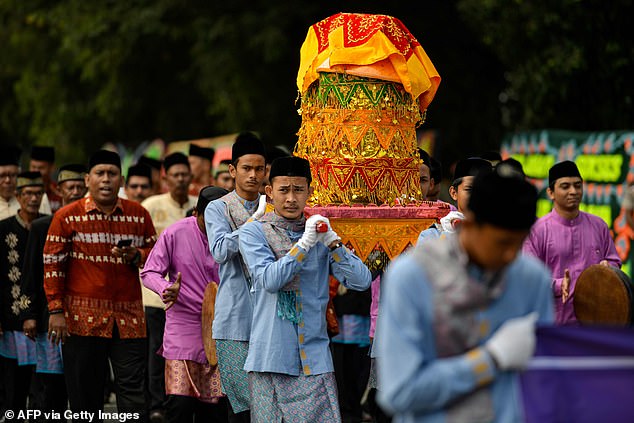 Residents of banda Aceh carry a tray containing a traditional food box last week during a Muslim celebration of Prophet Muhammad’s birthday. The city’s mayor has banned residents from celebrating Valentine’s Day tomorrow saying it would be ‘defying Islamic law’