One woman was seen collapsing in pain after suffering 20 strokes from a rattan cane outside a mosque in the regional capital of Banda Aceh, and had to be helped on to a stretcher by guards.

Despite international condemnation, whipping is a common punishment for a range of offences in the deeply conservative region on Sumatra island, including gambling, drinking alcohol, and having gay or pre-marital sex.

All of the couples had served several months in prison before the sentences were carried out.

A woman is helped on to a stretcher in Bana Aceh, the capital Aceh, Indoensia’s only Sharia law province, after being publicly flogged for ‘displays of public affection’ 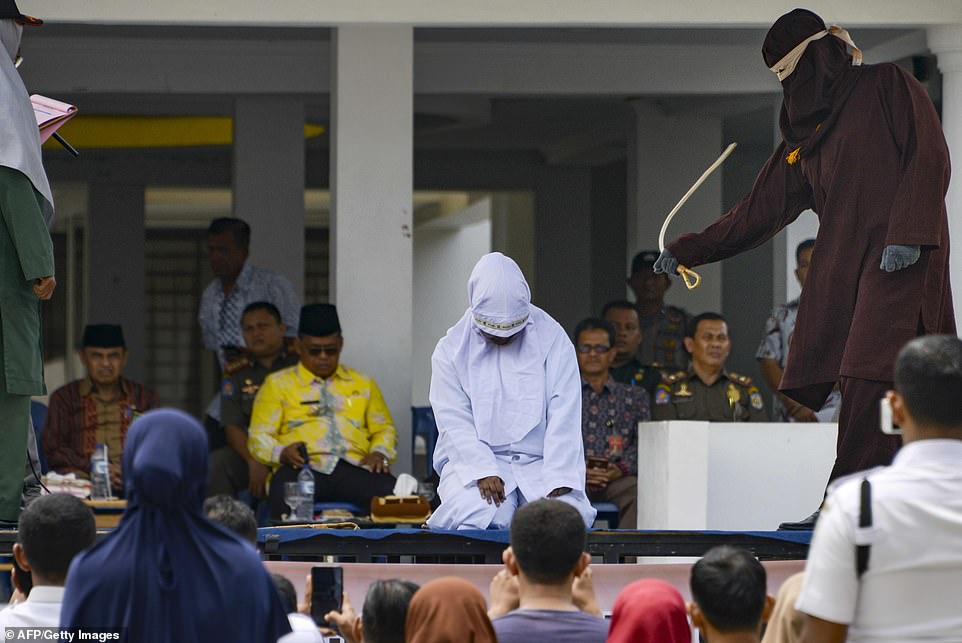 Women are traditionally allowed to remain seated while they are beaten while men are forced to stand. They are also accompanied by female guards who help them on to and off the stage 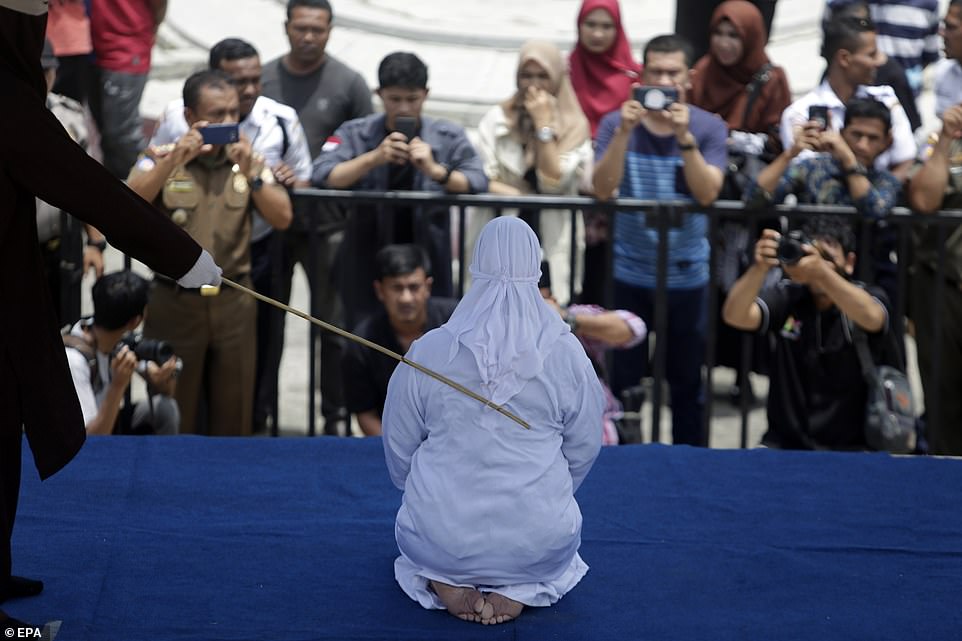 Public floggings are common in Aech for a range of crimes including extramarital sex, same-sex relationships, adultery and even hugging in public 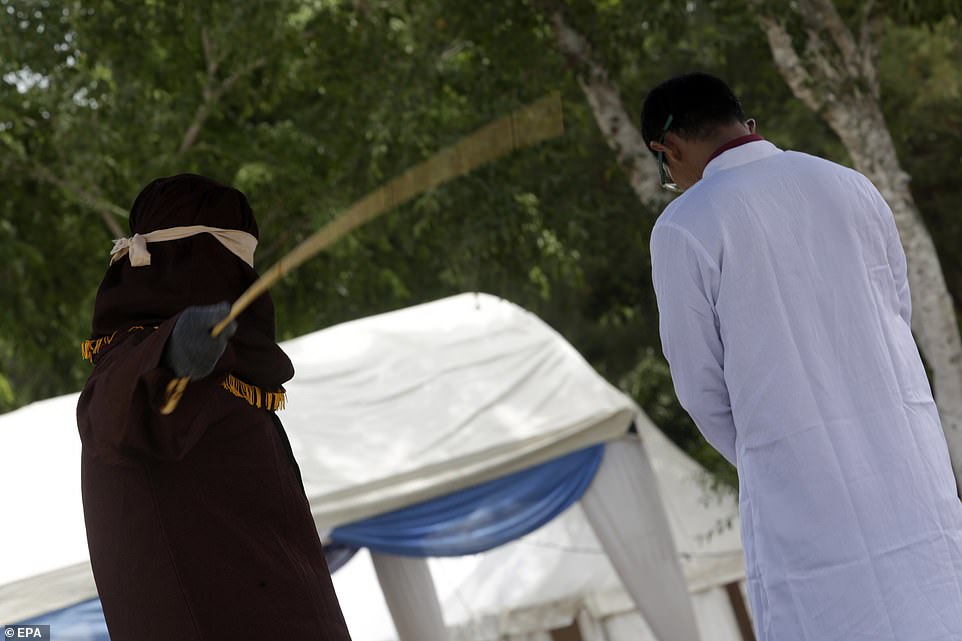 Dozens of onlookers, including some visiting Malaysian students, watched the spectacle.

‘I’m nervous because this is the first time I’ve seen something like this,’ said visitor Muhammad Rushdy.

‘But it can serve as an important lesson for us from other countries to comply with local regulations,’ he added.

Banda Aceh’s mayor Aminullah Usman repeated his long-held claim that the punishment is a deterrent.

‘But we keep telling visitors not to be afraid to visit Banda Aceh… because you won’t be flogged if you don’t break the law,’ he said.

Aceh is the only province in Indonesia, the world’s most populous Muslim nation, to apply Sharia law which proscribes corporal punishments for ‘crimes’ such as extramarital sex, same-sex relations, and smoking.

However, Indonesian lawmakers are considering rolling out a similar legal code across the entire country as they look to replace their Dutch colonial-era legal code with one based on Indonesian principles. 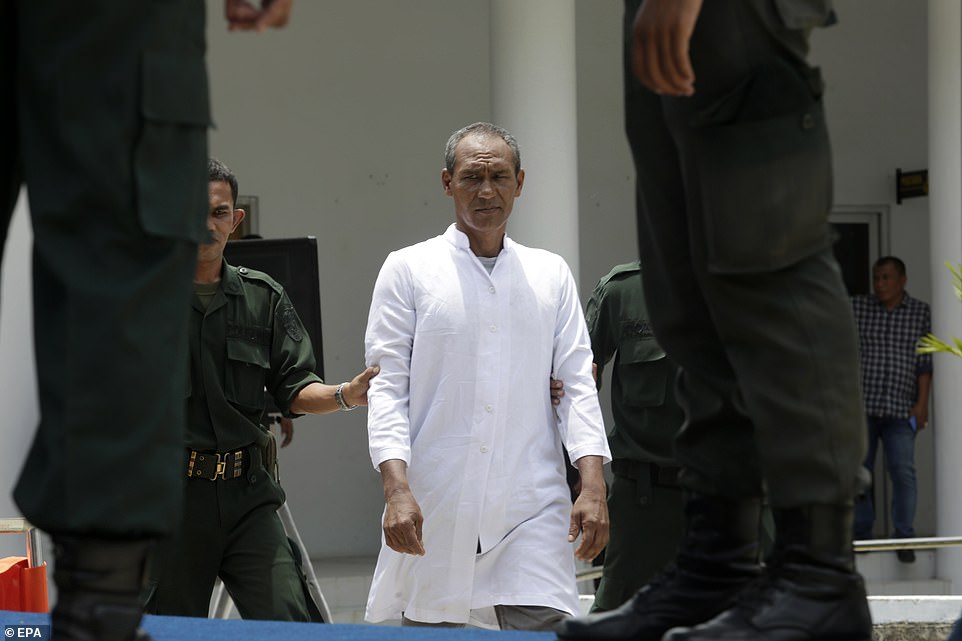 Sharia Police escort an Acehnese man prior to his caning. He spent months in prison before the sentence was carried out 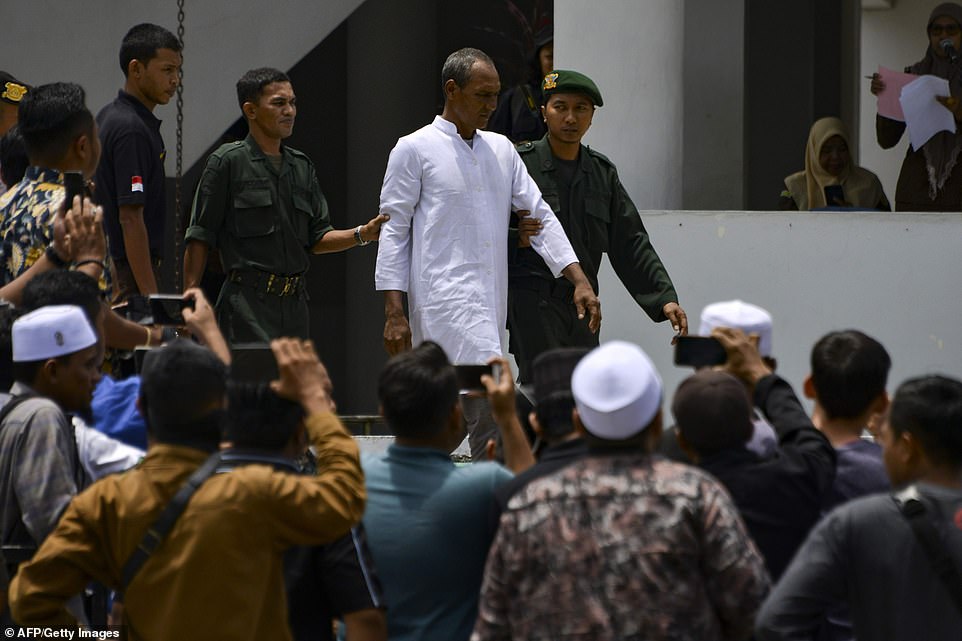 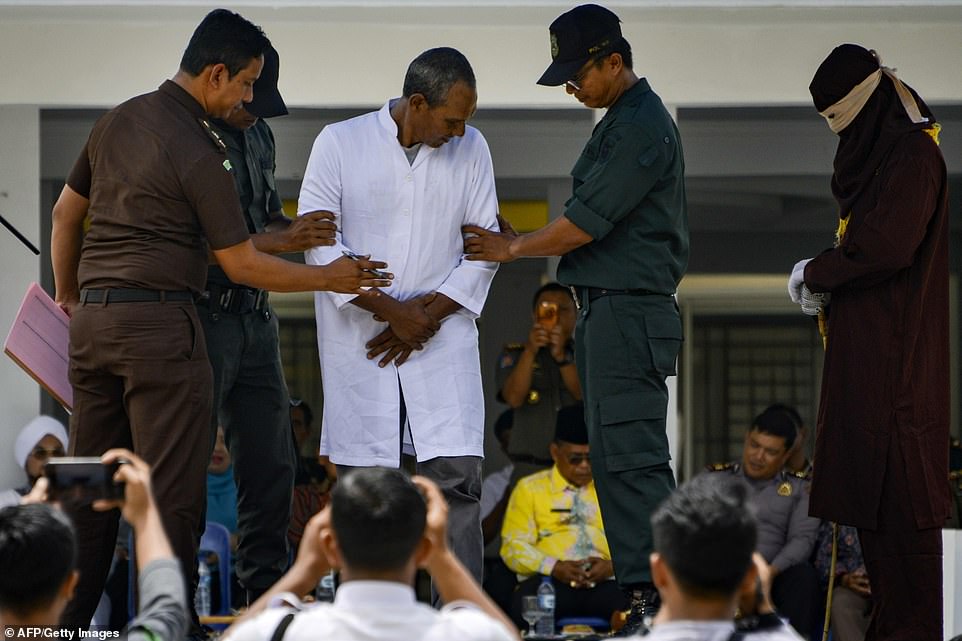 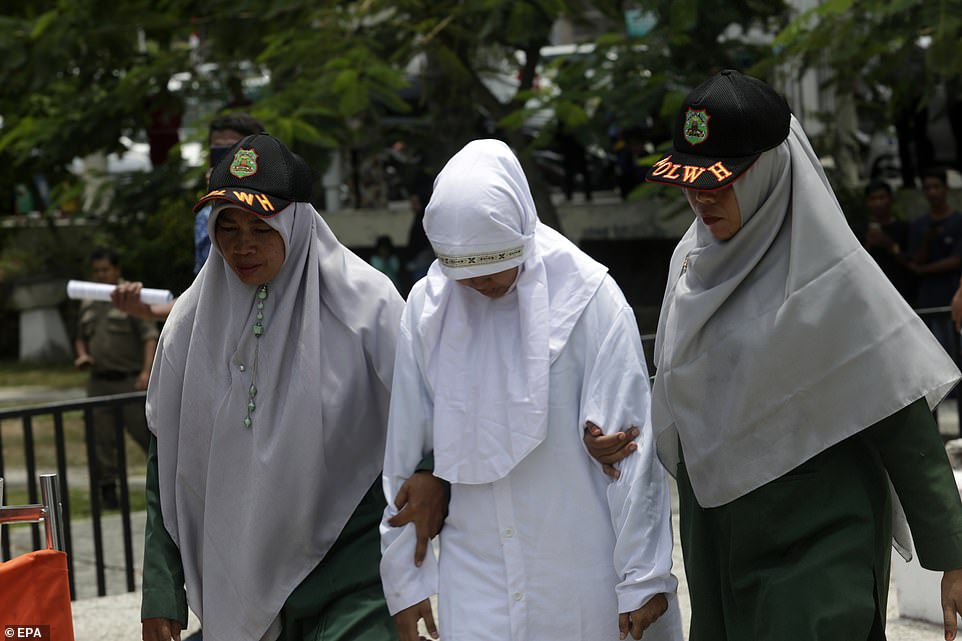 The proposed code would see extramarital sex punished with up to one year in jail, unmarried couples who ‘live together as a husband and wife’ could be jailed for six months or face a $710 fine, while anyone who promotes contraception to a person aged under 18 could also face a fine.

Indonesia’s parliament and government agreed a final draft, of the 628-article bill on Wednesday and the House of Representatives is expected to vote on it later in the month.

The changes to the law would also apply to foreigners visiting the nation which is home to around 260 million people, including substantial Christian, Hindu and Buddhist minority groups.

The Institute for Criminal Justice Reform, an NGO, said millions of Indonesians could be ensnared by the new laws. It noted a study indicating that 40 per cent of Indonesian adolescents engaged in pre-marital sexual activity.

The law also impacts homosexuals as gay marriage is not recognised in Indonesia.

The code also establishes prison terms for those found to commit ‘obscene acts’, defined as violating norms of decency and politeness through ‘lust or sexuality’ for both heterosexual and homosexual people.

The new laws will also apply to foreigners. However, asked whether tourists in Indonesia could face jail for extramarital sex, Taufiqulhadi said: ‘No problem, as long as people don’t know.’ 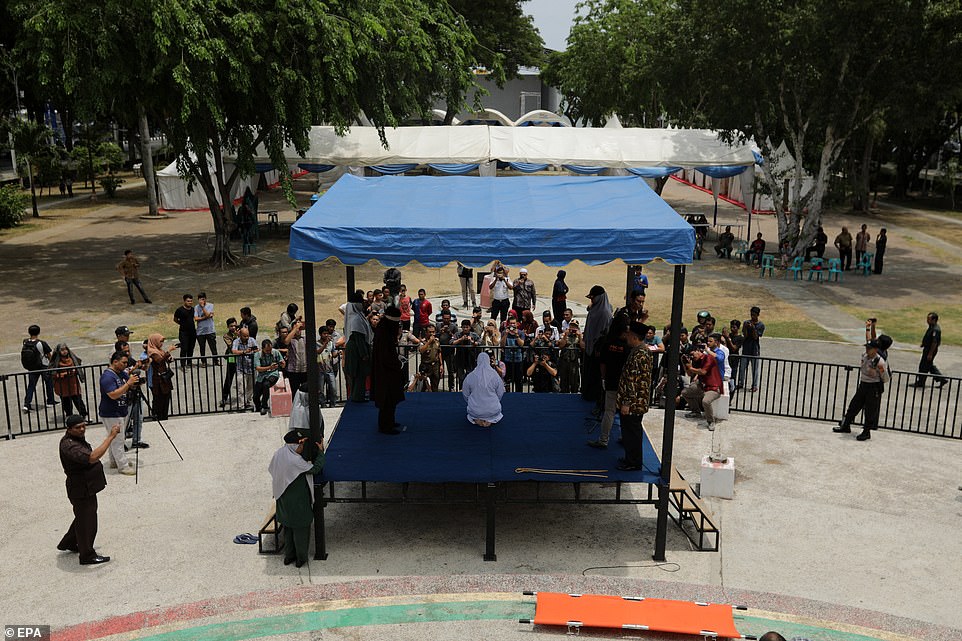 Floggings typically draw a crowd of observers, policemen, officials and media, many of whom film the beatings 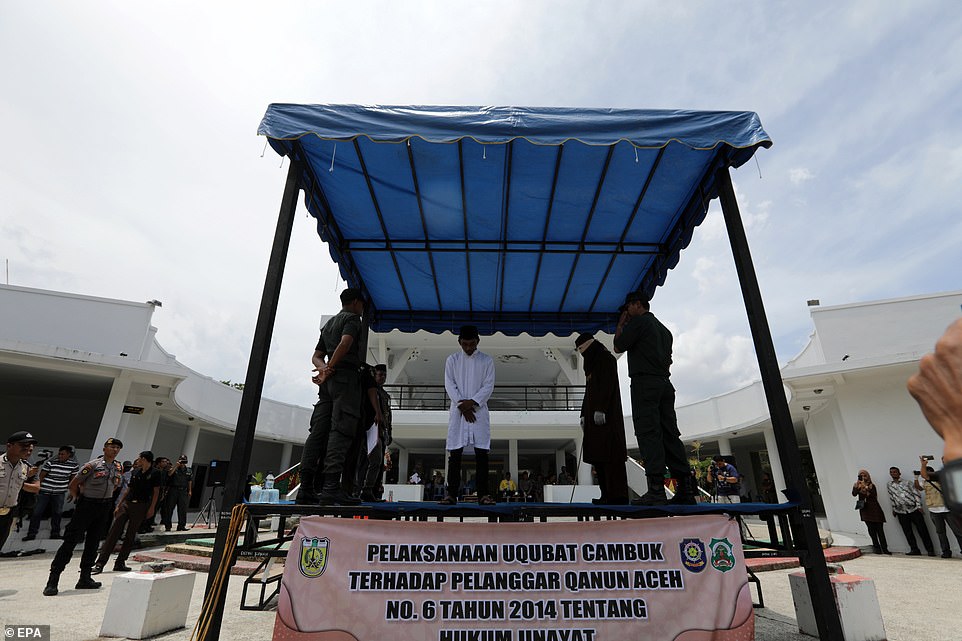 Aceh’s authorities say Sharia punishments are a deterrent to crime, and encourage people to watch them being carried out 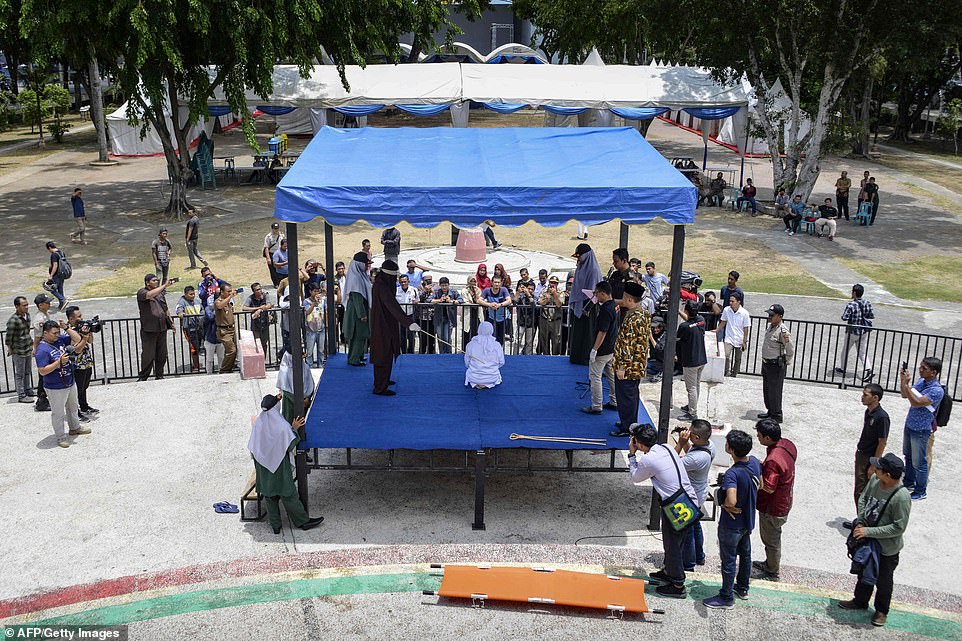 A trio of canoodling couples were publicly flogged in Indonesia’s Aceh province on September 19, charged with breaking local Islamic law that outlaws public displays of affection 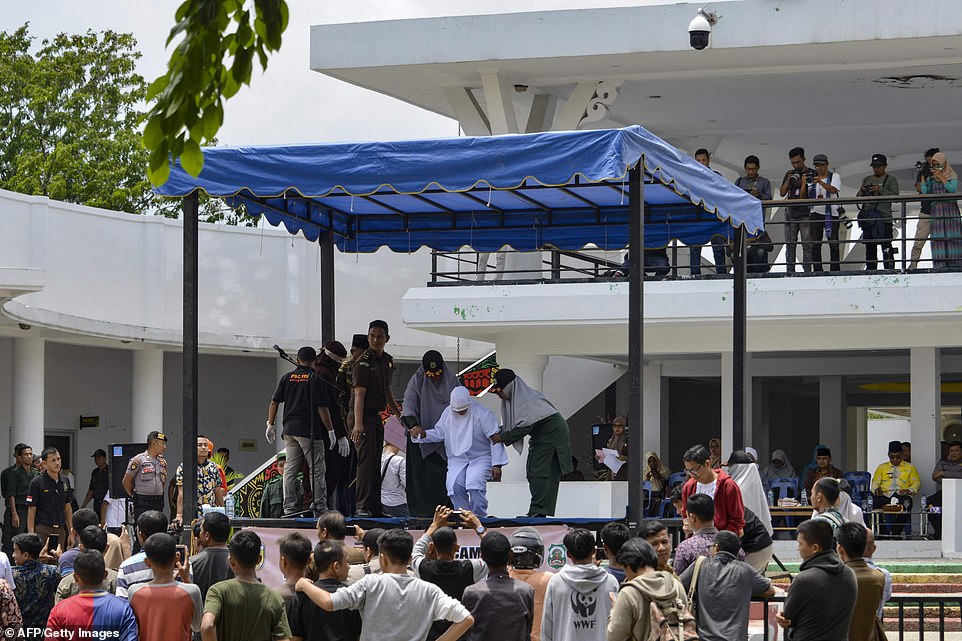 There would also be a maximum four-year prison term for women who have an abortion, applicable if there was no medical emergency or rape involved. The code further introduces fines for some people who promote contraception, and a six-month prison term for unauthorised discussion of ‘tools of abortion’.

‘The bill’s provisions censoring information about contraception could set back the progress Indonesia has made in recent years to dramatically reduce maternal deaths,’ Harsono said.

Insulting the government and state institutions also carries a prison term – which activists say could have an impact on press freedoms – a similar law was struck down by the Constitutional Court in 2006.

In a statement, Human Right Watch, said if passed the new laws would ‘violate free speech and freedom of association. The ability to engage in political speech, even speech espousing a peaceful political ideology that the government does not favor, lies at the heart of the democratic process.’